In spite of the obstacles and the glitches encountered by lawmakers so far, our insiders think the Legislature will finish the special session by endorsing the maps drawn for the 2012 elections by a panel of federal judges. But significant numbers think lawmakers will either draw new maps or end up doing nothing before the session comes to a close late this month.

If that last group is right, the insiders think Gov. Rick Perry will call lawmakers back for more work.

The timetable is starting to make some election officials nervous. The secretary of state’s office is telling lawmakers it needs maps by Sept. 1 to keep things on track, and in spite of the fact that the Legislature and the courts are still in the way and there are only three months left, most of the insiders are optimistic that deadline will be met. They’re a little less certain about the impact on next year’s primaries. The 2012 primary was pushed from March to May because of redistricting litigation, and a large number of insiders think delays are likely in 2014.

Who’ll get tagged if voters don’t like that? The Legislature, Attorney General Greg Abbott, and the federal courts overseeing it all.

As always, we collected comments along the way and the full set is attached; a sampling follows: 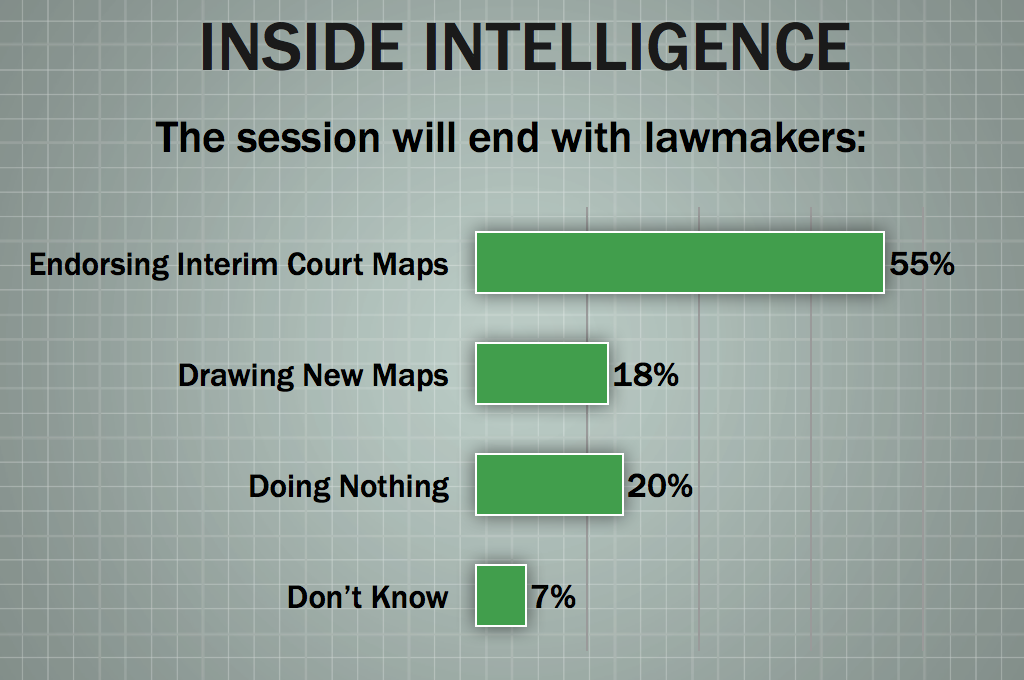 The special session’s redistricting work will end with lawmakers:

• "Once one district line gets moved, all bets are off (and the wheels with them)."

• "Why isn't 'Democrats take a summer trip to Louisiana' an option?"

• "Collapse. Melt down. The realization that Greg Abbott is not the smartest man in the room - and this from a Republican."

• "They are holding a 'road show' around the state over the next ten days to blunt the Democrats criticism of short-changing the normal process and citizen input."

• "Why travel all over the state if you are not going to do anything. They may not do anything meaningful, but they will do something." 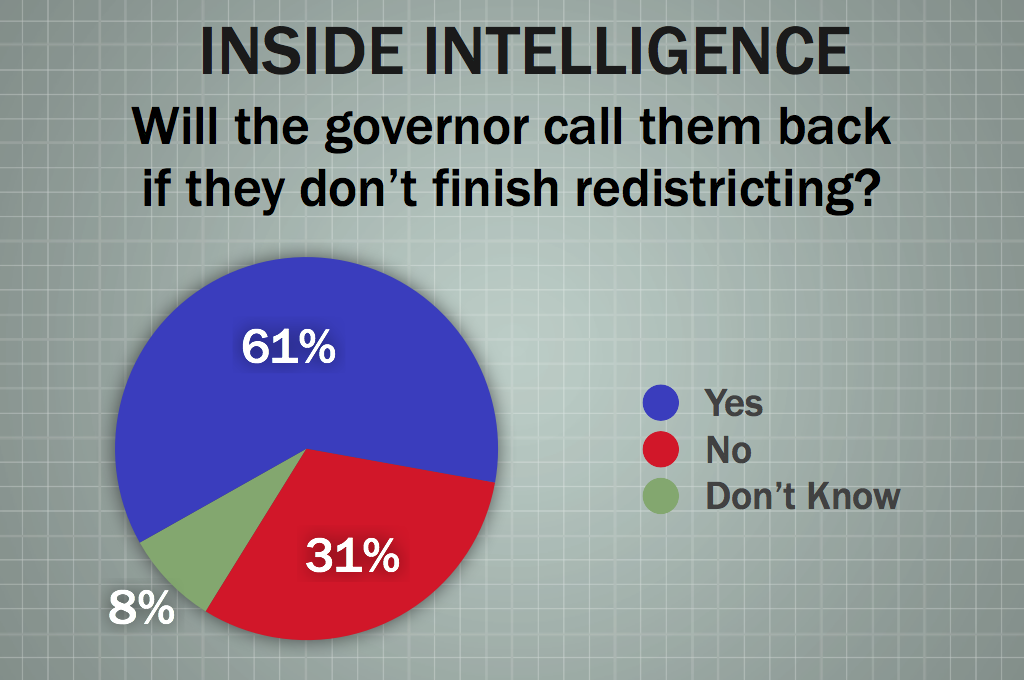 Do you think the governor will call another special session if lawmakers don't approve redistricting plans during the current session?

• "Do you think the Governor will accept defeat when he has the power to hold the Legislature hostage in perpetuity?"

• "Depends on why the maps might not be adopted--did they run out of time or were the votes not there? If it's a time issue, then yes, he'll call them back. If it's a numbers issue, then he'll have to reconsider. Who wants to risk association with two failed special sessions?"

• "Since they've only left themselves a week to get a bill through after their road show, it is likely they'll have to have more time." 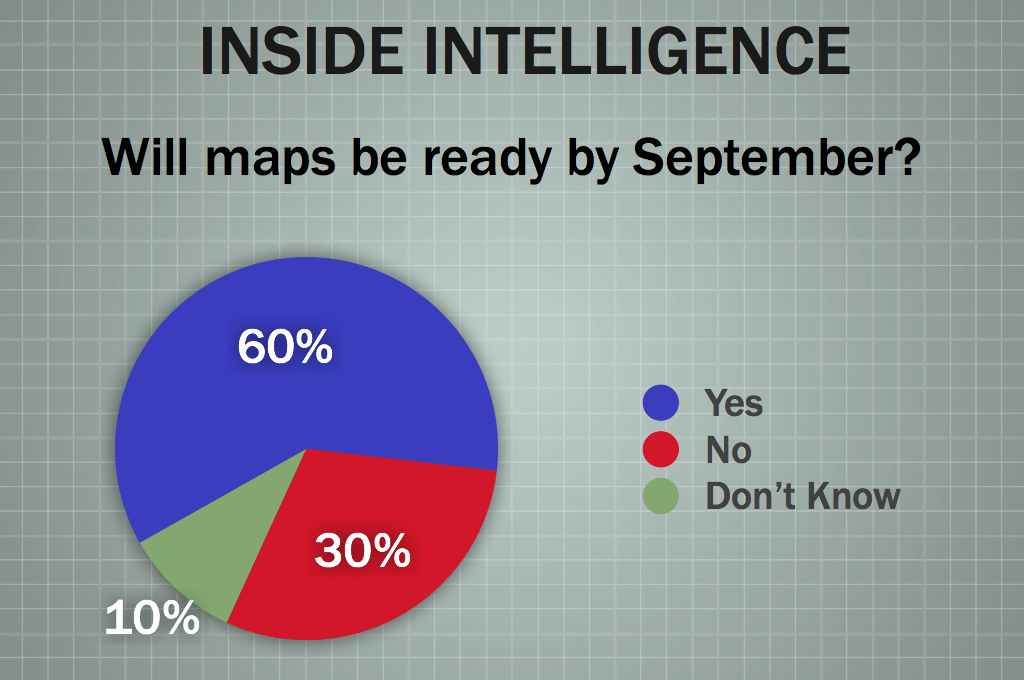 State election officials say they need final maps by September 1. Will maps be ready by then?

• "Temporary maps might be available by Sept 1 (either the current temporary maps ones or updated ones) but final maps seems very unlikely. However if the Legislature adopts any new maps this summer there is no scenario under which those maps will be ready by September 1, 2013."

• "We'll be in court far past that. They have already had 2 years and are no closer than they were at the beginning of the process."

• "The maps will still be under court review."

• "They will have maps in time to print ballots for a primary in March!" 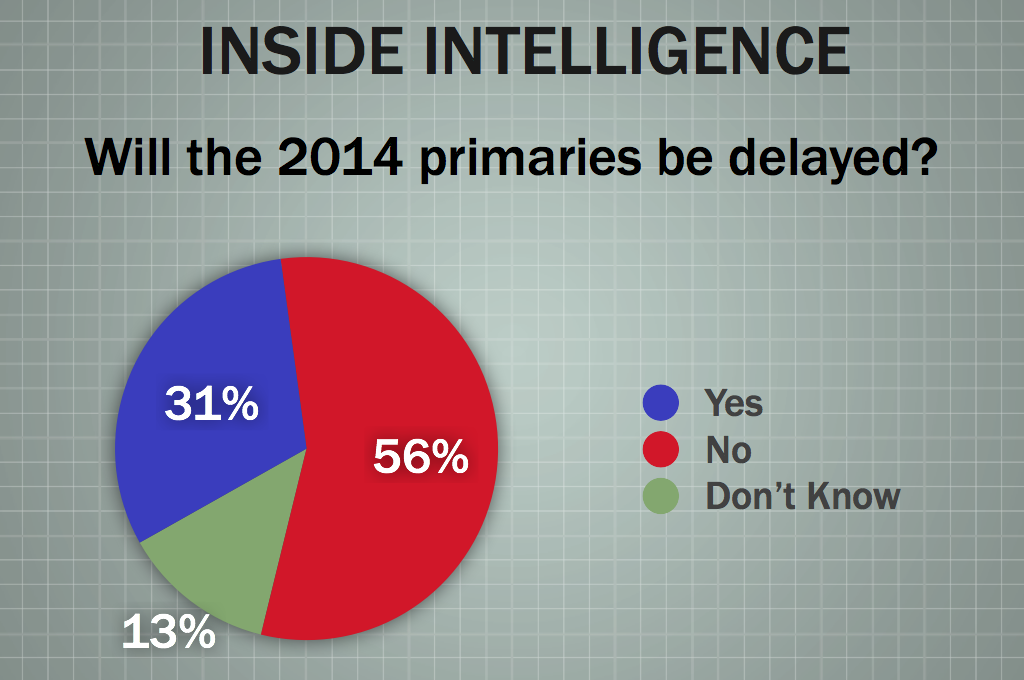 Do you think the 2014 primaries will be delayed by legislative and judicial work on the state’s political maps?

• "If they tweak the current maps at all, we can count on some court action that could result in delays."

• "Hell yes. The Ds want Texas badly. Obama and his people will use IRS tactics, AG spying on media tactics or whatever it takes to mess with Texas."

• "We will look at this question in the near future and realized you picked a bunch of dumb guys to participate in your Inside Intelligence. Maybe a few will get lucky and call it right."

• "Depends on whether Abbott learned from the last time that delayed primaries are dangerous business for established office holders."

• "NO ONE wants a repeat of the delayed primary/runoff! Ask David Dewhurst how that turned out for HIM last time!" 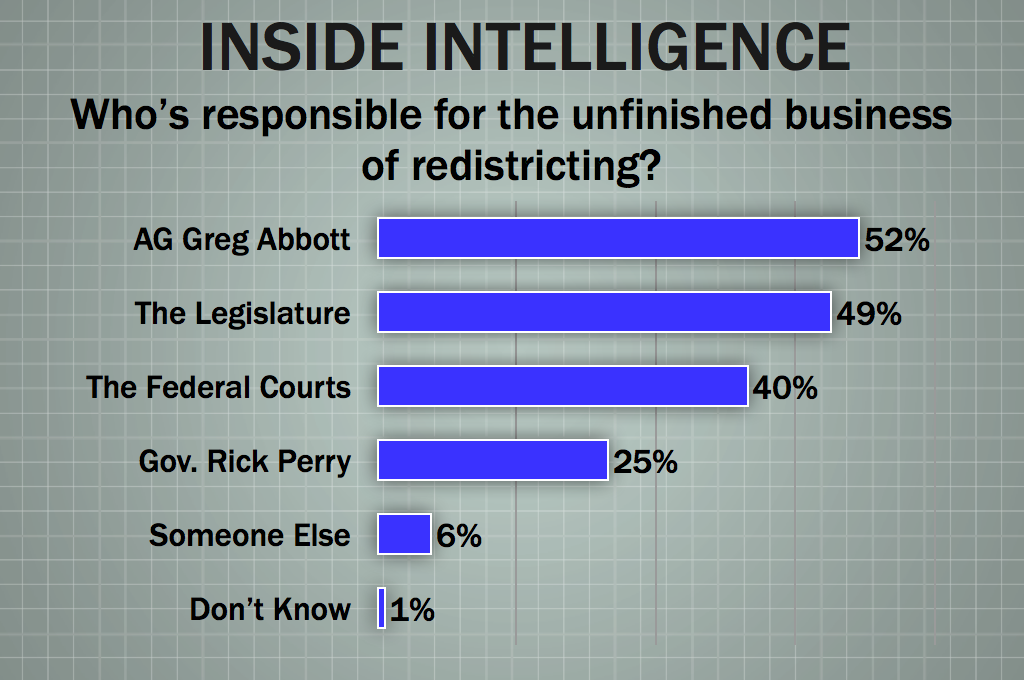 Who do you hold responsible for the unfinished condition of Texas redistricting? [Choose all that apply]

• "This is all about political posturing and partisan strength. Texas needs a redistricting commission, perhaps like Iowa, restriction on when and how many times redistricting can occur in a decade, and a clear statement about communities of interest attempting to prevent weirdly shaped districts which benefit only the politicians and not the citizens. It is time we again allow our citizens to pick their representatives instead of the politicians picking their constituents through gerrymandered districts."

• "Greg Abbott is responsible for the unfinished condition. Lots of other bit players in this fiasco, but the flawed legal strategy is his. And now he wants the legislature to hurry up and endorse court maps so he can devote himself full-time to running for governor."

• "The lengthy litigation is frustrating, but there are two pieces here. The 3-judge court in San Antonio is standard Voting Rights Act stuff - and is the same process from 1990's when minority party Republicans challenged the Richards/Bullock maps. On the other hand, the DC court has made legal rulings that could never have been predicted and that are not supported by statute or prior case law. Texas is right to appeal those unjustified rulings for as long as it takes to overturn that naked judicial activism by the DC judges."

• "I wish 'the process' was an option. This is ridiculous. Appoint an independent commission, ignore incumbency, make the districts 50/50."

• "Republican partisans not remembering that pigs get fat but hogs get slaughtered."

• "The Redistricting Narrative is being driven by the Democrats. They believe that portraying Republicans as racist is a good message for them -- this is one of the few opportunities they have to get their name in the paper. TMF gets to sound off all the time and pretend he is relevant."

• "Abbott has fumbled this issue miserably. In an attempt to put this issue behind him and ramp up his political machine for 2014, he's put Republican legislators in a no-win situation and will likely try to place the blame on Speaker Straus and Lt. Gov. Dewhurst - all while costing tax payers millions of dollars to be subjected to another month of Kabuki Theater."