Asked to grade the state’s top three leaders, the insiders gave House Speaker Joe Straus a solid B, handed Gov. Rick Perry a C-, and gave Lt. Gov. David Dewhurst, on average, a D. Each had his fans and detractors: 42 percent gave Dewhurst a C or better; 57 percent did that for Perry; 93 percent gave Straus an A, a B or a C.

The Legislature itself got decent grades, landing an average right between B and C and getting Cs or higher from 87 percent of the insiders.

The insiders don’t expect the kind of turnover that put 44 fresh faces in the House and 6 in the Senate this session. Most — 65 percent — think between 1 and 3 senators won’t be back for more in 2015; 58 percent think the House turnover will be somewhere between 11 and 20.

We asked about heroes and goats in a comment question, and the full set of responses to that — and comments on the other results — is attached. Here’s a sampling: 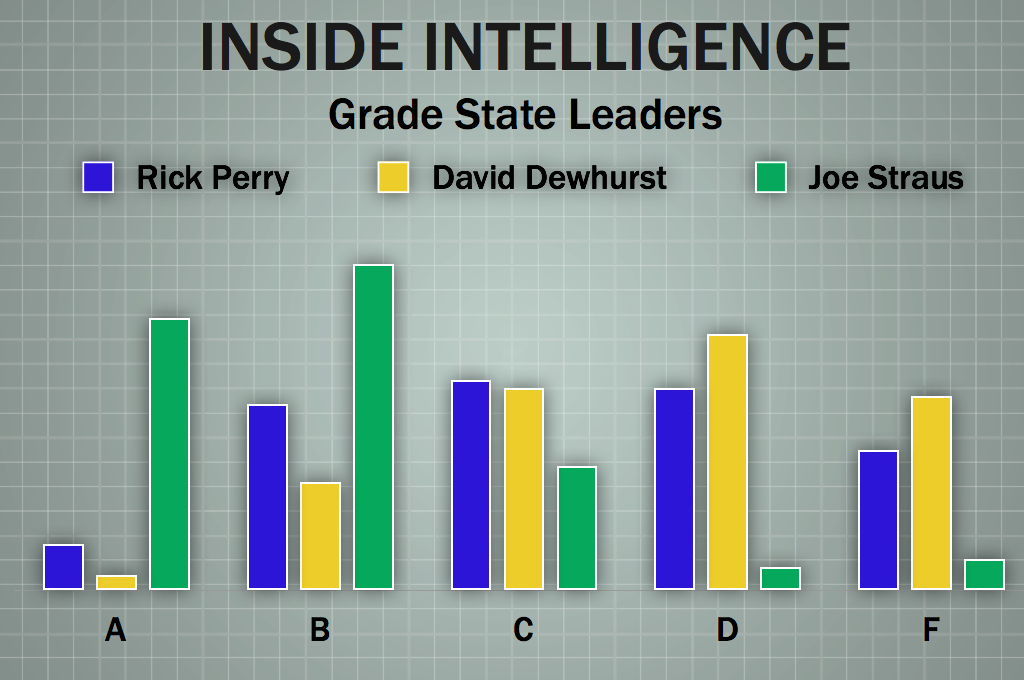 How would you grade these state leaders this session?

• "Perry gives a speech in January, disappears, and then makes demands with a couple of weeks to go. Real leadership right there! <end sarcasm> Also, not very transparent in doing the bidding of/protecting MQS's group."

• "Governor Perry is a shadow of his 2011 self. The oops debate has haunted and will haunt him until he hangs up the spurs. David Dewhurst's special session plea for conservative relevance came off as too little too late."

• "You left off the two real chamber leaders this session: Dennis Bonnen and Kevin Eltife. Both get an A."

• "Straus is the weakest speaker in recent history. I guess that's what we get for a man who ran on bowing down always to 'the will of the House.'"

• "The Governor and Dewhurst are so over. Gentlemen, please retire! After this session, what could they possibly be clinging too? Can it be that much fun riding around in black SUV's? Meanwhile, the Speaker continues to pretend that there is still a country club wing in the GOP. Although beloved by the press -- he squandered his good PR capital, offering no leadership or vision on anything -- budget, education, transportation, water -- nothing. Nice man. What a waste."

• "Straus's style may be too hands off for some people, but he let's the House be the House. He may be as good as Pete Laney."

• "Mr. Perry's usefulness as the state's chief executive has reached its limit. Dewhurst may be the worst Senate President in modern history, and Straus - well he looks OK compared to Thing 1 and Thing 2." 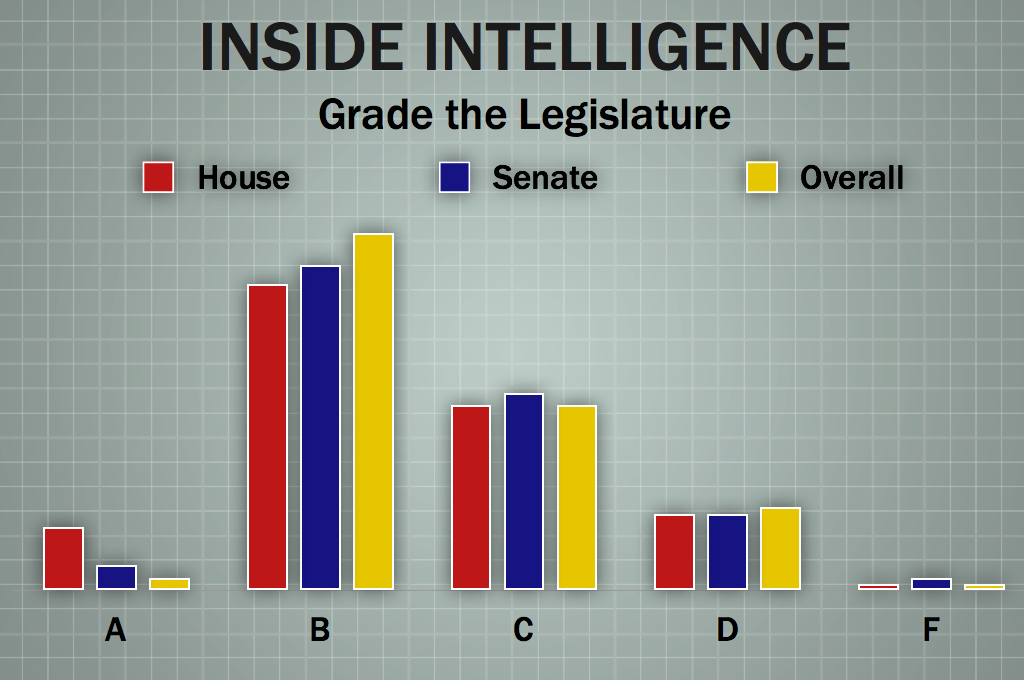 How would you grade the Legislature?

• "With a few failures (e.g. transportation funding), they addressed the matters they needed to address, handled the available resources reasonably well, and did so in a much more collegial atmosphere."

• "The freshmen and sophomores filed good bills, but Straus' leadership didn't let them see the light of day. Dewhurst was supposed to prove his conservative credentials, but bills including the budget proved quite the opposite."

• "Tax cuts: check. Water funding: check. Restoring education funding: check. Balanced budget: check. Hard to argue with the end result, though it was sloppy getting there."

• "For having a bunch of money and, thus, a pretty easy go of it, the session was mediocre and forgettable."

• "It takes real leadership and courage to go from one of the most combustible sessions in our history to one that ran fairly smoothly."

• "Generally, a pretty common sense legislature. Their inability to 'get' that the public wants them to reform themselves is the only thing holding them back from an A."

• "Both bodies acted like adults, and managed to do their jobs without drama. One of best sessions in recent years." 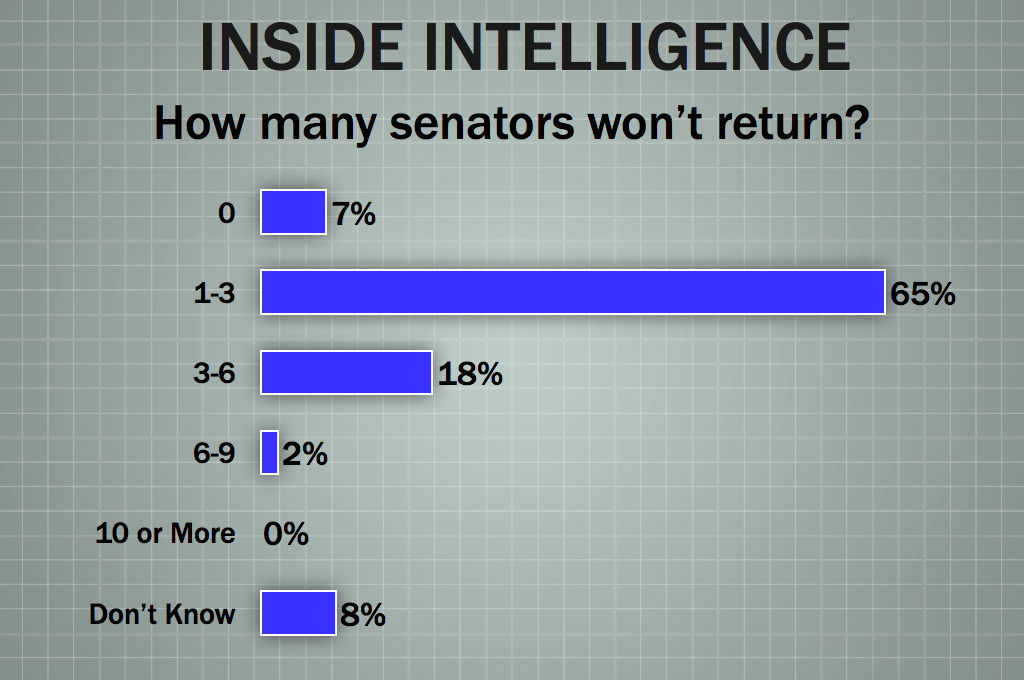 How many members of the Senate will leave or be replaced in the next election cycle?

• "At least 2 Senators plan to run for statewide office."

• "Turn over is real and we do not need term limits. If people actually did the homework and math they would see that there is a consistent turn over rate."

• "Patrick and Hegar will try to move up. I could envision a retirement."

• "Adios, Senators Davis, Campbell, and maybe Hegar, who will be a great Comptroller."

• "Lots of folks with aspirations for statewide office."

• "San Antonio is calling they want their Senator back." 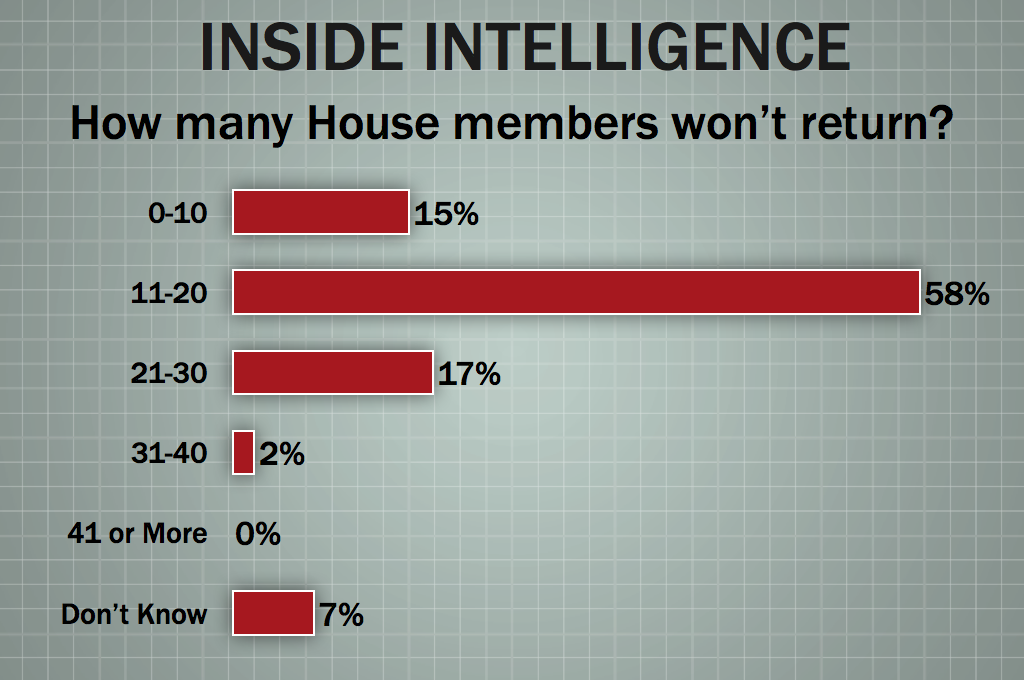 How many members of the House will leave or be replaced in the next election cycle?

• "If any of the incumbents were going to be replaced they would have been last time. A few of the freshman will get beat. There will be very little turnover"

• "Lots of primaries and cardinals retiring."

• "This is a great ending session for many members, with a budget surplus and water funding taken care of. Why not call it quits and stop being hassled by the fringe on either side of the aisle?"

• "The good ones are tired of waiting for a chance to move up within the Capitol, so they head for local positions where they can actually get something done. E.g. Mark Strama."

• "Depends on what happens with redistricting"

• "Normal attrition. This session was relatively pleasant, and not apt to drive excessive retirements."

• "Jimmie Don Aycock was a goat. Dan Patrick a hero."

• "Freshmen and sophomores were the heroes. The goats were the leadership and their lieutenants."

• "Jim Pitts is the Hero, but then again he seem to always be, What’s up with Tommy Williams? He is spending every dollar in sight."

• "The Geren/Seliger bill was an embarrassment."

• "Heroes include Dennis Bonnen, who really ran the House and kept the members going, and Tommy Williams, who exercised patience and problem solving. Goats have to include Sen. Davis and Rep. Wu (seriously, we don't need your comments on every bill) and Rep. Creighton, who did almost nothing to help leadership."

• "Hilderbran showed he can move major legislation, unorthodox though his style may be. Ellis flubbed his chance to knock over the apple cart on HB 500. Van Taylor, Stickland, and Simpson were the sad clowns of the House."