For this week’s nonscientific survey of insiders in government and politics, we asked about the clout of partisan groups in the Legislature, about the biggest issues left undone and about how we’ll remember this group of lawmakers.

The power shifts in the Legislature from session to session and as the 83rd regular session draws to a close, we asked the insiders about the clout of the biggest partisan groups in the House and Senate, about the biggest issues left undone and for their ideas about how this particular group of lawmakers will be remembered.

The short form: The Tea Party wing of the GOP is weaker than it was two years ago, in the eyes of the insiders, the moderate wing of that party is stronger, and the Democrats are either unchanged or stronger.

The answers to the other two questions were all over the board, as you can see from the attached full set of comments. Cut them some slack — they answered these questions with a week still left in the session. A sampling of their responses follows. 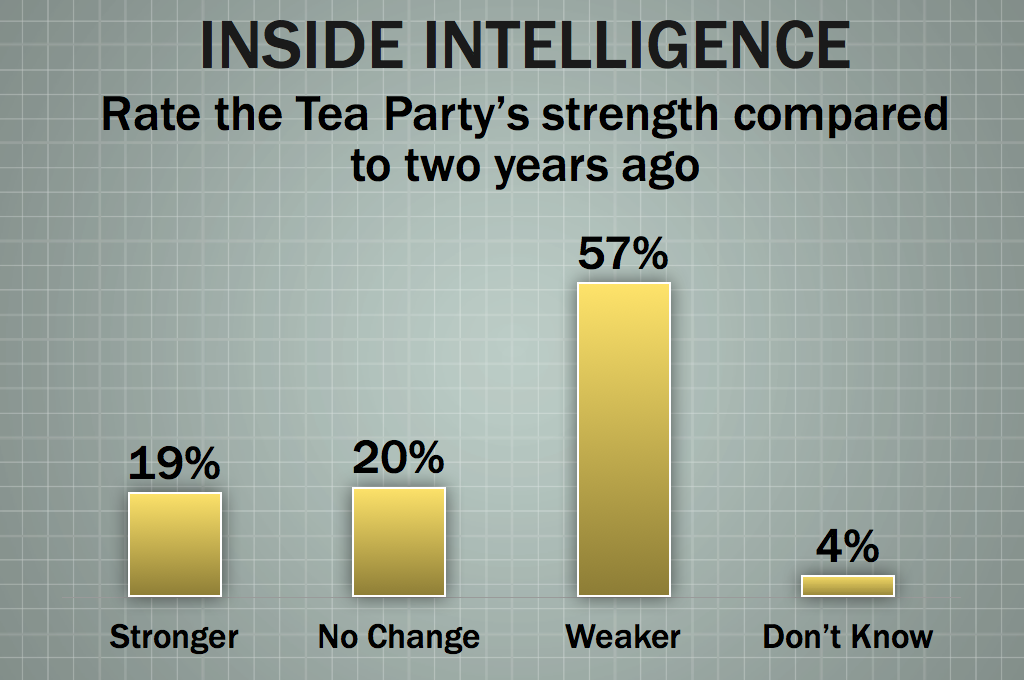 How does the influence of the Tea Party wing of the GOP in the Legislature compare to two years ago?

• "Without occasional confluence with Ds not sure what victories they have to show for their efforts."

• "They seem to have the allegiance with the Democrats on issues but for different reasons. Dewhurst is heavily influenced on legislation by tea party's perspective."

• "There is no place to check 'different.' Hard-wired conservative principles continue to dominate the GOP - but the TEA Party has matured, sobered by Obama's re-election. They Texas TEA Party folks are focused on their roots -- fiscal conservatism, small government, etc. They've mostly stayed on track this session -- which makes them a bit stronger,"

• "Look not further than the rebellion over the Medicaid language and how fast it was pulled when the freshman republican members threatened to vote no."

• "The Tea Party is the number one reason the Ds have any power this session. By creating a three-party system on the floor, the Tea Party gave the minority Ds control of the balance of power. So that's strong influence, although not for them"

• "Not sure how much 'tea party' is a correct description, I think that there are a lot of Repub party primary issues that get attributed to tea party, but are more traditional primary faithful issues than tea party."

• "Stronger - but not by much. There's a core group of conservative House members (8-10) but that's really it."

• "They are more organized and coming after the moderate Repubs this next election."

• "I say overtly weaker but I have sensed a little stronger undertow this session than the rabble-rousing from last session." 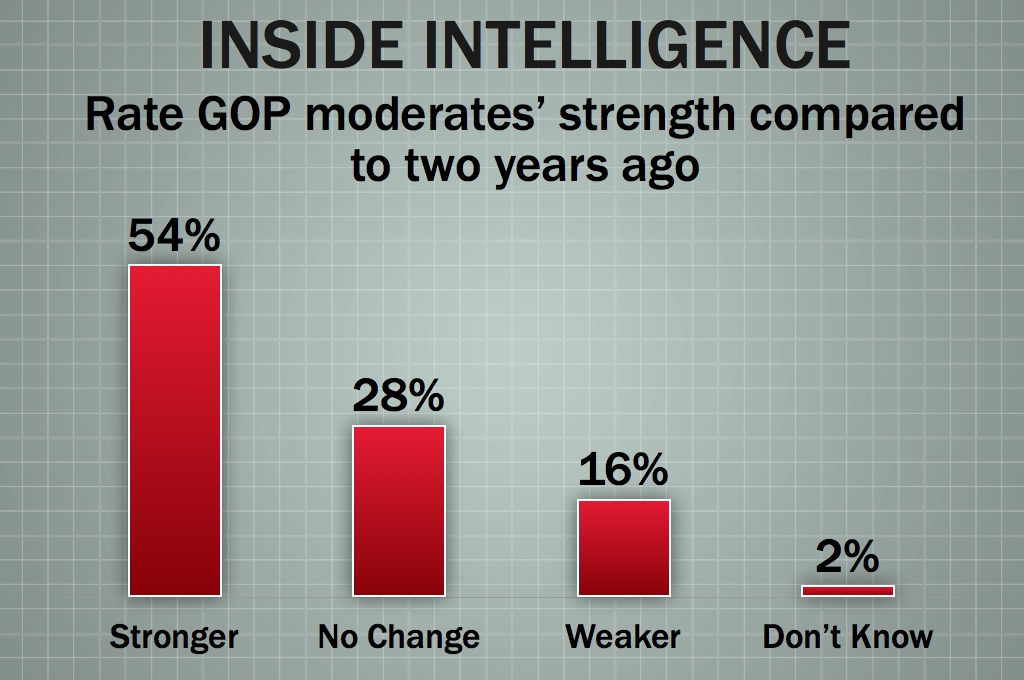 How does the influence of the moderate wing of the GOP in the Legislature compare to two years ago?

• "Actually understand that they are elected to work with others to confront state challenges. Always have to be watching the bomb throwers in their own party."

• "The center is holding"

• "They are afraid to get out in front on high-profile issues, since if they have to go moderate to get it passed, they risk being primaried, but if they move to the right to get votes there, they lose their identity."

• "What is the moderate wing of the GOP? Best I can tell, even Phil King is no longer conservative enough for some."

• "The moderates are stronger to the extent that Straus has consolidated power in the House. It bears mentioning that 'moderate' is also a relative term in the bizarro world that is the Texas Legislature."

• "Definitely stronger but I believe the moderate wing has been pulled somewhat to the right." 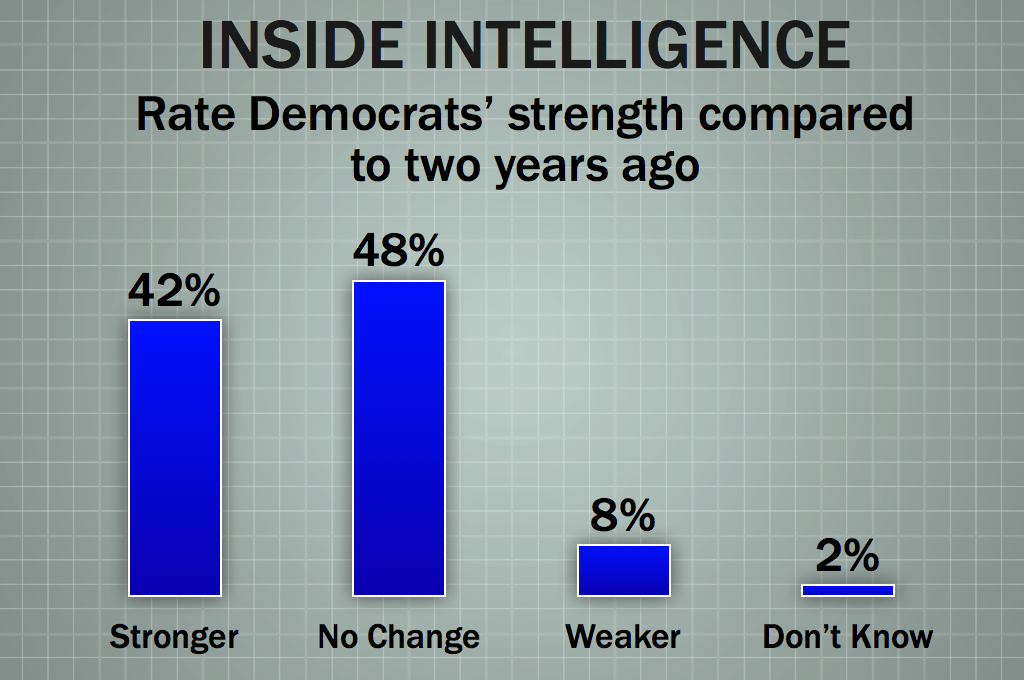 How does the influence of the Democrats in the Legislature compare to two years ago?

• "I believe TMF has had a good session. He has learned how to govern by deal making and has kept an open line of communication with those in power."

• "Dems are still forced to use the rules since they do not have the numbers. However, they have been helped by the moderate R's often."

• "Who? No, give them props for the budget play. Even if it doesn't hold."

• "Much calmer atmosphere but the combination of the libertarian freshman with D's gives them have more impact."

• "As long as Straus is Speaker, they'll stay stronger than their numbers."

• "Really only stronger in the context of being smarter, thereby accomplishing their mission with much less visibility. Seems that there was a deal with leadership to keep bad stuff off the floor if the demos were willing to get along. And it has worked as far as I can tell. The difference between TMF and Jessica, et al on the mic this year and last is huge. But the difference in what has been allowed to get to the floor is likewise substantial. Basically, no controversy in legislation, then no controversy over running the house."

• "The budget demands that the Ds have been able to pull off are impressive considering their inferior numbers."

What’s the biggest issue this Legislature should have addressed and didn’t?

• "Education is NOT fixed; it has NOT been improved in the slightest. We simply MUST get a grip on our educational system and how we plan to educate our work force in the future."

• "The acceptance of funds for Medicaid expansion under Obamacare"

• "Transportation and Medicare--two big issues they utterly failed at solving"

• "School vouchers. The Rs will never have this advantage again, so that ship has sailed for good."

• "Railroad Commission Sunset - They can't address an agency that brings in billions of dollars to the state?"

What do you think this Legislature is going to be remembered for?

• "Having not acted on critical infrastructure needs when there was available revenues."

• "It's successes and its failures to address long term state problems that threaten the states attractiveness to new business expansion and growth."

• "I don't know but I wish I could forget this Legislature."

• "Who remembers any legislature except for us junkies?"

• "By the outsiders: water funding; by the insiders: the session that we didn't have a lt. gov."