SAN ANTONIO — Ray Gutierrez’s green eyes twinkle and his cheeks dimple with a shy smile when he looks across the table at Evita Morin, the former intake worker at Haven for Hope, who he said helped save his life.

“I probably would have been dead now,” said Gutierrez, 61, a recovering alcoholic. “I was helpless.”

Haven for Hope in Bexar County is a 20-acre community that provides services, shelter and safety to people who are homeless or nearly so. Working with dozens of government agencies, nonprofit organizations, mental and medical health providers and religious groups, Haven helps people like Gutierrez make the transition from the street to a healthy home and a job.

For the first time since state lawmakers made historic budget cuts a decade ago, legislators are dedicating hundreds of millions more dollars to mental health care. Haven serves as a model of the services and success they aim to accomplish.

“It is a place of hope and new beginnings,” said Morin, the former intake worker, who is now Haven’s vice president for community and external affairs.

As Republicans and Democrats in the Texas House and Senate hash out the details of the state’s 2014-15 budget — there are fights over water, roads and education — one issue they are not arguing about is support for mental health.

“One thing we could all agree on was mental health was, to a large extent, a driver of crime,” said state Rep. John Zerwas, R-Simonton.

In the wake of mass shootings like the December tragedy at an elementary school in Newtown, Conn., lawmakers disagreed vehemently about addressing gun laws. But legislators in both parties acknowledged that Texas should raise itself from its position at the bottom of the heap in spending for mental health services.

From 2006 to 2009, Texas ranked last in the nation in per-capita spending on mental health services, according to the Henry J. Kaiser Family Foundation. In fiscal year 2010, Texas spent $39 per capita and moved up a couple of spots from the bottom of the list. By comparison, Maine, near the top of the list, spent more than $300 per capita.

For years, mental health advocates have urged lawmakers to spend more on mental health care to prevent people who suffer from psychiatric illnesses like bipolar disorder and schizophrenia from winding up homeless or in jail or a public hospital. In 2011, sheriffs across the state asked legislators to finance community-based treatment programs to keep mentally ill Texans out of their jails. Houston’s Harris County Jail has become a de facto state hospital, Sheriff Adrian Garcia has said, where psychotropic medication is needed for 2,000 inmates a day. 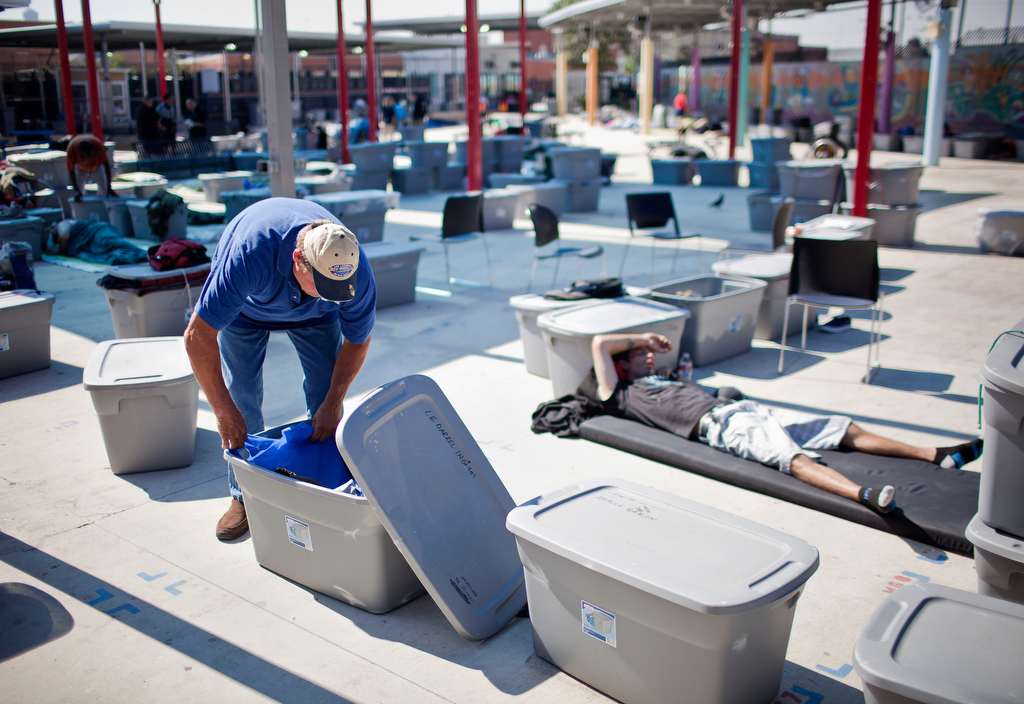 Enlarge photo by: Tamir Khalifa
Lee Ingram, of Jacksonville, Florida, sorts through his belongings at Prospects Courtyard, an outdoor sleeping area for homeless men and women. Ingram said he left Florida after a divorce and is staying at Haven for Hope until he finds a stable job.

State Sen. Joan Huffman, R-Southside Place and a former prosecutor and criminal court judge, said lawmakers in both parties realized this year that the state had reached a critical juncture.

“At some point it’s really inexcusable, and you have to do something about it,” she said.

This year, lawmakers had money to do something about it, said Zerwas, an anesthesiologist who sits on the House Appropriations Committee. In 2011, lawmakers faced a budget shortfall some estimated to be as high as $27 billion. Now, budget writers are working with a surplus estimated at about $12 million.

Lawmakers have agreed to put $1.77 billion into mental health care, an increase of $259 million over the previous biennial budget.

“It’s been a truly transformational amount of money,” Zerwas said.

Among the allocations, lawmakers are setting aside $57 million more to eliminate waiting lists for mental health services for children and adults. An additional $25 million will finance grants to local mental health authorities and crisis programs. Roughly $10 million more will go to substance abuse treatment.

To get a better idea about how state dollars should be invested, Zerwas and a bipartisan group of lawmakers toured Haven for Hope this year, a visit he said had a dramatic impact.

Brightly colored butterflies on murals that decorate the buildings leading into the gated Haven represent its mission of transformation.

Haven opened in 2010 after an infusion of money and a fundraising effort by a local business leader and a push from former Mayor Phil Hardberger of San Antonio to address the city’s homeless population. It has annual revenue of about $15.5 million, and nearly $1.6 million of that comes from state financing.

“You need to have some investment from your community,” said Mark Carmona, Haven’s chief executive. “It can’t be completely government-backed.”

The campus includes an intake center and mental health and medical clinics. A converted warehouse houses dozens of offices for nonprofits. About 790 residents live in barracks-style dormitories for men, women and families.  Prospects Courtyard provides a safe outdoor sleeping area for more than 500 homeless people.

“If this is where you want to be, we’re perfectly okay with that,” Morin, the social worker who worked with Gutierrez, said as she stood inside the courtyard.

Gutierrez came to the courtyard last year. He was almost completely blind, his eyes shaded by cataracts exacerbated by years of heavy drinking.

“I feared,” Gutierrez recalled. “I was afraid of getting robbed, beat up.”

Haven found doctors who performed surgery to restore Gutierrez’s sight. He now lives in a dorm for recovering alcoholics, and staff members are helping him find a job as a dental technician.

Morin becomes emotional when she talks about Gutierrez’s progress.

The homeless population in San Antonio has fallen about 80 percent since Haven opened in 2010.

In the first year it was open, there were about 5,000 fewer bookings at Bexar County Jail. The organization estimates its services saved about $50 million that would have otherwise been spent in local jails, emergency rooms and courtrooms.

Carmona said Haven’s success results from its focus on the root causes of homelessness — usually mental illness, drug abuse or a combination.

“I’m not looking a gift horse in the mouth,” Switzer said. But she said that in light of how quickly the Texas population is growing, the financing “doesn’t even bring us up to the median.” 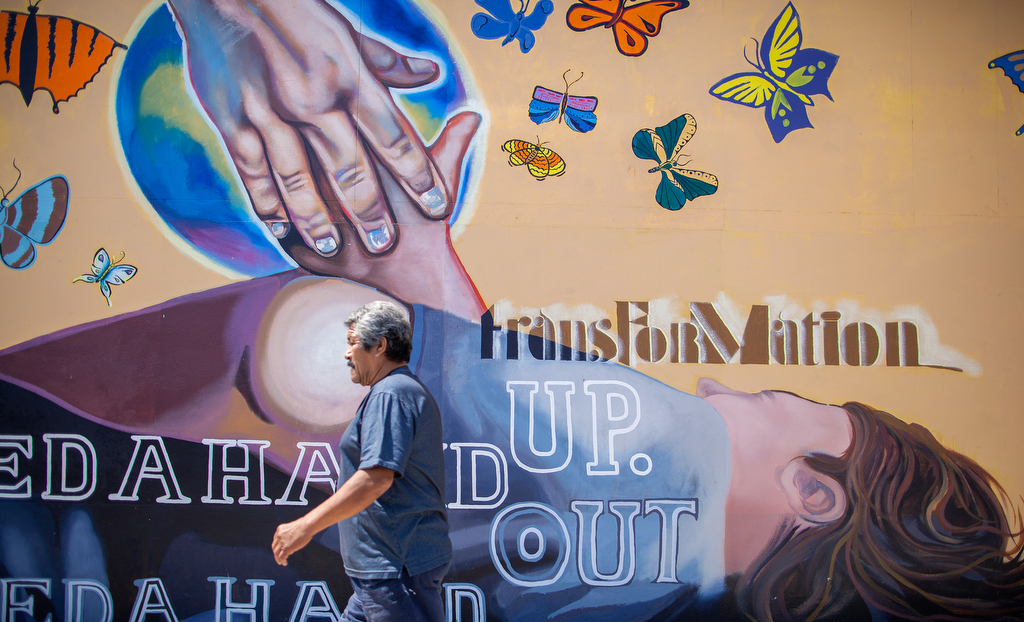 Enlarge photo by: Tamir Khalifa
Isaias Garcia, 60, passes a mural at Haven for Hope of Bexar County, a community-based mental health care provider and transformational center for homeless men and women. It has been discussed among lawmakers as a model for providing mental health care across the state.

State Rep. Garnet Coleman, D-Houston, understands the need for improved mental health care in Texas perhaps better than most lawmakers. He was diagnosed with bipolar disorder, and since taking office in 1992, he said, he has pushed his colleagues to increase financing.

This session was different, Coleman said, because more legislators have a better understanding of mental illness. The shooting at Sandy Hook Elementary, he said, struck a nerve “with every parent, every grandparent, that we must do something about this.”

“I’m not so sure that this is the answer," Coleman said, “but if it saves one life then that’s good enough for me.”