It’s the first week of May — as one insider pointed out, the peak season for speculation about special legislative sessions. That’s what we asked about this week, and that observation might be correct: 39 predict special sessions this year; 22 percent expect them in 2014; 26 percent expect special sessions both years. Only 10 percent said there won’t be extra time for lawmakers.

Overall, 55 percent expect more than one special session between the end of the regular session later this month and the start of the next one in 2015. The leading candidate is school finance, now tangled in state district court and on its way to an expected appeal to the Texas Supreme Court. Smaller numbers — 51 percent and 50 percent, respectively — expect sessions on redistricting and budget issues like water and transportation.

We gathered comments along the way, as is our habit, and the full set is attached. A sampling follows: 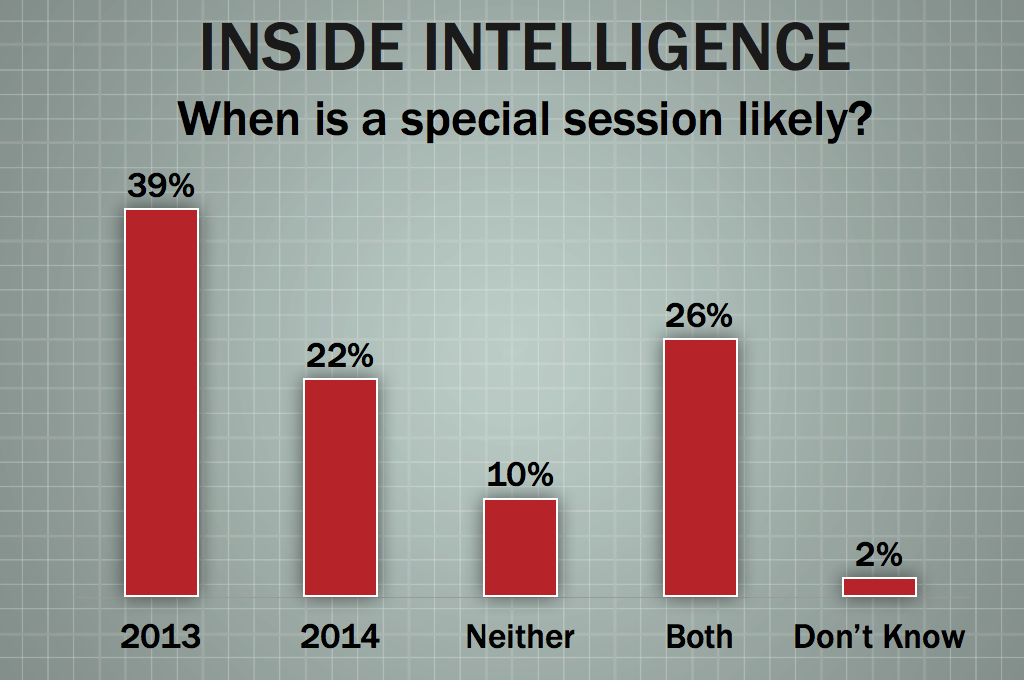 When do you think a special session is likely in the next two years?

• "The Governor's infrastructure priorities will need to be addressed this year. Once the US Supreme Court gets the Feds off of our backs, redistricting will be dealt with in 2014."

• "The first session will be called this summer to shore up the Perry agenda - why Perry slept until April, we don't know.  The second special will be called in 2014 if we lose school finance in court."

• "Education Equity will be after the Primary Elections in 2014.  Redistricting will be in 2013."

• "Rick Perry has a presidential campaign to run. Ain't nobody got time for this!"

• "If the Legislature takes care of business, there won't be a need for a special session until the Texas Supreme Court rules on public education funding, and no one knows that timeline."

• "The lemming wisdom says post-primary 2014 to deal with school finance. But what if the Texas courts give the Legislature a pass on school funding after this session's comparatively paltry restorations?" 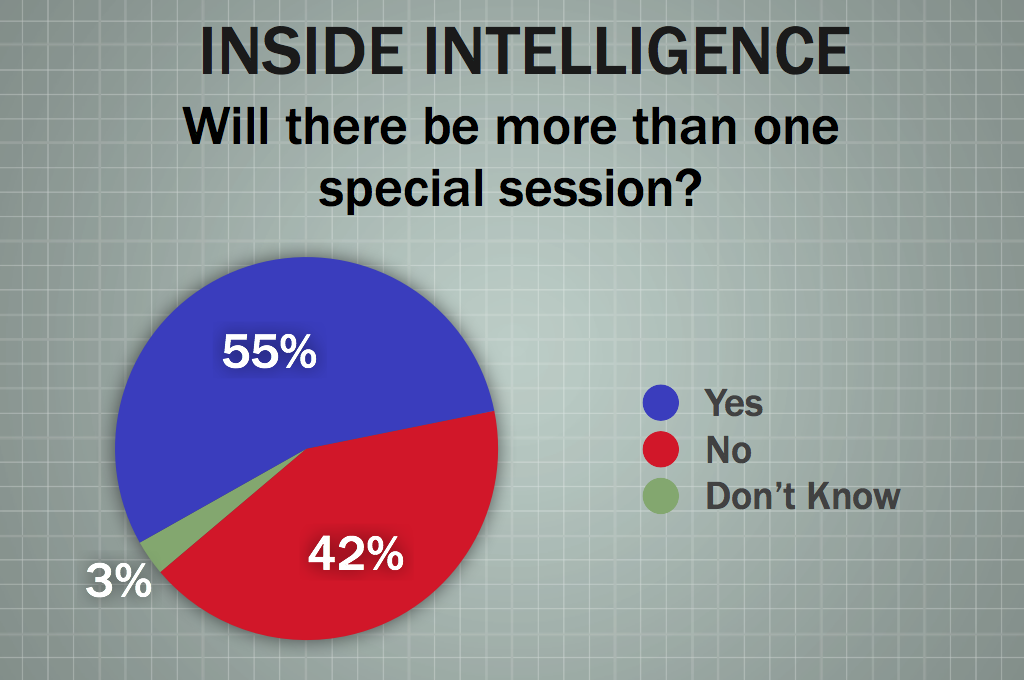 Do you think there will be more than one special session?

• "There will be more than one special session unless the Legislature gets reasonable on their water plan very soon.  Also, redistricting is a given."

• "We Texans always appreciate water more during the summer." 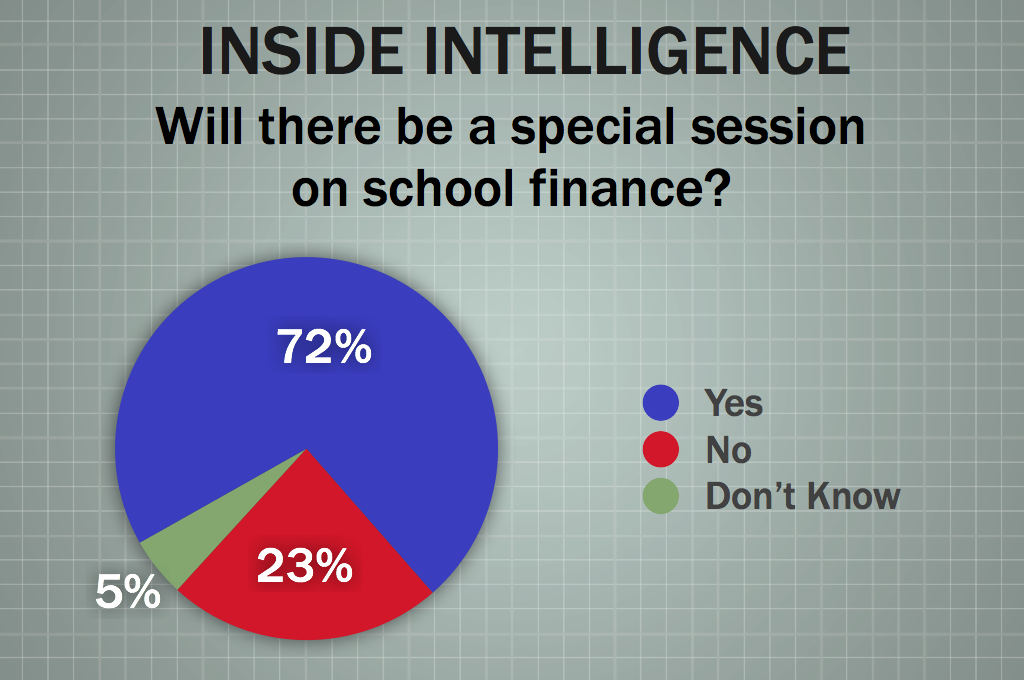 Do you think there will be a special session on school finance?

• "Timing will depend on when the Court weighs in."

• "We'll be in session on school finance only if we lose at the Supremes."

• "The schedule has been pushed back too far.  Dietz needs to have an evidentiary hearing on the finance changes made in the session, then has to write an opinion.  By the time the appeal is filed, briefs are written, oral argument is held, and the Supreme Court issues an opinion, it's way too late for a special in 2014."

• "Yes, but it will be a bargaining chip to get the water bill moving."

• "Unless 'they' think it can wait til 2015 I don't see any other way of getting to fixin' school finance." 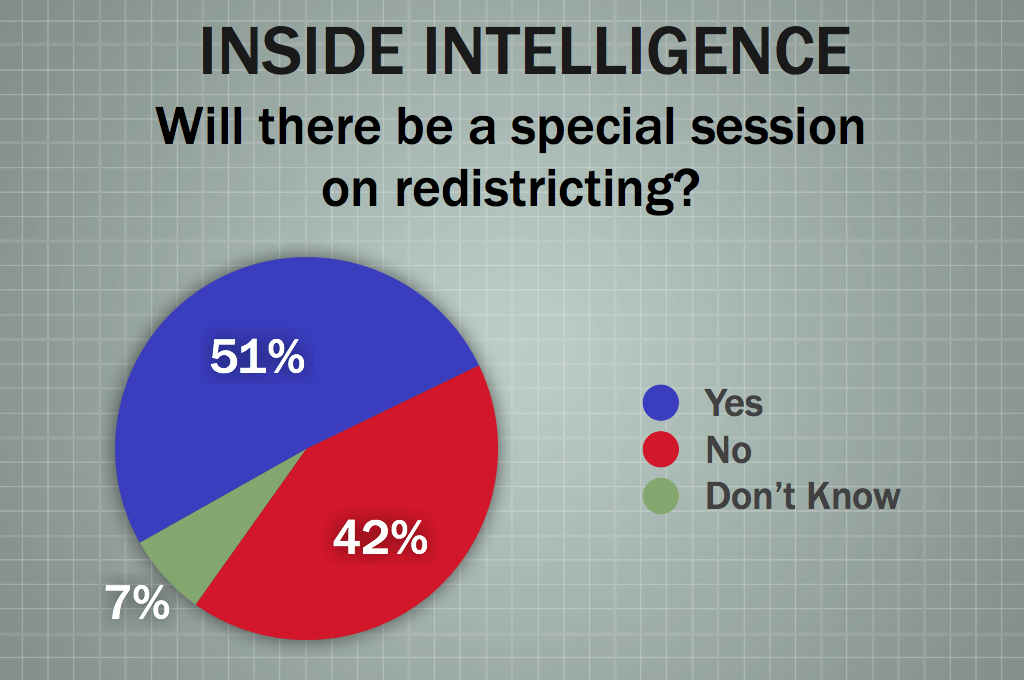 Do you think there will be a special session on redistricting?

• "Once the Supreme Court gives Texas the autonomy it deserves, expect the Republicans to take care of redistricting."

• "We all know Gov. Perry is the only person who can call a special session.  The courts can't make him do it, and I don't see him bending to the will of the courts.  If there's an issue with the maps, it'll be resolved by the courts or it'll be resolved in 2015 during the 84th Regular Session."

• "The clock is ticking. Well, it is really not. It's going to be a hot summer at the capitol."

• "Add it to the water session" 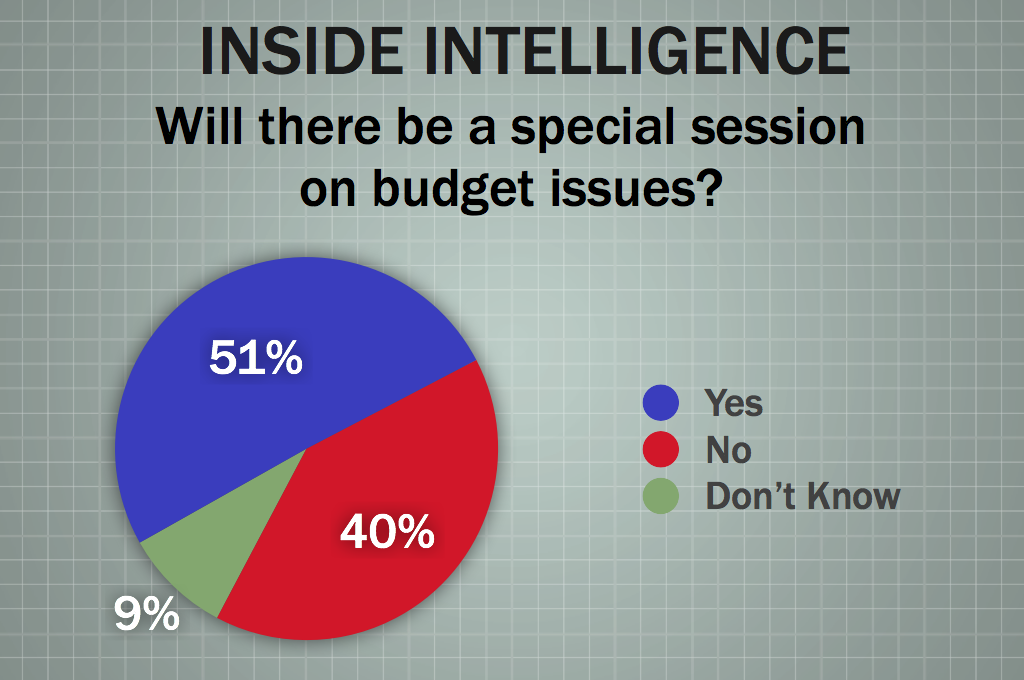 Do you think there will be a special session on water, transportation or other budget issues?

• "If they fit the profile of the unsatisfied Perry agenda, then yes, we could have specials on any of these issues.  Probably in short order."

• "If TWIA or water don’t get done, then those two issues should be on a call."

• "It depends on how creative the members and the leadership get in the waning days of the regular session. It also depends on whether the Republicans will loosen the purse strings for education. As Whitney sang, 'I believe the children are our future. Teach them well and let them lead the way...'"

• "Deadlines encourage compromise.  There will be a deal."

• "Don't ask me.  Ask Perry, the Dew, and Straus.  They're the ones who control whether these issues are addressed within the next three weeks or will necessitate a special session."

• "A legislator that cannot look at moving a small portion of the RDF into bonds for water projects is the same guy that won't repair his roof shingles and waits for it to cave in."