As Congress continues its flirtation with comprehensive immigration reform, Texas politicians continue to send mixed signals about how far they’re willing to go in joining with the coalition of interested parties seeking to pass reform legislation. While Texas might seem an ideal partner in these efforts given its national prominence and large Hispanic population, influential Texas Republicans, including both of its U.S. senators, have been prominent and forceful skeptics.

The Texas delegation’s pull-me-close, push-me-away routine highlights an internal tension among Republicans regarding the GOP immigration reform debate. On one side are those with visions of a beautiful electoral future spent with a nice slice of the Hispanic vote — a dream informed by the countervailing nightmare of an Election Day abandonment on the part of Hispanics driven, in large part, by the party's restrictive views on immigration. On the other side are Republican leaders focused on the immediate benefits of their reliance on conservative primary voters who polls reveal are turned off by any measure even loosely characterized as amnesty.

Given Texas’ prominence as an anchor of the national Republican Party, should Republican members of Congress from other states be expected to follow the lead of the two Texas senators — particularly the highly visible Ted Cruz — in resisting the comprehensive immigration reform imperative that seems central to the long-term strategy of the Republican Party establishment?

The depiction of Cruz emerging in recent news coverage suggests that he might be an unlikely model for other Republicans to follow. He has cultivated an image as, dare one say it, a maverick of sorts, ruffling the feathers of his colleagues in both style and substance. His style might make him a singular case, an impression reinforced by the strong support of an unusually conservative Republican base in oh-so-red Texas.(We have written before that polling in Texas suggests that Ted Cruz’s skeptical tone on immigration reform reflects the attitudes of his supporters in the Republican Party, especially Tea Party identifiers.)

For other Republican politicians, Cruz’s ability to count on a reliable base of mobilized, conservative support is much more strategically important than his sharp elbows and tongue. An analysis of polling data in states with Republican senators suggests that if opposition to immigration reform is a politically sound position for Cruz based on Republican public opinion on the subject, it may be a good play for Republican senators in other states as well.

We looked at a set of questions on immigration policy in 31 states with at least one Republican senator as surveyed in the Cooperative Congressional Election Study (CCES), a highly regarded academic endeavor, and found that public opinion among Republicans in Texas is rather comparable to other states on a range of immigration questions, and in some cases more moderate. For example, 62 percent of Texas Republicans favor allowing police to question anyone they think may be in the country illegally, just below the mean of 64 percent. Arizona, the birthing place of the immigration law now associated with that state, was not surprisingly the most supportive. But the next five states with GOP electorates expressing the most support (North Dakota, North Carolina, Louisiana, Alaska and Indiana) all have Hispanic populations below 10 percent according to the 2010 Census, making GOP elite concerns about alienating potential Hispanic voters less pressing. 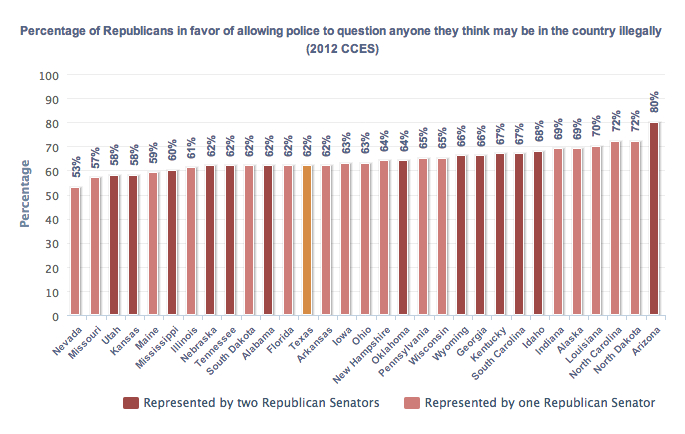 But the buzzword around immigration reform is “amnesty,” and while Republicans have made crystal clear their opposition to the very notion, Texans appear less opposed than most. Among the same group, Texas Republicans were in the bottom fifth of states when it comes to opposing legal status for those illegal immigrants who have lived in the country for at least three years while holding a job, paying taxes, and not committing any crimes. 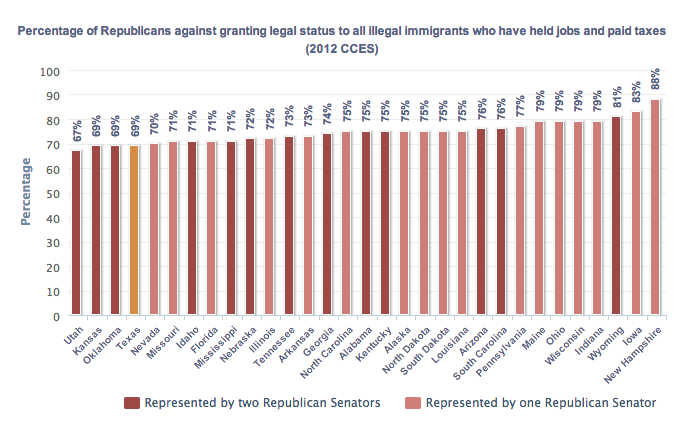 Even when it comes to issues that strike closer to home, like increasing border patrols, 79 percent of Texans support the increase, the sixth-highest percentage — but only slightly above the average of 76 percent.

Not every state is Texas, where Cruz can set up camp far to the right of center with little fear of a general election threat in the near and middle term. But of the 31 states with at least one GOP senator on our list, President Obama received 45 percent or more of the vote in only 10 of them — making a similar strategy an option worth considering.

So while GOP elites continue to argue that passing comprehensive immigration reform is in the GOP’s best interest and that the relevant stakeholders have signed off, the data suggest that the long-term interest of party strategists and the short-term self-interest of members of Congress are not necessarily in sync. Don’t be surprised if other GOP senators slide into the slipstream of Cruz’s path of resistance.

Note about the data: The CCES is a 50,000-plus person national stratified sample survey administered by YouGov/Polimetrix. The number of Republican respondents in each state varies from a low of 50 (North Dakota) to a high of 1,458 (Texas). Margins of error vary accordingly, thus the focus in this piece on the central tendencies, or means, and Texas’ comparison to those means.