As criminal justice issues flooded the news last week, we asked the insiders some questions about prosecutors and perps — who turn out, once in a while, to be the same people.

Almost three in four insiders said prosecutors convicted and imprisoned for breaking the law should be forced to resign. That relates to the headlines about Rosemary Lehmberg, the Travis County district attorney sent to jail for drunk driving.

The insiders split on a question inspired by state Rep. Ron Reynolds, D-Missouri City. He’s able to avoid court dates on a barratry charge while the Legislature is in session, and the insiders divided almost exactly evenly about whether that’s appropriate.

In Williamson County, former District Attorney Ken Anderson has been charged in connection with the wrongful conviction of Michael Morton, who served 25 years in prison for a murder he did not commit. Anderson’s lawyers argue the statute of limitations on the case expired long ago; 71 percent of the insiders say there should be no such limit in wrongful prosecution cases. And in a related matter, 79 percent say it would be a good idea to require prosecutors and defense attorneys to share important evidence in criminal cases.

Finally, we asked about suspending Miranda rights in cases like the bombings at the Boston Marathon. A majority of 54 percent said federal officials should be allowed to suspend those rights; 44 percent said the feds shouldn’t have that power.

We collected verbatim comments along the way and a full set is attached. Here are some of the highlights: 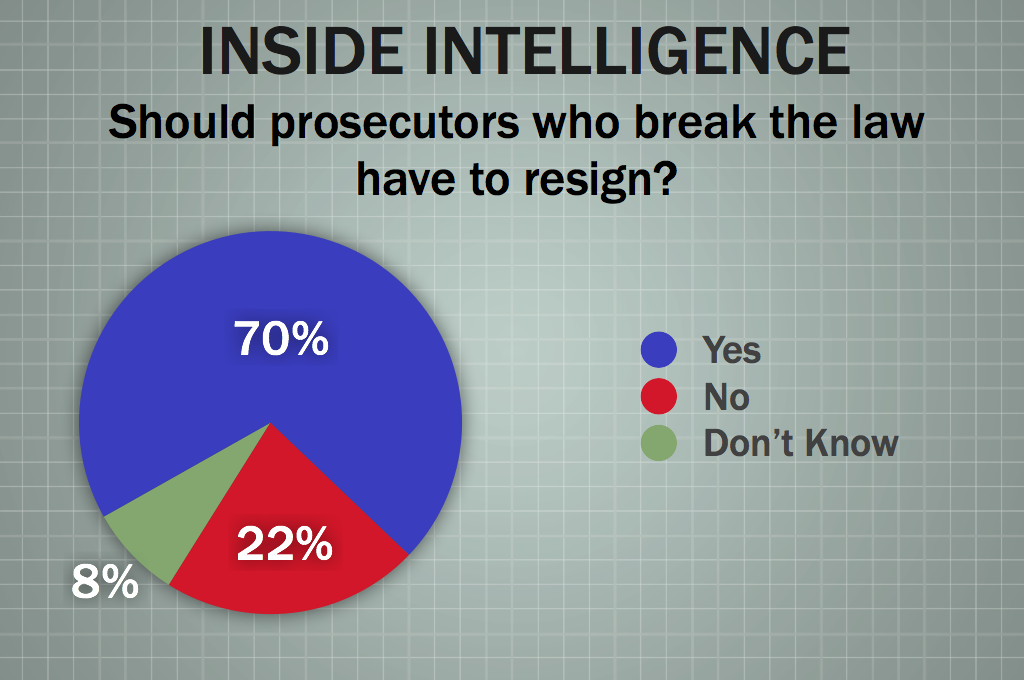 Should Texas prosecutors be required to resign if they are convicted and imprisoned for breaking the law?

• "No brainer. Break the law as a prosecutor, then you're no longer a prosecutor. Not always fair, but then again neither is our justice system."

• "'AND imprisoned'?! Is there really any daylight in cases like that?"

• "It depends on where you draw the line. A conviction of a felony or theft, resign. A conviction for a misdemeanor, no automatic resignation"

• "Depends on what law they broke."

• "Really depends on the details, doesn't it? Which law? First-time DWI; I don't think so."

• "Depends upon the circumstances. In most cases, they will probably lose their job anyway."

• "If she were a Republican, this would be a no-brainer. Only partisanship and wanting a check on state officials keeps me on her side."

• "We must hold prosecutors to the highest standards." 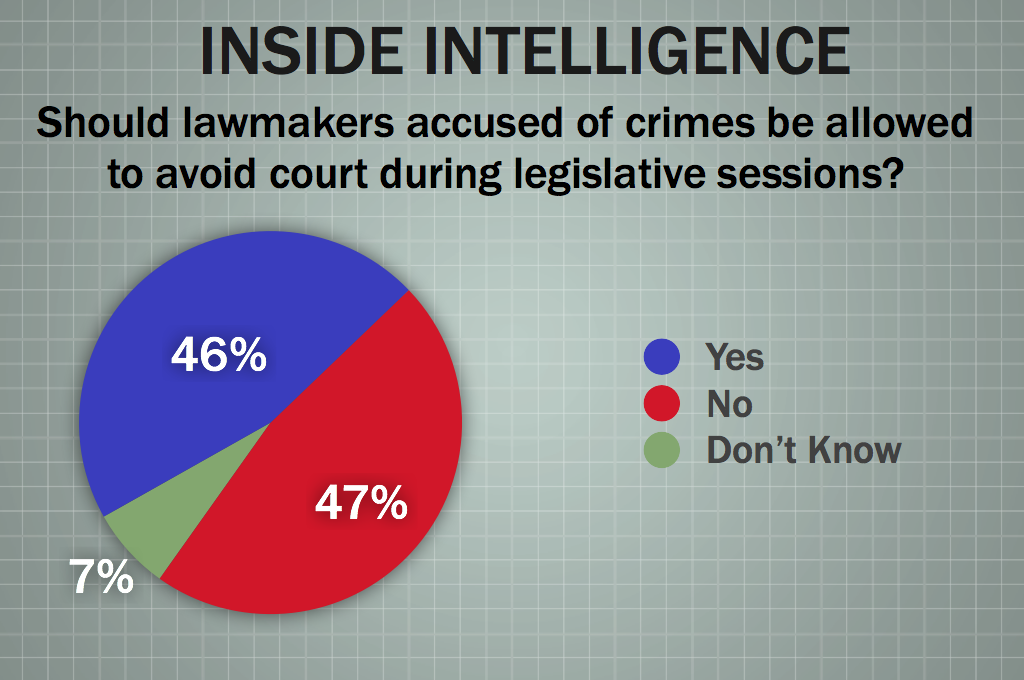 Should lawmakers accused of crimes be allowed to delay their court appearances during a legislative session?

• "The voters deserve their representation."

• "Does anyone else get a break from a judge because of a part-time job?"

• "Innocent until the State proves otherwise.”

• "In theory NO, in the reality of politics it is necessary. Now, letting attorney/legislators delay cases simply because the legislature is in session is pure sleaze."

• "You must look from the constituent's point of view. They deserve representation, even if their representative/senator is a criminal."

• "If we do not permit such a delay, we run the risk of politically motivated charges being levied to change the vote on a specific high profile issues."

• "This was put in place to make certain no politics are played to keep lawmakers from voting. We should keep it." 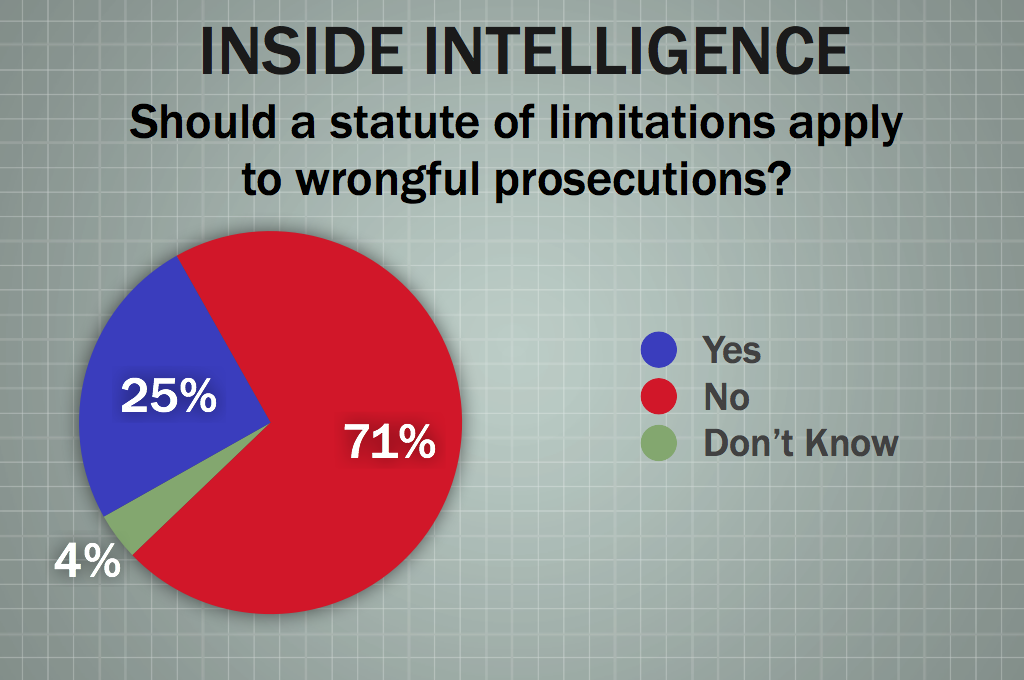 Should the state have a statute of limitations on wrongful prosecutions?

• "It seems to take so long for the justice system to determine whether there was a wrongful prosecution, that a statute setting a particular end date could not cover every injustice."

• "Yes. Statutes of limitations exist because of the reality that with the passage of time, memories fade, witnesses die, and exculpatory evidence is destroyed. This is equally true with case of this type."

• "Once the time is served, you cannot get it back. The person initiating the wrong should pay the same consequence."

• "Not for intentional misconduct by the state's representative to the court."

• "The statute of limitations should start when the poor guy got out of prison. It's contrary to the interests of justice that the effects of his crime insulate him from his crime." 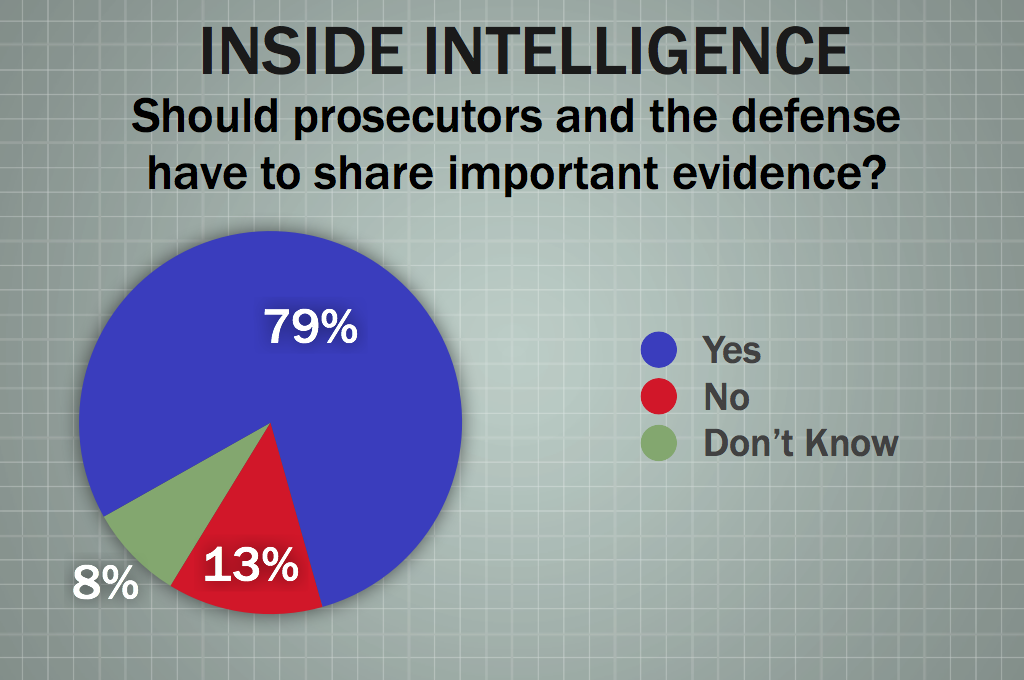 • "Criminal prosecutors ALREADY have to share evidence, especially exculpatory evidence. However, defense counsel should NEVER be required to hand over incriminating evidence!"

• "Clearly the prosecution should."

• "Do you really believe the guilty want to share their information with prosecutors?"

• "Absolutely. Both defendants and prosecutors need to have access to the same evidence." 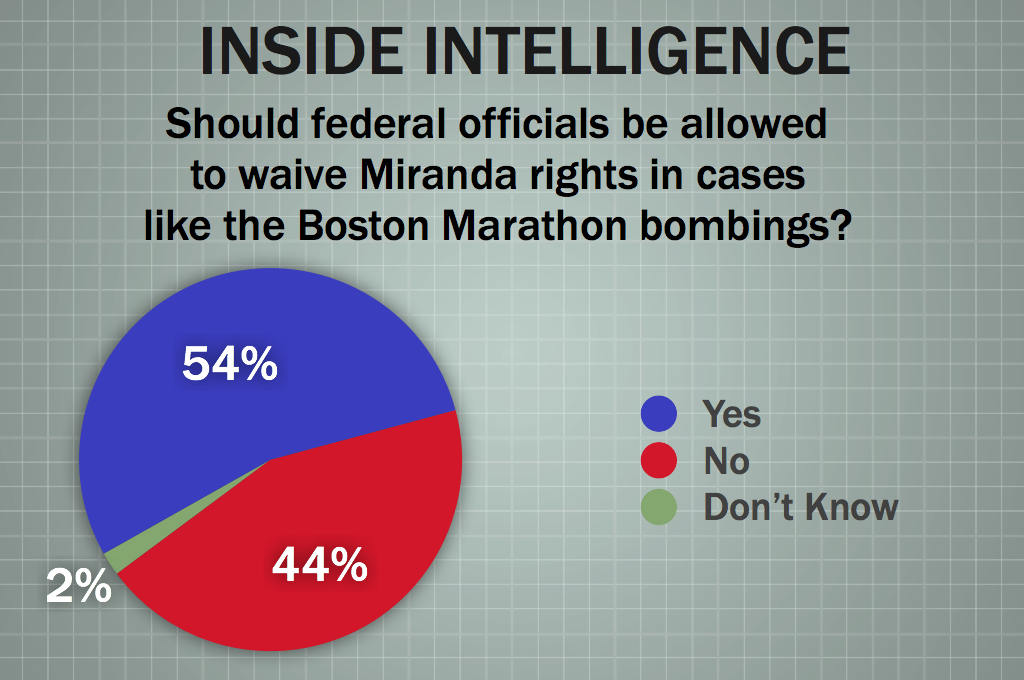 Should the federal government be able to suspend Miranda rights for defendants in cases like the Boston Marathon bombings?

• "Yes, if the interrogation is for national security purposes and not prosecutorial purposes, Miranda rights should not even be an issue!"

• "An American citizen acting within the U.S. should retain his/her full rights, regardless of the crime."

• "Yes, but it should be limited as much as possible, both to the number of incidences and the amount of time rights are suspended for any one incidence. This is a provision that could be inappropriately used and result over time in a loss of everyone's fundamental rights."

• "A constitutional 'right' isn't something the government should be suspending."

• "Supreme Court said this is fine. They can't use what he says before he's Mirandized in court. That's fair. Need to make sure he's not part of some sleeper cell."