The emergence of a broad center-right policy consensus in both chambers of the Texas Legislature, at least regarding the budget, has led to suggestions that the influence of the Tea Party movement in Texas politics is waning.

But public opinion regarding the Tea Party suggest a more complex situation. At the very least, reports of the Tea Party’s demise are premature as the label still claims a good expanse of the cognitive real estate of Texas voters — most importantly, among Republicans. But the Tea Party has also become a more predictable part of the political universe — and as predictability has increased, fear and intimidation have waned.

The Tea Party can no longer claim the sexy outsider status of an insurgency. It has repeated the journey of many outside agitators in the American two-party system, which since the 19th Century has specialized in incorporating and de-fanging dissident movements. The insurgents of 2009-10 are now well on their way to becoming another constituency nestled within the GOP. The self-styled revolution has not taken power; rather, it has settled for seats at the table.

So the reality is far more than a binary choice of whether the Tea Party is on the ascent or in decline. Its status and power is a matter of how it is positioned within the GOP, which in turn is a function of how the Tea Party label is viewed by GOP voters and GOP elected officials and opinion leaders

In an ongoing effort to gauge the public view of the Tea Party with the University of Texas/Texas Tribune poll, we’ve asked five times since October 2011 — as this process of incorporation in the GOP was becoming apparent — “Do you think the Tea Party movement has too much influence, too little influence, or the right amount of influence in the Republican Party?”

The data suggest that groups key to the Republican base are increasingly expressing the belief that the Tea Party has too little influence, rather than too much or even the right amount.

So what to make of the signs that Republicans in the Legislature appear less scared of Tea Partiers than they were just a short time ago? The general recognition of the Tea Party as a Republican constituency has made them a known quantity. Republicans who identify with the Tea Party have developed into a role akin to the role played by organized labor groups for Democrats: They organize and vote in primaries, and provide campaign volunteers for the elections. They exert more influence in some regions and policy areas than in others. However, they are not about to supplant the party in the allegiances of voters, or start a competing enterprise.

The strongest identifiers with the Tea Party label in the Texas GOP have become, literally, a known quantity. Beginning with our February 2010 poll, we've asked respondents whether, in a hypothetical Congressional race, they would vote for the Democrat, the Republican or the Tea Party candidate, given that the Tea Party had organized itself as a political party. According to our results, Tea Party identification has hovered between 16 and 24 percent for the life of the time series, indicating a sort of plateau for the depth of identification within the movement. Since February 2011, on average, 37 percent of Republican identifiers in Texas have chosen the Tea Party label in this item, compared to about 34 percent sticking with the Republican label. The remainder opted not to make a choice.

The stability of that sentiment has reduced concern among clearly conservative elected officials that constituents will abandon them for the Tea Party alternative — as long as they appropriately respect the group on key issues, just like any other constituency. One can see this new dynamic at play of late as the Legislature pushes forward on infrastructure improvements, a key issue for another important constituency — business — in the face of Tea Party opposition. 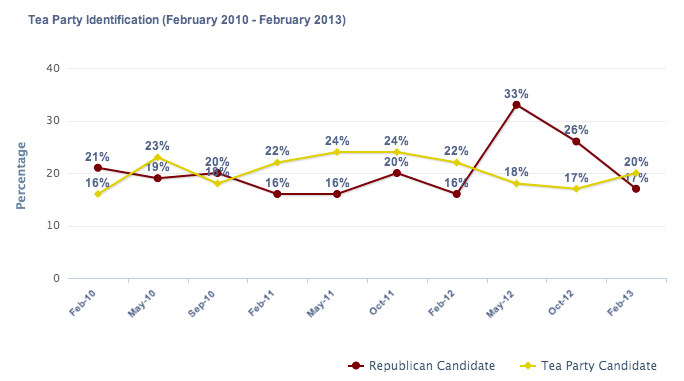 The Tea Party still plays an important role in the process. In the arena of statewide politics, a strong, mobilized coalition is likely to have an outsized influence in the Republican primaries that in the near term will continue to serve as the general election for most statewide offices. As a constituency, it is a ready-made group to mobilize behind one’s candidacy; in the wake of Ted Cruz’s defeat of David Dewhurst in 2012, the question to be asked in any statewide race is who the Tea Party identifiers will support. We are already witnessing the next iteration of this dynamic, as John Cornyn sidles up to the top Tea Party member in the Texas, and one of the group’s most outspoken national standard bearers: His junior colleague, Sen. Cruz.