U.S. Sen. Marco Rubio, R-Fla., set a record of sorts Sunday by participating in all four major network talk shows and appearing on CNN and both Spanish-language stations. The purpose was to further unveil the Senate immigration bill authored by the so-called Gang of Eight, and his message was simple: The bill will not provide amnesty. At least here in Texas, Rubio’s attempt to deflect potential criticism is well-founded, as anything smelling like amnesty is a poison pill for immigration reform among GOP voters.

On the other side of the aisle, Democrats appear to be walking an easier path. In the February 2013 University of Texas/Texas Tribune Poll, we asked respondents their attitudes on comprehensive immigration reform, including a pathway to citizenship as well as a separate question about a proposed guest-worker program. Democrats showed support for both, 75 percent in favor of a comprehensive immigration reform package including the pathway to citizenship and 72 percent supporting a guest-worker program. Opposition to either was small, 16 percent and 20 percent respectively, reflecting an all-of-the-above approach to immigration reform on the left.

Republican voters, on the other hand, present a more complicated attitude tightrope for their elected officials to traverse. While 56 percent of Republicans supported the idea of a guest-worker program, codified in the party platform here in Texas, only 30 percent supported the comprehensive overhaul with 64 percent expressing opposition, and mostly strong opposition at that. The "pathway to citizenship" portion of the proposal is no doubt the problem, and the reason that Rubio did his best on Sunday to deflect any notion that the law would result in an amnesty giveaway. 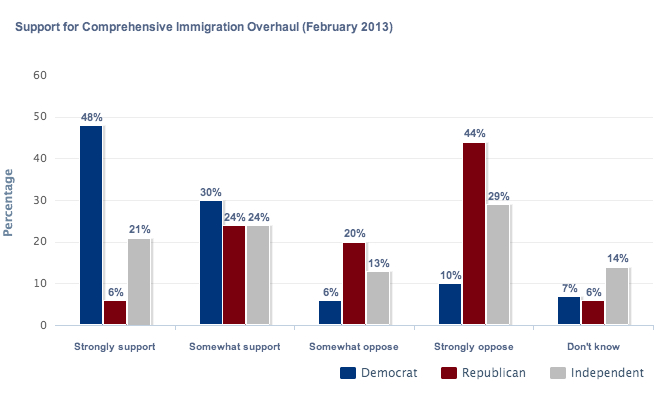 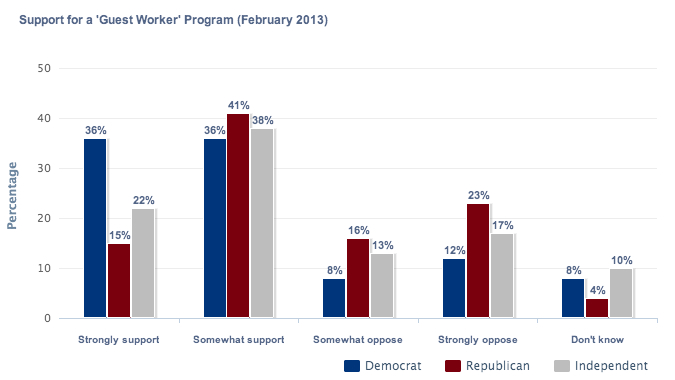 The saliency of immigration for each party’s voters adds another layer of complexity for the GOP. In the same poll, 49 percent of Republicans said that immigration or border security was the top issue facing the state, consistent with most of our previous polls. In contrast, only 7 percent of Democrats said that immigration or border security is the top issue. It’s no wonder that Republicans are on the offensive, putting one of their most popular faces forward on an issue that their voters care deeply about but that officeholders want off the table no later than 2016.