The insiders are more or less in line with the Texas House when it comes to testing and high school graduation requirements in the state.

Most — 71 percent — would cut the number of required end-of-course tests to 5 from 15. A similar number would drop the so-called “4x4” requirements for high school graduation, instead allowing kids to win diplomas without taking college-prep courses like Algebra II.

More than four of five of the politics and government insiders said high schools should offer different paths to graduation for students who want to go to college or directly into the workforce. And three-quarters of the insiders would require students in state-funded private schools to take the same tests required of their counterparts in public schools.

The full set of verbatim comments to the questions is attached. Here is a sampling: 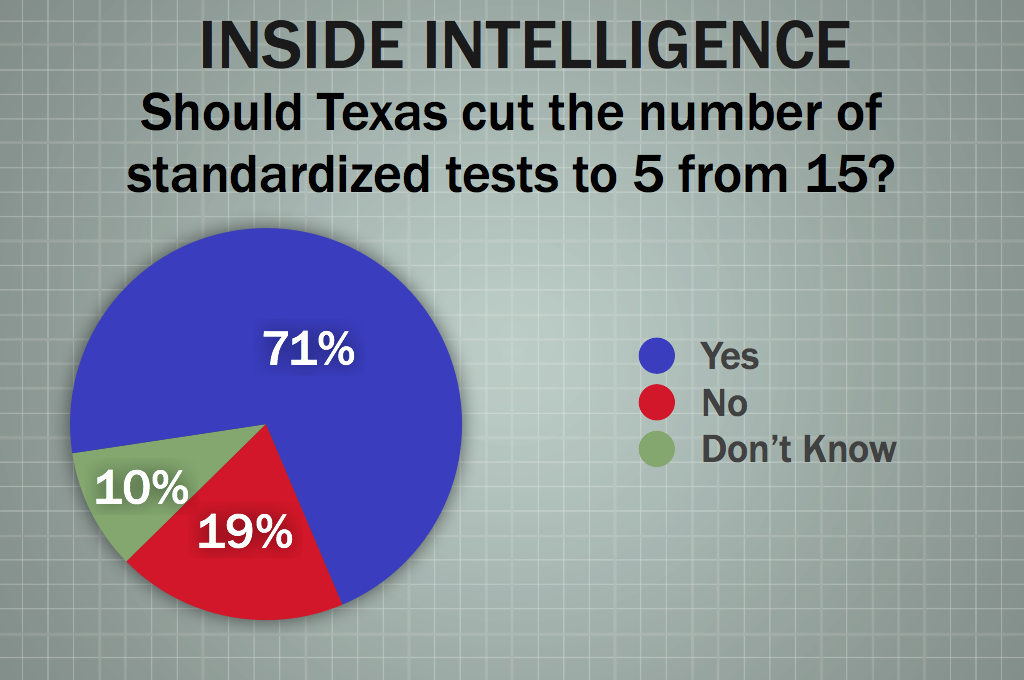 Should the Legislature lower the number of required standardized tests in high school from 15 to 5?

• "This seems to be too large of a reduction. The STAAR system has a lot of problems, but I fear this is too big a reaction in the other direction."

• "I struggle to understand why we need 5 standardized tests, much less 15."

• "The facts speak clearly; more testing does NOT equate to higher learning standards."

• "Number of test should be reduced, but so far it's all about the number. Shouldn't we be trying to figure out what needs to be tested and get the number that way? Right now, members of the Legislature seem to be guessing (like a lot of kids do on the test)."

• "Does it really matter how many tests we have if the students are not passing them?"

• "How many is not the issue. The problem is the state has forgotten why they gave the tests to start with. We must have accountability; it just shouldn't be the tail that wags the dog, and that is what it has become."

• "No. We have no other tool to determine whether or not kids are learning anything. However, we should take a close look at how the tests are administered -- how many 'proxy tests' the teachers are giving to get kids ready for the tests."

• "And they should up the standardized tests to lawmakers to 5. I'm far more concerned about their intellectual capacities than the 3rd graders at Mumford Elementary." 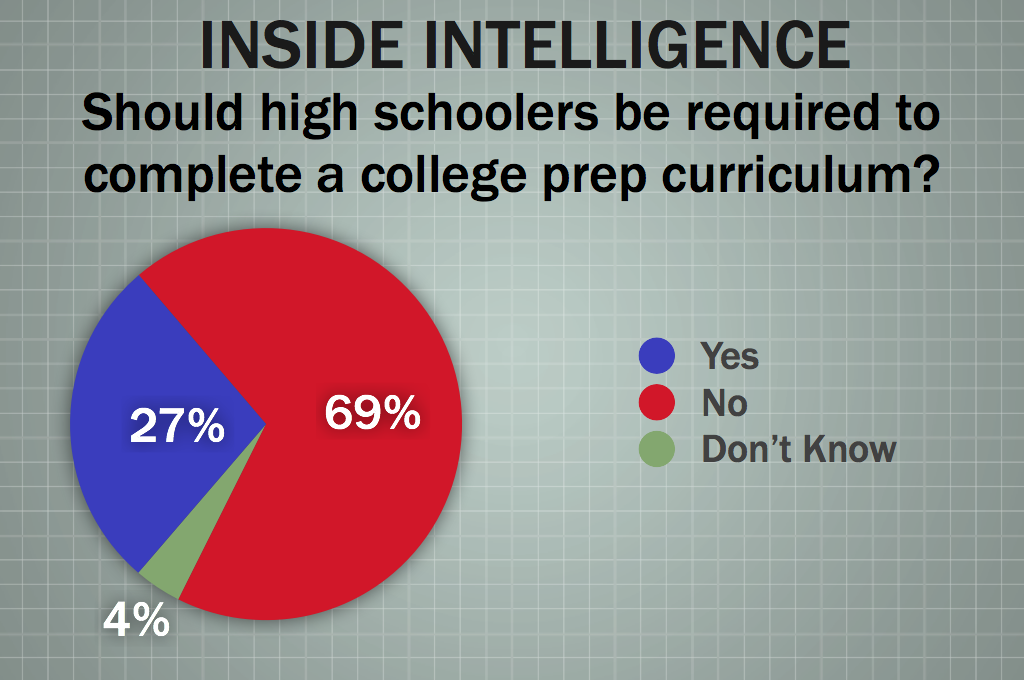 Should all students be required to finish a college preparatory curriculum (i.e. four years of science & math, including Algebra II or another math class) to get a high school diploma?

• "Large percentages of students will not go on to college, and trying to put all kids on this path partially explains the dropout problem. We need to offer different tracks for students with different abilities and goals."

• "Our focus needs to be on workforce readiness. Whether it means college, junior college, or technical training, we need to tailor it to the aptitude and interest of the student."

• "Not every student is college bound or even college material. When some high school graduates can't even put together an intelligible sentence, we don't need to fool ourselves into thinking they will all go to college."

• "STEM classes are a necessary aspect for a global economy. Efforts to dilute the school system should be viewed carefully."

• "I wonder if we would be having this 'not every kid needs to go to college' discussion if the student demographics in Texas were still majority White and not majority Hispanic. This Legislature is prepared to be the first in decades to tell our kids 'Let's go out there and shoot for the middle!'"

• "Students should have access to the curriculum, but they should not be required to take and finish it. Not everyone wants to go to college, and not everyone should go to college. To quote the late, great Judge Smails, 'The world needs ditch diggers too.'"

• "Many students are not and should not be college-bound"

• "Your mis-state the question. The 4x4 has been shown to be preparatory not only for 4 year colleges, but also for two year and technical colleges as well as most high paying, new jobs."

• "Yes we need that since math and science teach people to think critically. Critical thinking is a foreign concept to most people. And we must insist that US and World history be included in this"

• "There are hundreds of thousands of American manufacturing jobs available that cannot be filled without skilled labor. Not every kid should choose a four-year philosophy degree over a great career as a welder or C&C operator. We need to begin rewarding and valuing those that can build the future as much as we reward and value those that dream it."

• "Throughout America's history, students have been given an opportunity to 'change their minds' because they've had the proper education to do so. The dumbed-down curriculum isn't useful if the student changes his mind later."

• "This is a trick question. In high school I made all a's and b's except for d's in algebra and typing. It's a good thing I became a lawyer." 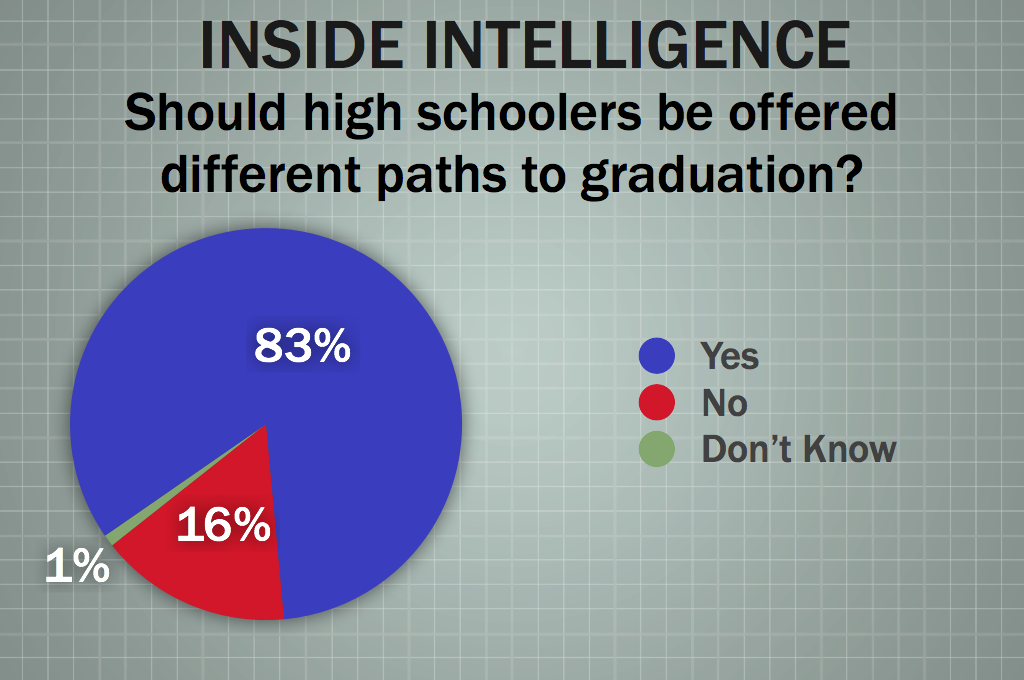 Should high schools offer separate pathways to graduation for college preparatory students and for career-track students?

• "Bring back vo-tech!!! On hot days, I lament the lost opportunity to take A/C repair."

• "Career ready high school students will have a positive economic impact to local and state government. Most importantly, these students will start careers instead of being a burden on society."

• "Ten years down the road, I think we all know which kids will be on the college track and which ones will be steered to career (because college isn't for them). If anyone can say with a straight face that it won't happen, I've got tickets for a tour of the Alamo basement I'd like to sell you."

• "Yes, but it doesn't have to be completely separate tracks. You must leave room for students to change direction without losing years. Bottom line, there must be electives. A future engineer might do well to take a welding class, even if it isn't on the college prep track."

• "Teachers want to do this, because it would be easier for them, but it is a terrible idea that will result in broader divide in our society -- as Commissioner Williams has said, we already know who will be put in the 'career track.' We want our work force to be well educated in every sector. That should be the goal."

• "Yes, but a careful yes. The decision has to be the student's/student's family's decision. Otherwise, you're back to the blackbirds/bluebirds tracks of 40 years ago."

• "Absolutely.... tried to run that flag up the pole on the Perot Commission years ago, but the screaming wouldn't stop. All of the 'older' civilizations of the world figured out a long time ago that all brains are not equal. Trades are paying more than folks with college diplomas. We have continued what Carl Parker referred to as 'dumbing down.'" 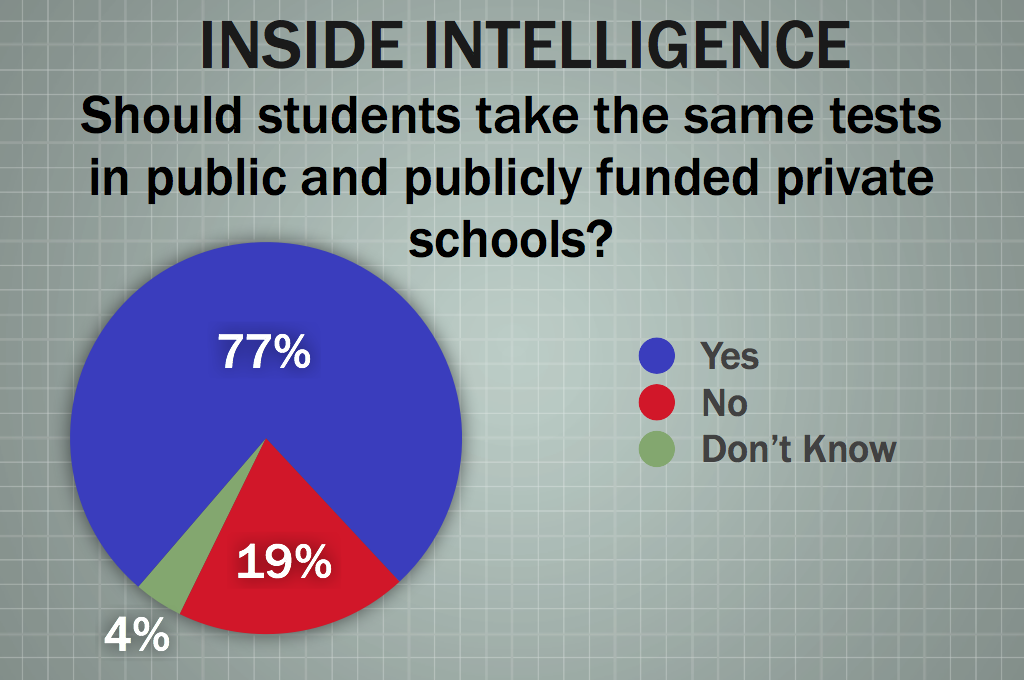 Should students in state-funded private schools be required to take the same tests as those in public schools?

• "Isn't the whole point of non-public school options to provide alternatives and opportunities for innovation?"

• "Why are we debating this question? Any school receiving tax-payer dollars should be held to the Sam standards."

• "You take the state money, you should get the state 'strings.'"

• "I thought the point of the charter schools was to allow greater flexibility and get rid of bureaucratic mandates like inane tests. Seems like the kids graduating from these schools are prepared for college, whereas not all their counterparts in public schools are ready. Proof is in the pudding."

• "Tests serve the same purpose regardless of whether a school is public, public charter, or private. Public money for private schools will turn out to be a huge mistake for children, parents and other taxpayers. Only private investors will come out on top. If the state's leadership didn't already know this, there would be no reason to exempt private schools from the accountability system."

• "Maybe not the same test but definitely the same standard. If a student is in a private school that focuses on math and science, their testing should be weighted as such, with less emphasis on writing or literature."

• "Public money and public accountability tests have no place in private schools."

• "Absolutely. I'm not interested in allowing my tax dollars to be used without knowing whether I'm getting the bang for my buck."