The political and governmental insiders seem situated firmly on the University of Texas at Austin side of the feud between the governor and the UT System regents and the administration at UT-Austin.

Start with Bill Powers, president of the Austin flagship: 74 percent said he shouldn’t resign or be replaced. And the regents: 75 percent described them as “interfering” at UT-Austin, while 18 percent describe them as “doing their jobs.”

We collected comments along the way and include the full set here as an attachment. Some highlights follow. 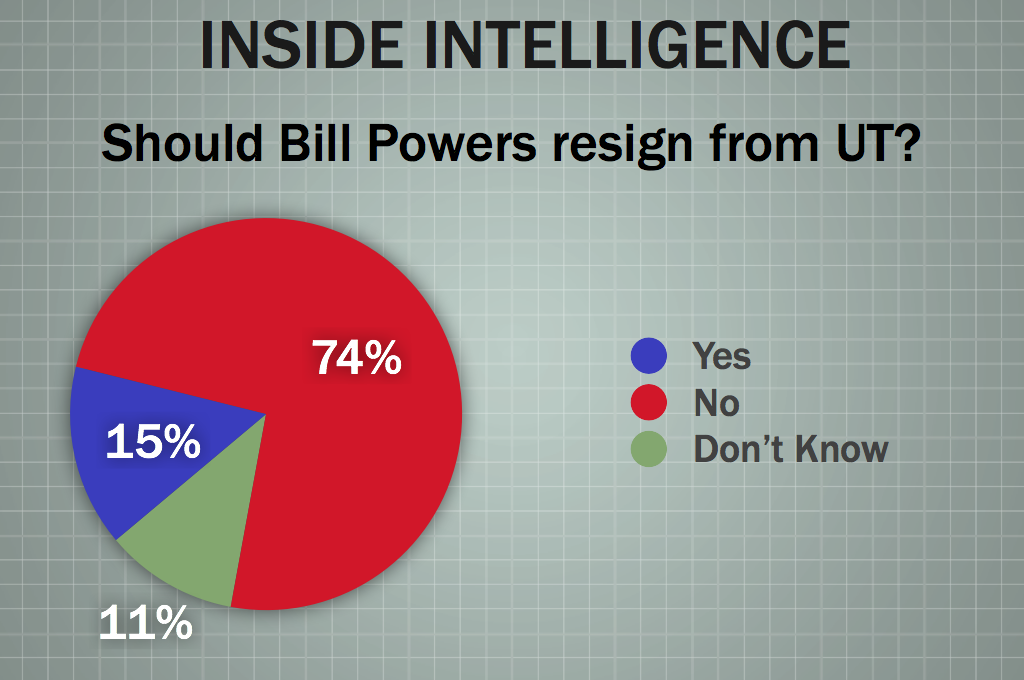 Should Bill Powers resign or be replaced as president of the University of Texas?

• "President Powers may not ultimately be able to save his job from the wrath of the governor but there is no way he should resign or be replaced. Of course, all of this has to be taking its toll on him but I hope he doesn't give in. He's an honorable guy standing up to a less than honorable effort to throw him out."

• "He's been an excellent president. His only offense is being an independent voice for the university in a city that is under autocratic one-man rule."

• "While I think Powers is not without blame on several fronts, the regents, acting on behalf of the Governor, have contorted the governance of the system."

• "Powers’ only fault is telling the truth about the affirmative harm a decade of Republican 'reform' has done to higher education in Texas."

• "If he is forced out, this will be one of the most ignominious moments in the history of Texas. Academic freedom and political independence will be well on their way to their graves; something like this happening fifty years ago may not have been a big deal, but now, it seriously questions the legitimacy of institutions supposedly reformed years ago and held to contemporary standards of ethics."

• "He's a good fellow, but he's perpetuating a fight that he should have deftly avoided (as Cigarroa has) and used his energy and strength to reform and elevate UT. Rather we get all the high profile martyrdom and division. He's not the main fault, but he hasn't used his leadership well. He's become part of the distraction. Folks can blame Perry and his crowd, but these are the same folks who picked John Sharp, a fellow who is moving forward rather nicely at A&M."

• "Yes, but only because he's a jock-sniffer who has refused to clean out a top-heavy, sclerotic athletic department. (Hey, this is Texas. What did you expect, a reasoned debate on academics?)" 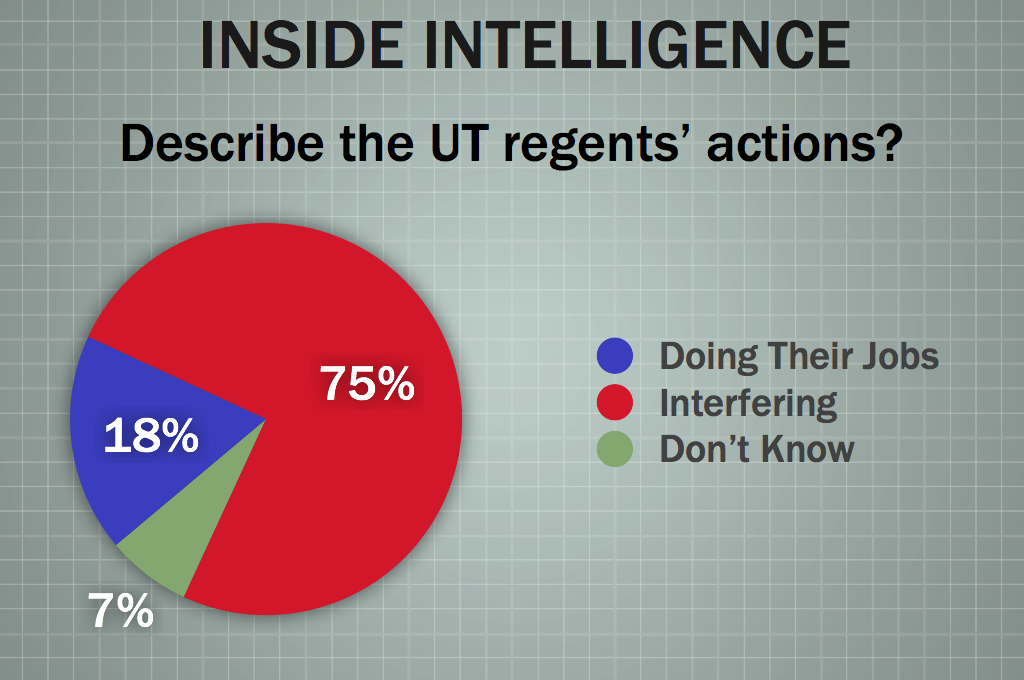 Are the UT System regents interfering at UT-Austin, or doing their jobs?

• "Not everyone might agree, but the regents are well within their authority in reviewing and/or questioning the actions of any president in the UT System."

• "Micromanagers who are damaging the reputation and image of the UT system and especially UT Austin."

• "Oversight by another name."

• "They're acting ridiculously and it is extremely obvious what they are trying to do. Not once in the twenty plus years I've been working the legislature have I EVER seen the UT board of regents act so malicious and with ill content. Makes me ashamed to be a former student."

• "As long as they are setting policy, the Regents are doing their job."

• "Interfering, but unfortunately they are also doing their jobs, as is defined by he who appointed them."

• "A Regent should always have the ability to ask appropriate questions. What they do with the information is the only thing that should be open to public scrutiny."

• "The very thought of university regents actions being characterized as interfering is silly. That's their job." 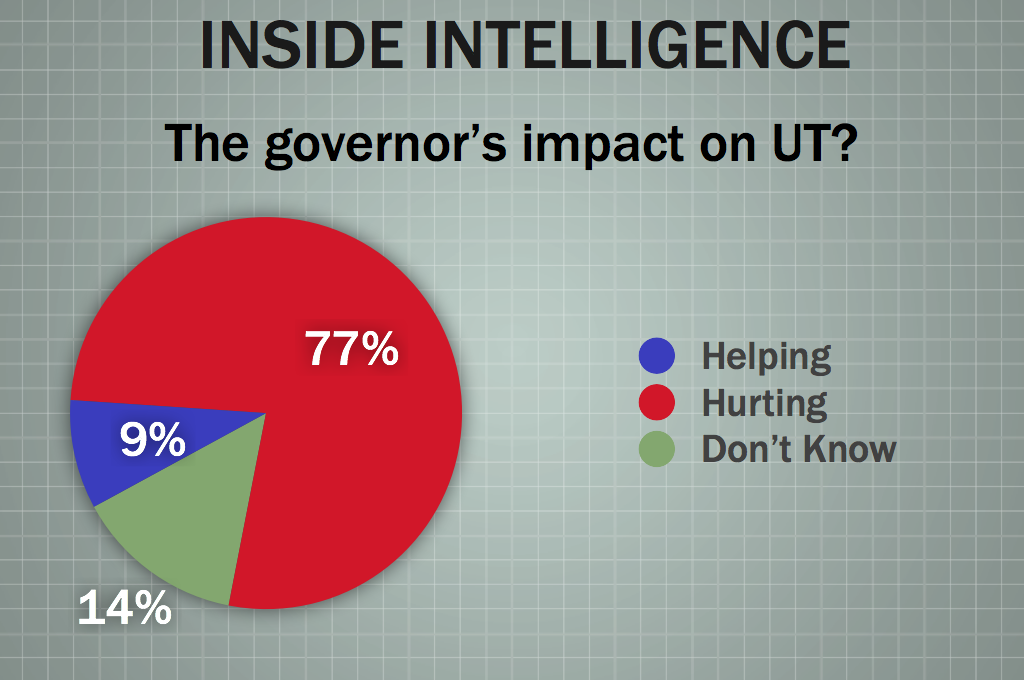 Is Gov. Rick Perry helping or hurting the UT System?

• "The System will be better when Powers and others recognize they are there to serve the students and not the faculty or their own egos."

• "Perry's major point -- that the University could use some economy measures -- is overwhelmed by the naked political interference in Texas' flagship university."

• "The way it's playing out, all the drama is hurting UT."

• "Perry is an old-school Aggie who hates The University with every fiber of his being. No rational basis for his actions whatsoever."

• "I think Governor Perry has the right vision for the future of Texas education, but, as with some of his past initiatives, personal vendettas detract from otherwise noble efforts. We need a few flagship, world-class universities, with the others providing affordable educations which will impart job skills as well as abstract thoughts and obtuse facts. In other words, one size doesn't fit all."

• "Helping, his aim is to better serve the students and parents. Remember them, the consumers of this public good."

• "If he interferes; he's hurting. If he does nothing, he's hurting. He's probably stuck between a rock and hard place over the people he appointed to that post."

• "Definitely hurting. Forget the Bill Powers stuff. Can we talk about him putting an Aggie on the UT Board of Regents, please?" 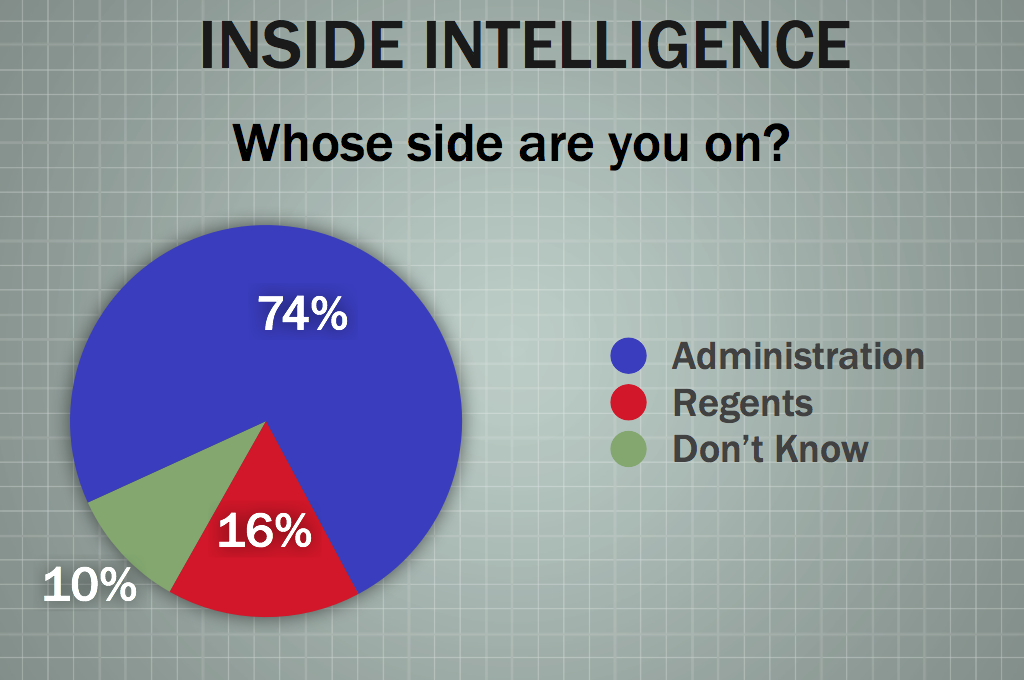 If you chose sides, would you be with the administration at UT-Austin or with the UT System regents?

• "UT-Austin all the way. And God bless Steve Hicks. I hope he can say he's a Regent with pride again soon."

• "College administrators always get defensive when their actions or motives are questioned. Regents provide oversight. Everyone answers to someone. Believe it or not, that should apply to academia as well."

• "Academia is already an echo-chamber, UT even more so; some would argue this is systemic to the higher education industrial complex. The regents bring a vital outside perspective to the governance of the school."

• "While the tendency is to think that elected officials are getting in the way of professional educators, in fact, education bureaucrats have created a university that does not reflect the values or intentions of the people of Texas who are, of course, paying for it. Powers and his ilk have no divine right to be free of politics when they live off government money. Most Texans are not worried that our university system does not function like California's, which is often the criticism. Instead, the California model is what we would like to avoid."

• "Call me old-fashioned, but I trust academics on issues of higher education as opposed to political appointees."

• "Tough one. Administration on some things and Regents on others."

• "How about giving us the choice of neither!"

• "Wrong choices. The correct answer is 'the Students.'" 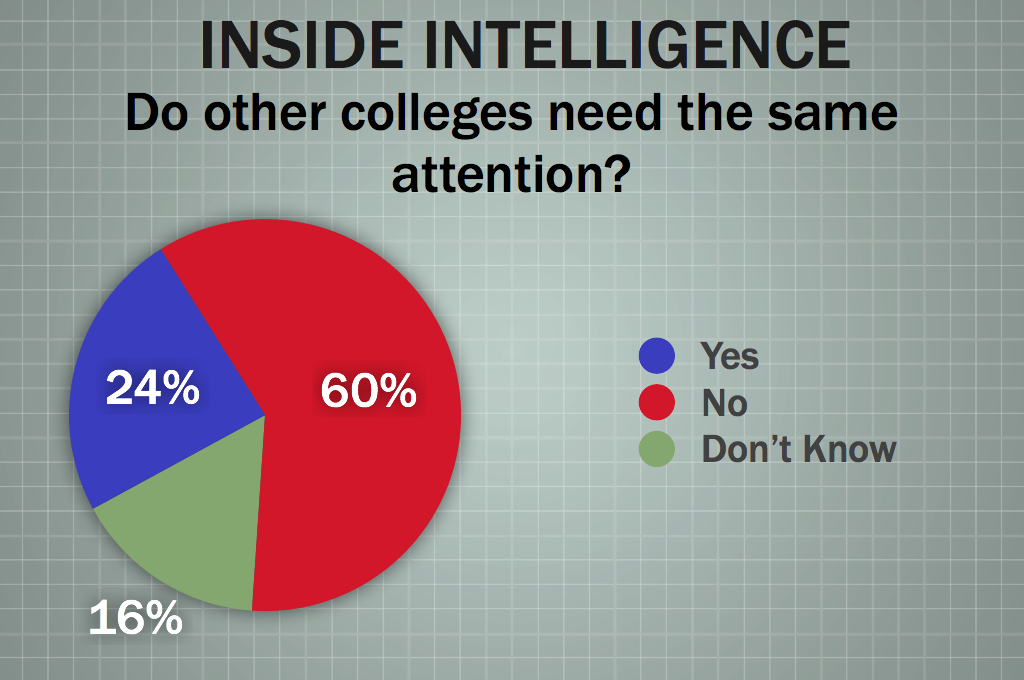 Would other public institutions of higher education in Texas benefit from the same attention the UT system is getting from state leaders?

• "Leaders at other state institutions are keeping their heads down, trying to avoid attention, and thanking God it's Bill Powers' fight (and not theirs)."

• "There is more transparency when state leaders are involved. The press is skeptical if the Governor is involved, but they rarely question the academics."

• "The more state leaders forget there are other things to meddle with, the better."

• "What about Texas Southern University or Prairie View? Would it be possible to give some attention and money to these two schools? Is it right that vending machines at TSU are placed behind locked gates?? That dorm rooms here sometimes have problems with rodents, mold etc.? Yet the Regents at TSU don't really ask their President for updates on these issues? When was the last time the Governor visited Prairie View? Considering its proximity to College Station you might think he could spare some time to visit there! His Chancellor has certainly visited (thank the lord for John Sharp!)"

• "Nobody wants to be in the spotlight like this." 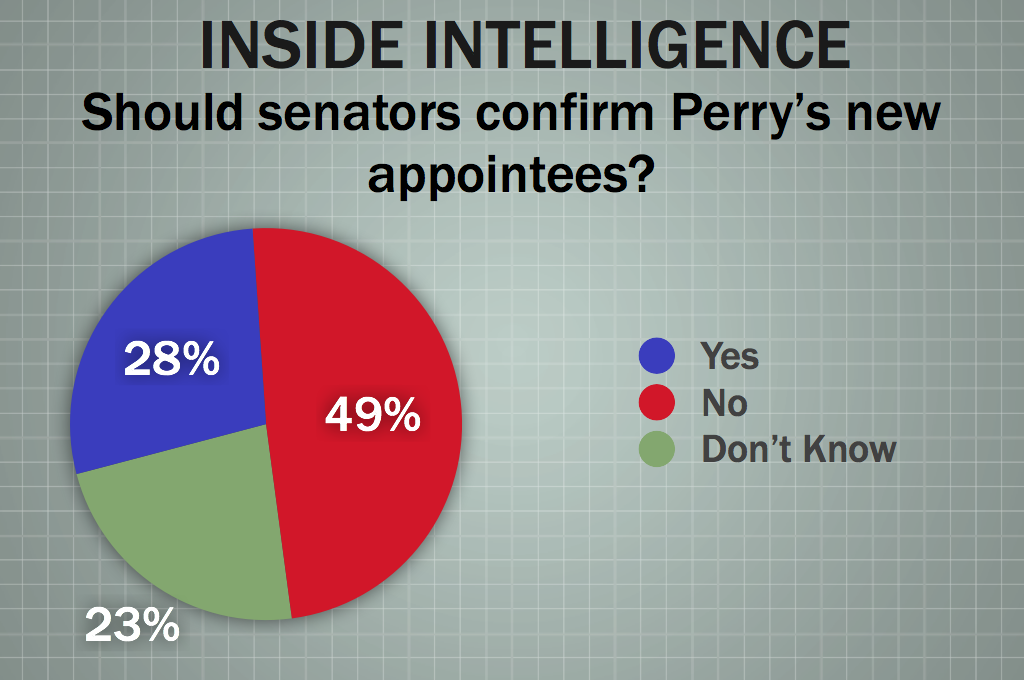 Should Texas senators confirm the governor’s three newest appointees to the UT Board of Regents?

• "Voting not to confirm would be symbolic -- Perry would find a way to get his stooges onto the board anyway -- but would be an important statement of protest against Perry's interference."

• "If they don't confirm them, won't the Governor just make recess appointments? Best solution is to past a 'best practices' governance bill re and then confirm them."

• "Doesn't really matter. He can wait the Senate out."

• "Are they qualified candidates who care about higher education in Texas and the direction of the UT System? If so, then yes. Anything less, then no."

• "Why punish the innocent?"

• "Certainly not the Texas A&M alumni."

• "Knife cuts both ways. Meddling is not good for executive or legislative."