It would be nice if specific policy preferences, beliefs about the proper scope and role of government, and general ideological predispositions were the primary forces shaping people’s political attitudes, but politics is complicated.

Many — if not most — citizens don’t hold a strong, coherent set of ideological beliefs, philosophical outlooks on government or specific information about the ramifications of particular policies. Life is short, and citizens should be forgiven if they do not read the latest policy analysis by the Congressional Budget Office or peruse the canon of political philosophy in their spare time.

One of the ways in which voters overcome this understandable state of affairs and provide us pollsters with reliable statements about their opinions is through something called the “likability heuristic.” If voters associate a particular policy (say affirmative action, Medicaid expansion or voter ID laws) with a particular individual or group (say liberals, Rick Perry or Republican legislators), oftentimes — whether they know anything about the policy or not — they will simply transfer their attitude about that person or group to the policy in question. If you don’t know much about affirmative action but don’t like liberals, you’re probably hoping that the court makes a sweeping ruling against affirmative action policies in Fisher v. University of Texas. If you don’t know much about some of these new voter identification laws but dislike Republicans in the legislatures who passed them, you probably oppose voter ID requirements.

Given this backdrop, a lot of the politics in Texas over the past four years can be explained with one simple graphic from the archives of the University of Texas/Texas Tribune Poll: 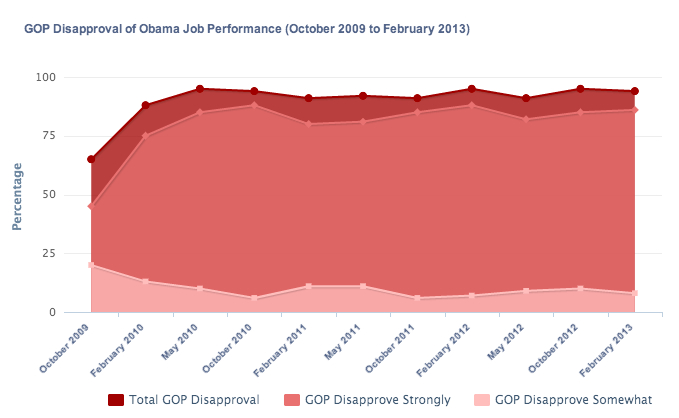 It’s easy to see why anything associated with President Obama has an especially tough time gaining traction in Texas. While there are certainly plenty of Texans who hold strong, belief-driven opposition to the policies espoused by the president, many in the GOP rely on one simple fact: their overwhelming disapproval of Barack Obama.

Joshua Blank is manager of polling and research at the Texas Politics Project at the University of Texas at Austin.