The insiders, on the whole, are unswayed by arguments for term limits at the top of the state’s political food chain. The idea has some currency at the capitol, where the state Senate has blessed a two-term limit on statewide officeholders. Most of the political and governmental insiders in our survey — 55 percent — are against it.

They feel even more strongly opposed to 12-year-limits for state and federal lawmakers, with more than two thirds giving those ideas a thumbs down.

Finally, we asked whether lawmakers ought to be eligible for lifetime pensions and health benefits after 10 or 12 years of service, as they are now. That split the insiders: 43 percent said officeholders should get those benefits, while 48 percent said they should not.

We collected comments along the way and a full set of those remarks is attached. A sampling follows below. 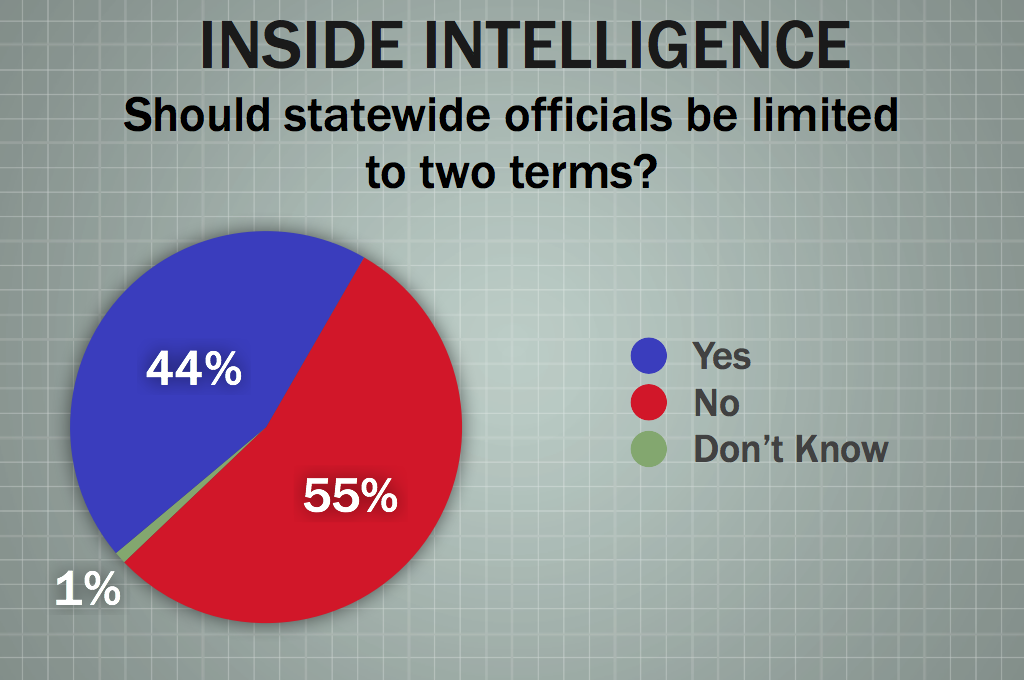 Should statewide officials be limited to two terms in office?

• "Unless one could enact enforceable campaign finance limitations--in other words, to borrow from the late Edmund Kuempel, 'if a frog had a back pocket he'd carry a pistol and shoot snakes.'"

• "We have term limits: they're called elections. And if someone like Judith Zaffirini or Kay Bailey Hutchison breaks a promise to the people to serve only X terms, then it's up to the voters to either punish or reward her."

• "Too much stagnation is unhealthy"

• "This is obviously a Governor Perry question. Neither frustrated legislators nor bored pundits will decide when his time is up; Texas voters will."

• "HELL NO! And give staff, the agencies and lobbyists even more power and authority. By the way, it is ironic that Republicans are pushing for this. We have as our basic tenants individualism and less government. This would result in less freedom and more government. Plus, are we as voters supposed to be the ones who decide who gets elected. This sounds nice and all but if thought through and logic is applied it is a horrible idea."

• "If voters are CRAZY enough to keep electing the people putting their state at further risk, then so be it. Republicans have been in charge of this state for 20 years now - those who have voted them in have NO ONE but themselves to blame for the horrible conditions of our educational system, the continuing health care crisis and the laughingstock which Texas has become. Sadly, 'Thank God for Missouri/Alabama/Mississippi' has turned into those states saying 'Thank God for Texas'." 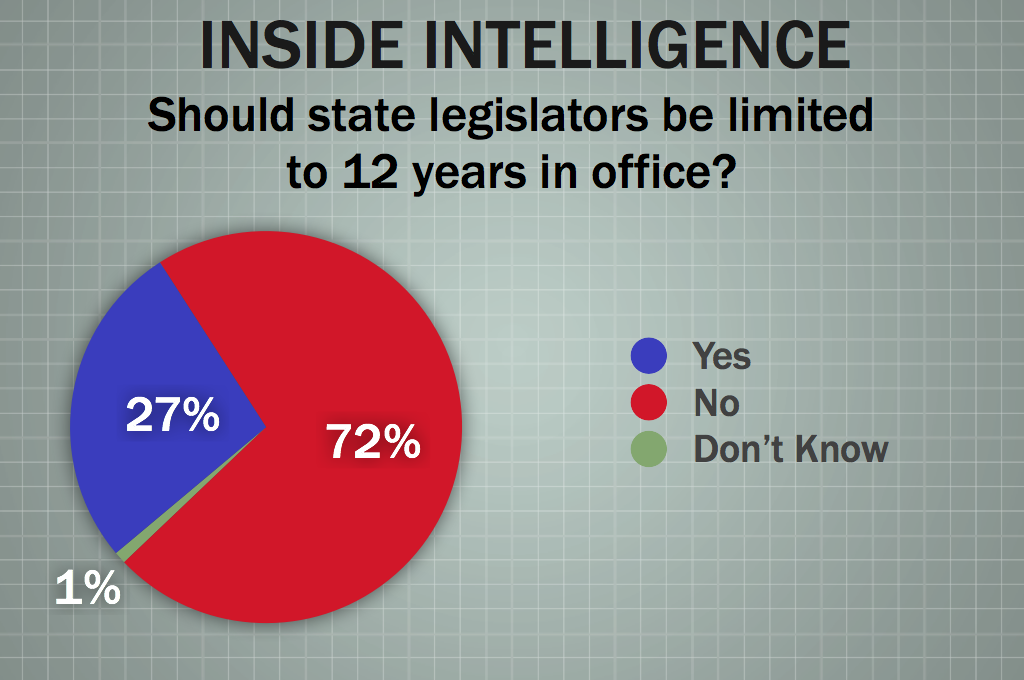 Should state legislators be limited to 12 years in office?

• "Term limits tend to elevate staff to the actual seats of power since they are the only ones with any continuity of issues. Voting someone out of office is the best limits on terms, not some arbitrary number of years of service."

• "Some legislators are just starting to figure it out in their 12th year in office."

• "One term is way too much for some; and 6 terms way too little for others. By arbitrarily limiting service, term limits takes power from the people and transfers it to staff and administrative agencies."

• "Experience is a good thing."

• "No. There is a qualitative difference between executive branch and legislative branch officials. The former should be term limited, but not the latter."

• "Would you want your attorney, doctor or accountant to have only 12 years of experience?" 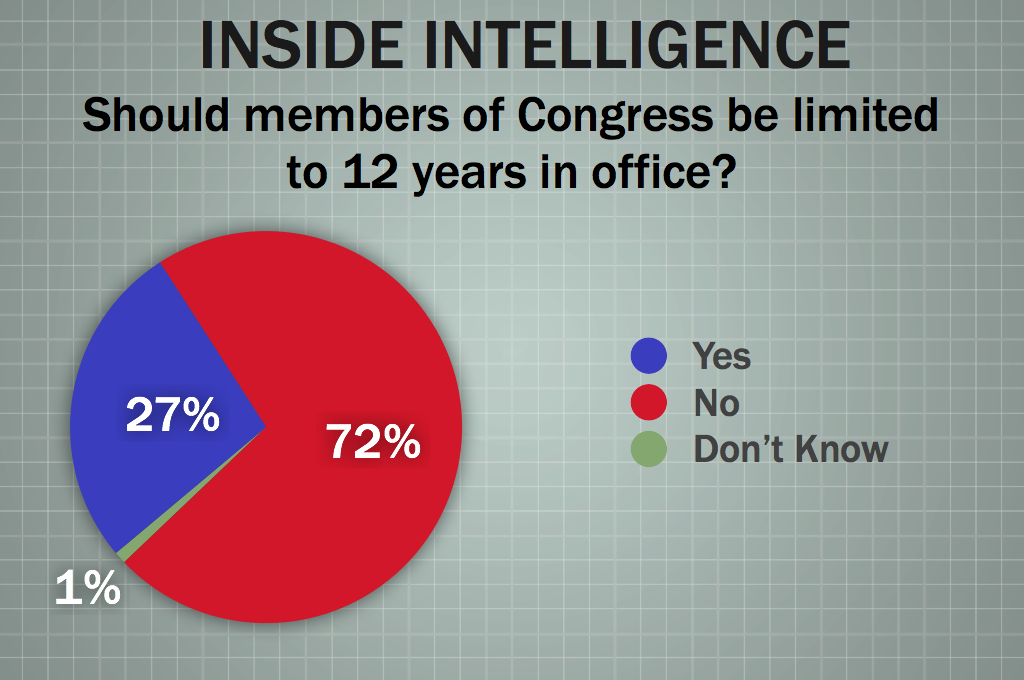 Should members of Congress — House and Senate — be limited to 12 years in office?

• "Are you suggesting we handicap Texas by sending to Washington, D.C. newbies every dozen years while other states rack up seniority and expertise at the expense of Texas? Or are you suggesting we empower federal bureaucrats by essentially making the Congress weak?"

• "Different ballgame entirely. We need them to be able to build seniority to move up through the ranks."

• "No, but Congressional Terms should be made four years rather than two!"

• "Both Ds and Rs have a distinguished list of congress members and senators who have served beyond 12 years. Why is that a bad thing?"

• "It is hard enough to remember their names now. The reality is that members of congress do not do much. Term limits will not make a difference."

• "Senators should once again be elected by the legislatures. This is the best way to have states issues considered. Senators answering to the legislature would take care of the need for term limits." 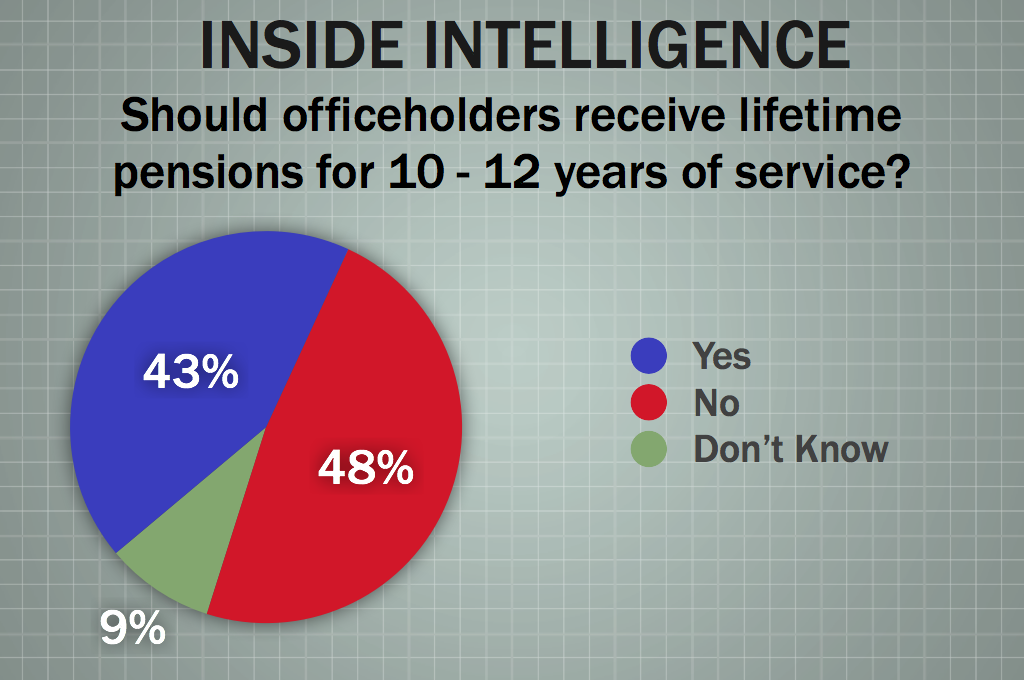 Should officeholders at any level receive lifetime pensions and health benefits for 10 or 12 years of public service, as they do now?

• "Legislators' pensions should be based on their salaries not the salary of a district judge."

• "I don't even think our military personnel receive lifetime pensions and health insurance after 10-12 years of service. If they do, I doubt that their pensions are tied to a judge's salary! Repeal the lucrative pension and health benefits, and legislators might impose term limits on themselves."

• "As long as they remain citizen Legislators, they deserve it."

• "No problem with this because we pay them a pittance to serve."

• "Most officeholders don't draw salaries in line with the market; back end benefits are an appropriate way to compensate them for their service."

• "Federal pensions are now relatively modest, but do include valuable health benefits."

• "Do away with all pensions for all elected officials. It's called public service for a reason and it comes with certain sacrifices. It was never intended to be a lifetime entitlement."

• "Of course. Isn't that the only reason to run for office?"

• "They should not have their pensions linked to a full-time professional salary -- the judges -- as they do now. They are citizen legislators and should earn their pensions elsewhere. But they should get a small pension for their service."

• "Their pensions should be commensurate to those for school teachers."

• "Yes, if you're going to insist on paying them peanuts while in office."