This article is part of an occasional series on water and hydraulic fracturing by The Texas Tribune and StateImpact Texas. View an interactive map of Texas fracking disposal wells.

In an Austin warehouse, a four-year-old company called Omni Water Solutions is working on a way to recycle water used in hydraulic fracturing. Its technology involves a large container, dubbed a “Hippo,” that purifies water from oilfields via filters and other means. The scrubbed water could potentially be reused in the fracking process, which requires roughly 4 million to 6 million gallons of water per well.

Warren Sumner, Omni’s chief executive, said that during field trials in 2011, he had even showered in the company’s recycled water, when his trailer ran low on fresh water.

The recycled water was free of chlorine and hardness, and “you’d be amazed how good you feel – especially after washing your hair,” Sumner said.

Technologies like Omni’s are developing rapidly amid rising interest in recycling Texas’ oilfield water. The large amount of water required for fracking has drawn scrutiny, especially as drilling proliferates in arid parts of West and South Texas. Natural gas companies recycle water as a matter of course in another of the nation’s major drilling regions, the Marcellus Shale of Pennsylvania. But recycling is only getting started in Texas because using freshwater is relatively cheap.

“Recycling for us — it varies from area to area, again — is 50 to 75 percent more expensive than the alternatives,” Jay Ewing, a Barnett Shale-based representative of drilling company Devon Energy, told a joint hearing last month of the House Natural Resources and the House Energy Resources committees. 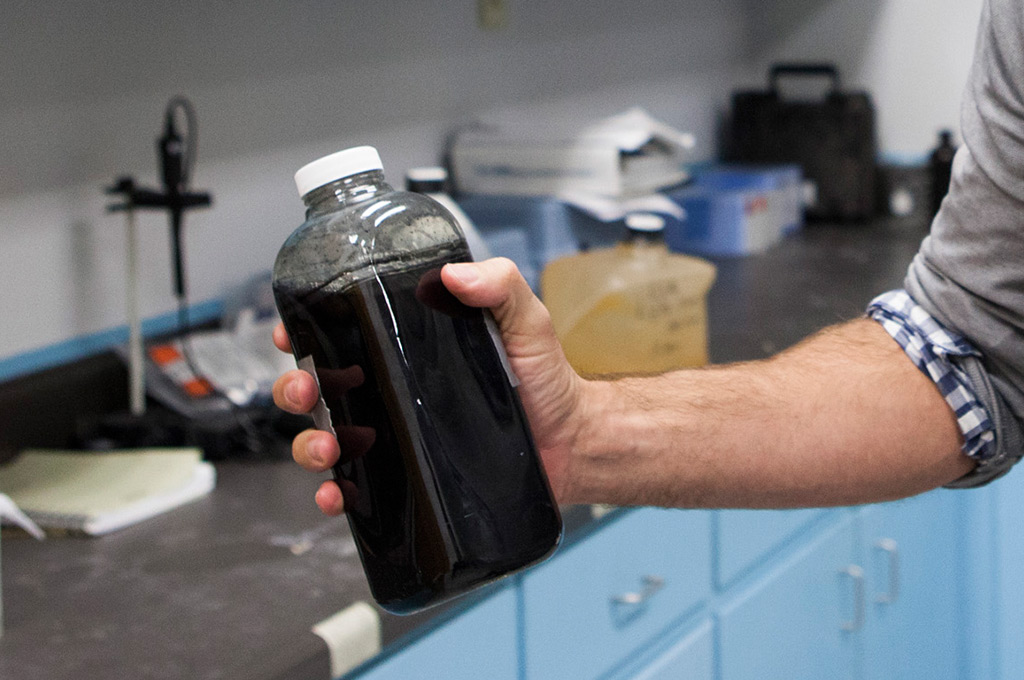 ">Enlarge photo by: Spencer Selvidge
A bottle of "produced water," which has come up from the oilfields and smells pungent. Held by a lab technician at Omni Water Solutions.

Recycling is expensive because the water that comes out of the oilfields needs a good cleaning before it is reused. In a fracking job, millions of gallons of water, laced with sand and chemicals to make the drilling easier, are sent down a well to blast apart rock and retrieve oil or gas. Some of that chemical-laced water comes back up the well along with the oil and gas. Other water that had been underground near the oil and gas deposits also flows back up. This returning water often contains material like boron or sulfates that can impede the drilling process. It can even contain naturally occurring radioactive materials.

“You do see it. We strip it,” Bill Weathersby, chief executive of a Houston-based recycling company, Energy Water Solutions, said of the natural radioactive materials.

Other harmful contaminants must also be taken out, by technologies such as filtration or distillation, before the water can be reused in the oilfields.

A recent study published by the Texas Water Development Board found minimal recycling in many drilling regions of Texas. In 2011, according to the study, recycled and reused water accounted for 2 percent of the total water used in the Permian Basin around Midland, 5 percent in the Barnett Shale near Fort Worth and 0 percent of the water used in South Texas’ Eagle Ford Shale. The emphasis on recycled water was highest — 20 percent of total water use — in the Panhandle’s Anadarko Basin. (The report was written by University of Texas researchers and funded by the Texas Oil and Gas Association.)

In Pennsylvania’s Marcellus Shale, the situation is reversed. About 90 percent of water that comes to the surface during a fracking job gets recycled, according to David Yoxtheimer, an extension associate with the Marcellus Center for Outreach and Research at Penn State University.

A key explanation for the difference lies in the options for getting rid of the water that comes back after a fracking job. In Texas, water not getting recycled is trucked to a disposal well, where it gets buried. Texas has more than 50,000 disposal wells for oil and gas waste, according to the Railroad Commission of Texas, which regulates oil and gas drilling.

Pennsylvania, by contrast, has about five disposal wells, according to Yoxtheimer. That’s because of different geology and tighter regulations.

“It is a little backwards,” Yoxtheimer said. ”We’re a water-rich state here, and we’re recycling every drop possible,” whereas drought-prone Texas does far less recycling.

Even if Texas companies were able to recycle more water, some waste — such as excessive salts and boron and the naturally occurring radioactive materials — would have to be dumped.

Recycling raises other logistical concerns. For example, water that comes up out of the oilfields (often called “produced water”) needs to be stored more carefully than freshwater. Testifying at the joint House committee hearing last month, Michael Dunkel, director of sustainable development at the drilling company Pioneer Natural Resources, said that if and when his company stores produced water in a pit, it will spend more money to ensure that the pit does not leak. Even so, some risks remain.

“In the extreme, if a tornado comes along and rips everything up, you’re going to have produced water everywhere, and that's different than if that had been a freshwater pond," Dunkel said.

Policy changes may aid the recycling effort. On March 26, the Railroad Commission is expected to vote on a rule that would make it easier for companies to recycle oilfield wastewater. The change would make it possible for mobile units such as the Hippo of Omni Water Solutions, which is currently operating a unit in the Permian Basin, to recycle water near a fracking site. Companies are interested in mobile units because they can reduce their cost of trucking water.

“Water is heavy, and that means it’s difficult and expensive to move it,” Sumner said of Omni.

The commission’s proposed rules contain a number of other provisions. For example, pits holding water for recycling should “not be located in a 100-year floodplain.”

Several bills before the Legislature deal with recycling issues. Senate Bill 1779, by state Sen. Judith Zaffirini, D-Laredo, contains tax incentives for oilfield water recycling operations. House Bill 3315, by state Rep. Jim Keffer, R-Eastland, clarifies that reused water is not a “waste” product — a classification that can trigger additional regulations — and also says that treated water from the oilfields can be used for non-oilfield purposes (such as crops) if it complies with health and water quality standards. Right now, treated oilfield water cannot be used on crops, according to Keffer’s office.

HB 3249, by state Rep. Bill Callegari, R-Houston, also clarifies that recycled materials from oil and gas fields are not a waste product.

HB 2292, by state Rep. Tracy King, D-Batesville, is stricter: It would prevent oil and gas fracking waste from being disposed of in wells unless it could not be treated and reused.

Recycling industry advocates are also eager for incentives. A mandate to recycle oilfield water — which is favored by Environment Texas and several other environmental groups — is unrealistic, they say. More practical, they say, is to allow drilling companies a break on severance taxes if they recycle.

Given that the drilling industry is currently hauling in money due to high oil prices, companies may face an uphill battle for special incentives. Brent Halldorson, a founder of TWRA who also works for a recycling company called Fountain Quail, floated the notion of incentives at last month’s joint House hearing. State Rep. Allan Ritter, R-Nederland, who chairs the House Natural Resources Committee, sounded skeptical.

“Good luck with that, sir,” Ritter told Halldorson, to chuckles.

The drilling industry, if it can be persuaded to recycle, has big dreams for the technology. In the distant future, recyclers say, extra water from the oilfields could help solve Texas’ water deficit. Conceivably, after extra scrubbing and regulation (and doubtless extensive discussion of liability issues), it could even be turned into drinking water.

“Is it a possibility? Yes,” Tintera of the Texas Water Recycling Association said of turning oilfield water into drinking water. “Is it technologically feasible? Yes. Is it cost-effective yet? No.”

Sumner, of Omni Water Solutions, said he has drunk water recycled from the oilfields.

This is the third article in an occasional series on water and fracking. The first covered water-supply concerns, and the second covered groundwater groups' confusion over the regulation of water for fracking. More articles in this series, which is a collaboration with StateImpact Texas, will run in the coming weeks at texastribune.org and stateimpacttexas.org.