Local school districts can grant property tax exemptions as economic development incentives. We asked the insiders this week who should make those decisions: The districts or the state — which bases its school finance formulas, in part, on how much money is produced by each district’s local property taxes. A small majority said the state should not have control, while 45 percent said it should.

Maybe it won’t matter for long, as 58 percent of the insiders said major tax revisions are coming in Texas. They differed a bit on when, with 51 percent saying those revisions will come after the courts are finished with school finance lawsuits. Another 38 percent don’t expect major changes.

Most of the insiders don’t believe John Cornyn will have a serious GOP primary challenger in 2014 and about the same majority — 58 percent — do not believe his political future is at risk.

As always, we gathered commentary as we went along. A full set of verbatim comments is attached, and a sampling follows. 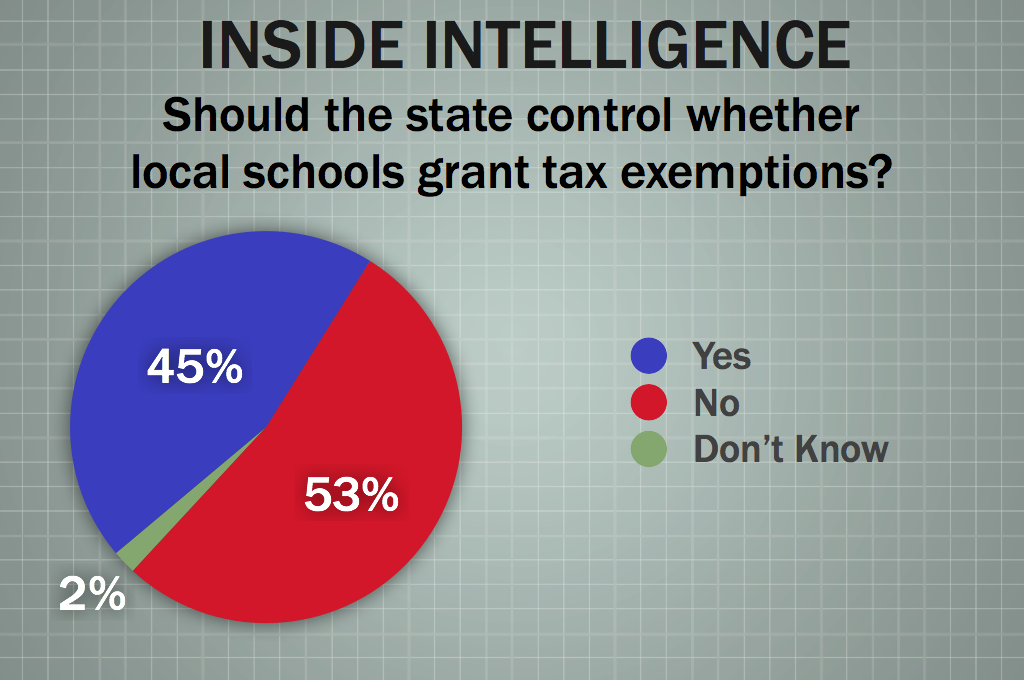 Should the state control whether local school districts grant property tax exemptions for economic development and other purposes?

• "This should be a local decision."

• "As long as we are in this unwieldy 'recapture' system, and exemption in Tyler ISD screws up the numbers for everyone. Once we fix this, with a statewide property tax or other revenue option, this will not be an issue."

• "It's difficult to come down hard on one side or the other because the state, or the other school districts, will eventually have to make up the money that the district exempts for economic development."

• "The reality of local control of school district finances died after Edgewood II. We're just pretending now. The state runs finances, and should be able to grant whatever tax incentives are necessary for competitiveness."

• "There should be some boundaries set by the state, but control should still primarily rest with local school districts."

• "We have way too many property tax give always and the only ones being stuck are homeowners."

• "If the ISD wants to eat the cost of an exemption, that's not the state's issue; but if the state is equalizing funding to the lower property values, then the state should have approval authority" 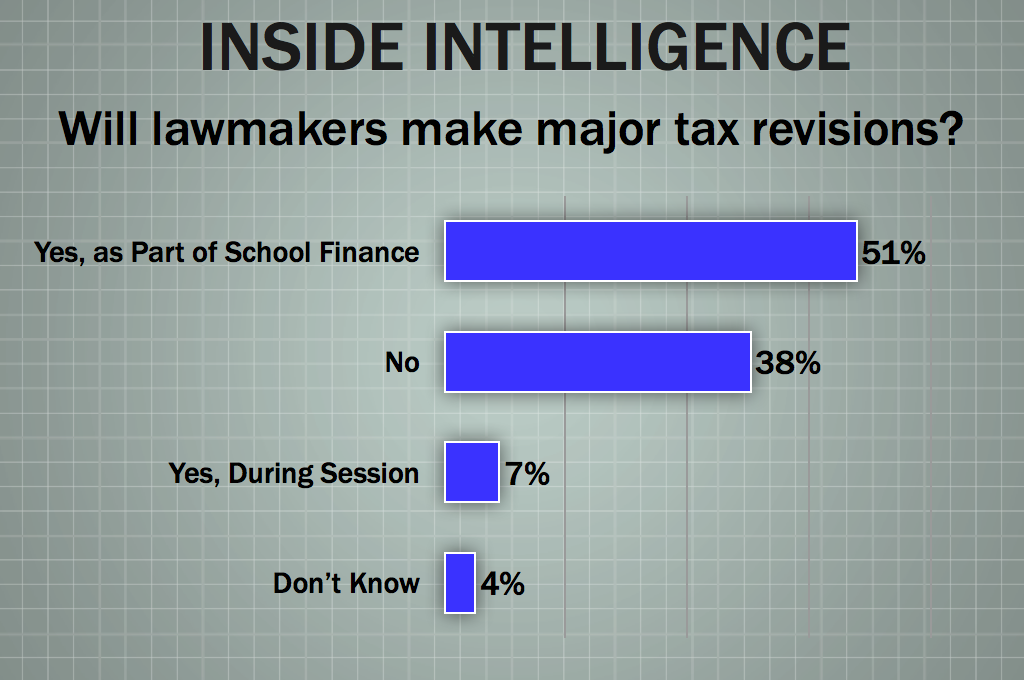 Will legislators make major revisions to state and local taxes?

• "'Major' is in the eye of the beholder. They will amend the franchise tax but not repeal it. They need to leave it in place as the bottom floor to potentially address school finance and ad valorem taxes next session."

• "Minor tweaks this session. Major overhaul after the TXSC is done, assuming they uphold the district court's findings. If they reverse course, then all is well and nothing to see here."

• "The small-business exemption is a slam-dunk. Some changes in Chapter 313 are likely -- hopefully shrinking the program, which the Comptroller has let run totally amok. R&D tax credits are way too expensive. And swapping property taxes for sales taxes works only in TPPF and Debra Medina's dreams."

• "Tax INCREASES are reasons to UNELECT officials before, during or after a session."

• "Only major tax changes will be those forced by the courts" 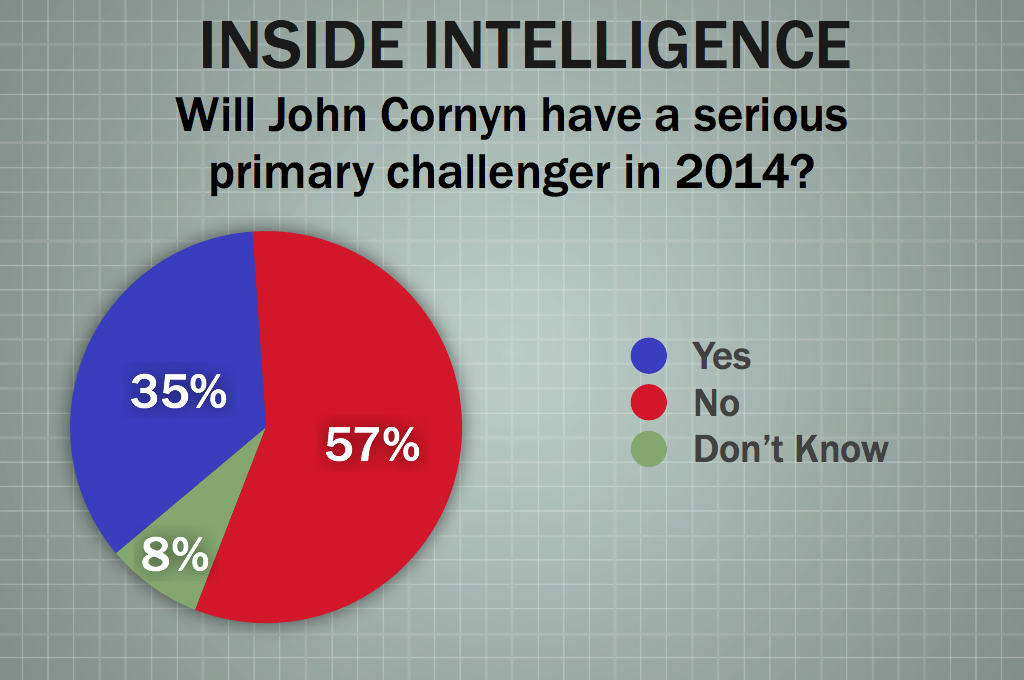 • "The Wack-A-Doodle tea party will put up a challenger to Cornyn but he/she will not get serious traction in a regularly scheduled primary and in an off election year."

• "Cornyn seems to think he will. Otherwise, he wouldn't be saying 'me, too' to everything Ted Cruz says. After all, who's the senior senator here?"

• "With Senators Paul, Cruz and Lee making so many headlines and chipping away at the Obama administration, someone is going to try to replicate Cruz's victory in Texas."

• "He'll have a strong record he can defend against any primary opposition and he'll work hard to do so."

• "He certainly doesn’t deserve one. Senator Cornyn is a serious conservative who gets things done in DC. He is also one beat away from being the GOP leader in the Senate."

• "It depends on what your definition of 'serious' is. No reasonable person would have considered Cruz serious two years ago."

• "He's fortunate, because there is no Cruz-quality challenger for him on the horizon."

• "Too early to tell but it is very possible"

• "Cornyn is the most articulate and well-liked leader in Texas and one of the best campaigners. He has a strong record standing up to the president and has not given any Republican a reason to challenge him. Whatever hapless Democrat they put up against him will be lucky to pull 40%."

• "But keep your eye on Dan Patrick" 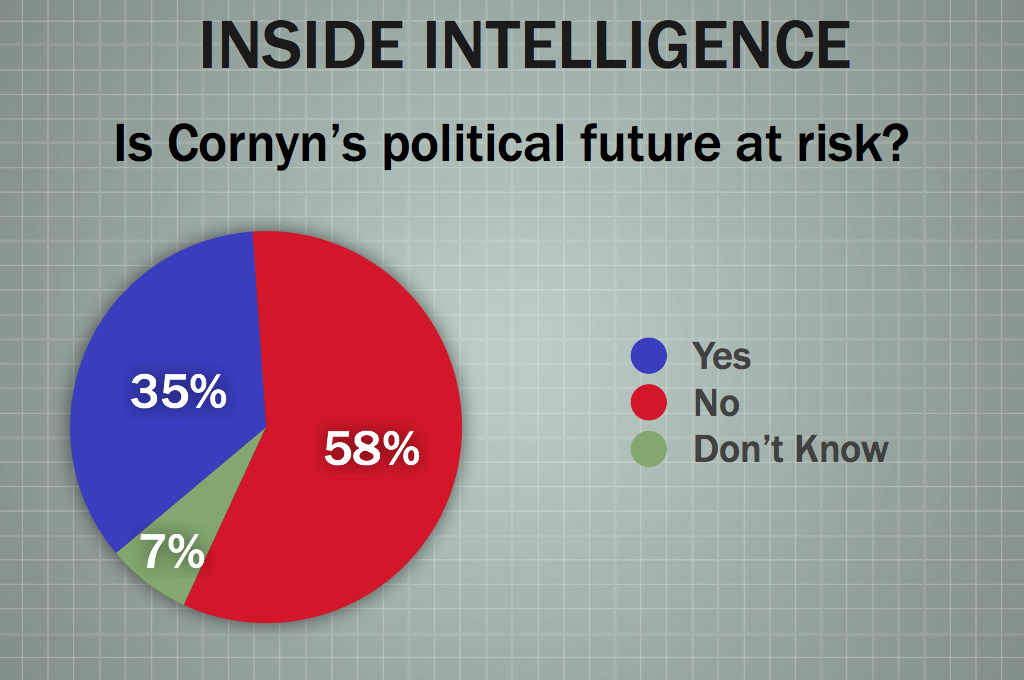 Is Cornyn politically at risk, given the current mood of Republican voters?

• "Cornyn has proven conservative credentials, is the incumbent, and the timing is not good for a challenger (regular primary and off election year)."

• "Cornyn has been a conservative stalwart since his days on the Texas Supreme Court, as Texas Attorney General, and as U.S. Senator. If anyone thinks otherwise, they're either new to Texas politics or have short memories."

• "Cornyn would have been at risk in the previous two cycles of rabid idiocy. Calm seems to have come to the majority who want a competent class in elected office. You may not like Cornyn, but incompetent he is not."

• "While he is somewhat worried, as his recent voting behavior demonstrates, there doesn't seem to be strong groundswell of dissatisfaction with Cornyn the way some of his Republican colleagues experienced in 2010 and 2012."

• "The Cruzquester was a perfect storm. No such candidate or circumstance exists in this upcoming primary."

• "His vote for the bank bailout and the perception of him as an establishment Republican makes him vulnerable to a well-funded primary challenge."