Lawmakers are considering — once again — a pay raise for judges in the state, a conversation that always includes a comparison of those salaries to what lawyers in the private sector make, and a reconsideration of whether lawmaker pensions should be linked to judicial pay.

We put those questions to the insiders this week. As you can see from the charts, they think judicial pay should be increased, that current pay levels keep good prospects off the bench, and that lawmaker pensions should be unlinked from judicial pay. They also said that linkage helps, rather than hurts, efforts to raise judge’s salaries.

As always, we’ve attached a full set of the verbatim answers to the survey, and a sampling follows. 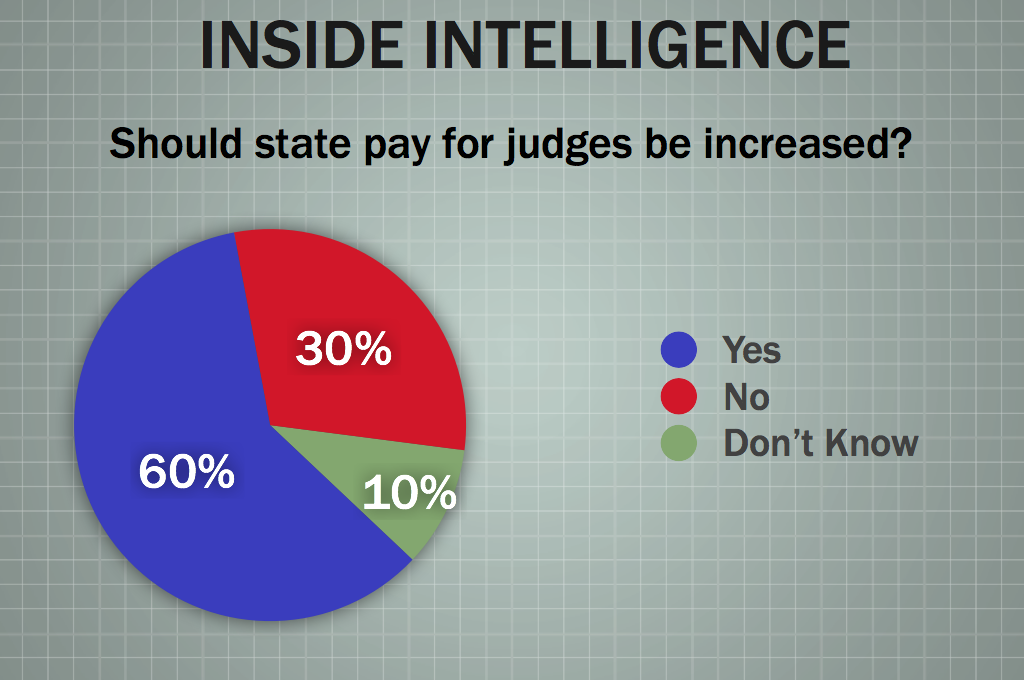 Should pay for state judges in Texas be increased?

• "The salaries are low compared to big firm business litigators, but not for the vast majority of family, criminal, juvenile justice, etc. lawyers."

• "If Judges want their pay increased, they can go into private practice."

• "As with everything else, quality comes at a price."

• "According to the Judicial Compensation Commission's latest report, our judges have not had a pay raise since 2005. When was the last time you went 7+ years without a pay raise?"

• "They are civil servants but they should not have to struggle to make ends meet given the education requirements to be considered for the role."

• "We under-pay everyone else so chances are excellent that applies to judges."

• "Why should judicial pay be increased but not teachers? It's a service and an honor to serve and appropriate to come with some salary hardship." 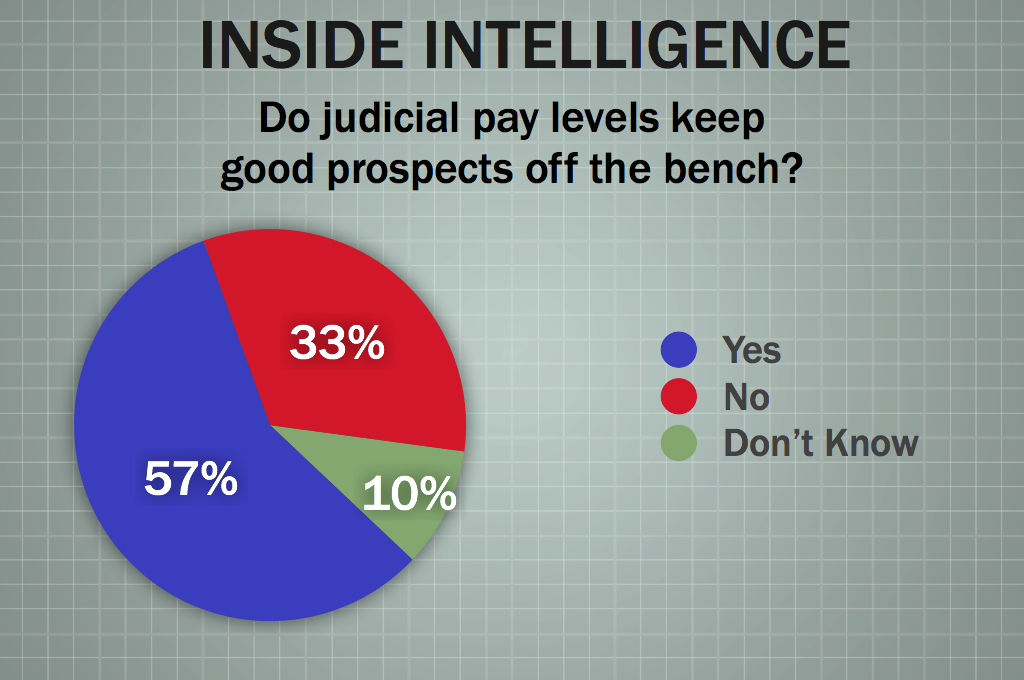 Does a differential in private pay for lawyers and public pay for judges keep good jurists off the bench?

• "Lawyers with booming practices hesitate to serve -- both because it may be a pay cut and because our partisan election system can 'fire' them at a whim. Why risk a good business for such uncertainty?"

• "Absolutely not. Partisan elections of judges keep good jurists off the bench."

• "Being a judge isn't about the money. There are other benefits such as less pressure, being in charge of your own schedule, self satisfaction of the job, more respect from the community, fewer hours per week, etc."

• "There are plenty of good candidates for any opening."

• "I want jurists on the bench who truly want to serve - not because of the paycheck."

• "Texas judges are paid well more than the average lawyer but much less than the much smaller number of lawyers at the top urban Texas law firms. Many good judges choose their jobs are preferable to the maximize your billable hours pressure of top firms."

• "The lucky few who secure those Big Law jobs right out of law school (or after a judicial clerkship) start off at a higher salary than that of the Chief Justice of the Texas Supreme Court. That ain't right. We should want our best and brightest legal minds to serve on the bench, but many have families to support. It's an incredible sacrifice to them and their families to ask them to accept such huge pay cuts. I guess that's why it's called 'public service.'"

• "If you're running for judge to get rich, you probably shouldn't be a judge."

• "A state district judge's salary clearly places the judge in the top 5% of all earners in this country. While a judge's salary is lower than their private counterparts, a judge has made a decision to trade income for power. In the end, a higher salary wouldn't get you better jurists just greedier ones."

• "Maybe. I'm sure the differential in pay for teachers keep many highly qualified people from being teachers and educators. We ask those folks to sacrifice a lot more for a lot less than we ask our Judges." 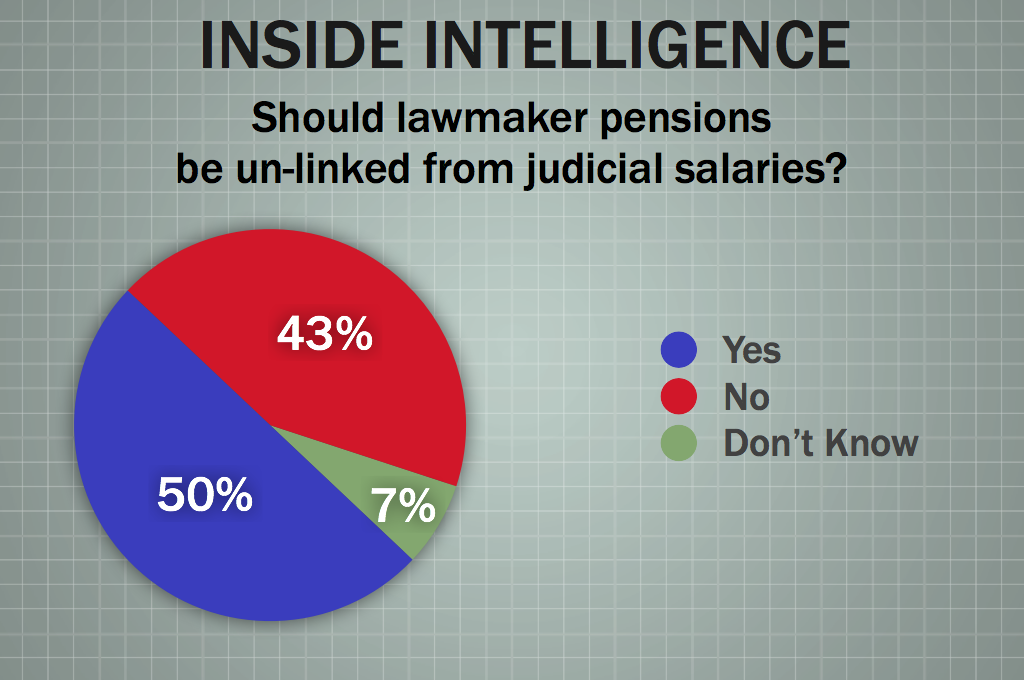 Lawmaker pensions are based on judicial pay; should they be unlinked?

• "That's the only security judges have! It's a fair trade for the public service and lower income."

• "Lawmakers pensions should be linked to something over which they have no direct control. Why not tie their pensions to per capita income? This way, if the 'people' of Texas are doing better, so will the lawmakers."

• "Covert way to help legislators without them actually voting on the benefit to them."

• "Come on! Really? Tie it to the average teacher pension and watch teacher salaries rise as a result."

• "No, unless we are going to pay our 'citizen legislators' a living wage. Lawmakers should first and foremost be paid for the full-time job they have."

• "I'm not sure they should get pensions at all. It's a part time job."

• "But only in the context of changing the way legislators are compensated. It is almost impossible for most Texans to be a member of the legislature because of the way they are compensated. Some provision needs to be made for retirement, but the current system goes over the top on the retirement side to offset the low compensation for the job."

• "And base lawmaker retirement on $7,200 per year when they sacrifice years of earning potential to serve in the Lege - years during which they might have funded a retirement account were it not for the public service? Uh, no."

• "It’s the only way either side gets paid." 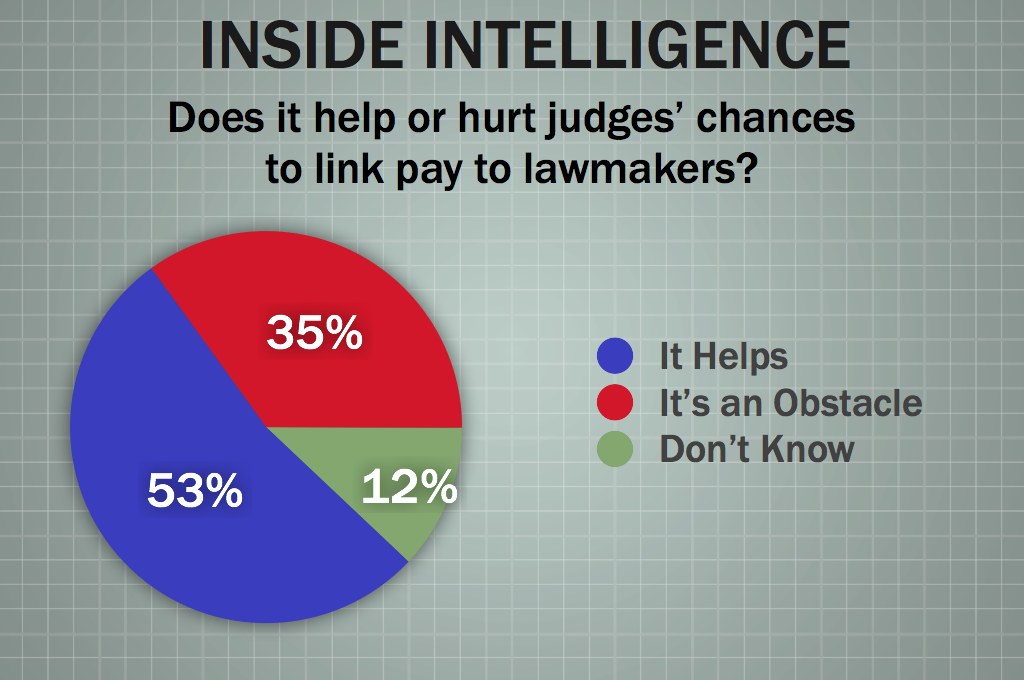 Does the link to lawmaker pensions help judges get pay raises or create an obstacle for them?

• "The problem with tethering is that it allows the primary opponent to argue that a legislator voted herself a pension increase when what she did was vote for a pay raise for judges."

• "If the legislature raises judicial pay, the campaign ad simply says member X increased his or her own pension."

• "State lawmakers have a personal financial interest in boosting judicial pay. It would be corrupt if it weren't the law."

• "More often than not it keeps judicial salaries low because lawmakers are hesitant to raise their own salaries -- or they should be."

• "Of course it's an obstacle. It's been 8 years since judges last had a raise! The linkage benefits lawmakers, not judges."