This week, we asked the insiders about gun laws, abortion restrictions, school vouchers, and the Voting Rights Act, and the results start with a 50-50 split.

Asked to choose between two descriptions of publicly funded private school vouchers, half of the insiders said vouchers give parents the opportunity to move children from failing schools, and half said they remove state funds from the schools that need them most.

More than half of the insiders oppose Gov. Rick Perry’s proposal for a “fetal pain” bill that would outlaw abortions after the 20th week of pregnancies, with twice as many strongly opposed as strongly supportive.

A slight majority — 53 percent — said they would favor a ban on high-capacity magazines for guns. And 85 percent support criminal and mental health background checks on all gun purchases, including  gun shows sales and private sales. 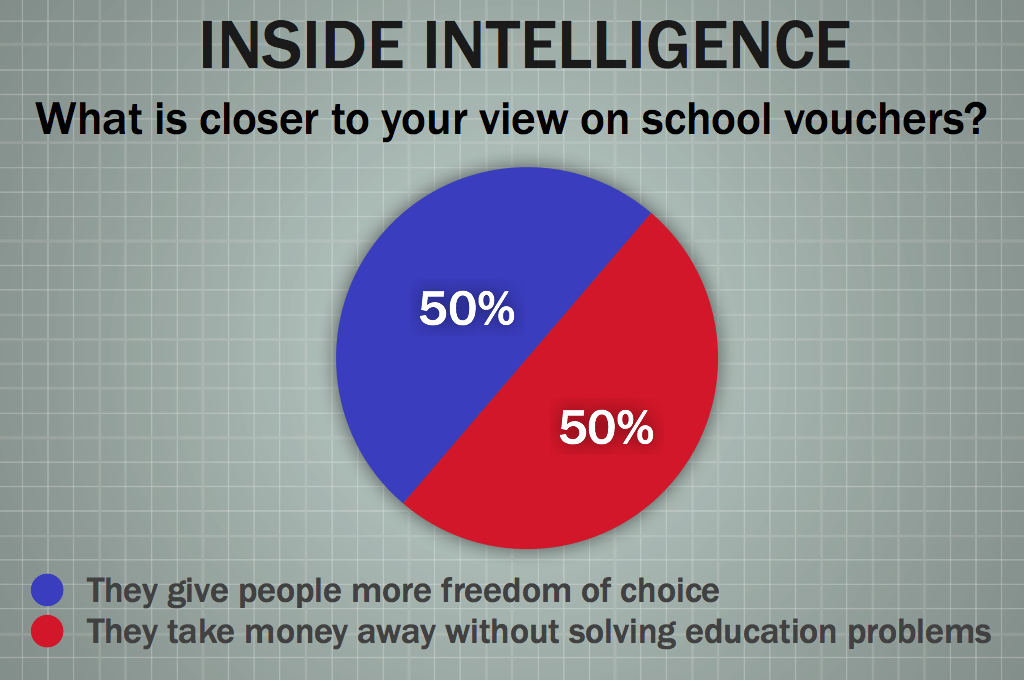 With the U.S. Supreme Court hearing a challenge to a key section of the Voting Rights Act, we asked the insiders whether Texas ought to remain under federal oversight when changing its election laws. A majority — 52 percent — said no.

The full set of verbatim comments to our questions is attached, and a sampling follows. 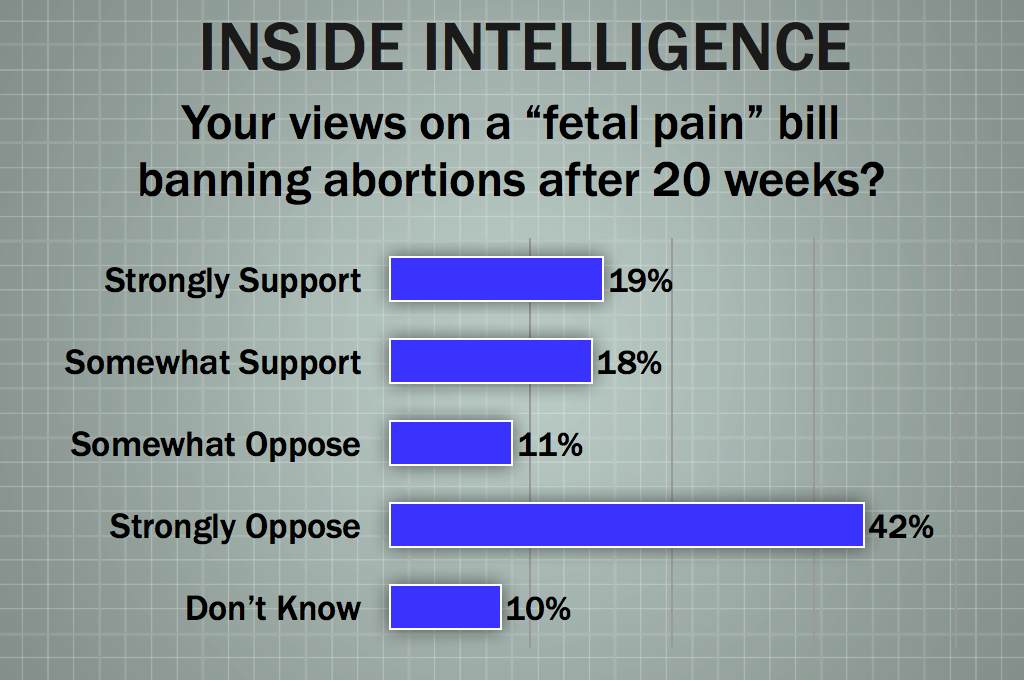 There has been a lot of talk in the news lately about school voucher programs that would enable parents to move their children into other public or private schools. Which of the following positions do you prefer?

• "Texas public schools are on fire. Until we fix public school finance, vouchers and charters are a distraction at best. Let's focus on serving the other 95% of students first."

• "'Excellence demands competition. Without a race there can be ...no excellence- in education or in any other walk of life.' --Ronald Reagan"

• "What about just letting students and their families have access to the schools - public or private - that suit them best and sending the money to the schools they choose? All students in the public deserve an education from the public. Why does that mean government monopoly schools?"

• "Moving to another PUBLIC SCHOOL would not cost a dime more. That's what I support."

• "Every student and family should have a choice of schools. At present, only the wealthy do." 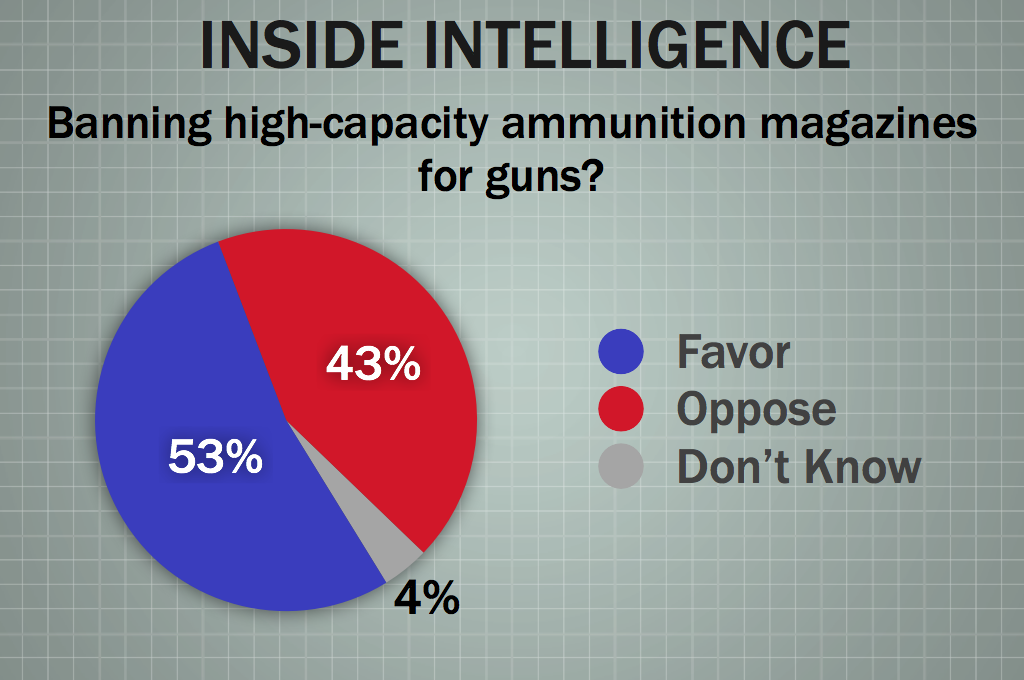 Do you support or oppose a so-called “fetal pain” proposal that would ban abortion after 20 weeks?

• "Red meat for South Carolina. Being held captive by Governor Perry's ambitions in 2011 was maddening. Now it's just a slow car wreck happening before our eyes."

• "Get government out of our personal decisions."

• "Lots of critical issues facing Texas--education, water and transportation just to name a few. This divisive social stuff is old hat, and is stopping Republicans from attracting younger voters. This is the kind of stuff that the Battleground Texas people dream about."

• "Support--but 'pain' shouldn't be the issue. That implies it is acceptable to terminate a life that doesn't feel 'pain,' and that type of mentality leads to eugenics and worse." 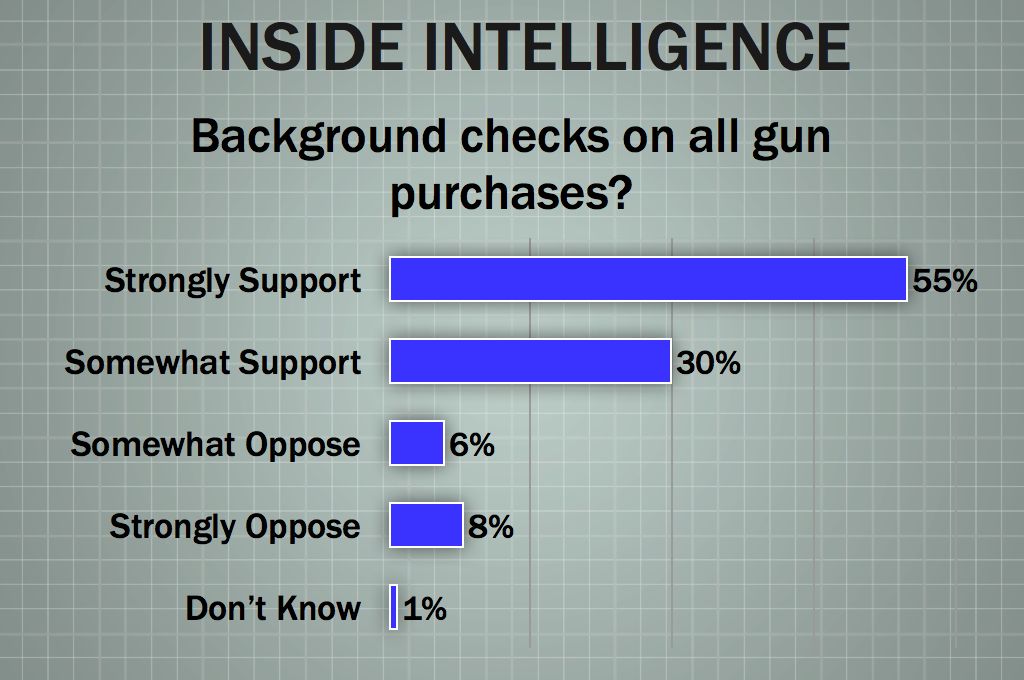 • "Such decisions should be made by women and their doctors."

• "Though detest the incrementalism. Abortion should be illegal, in spite of what the Supreme Court has held. It was illegal in Texas before Roe v. Wade. We should follow our own law and remove the exception for mothers and doctors that was added to accommodate the Supreme Court. It certainly wouldn't be the first time Texas has challenged the federal govt."

• "Fat, old, white guys should not be making decisions for women." 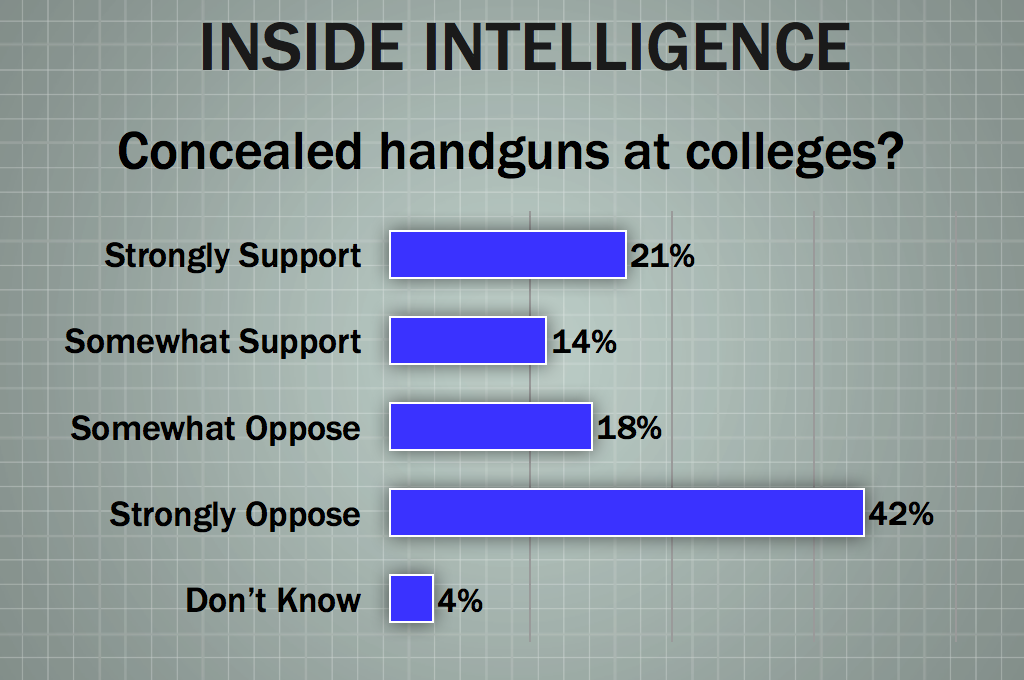 • "What exactly are people so afraid of that they need this kind of firepower? Over-compensate much?"

• "'A well regulated militia, being necessary to the security of a free State...' How can we do that with only 3 bullets in our clip?"

• "As a lifelong hunter, there is no reason for anyone to have high capacity clips. Period."

• "I am not sure the clip debate is fruitful. It strikes me that with each of these shootings, the intent and power are there to act and the clip size does not necessarily change the way these shooters proceed."

• "I guess the bad guys would have to carry more guns to compensate for the fewer rounds in their clips...because, you know, criminals like to follow the law." 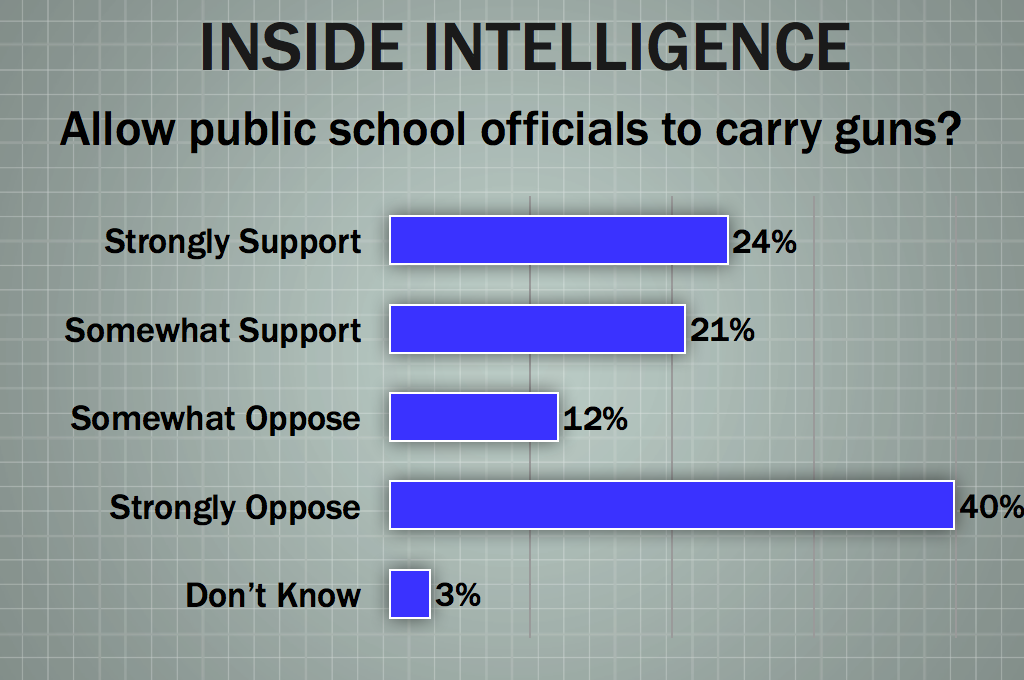 Do you support or oppose requiring criminal and mental health background checks on all gun purchases in the United States, including at gun shows and for private sales?

• "It seems impractical with private sales."

• "I just don't know how you would administer a mental health check other than the absence of a record is the desirable state. Any system has the potential of abuse, more so this one."

• "This amounts to a gun registration program that historically always leads to confiscation of guns."

• "I generally support background checks...the problem is going to be in the regulation of private sales. A background check is already required at gun shows for anyone who is in the business of selling guns."

• "No to private gun sales" 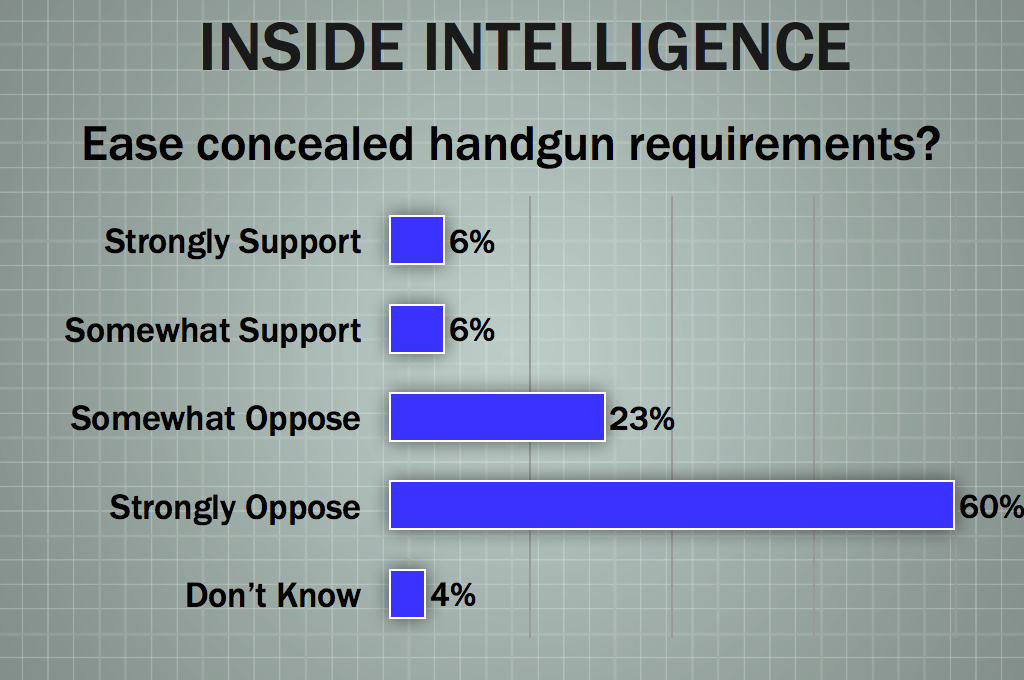 Please tell us whether you support or oppose the following proposals on guns currently being discussed in the Texas Legislature: (guns on college campuses, concealed weapons for teachers or other officials at public schools, easing CHL requirements)

• "We need to abandon the fiction that 'gun-free zones' actually keep out bad guys with guns."

• "What is this--Gunsmoke with Marshal Matt Dillon? Guns in schools and on college campuses only endanger my kids, not protect them."

• "Regarding public schools, I don't think the teachers need to have them in the classroom, but I do support other trained/vetted school staff having access to firearms."

• "While I believe more guns in the hands of law-abiding citizens is a positive, I believe individual campuses should be able to make their own decisions. That way parents and students could make the decision on where to attend college."

• "Current CHL classes are a joke. Probably 15-20% of the legal information conveyed by my instructor was incorrect. I have no problem with letting people be armed, but let's at least train them properly on the law and on proper procedures/techniques!"

• "We've got multiple issues here: constitutional right to arms, right to self-protect, proper training, etc. I don't think anyone is advocating allowing anyone and everyone to carry without some sort of training (military, CHL, law enforcement, etc.). Those who are responsible enough to seek and obtain proper training should be allowed to carry free of govt restrictions on where they can carry."

• "If an office rolls up on an active shooter at a school today, it is simple: shoot the guy with the gun. If you allow campus carry, it becomes: which guy with the gun is the bad guy?"

• "Conceptually, 'gun control,' of course misses the point if the point is to ascertain some halfway sensible approach to the reduction of random violence in our society. As usual, what we are seeing here is legislation by headline, which will serve no purpose but to exacerbate the friction that has always been present in this area."

• "If the underlying point of the three choices is that more guns are needed on college and public school campuses, then let's buck up and pay for as many well-trained law enforcement officers as are necessary and let the faculty and students concentrate on learning."

• "More people with guns will not solve the problems. Period." 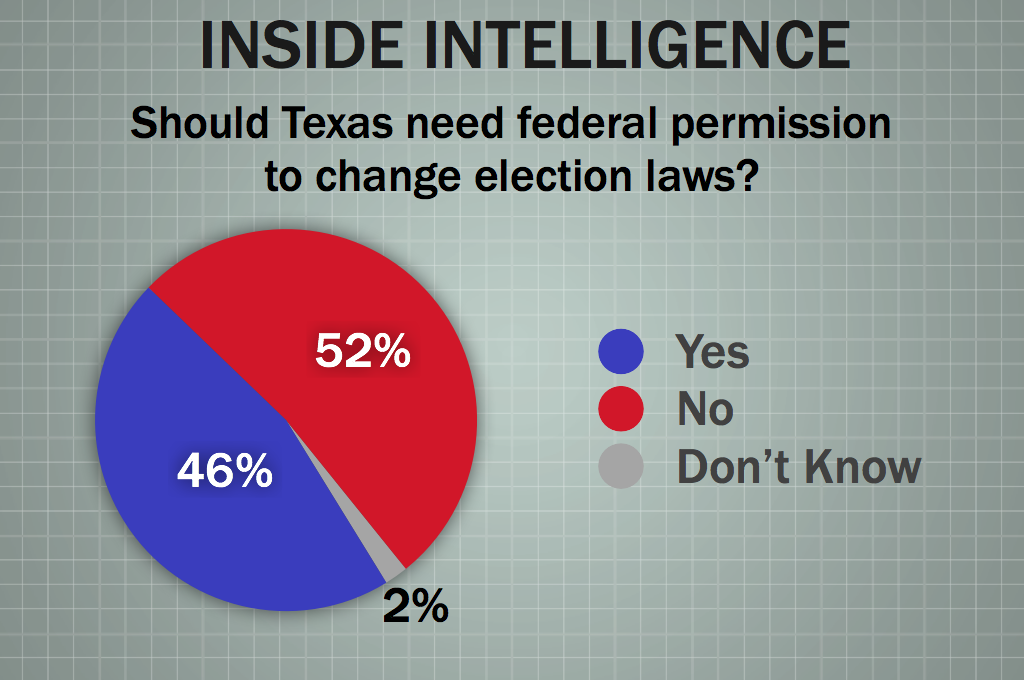 As you may know, Texas has a history of discrimination in its election laws. Because of this, Texas is required to request federal approval before implementing any changes to its voting procedures or election practices. Do you think Texas should still be subject to federal supervision, or do you think Texas should be able to change its voting and election practices without the approval of the federal government?

• "If Texas ever wants to rid itself of the shameful history that created the need for this oversight, it needs to move toward a non-partisan re-districting commission."

• "Either all states should have to go through this process or none should."

• "The VRA as applied in Texas seems geared more toward preserving seats for Democrats than addressing vestiges of discrimination from a bygone era."

• "There is no reason to change the federal approval requirement for certifying the structure of elections. The history in every election suggests that a neutral honest-broker is needed for EVERY state to ensure the redistricting passes muster."

• "It is absurd that Texas is still under this restriction while states including Illinois, Ohio, Pennsylvania, New York and New Jersey, with decades of election corruption are under no supervision at all -- simply because they are northern states."

• "Fewer than 50 years have gone by since passage of the Voting Rights Act. There are at least two generations of voters alive today who witnessed wholesale violations of the most fundamental right of American citizens--to participate in determining the course of our nation. Further, such illegal, unconstitutional and anti-democratic actions by public officials did not end in 1965 but continue. The application of Section 5 of the Act to only a handful of states and localities is indeed wrong--Section 5 should apply to ANY jurisdiction that cannot demonstrate consistent success in ensuring the voting rights of all citizens and providing appropriate consideration for millions of historically and recently disenfranchised voters."

• "The 2011 Legislative session's redistricting/voter ID actions provide substantive proof of the need for Texas to continue to be subject to preclearance."

• "Discrimination was wrong. And is correctly gone. Texas can take care of our own voting laws without federal oversight."

• "Texas is its own worst enemy. If the Legislature could get through a redistricting without obviously attempting to reduce minority representation it might have an argument. Of course, by then the minority population will be too big to get around anyway."

• "I had come to the conclusion that Texas had paid its dues for past discrimination. Then, the last Legislature offered up its redistricting plan. I changed my mind."

• "These preclearance requirements are long past their usefulness. There's no more prejudice or bias in Texas these days than in Connecticut or North Dakota. Unfortunately, the legislature's dumb 2011 voting fraud bill -- inadequate sensitivity to those without a DL -- undercut this reality."

• "The most recent redistricting and voter ID legislation proves that Texas is not beyond federal oversight."

• "To borrow from Voltaire, 'hawks will eat pigeons whenever they find them.'"