Judge John Dietz’s ruling in the latest school finance trial — that the state’s method of funding public education is inequitable, inadequate and requires an illegal statewide property tax — prompted us to ask the insiders about their first impressions. The judge’s written ruling won’t be published for weeks, he said, and the appellate courts will have plenty of time to work after that.

We started there, asking whether the state’s highest civil court is likely to uphold the trial judge’s ruling: 60 percent said they will, though a number said in their comments — found abridged below and in full in the attachment — that the court will uphold some but not all of the ruling.

A majority of the insiders think the ruling will force a tax increase at the state level. Slightly less than half think it will result in higher local school property taxes.

Finally, we asked who — if anyone — is likely to be blamed by voters for the consequences of the ruling. One in eight insiders said nobody will; 44 percent said it will fall on Republicans and 16 percent said blame will fall on incumbents. 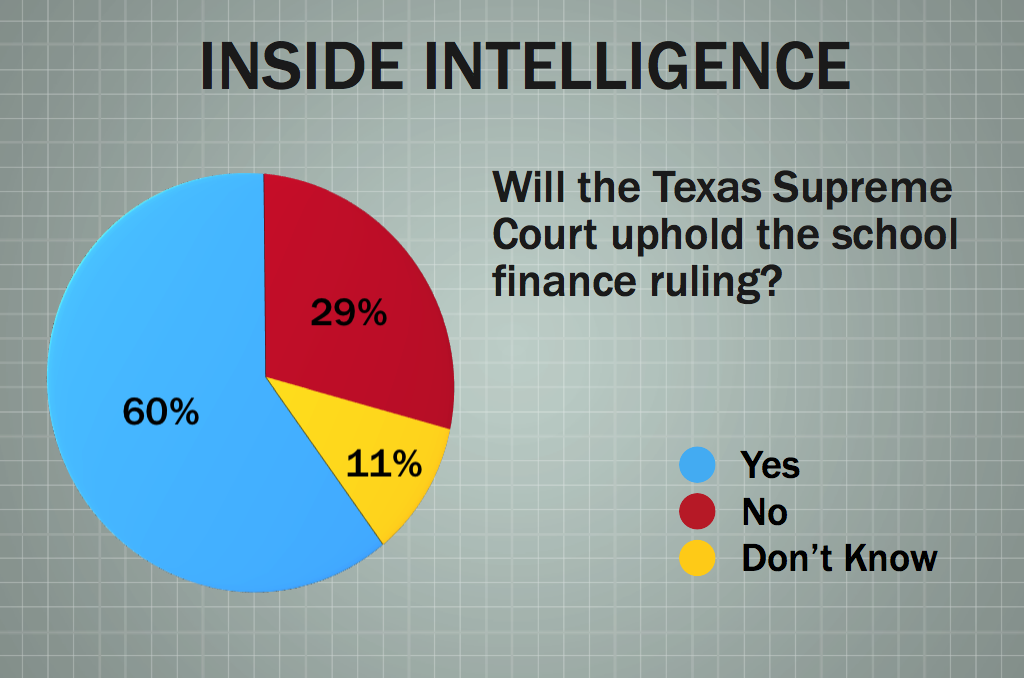 • "Really need the text of that ruling before this question can be answered with any degree of certainty...and even then, is anything certain with this court?"

• "The Supreme Court would have to overturn its previous ruling to reject Dietz's finding on inequity."

• "The Leg blames the Supremes again, politically useful in that it provides political cover for any action on the tax front …sound familiar, same song, next verse."

• "There may be parts they de-empathize to provide the state with a softer decision, but the system too warped to say it meets constitutional standards in all respects."

• "Ridiculous, irresponsible, unfounded opinion by a biased liberal judge. It will almost entirely be overturned."

• "The Supremes will uphold the ruling - late this year or sometime next year. So why are school districts celebrating now? It's like winning the Publisher's Clearinghouse, but being told it may be up to two years before you get your money."

• "The one aspect that the state will have a particularly hard time defending is that of inequity.  The rather unjustifiable differences in the amounts that school districts receive in the system are likely to bring this thing down.  There's no explaining it away."

• "Our activist SC writes more laws than the legislature.  They will write this one, but will punt the final funding and solution to the legislature and call it conservative."

• "The judge dusted off his prior ruling, changed the dates and dollars, and reordered it as expected. The high court struck down much of his previous ruling so we will see."

• "I am afraid the court has become too much of a creature of the Executive branch." 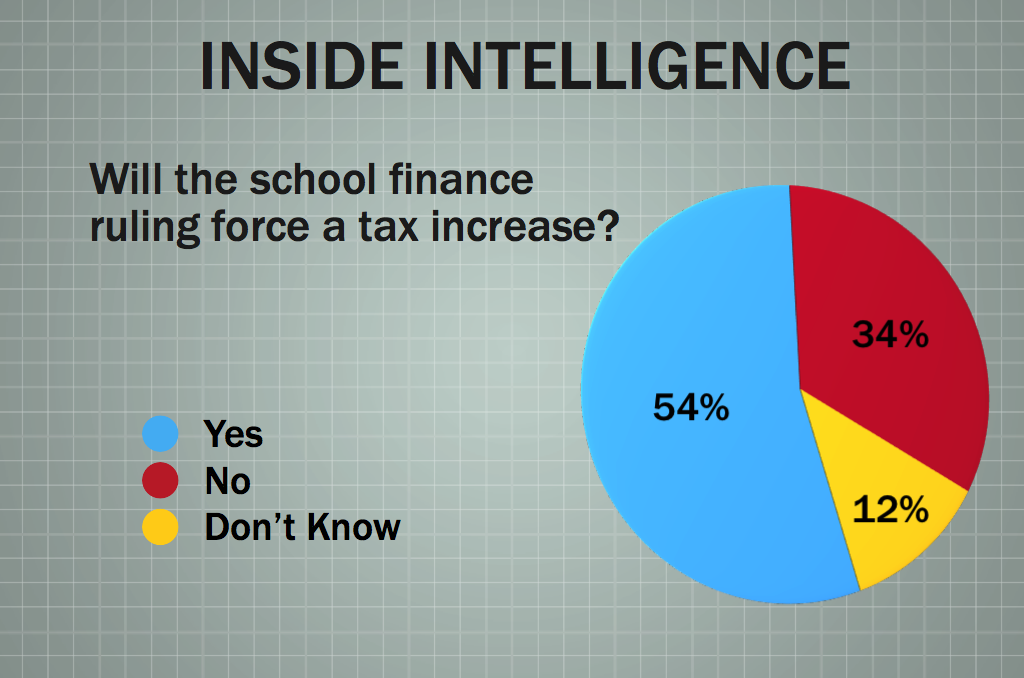 If upheld, would the school finance ruling force a tax increase of some kind?

• "It might in certain school districts, but it could actually lower local school taxes if districts get to keep all the money they raise."

• "The money the state cut from the budget in 2011, if returned, plus savings by eliminating the Target Revenue and other Hold-Harmlesses provides enough money for a strong first step.  Phasing in other required improvements will run concurrent with the improving economy."

• "If the court finds against the state solely on inequity, the solution can be to take the rich down to where everyone else is.  That doesn't cost the state anything, financially speaking."

• "If it means shutting down public schools, this Legislature will not raise taxes."

• "It would force the state to utilize the resources it has to FULLY FUND public education in this state!  It would require districts to use money for the purpose which it was intended - the EDUCATE students!  Reduce the size of the 'district office' staffs and put teachers in classrooms."

• "At the minimum, this undermines posturing for a tax cut"

• "If it's $10 billion underfunding, absolutely.  But it won't be.  Look for gaming to come back into the picture." 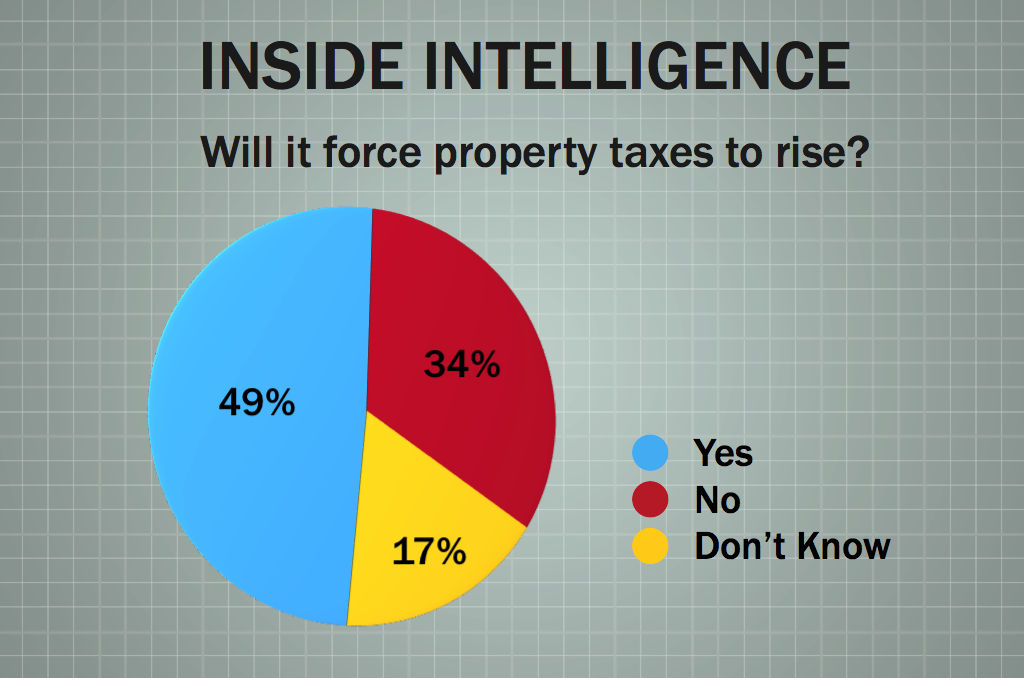 If upheld, would the school finance ruling force an increase in local property taxes?

• "Probably not, assuming that the leadership protects the property tax relief fund."

• "Maybe not 'force,' but possibly result in one."

• "Wasn't this (hasn't this) been the basis for the flawed funding to begin with?"

• "Always does (eventually). And when too many districts are forced to go that route, that's the cue to file the next lawsuit against the state."

• "The 3 most likely sources for new state revenue seem to be 1) raising sales tax rate, 2) raising franchise tax rate, or 3) raising property tax rate.  Good luck choosing the one that can pass."

• "Why would taxpayers approve a local tax increase only to have the revenue diverted to another school district?"

• "It should force a more statewide approach.  Local tax disparities got us here."

• "Local property taxes will not be FORCED to go up, but local school will go up on them anyway and then blame the legislature.  Its tradition for them to do so."

• "Since a quarter of the districts are already maxed out on their tax rate, it's hard to avoid a ruling that this is (once again) a state property tax.  Since the state still hasn't been able to make up for the revenue lost to the 2006 forced school property tax cut, the only option will be to let the districts (with voter approval) raise their local rates even higher.  Or give up on getting kids to pass tests." 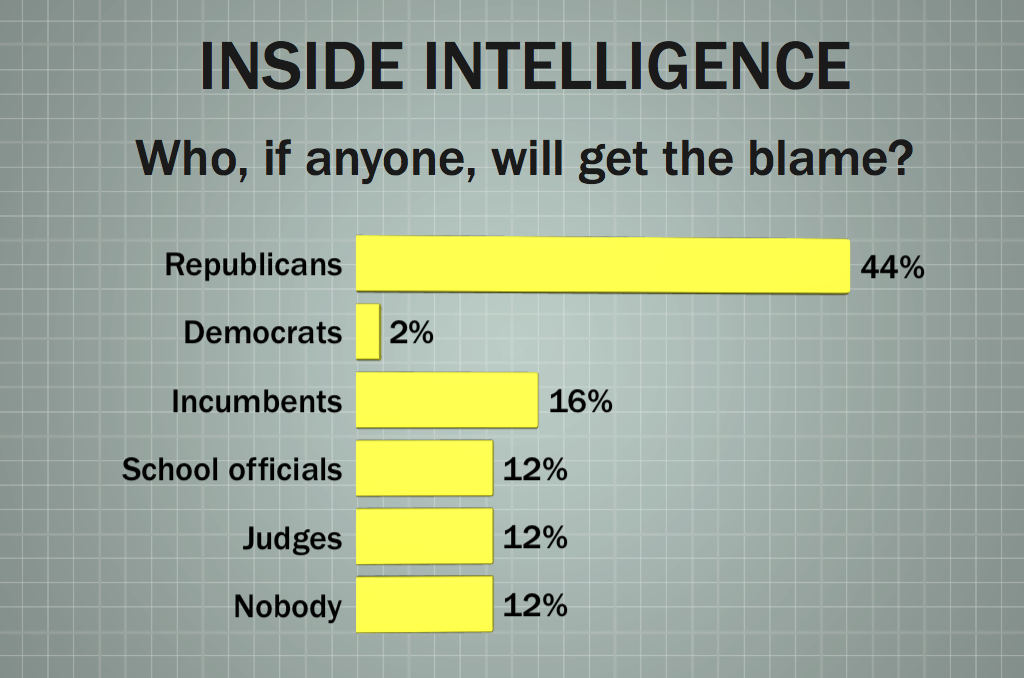 Who, if anyone, will voters most blame for the consequences of the ruling?

• "Everyone will point fingers at each other."

• "You did not list my preferred answer. To quote the great Jo Carol Pierce, I blame God."

• "I actually think people could end up happy about this in the long run and will blame no one!"

• "The way things are set up, all sides can point somewhere else to assess blame."

• "You should have as a choice: 'Everybody named above, plus everyone not named, but not me.'"