This week, we asked the insiders to rate the chances for some of the ideas in Gov. Rick Perry’s State of the State speech.

The governor proposed setting aside $1.8 billion in the Rainy Day Fund for tax breaks and asked lawmakers to approve a constitutional amendment that would make refunds legally possible. The insiders don’t think that’ll happen: 54 percent said lawmakers won’t go along, and only 37 percent said they would.

The idea of letting South Texas colleges and universities tap the Permanent University Fund — an endowment for higher education — split the insiders, with about as many saying it would fly as saying it wouldn’t. A healthy number — 16 percent — were undecided.

Perry’s call for $3.7 billion from the Rainy Day Fund for water and transportation will probably pass, according to 83 percent of the insiders. Another 12 percent said yes, but for water alone.

Finally, Perry suggested in his speech — and then spelled out on his government website — some ideas for tax breaks. The most popular among the insiders include making small business margins taxes permanent, lowering the rate for that tax, and increasing the size of homeowner exemptions from property taxes.

A full set of verbatim responses is attached. Here’s a sampling: 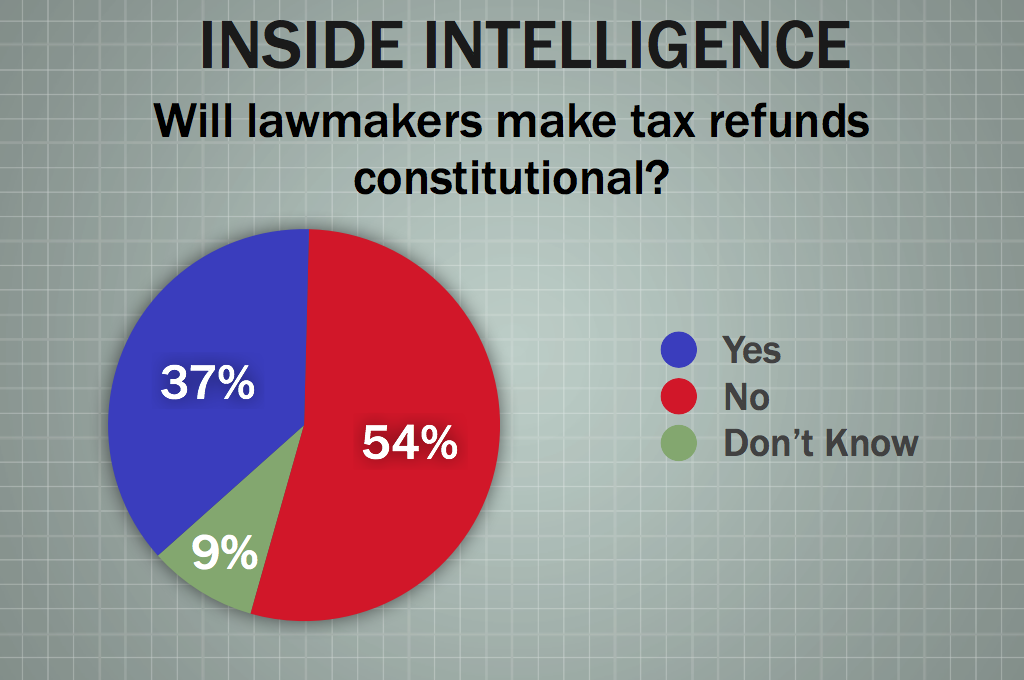 Will lawmakers approve the governor’s proposal for a constitutional amendment allowing tax refunds?

• "Which legislators in their right minds would vote against letting the taxpayers grant them permissions to give the taxpayers their money back?"

• "Using our tax dollars to GROW government, rather than for the purpose they were originally collected is wrong. Taxpayers will want this refund."

• "Ongoing commitments and structural needs like roads and water should be paid out of our regular budget. The shell games and the political posturing is no way to run a state."

• "Getting a bill that 2/3 of the Lege will agree to won't happen. Business pays most of the taxes, and will fight the proposal to give the money to households. And tracking individuals by address is Big Brother."

• "The reality is money has to be left on the table for Education funding.  Even if they don't increase the amount going directly to schools any rewrite of the formulas will cost money to hold everyone harmless."

• "Hope not.  What a waste of state funds, primarily sales tax.  If we don't want to spend it, set it aside just like the rainy day fund to help when times are bad or for infrastructure development."

• "Are you kidding?  What politician would vote against giving money back to his or her constituents."

• "Master stroke from the wounded bear in the Governor's Mansion.  How does nearly 2/3 of the House NOT go along with 'letting the voters decide'?" 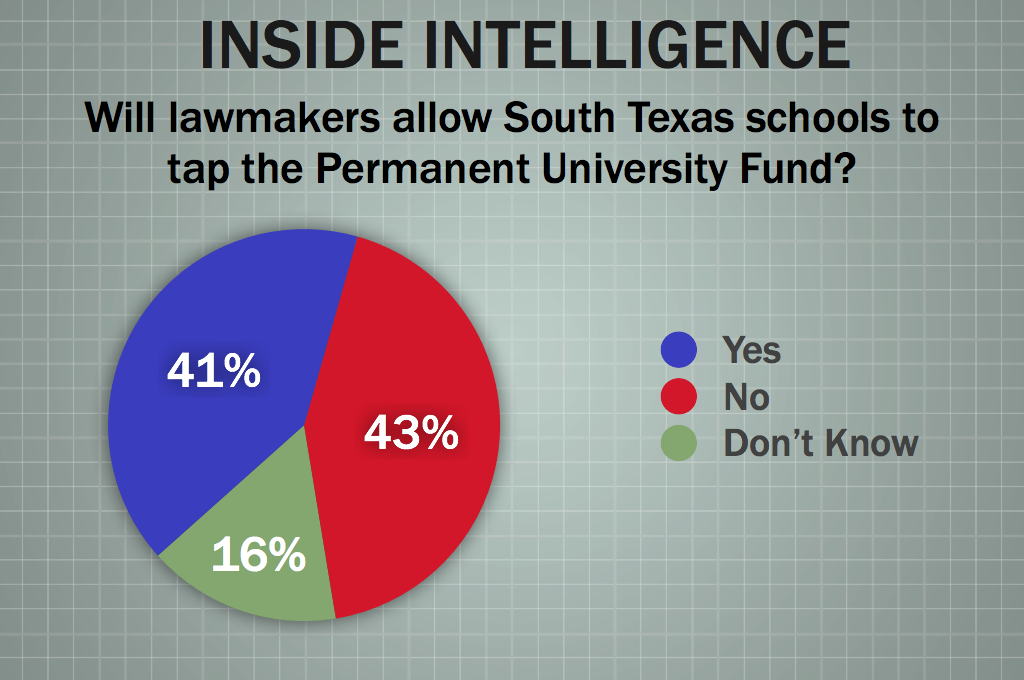 Will lawmakers approve the governor’s proposal for a constitutional amendment allowing South Texas schools to tap the Permanent University Fund?

• "Why not? Every taxpayer dime should be spent for the purpose it was collected. And recipients should be accountable."

• "Have you seen the strength of UT and A&M alums. Go ask Senator Duncan!!!"

• "No way this gets passed...but the Governor gets to say to South Texas voters 'Well, at least I tried.'"

• "Maybe we should skip the tax relief and send that GR to South Texas Schools, preserving the Permanent University Fund for its intended purpose."

• "Republicans in Texas cannot afford to be seen as snubbing South Texas. Democrats, as they do with everything, will try to use this as a racial issue." 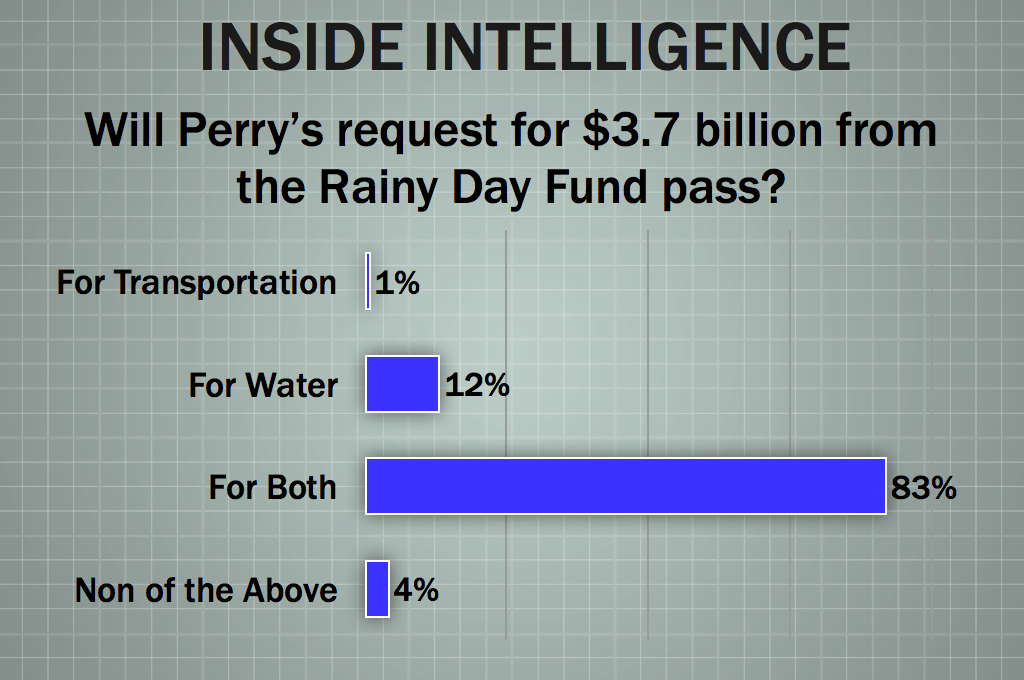 Will lawmakers go along with Perry’s plan to take $3.7 billion from the Rainy Day Fund?

• "Anytime THIS governor suggests taking ANY money out of the Rainy Day Fund, the legislature had better jump on it."

• "Bond guarantees for infrastructure is better policy than raising taxes."

• "Maybe not the full $3.7, but yes.  And they will find a way to help spend it so it doesn't count against the spending limit.  Where there is a will there is a way."

• "The transportation aspect is a slam dunk. Throw in water needs (which have traditionally had a harder climb) and you address both the paved and parched."

• "Water will definitely get funding.  Transportation is more questionable, because there's not a plan out there yet."

• "One time money is not the solution to either problem... state government has been in denial for the last 20+years... user fees to support both programs... remember, pay as you go!"

• "One time expenditures for roads and water are a no brainer.  The Rainy day fund will be spent down, if not on infrastructure, then something else."

• "If only restoration of cuts to pre-k resulted in decades long public works contracts worth hundreds of millions of dollars."

• "Too many well respected old bulls who aren't big spenders are behind both water and transportation.  Of course, who knows what items the Governor will take up that come in from the Internet." 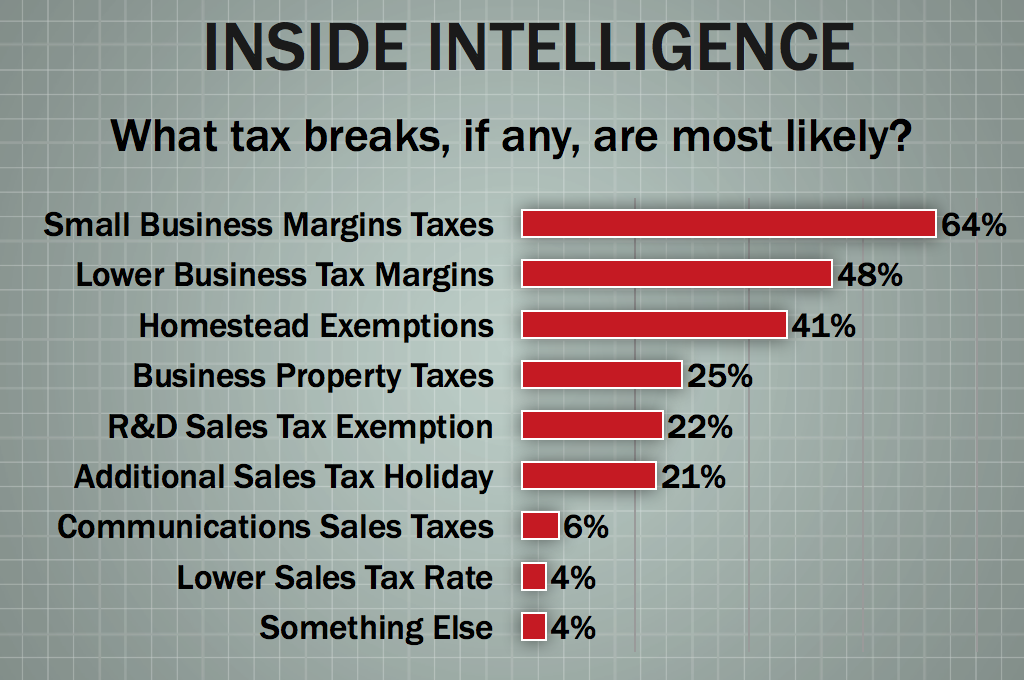 If the state does allow tax breaks, which are the most likely?

• "This array of refund options should be entitled, 'The Lobbyist Full-Employment Provision.'"

• "It needs to be a one time rebate or reduction.  He shouldn't put the legislature in the position to have to raise taxes in future sessions."

• "The criteria applied will be: how does this benefit the governor?"