In his State of the State address on Tuesday, Gov. Rick Perry touted the $10,000 bachelor's degrees Texas universities began offering in 2011, when he first challenged them to do it.

“There were plenty of detractors at that time who insisted it couldn't be done,” Perry said. “However, that call inspired educators at colleges and universities across our state to step up to the plate.”

And not just in Texas. Perry said interest in $10,000 degrees is spreading nationally, picking up steam in Florida and California.

But now that they exist, how can cash-strapped Texas students get them? The Texas Tribune has assembled a handy guide to help students find the new $10,000 degrees, which can be accessed by clicking on the picture below. 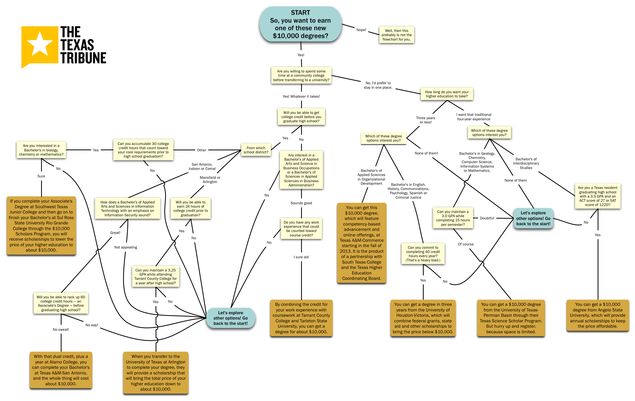 Whether or not one of the $10,000 programs that have been created in response to the governor's call is a good fit will depend on a number of factors: what subject students want to study, where they want to attend college, which programs they qualify for and how hard they are willing to work to keep the price of higher education low.

In March 2012, the Tribune made its first guide to how to get a $10,000 degree. It was easy to make, because at the time, only one was officially available: a bachelor’s of applied arts and sciences in information technology with an emphasis in computer security from Texas A&M University-San Antonio. Due to its requirements, very few Texans could actually get it.

Less than a year later, there are several more options.

In his address on Tuesday, Perry cited a total of 13 $10,000 degrees in the state. Though he originally called for the total price to include books, none of them account for the price of books.

That list includes some offerings that existed prior to his announcement, which we have not included in the guide of new $10,000 degrees.

For example, before 2011, students at the Brownsville Independent School District’s Early College High School were able to earn an associate’s degree while in high school and complete their bachelor’s at the University of Texas at Brownsville for a low price. Texas A&M University-Texarkana students have also been able to keep their costs low — though slightly over $10,000 — by combining high school, community college and university course work.

The offerings of these institutions are on Perry’s list, though other pre-existing affordable degrees, like a bachelor’s of applied technology program at South Texas College, are not.

The bachelor’s of science in nursing at Texas A&M International University is among those on Perry’s list, though it’s actually a finishing degree that does not take into account the price of getting an associate’s degree in nursing beforehand. It is also not included in our updated guide. Due to a lack of available information, neither are soon-to-be-announced offerings from the University of Houston-Downtown and the University of Houston-Clear Lake that are also counted among the 13.

Still, there are a number of $10,000 degree programs that likely would not have been created were it not for Perry’s call.

Some operate by developing somewhat complex pathways for students to maximize offerings in high school and at lower-priced community colleges. Others primarily use financial aid packages to lower the price of the degree for the student.

But for a student who is interested in getting one of the $10,000 degrees that have been created in response to the governor’s 2011 challenge and are recognized by his office as such, the attached guide can show the way.