The news was met with understandable enthusiasm. “Texas A&M-San Antonio answers the $10,000 question,” declared Thomas Lindsay, director of the higher education center at the Texas Public Policy Foundation, a conservative think tank that gained notoriety in the higher ed world in recent years for pushing a set of controversial reforms.

The “question” Lindsay referenced was a challenge from Gov. Rick Perry — made in his 2011 State of the State address — to Texas’ higher education institutions. He asked that they develop a bachelor’s degree that cost no more than $10,000, including books. Perry spokeswoman Lucy Nashed said the A&M and Alamo Colleges degree is “pretty much exactly what the governor was looking for.”

But an analysis of the degree quickly reveals that it is only available to a very small number of San Antonians with a combination of academic drive and — at least for now — a passion for information technology. And they’ve got to have their mind made up at about age 15.

The $10,000 degree currently being offered is a bachelor’s of applied arts and sciences in information technology with an emphasis in computer security — an affordable credential that could open up significant employment opportunities in a market that is booming in San Antonio.

But anyone who has already graduated from high school can forget about it. A key component of keeping the cost down is earning an associate’s degree — 60 college credit hours (in this case, 42 core hours plus another 18 specific to information technology) — while still in high school.

It’s doable, but it’s not easy. “You have to really want the degree. You have to have your mind really set on what you want to do already,” said Josue Pruneda, who is about to graduate from T-STEM Early College High School in the Pharr-San Juan-Alamo Independent School District with more than 70 college credit hours and an associate’s degree in biology.

Pruneda’s classmate Raul Morales agreed, saying, “I think most of us have not had a summer since freshman year.”

Early college high schools, which offer students the opportunity to take a significant number of college courses on top of their high school work, are becoming more common in Texas, but their numbers are still small. There are currently about 50 in the state.

Travis Early College High School in the San Antonio Independent School District, one of the partners in A&M-San Antonio’s degree, will graduate its first class this spring. Of the 86 students expected to walk across the stage, 51 will have earned an associate’s degree in addition to a high school diploma.

According to the $10,000 degree plan, after earning the two-year associate’s degree, students must enroll in Alamo Colleges — a community college system — for two semesters worth of technical courses at a cost of less than $2,000. Once they’ve done that, they can finish up the remaining 36 hours of the degree at A&M-San Antonio. 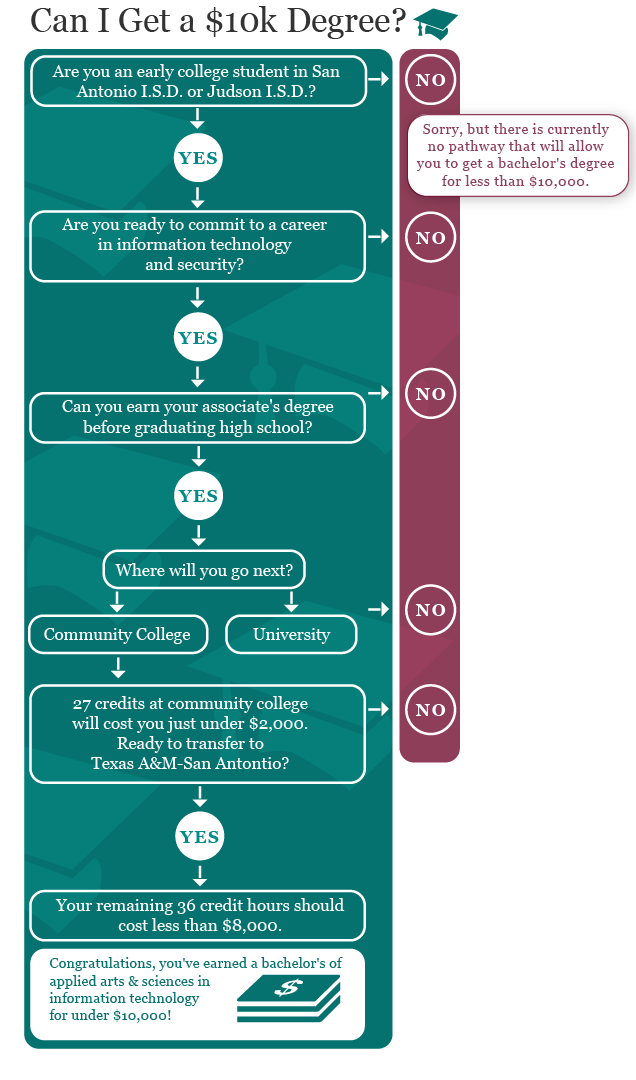 Heading to a two-year college after earning an associate’s degree is perhaps not a natural move, acknowledged Carolyn Green, director of the Center for Information Technology and Cyber Security at A&M-San Antonio. “Good communication about the degree is a key piece,” she said. “I suspect that a student would need to know that this kind of opportunity was available.”

But for a cost-conscious student, it may be worth it. Pruneda already has plans to head to Texas A&M University in College Station in the fall, but says he would not have written off making a stop at community college for a low-cost degree. “If my Texas A&M dream had not come true, then maybe that would have been an option," he said. "Saving money is always something that is in my mind.”

South Texas College, the community college where Pruneda and Morales earned their college credit, hopes to roll out a degree with Texas A&M University-Commerce for less than $10,000 by the end of the year.

Juan Mejia, vice president for academic affairs at South Texas College, said the degree — a bachelor’s of applied science in organizational leadership — will take advantage of online courses and competency-based advancement, in which students complete a course once they prove mastery of the material rather than on a set date. It will also be priced differently, with students paying a flat fee for sessions in which they can take as many courses as they want, rather than paying per credit hour.

Mejia concedes that it is not for those who want the traditional college experience, but says that it’s not meant to infringe on that option either. “Our goal is not in any way to say this is what we’re doing for everything from now on. This is just one option,” he said.  He notes that other very affordable bachelor’s degrees that just slightly exceed the $10,000 mark are already available at a small group of community colleges, including South Texas College.

When Perry called for a $10,000 degree, he encouraged institutions to go beyond traditional models. In a 2011 letter to college leaders, he wrote, “Programs may include online and blended classes; classes at no-frills campuses; credit for prior learning, dual credit and Advanced Placement; and open source textbooks."

He also wrote that the programs “should be scalable, so at least 10 percent of the degrees you produce use this approach.”

Even with multiple institutions in the Texas A&M University System saying such degrees are or soon will be available — Tarleton State University in Stephenville is also developing one — the degrees are very narrowly tailored to specific universities.

“There is not a scalable approach that will result in meaningful, affordable degree plan development," A&M System spokesman Steve Moore said in an email.

And the A&M-San Antonio prices don’t actually include books, which Perry said should be included in the total cost — though university officials say all but one of the required courses use more affordable e-books.

“This is only a first step,” said Lindsay, of the TPPF, “but it’s an indispensable first step toward dealing with issues of affordability in higher education.”

Others will also be keeping a close eye on the development of these programs. Senate Higher Education Chair Judith Zaffirini, D-Laredo, said, “I think any attempt to try to formalize a pathway to a $10,000 degree is good, as long as you don’t sacrifice excellence.”

Bottom line: A $10,000 degree may be attainable, but — at this time — only for those who are able to commit to a very specific degree plan before starting their junior year of high school. As James Hallmark, acting vice chancellor of academic affairs at the A&M System, puts it, “There is no substitute for early identification and preparation of degree plans in creating the most affordable alternatives for students."