The Railroad Commission of Texas regulates one of the most advanced industries in the world — oil and gas drilling. Yet the commission’s software systems, many of its rules and even its name are from another era.

As the 122-year-old agency confronts a drilling boom that is altering the state and national economies, an overhaul of its operations is under way. Its old mainframe computer system will be upgraded with modern digital storage, clearing the way for a more user-friendly website. Decades-old regulations are getting updated to reflect the rapid spread of hydraulic fracturing, or fracking. And the Legislature may change the commission’s name to accurately reflect what it does. (The commission’s railroad duties ended in 2005.)

The push does not go far enough for critics, who charge that the commission is too cozy with the industry it regulates and fails to adequately address environmental problems. Nonetheless, observers say there is a burst of energy, unseen in years, at the sometimes-languid commission.

The activity stems partly from new leadership. The Railroad Commission is headed by three elected commissioners, and each of the the current trio has arrived in the past three years.

The drilling boom, along with increased scrutiny from the public, the Legislature and federal regulators, has also forced the commissioners’ hand. Oil production in Texas rose by 18 percent between 2010 and 2011. That has strained the permitting and inspection capabilities of the commission, whose budget — $71.1 million this fiscal year, down from $74.7 million last year — has not kept up. 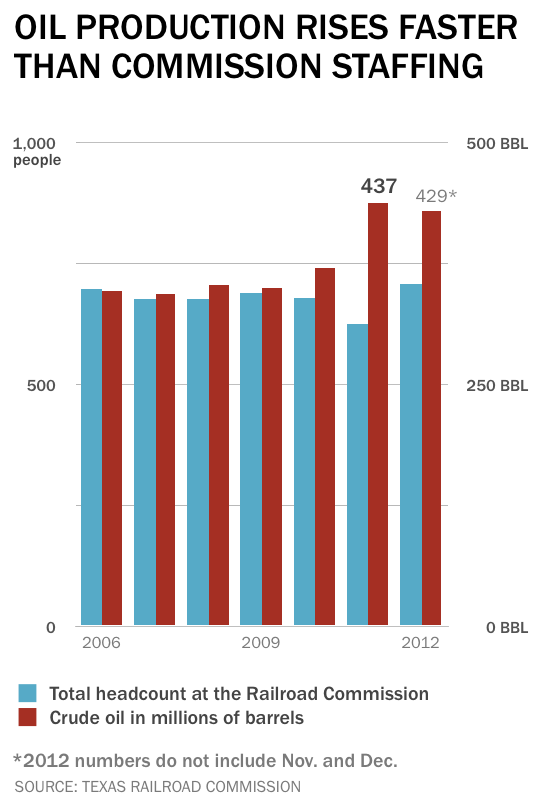 Enlarge Chart by: Jacob Villanueva
The staffing numbers at the Railroad Commission have not kept pace with soaring oil production.

The boom is driven by high oil prices and the spread of fracking, the technique of shooting water, sand and chemicals underground to retrieve oil and gas trapped in the pores of rocks. Drilling enthusiasts — including the three commissioners — see the future as nearly boundless, as more oil and gas-bearing geologic formations are tapped.

“What is happening in the oil and gas patch these days is revolutionary,” said Barry Smitherman, the commission chairman, at a forum held last month by The Texas Tribune.

The drilling surge has underscored the commission’s shortcomings and accelerated calls for change. The Legislature, as part of a standard agency review process, called “sunset,” is assessing the commission’s effectiveness and drawing up a bill to mandate changes.

Proposals from the Sunset Advisory Commission, which conducts reviews of the efficiency of state agencies, would limit some campaign contributions the commissioners can receive, to reduce conflicts of interest with the drilling industry (which donates prolifically to the campaigns). For example, the proposals would bar the commissioners from knowingly accepting contributions from groups contesting cases before the commission.

The commissioners have said that such rules would be stricter than for other state-level elected officials.

“We make decisions based upon the facts and the law,” said Smitherman, who said he is “unaffected by campaign contributions.”

The proposals also include changing the name of the commission, which was founded in 1891 to regulate railroads and added its oil and gas duties around World War I.

The federal government is now the main regulator of railroads. The idea behind a name change is to clear up public confusion.

Smitherman, the commission chairman, said that during his 2012 election campaign, at least one person offered him a mistaken compliment, saying, “I’ve ridden your railroads and your people were super-polite.” 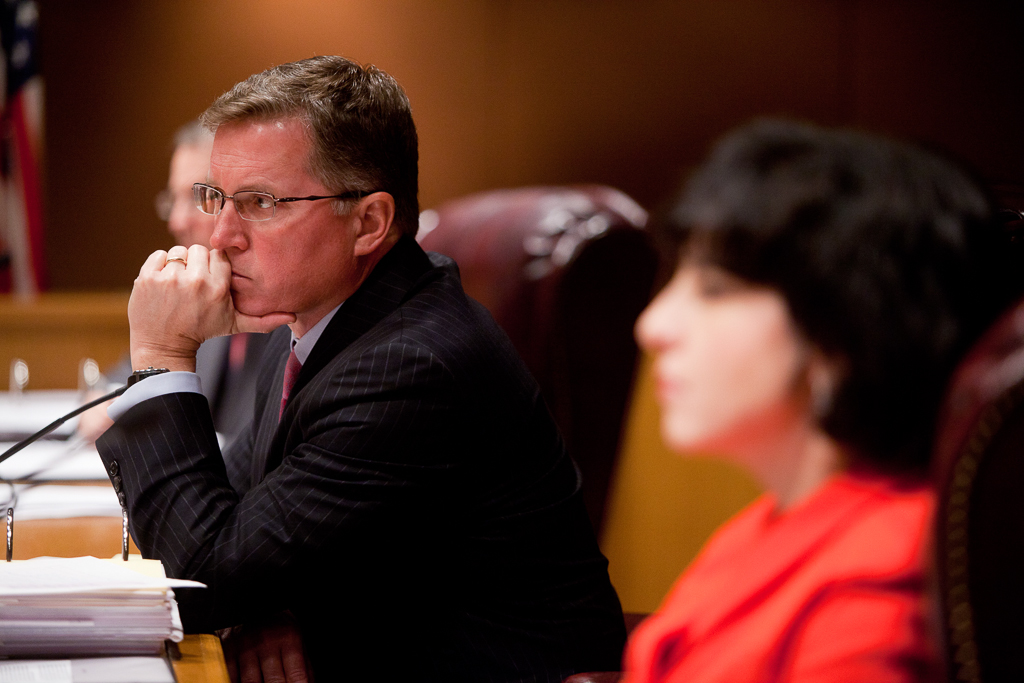 Another priority is relaunching the commission’s website. Christi Craddick, the newest commissioner, described the current site as “awful.”

The commission’s servers are so strained that users cannot access key parts of the site, such as a database of well permit applications, for several hours during the workday, and the commission struggles to add data features.

The web upgrades should make it easier to more quickly process drilling paperwork, something the industry wants. It will also allow more information to be placed online, though the commission offers few specifics on the searchable features it envisions. Commissioner David Porter says that the commission is interested in putting more enforcement data online, something Rep. Rafael Anchia, D-Dallas, has also been pushing for. “Quite honestly, we don’t have the capacity right now because we don’t have the space on the servers to do it,” Porter said.

Another area of improvement is the drilling rules, most of which were written long before the spread of fracking. The commission is working on a rule that would tighten safety requirements for oil and gas wells. It’s an important area, known as well integrity, that Texas regulators have essentially left unaltered for more than 30 years, according to Scott Anderson, an Austin-based senior policy adviser with the Environmental Defense Fund.

Another rule in the works would make it easier to recycle water from oil and gas wells — a much-discussed issue in the drought-ravaged state. The commission is also working on tightening oversight of “disposal” wells, where chemical-laced waste from fracking processes gets buried.

The rule-making activity is “a lot more than we’ve seen in past years,” said Teddy Carter, vice president of government affairs for the Texas Independent Producers and Royalty Owners Association.

Smitherman says enforcing existing rules is also a priority. The commission has faced criticism on this from the sunset commission, whose recent report says it “needs to take additional enforcement action to deter serious and repeat violations.” In the first quarter of fiscal 2013, the commission says its inspectors found about 13,500 alleged violations, including 163 major ones, but it assessed total penalties of just $177,475.

The commission has increased its penalties for repeat offenders, and Smitherman said he intended to create an enforcement division of the commission, probably during the summer.

“By making it a stand-alone division, we communicate that it’s important,” he said.

Critics say the commission does a poor job of addressing drilling problems.

Sharon Wilson, a Texas-based organizer for Earthworks, an environmental nonprofit, said that when people call her about contamination concerns on their property and she suggests reporting the problems to the Railroad Commission, “they actually get angry with me because they feel that’s not going to get them anywhere.”

The drilling industry, Wilson added, “has way too much influence in that agency.”