This week, we asked the insiders about ethics laws — a subject especially close to their own business interests. Spoiler: Their comments are very, very interesting.

Most — 61 percent — said lawmakers should be making more detailed disclosures of their personal finances. And three of every four insiders said lawyers and consultants in the legislature should disclose the names of clients who might have business before the legislature.

The insiders were split on an issue that has received more attention in and around the Capitol than from the general public — whether political consultants should be restricted from lobbying the people they help elect (and the ones they’ve opposed in campaigns). On that question 48 percent would like to see restrictions and 46 percent said they’re against limits.

As always, we’ve included a full set of verbatim comments to the survey; some selected excerpts follow. 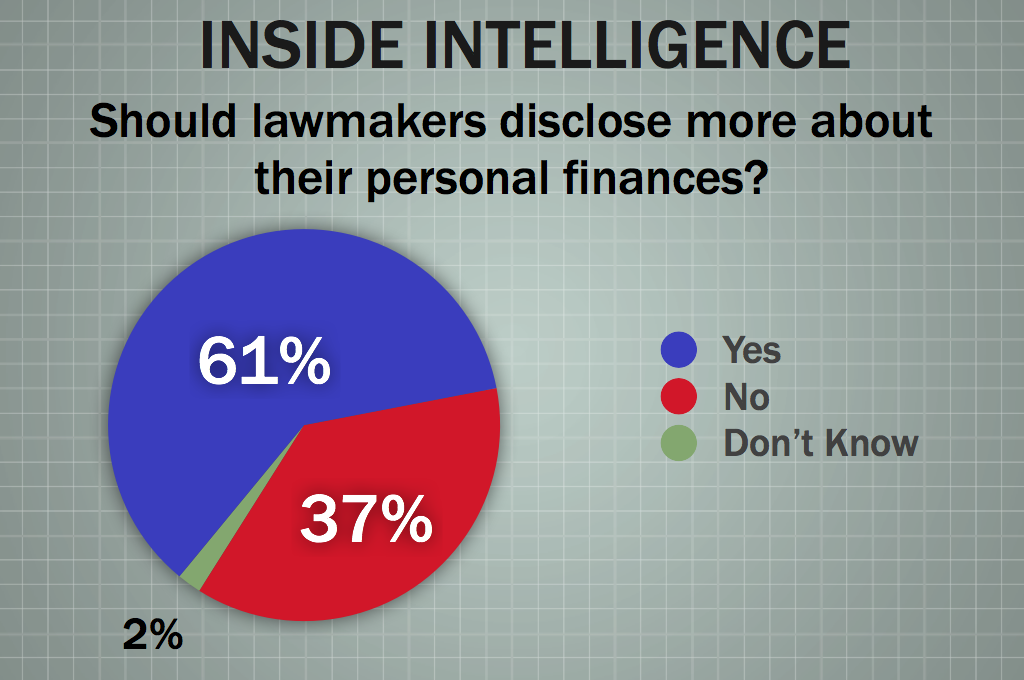 Should lawmakers be required to make more detailed disclosures of their financial interests than they do now?

• "Not much can be discerned from current reports. The current requirements create a shroud of transparency, but they don't really tell anyone very much. Additionally, those reports should be on the Ethics Commission website instead of requiring someone to physically go to the office and make a request for the information."

• "The majority of legislators do business by the book. More disclosures would add fuel to the 'gotcha-journalism' that is plaguing democracy."

• "It's a wonder Texas has been governed all these years--including decades when Texas was a one party state dominated by Democrats--without stricter disclosure rules and regs. Texans are not entitled to know every single aspect of a candidate/member's life, including specific financial details and medical health."

• "Lawmakers should be judged on their policy. Who cares about the motivation as long as what they advocate is for the good of the whole."

• "Any personal business impacted by their work in the legislature should be disclosed."

• "The public's voyeuristic inclinations have gotten out of hand. They want to know too much and then find everyone they know that much about unacceptable. Transparency and sunlight are good for the system. But the game of gotcha politics has gotten out of control."

• "I think if they are getting paid by an entity that has business before the state or business before a local jurisdiction then they ought to be required to show the public where they get their kickbacks."

• "No... The Texas Tribune is overstepping the bounds." 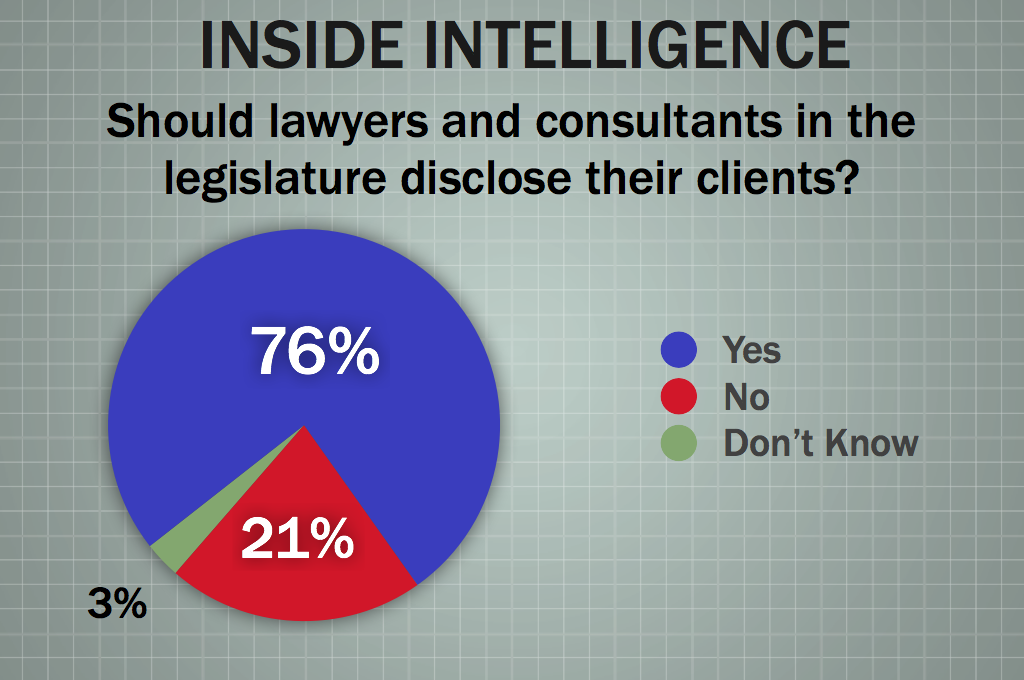 Should lawmakers occupied as consultants and lawyers be required to disclose names of clients who might have business before the Legislature?

• "Yes, there is an appearance of impropriety when lawyers and consultants are representing companies or individuals with business in front of not only the Legislature, but in front of state agencies as well. I think we all can point to certain former legislators with whom this has raised questions."

• "Absolutely. Lawyers should also have to disclose any one who refers a case to them if they are involved in a lawsuit against a state agency."

• "Absolutely yes. It would be interesting to know if legislators have become wealthy after having the privilege of changing laws to create their wealth."

• "Candidate disclosure requirements and conflict of interest laws as well as the bribery statutes should cover this area."

• "It is a tough call but if we want true citizen legislator, we have to accept the fact that these people have real jobs."

• "This is a tricky situation. Conflicts need to be disclosed but clients deserve confidentiality. Creative thinking will need to be applied to make this work for all principals." 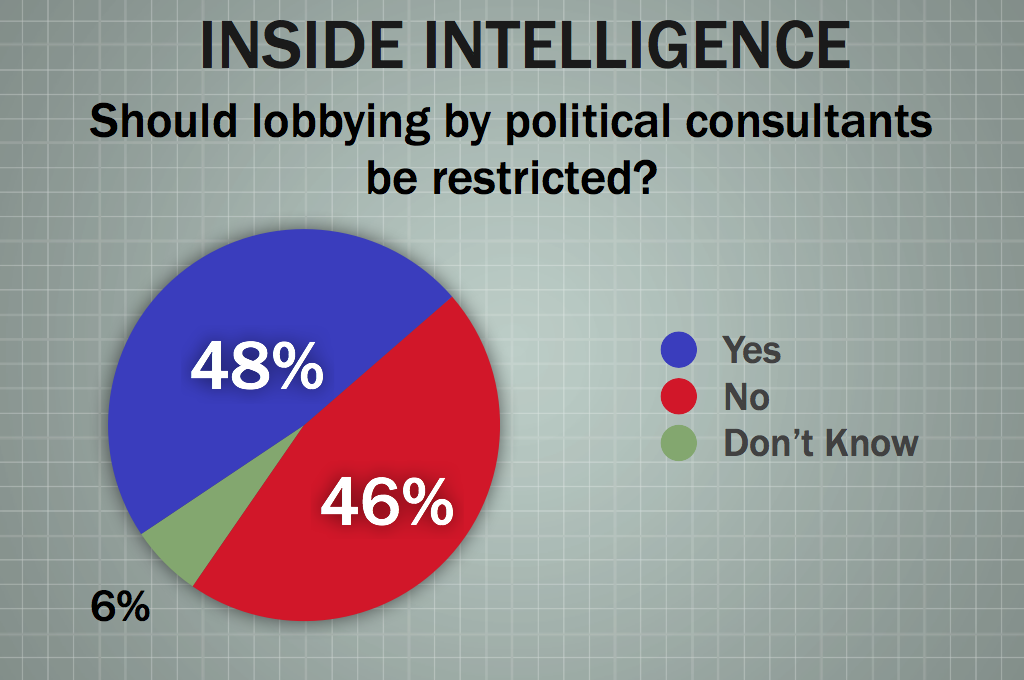 Should lobbying by political consultants be restricted in some way?

• "Perhaps actually enforcing existing lobby laws as a start? Given that the majority of the Tribune's insiders are lobbyists, do you actually think you will get answers that see past self-interest?"

• "Campaign consultants appear to have a larger level of influence over their political clients, and the appearance is very shady when it comes to representing clients before there very candidates whom they helped get elected."

• "The only people advocating for restrictions against political consultants are the old lobby guard who have become too lazy to adapt to the new lobby environment. This is an 'adapt or die' business and the old guys are dying off. Besides, political consultants who lobby are the ones that take primary political risks every season and it is becoming obvious that is the easiest path to bypass the old guard to start a lobby career."

• "Which other group of working folks would you like to restrict their ability to make a living and provide for their families?"

• "I'd like to know which campaign consultants, paid with PAC dollars from my company, are now lobbying against our interests. Seems reasonable."

• "Don't know how to do it, and there are many other equally conflicted relationships--big contributors, for one."

• "Have no problem with them lobbying, but need significant disclosure of both business and political clients."

If you could add to state ethics laws — or repeal something currently in statute — what changes would you make?

• "Require lobbyists to wear NASCAR style patches from each of their 'sponsors'."

• "Former elected officials should only be allowed to donate their campaign contributions to charity or return them to donors. To allow a former lawmaker to make political contributions as they begin their lobby practice from funds they accumulated while in office is shameful."

• "Prohibit former lawmakers from lobbying for 2 years and require any former member who registers as a lobbyist to immediately return all campaign contributions."

• "Prohibit legislators or their staff from soliciting charitable contributions during the legislative session."

• "We need more reporting and fewer restrictions. You should be able to do anything you want, but everyone should know about it. It's a balance with a purpose."

• "I would put in a faster, more frequent electronic filing of political contribution reports so that the information would be available online very quickly."

• "Add reporting with in 48 hours, and delete the rest. Restricting how people spend their money is just more restriction of freedom."

• "Make it illegal for political consultants to lobby and make former members sit out two sessions before they can lobby."

• "Require legislators to disclose any debt owed to a consultant 30 days prior to a legislative session."

• "End government payments of any kind to Legislators, include local, state and federal, and end the phony retirement rule that permits current elected officials to draw salaries and retirement at the same time."