After the theater shootings in Colorado in July, we asked the insiders about revisiting gun laws. After the schoolhouse shootings in Connecticut, we repeated the exact same questions and found that the answers have changed signficantly over the last five months.

In July, most of the insiders said lawmakers didn't need to revisit state and federal gun laws. That has flipped, with 55 percent now saying lawmakers ought to address that subject.

Most of the insiders — 64 percent — now say lawmakers should do something outside of gun law changes to help prevent such assaults. In July, only 37 percent felt that way, while 46 percent said there wasn't anything lawmakers should do.

We asked for comments, and the insiders were talkative. A complete set of the responses is attached and we've included a sampling below. 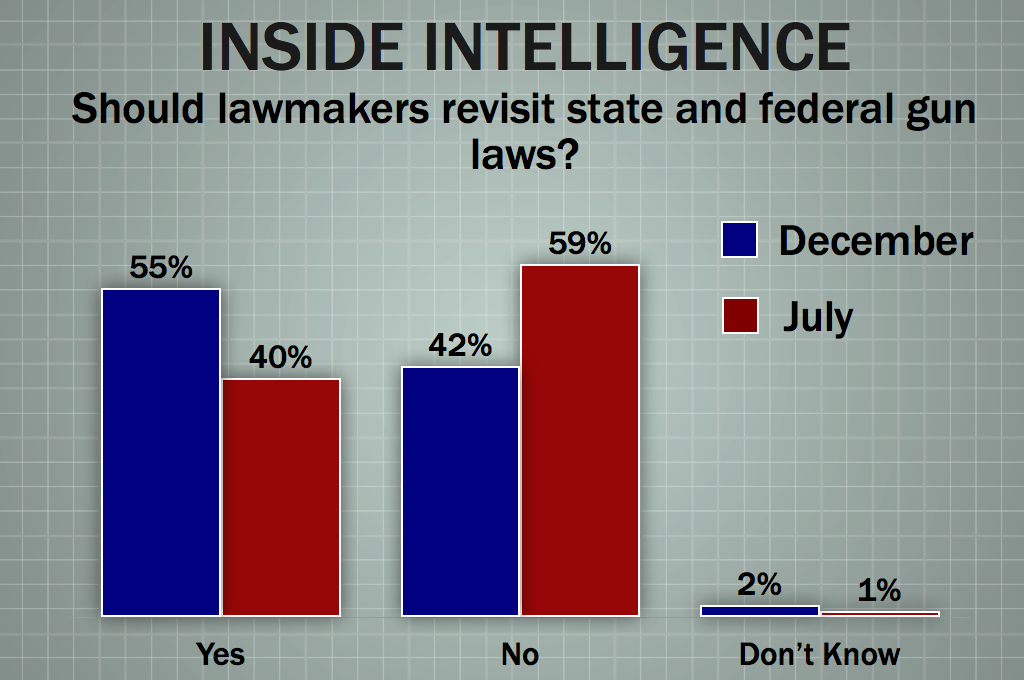 • "Assault weapon ban must be reinstated. But I don't like the odds of that happening as long as NRA remains unwilling to look at one single solitary firearm and say 'you know, THAT one probably shouldn't be in the hands of the public.”

• "They need to broaden to allow school teachers, administrators, and board members to carry concealed handguns."

• "Doing more will do nothing but limit guns to the sane. According to Nora Ephron 'Insane people are always sure that they are fine. It is only the sane people who are willing to admit that they are crazy.”

• "The gun show loophole should be closed, there should be better coordination between all levels of government on background checks, and more resources should be spent on mental health treatment."

• "Those metal detectors went up pretty fast after a gun was discharged at the state capitol. Is the legislature willing to pay for that level of security at every school and university?"

• "If I thought for a second that lawmakers could tell the difference between just making it more burdensome for anybody to get or carry a firearm, or differentiating between law-abiding folks and the potentially criminally insane, I would have answered HELL YES. But since I have no faith that they will, they probably shouldn't even try."

• "They might consider REQUIRING teachers to have CHLs and weapons to defend innocent children."

• "The shame of the matter is, every time one of these events takes place, the public and national media go bonkers about how people shouldn't have guns. I agree people like this crazy nut should not, but if only one person in the crowd were armed and properly trained, this could have been avoided, at least to the extent that it occurred."

• "Heresy in Texas, but the assault gun ban should be reinstated and high capacity magazines should be banned from use by civilians. Enhanced penalties for possession, sale, or theft of combat styled guns. Close the gun show loophole. Federal law please -- too important to leave to our state."

• "Any changes would be in the wrong direction." 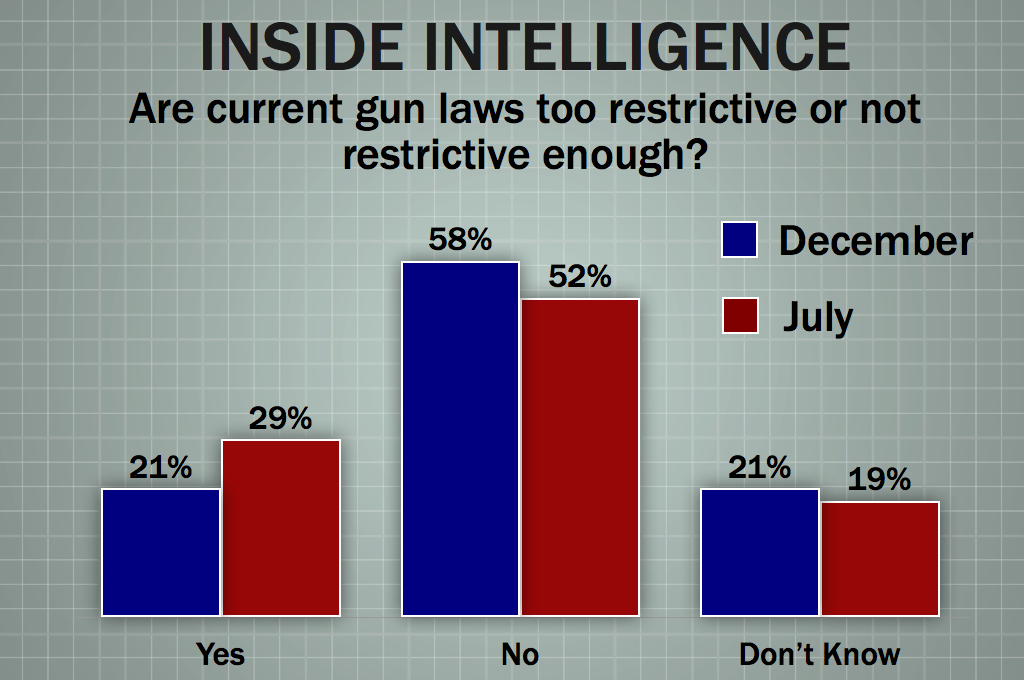 • "They are about where they should be."

• "I personally have never had a problem buying a gun nor did I have a problem getting my CHL so I'm not sure if the current state's gun laws are too restrictive. BUT, in my old neighborhood it was pretty easy to get a gun, even one with the serial numbers sanded-off. No background checks or curious questions about buying it; it was simply a business transaction between a buyer and a seller that could have been for protection or for nefarious reasons."

• "Lives may have been saved at Columbine, Virginia Tech and Sandy Hook if more adults had been allowed to carry handguns on those campuses."

• "We need to allow the feds access to the medical records of anyone wanting to purchase a gun. As much as I dislike proposing this notion, the issue that we should be trying to address is mental illness."

• "The real problem is (the lack of) 'bullet laws.' why can someone in American buy enough bullets to stockpile an amount sufficient to kill over 700 people. That’s absurd."

• "Curious that you didn't offer the option 'Current laws adequate'. I think we are probably at a pretty good place on our current gun laws. We have certain laws in place, but they do not unnecessarily restrict the rights of law-abiding citizens. I find no compelling reason to create new onerous restrictions infringing on the rights of law abiding citizens to try (and fail) to stop the behavior of one lone lunatic."

• "I do not think that cracking down on types of guns has proven effective."

• "There needs to be a conversation about mandatory background checks, waiting periods and mental health history needs to be included in the application process." 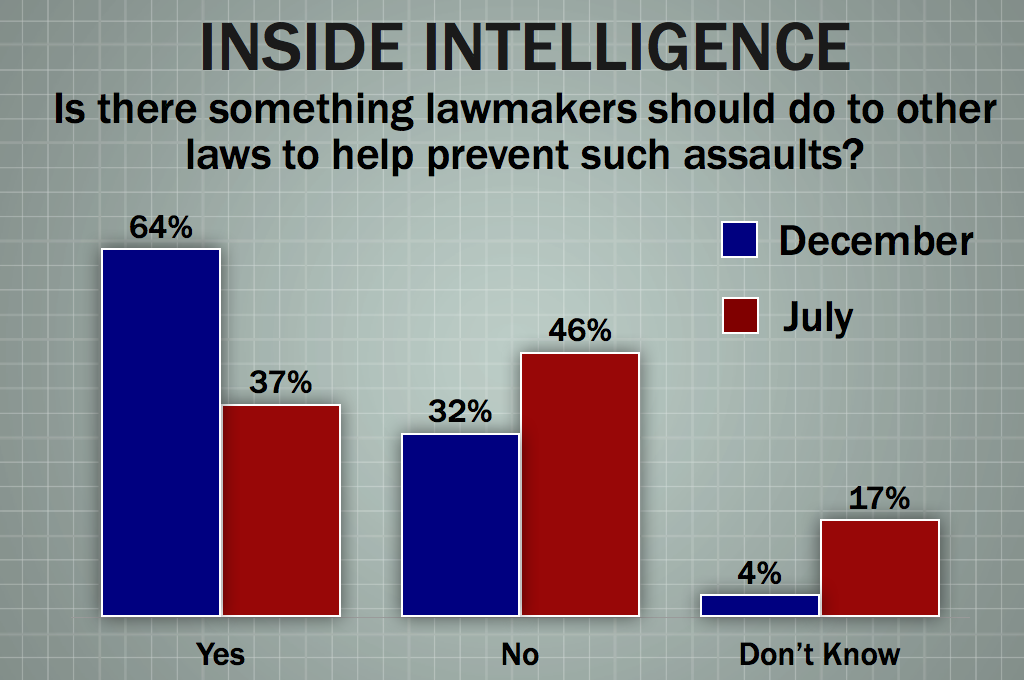 Is there something lawmakers could or should do — not involving gun laws — to help prevent assaults like this?

• "Have more people armed who can provide a safety net. If a principal or teacher would have been armed, they could have ended the incident earlier."

• "Allow teachers to be armed at the school and school functions."

• "Revise the juvenile justice laws so that parents are far more accountable for how they raise their children."

• "Instead of Perry's approach of arming teachers with guns, buck up and give our schools additional money for trained security personnel, screening devices and facilities modifications. Teachers don't really need an added responsibility. Lawmakers have a model right before them--- the Texas State Capitol Building."

• "Limit the number of bullets you can buy and require law enforcement at schools."

• "A serious commitment to more research (and funding) into mental illness, with a connect between the results of that, and the ability of those at risk to get firearms and carry them, would be nice. But, of course, the clinically insane NRA would never allow it."

• "They can do whatever they want, but they do not have the resources to put an officer on every campus or on every classroom."

• "Allow conceal carry in more locations so that no place is safe for murderers."

• "Gun laws aren't the problem. The problem is mental health. Time to get serious about helping those who need help."

• "There is no answer other than parents."

• "Require gun owners to secure their weapons in a gun safe."

• "The media needs to quit sensationalizing and enshrining mass murderers. Don't tell us their reasons and let them die or rot in jail anonymously."

• “1. Mourn the dead, grieve for the families. 2. Gather the facts. The amount of misinformation immediately after CT is staggering... 3. Have an adult conversation. Find the common ground and move forward with that. Baby steps. What's not needed is emotional, knee-jerk reaction to tragedies. Bad way to make policy.”

• "Increase access to mental health resources and keep guns away from people who should not have access to them. Let us not forget that the weapons used belonged to the mother and were purchased LEGALLY! The buyer did not perpetrate this horrific crime!"