But not on everything.

The insiders had a lot to say, though, and a full set of their verbatim comments is attached. A sampling follows: 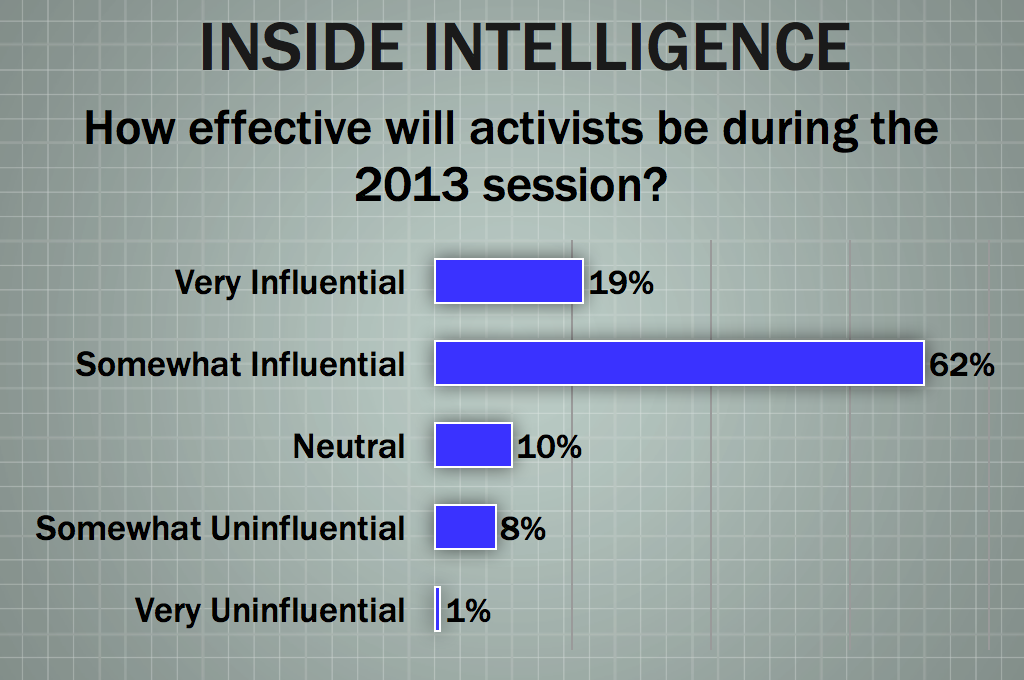 How influential do you think outside activists will be during the 2013 legislative session?

• "They will make a great deal of noise but accomplish very little."

• "Because there are so many statewide elected officials positioning themselves for the upcoming 2014 elections, I expect they will be one-upping each other constantly on their pandering to outside activists."

• "Are lobbyists counted in this group?"

• "Some members can still be swayed by these outside groups representing a small, but vocal, portion of their districts on many of the 'hot' button primary election issues."

• "Degree of influence depends on issues and activists:  Pro-Life lobby?  Some.  Environmental Activists?  Less than none."

• "I think they hit their high-water mark last time around.  I say neutral because they'll be less influential on the House side, slightly more so on the Senate side."

• "Lots squawkin' from all sides of grassroots to no real effect.  Wait, are lobbyists considered outside activists?"

• "The freshmen will help us within--so that we'll be more influential."

• "When you had lawmakers ceding the legislative process to trial lawyers and businessmen last session, this cherry got popped." 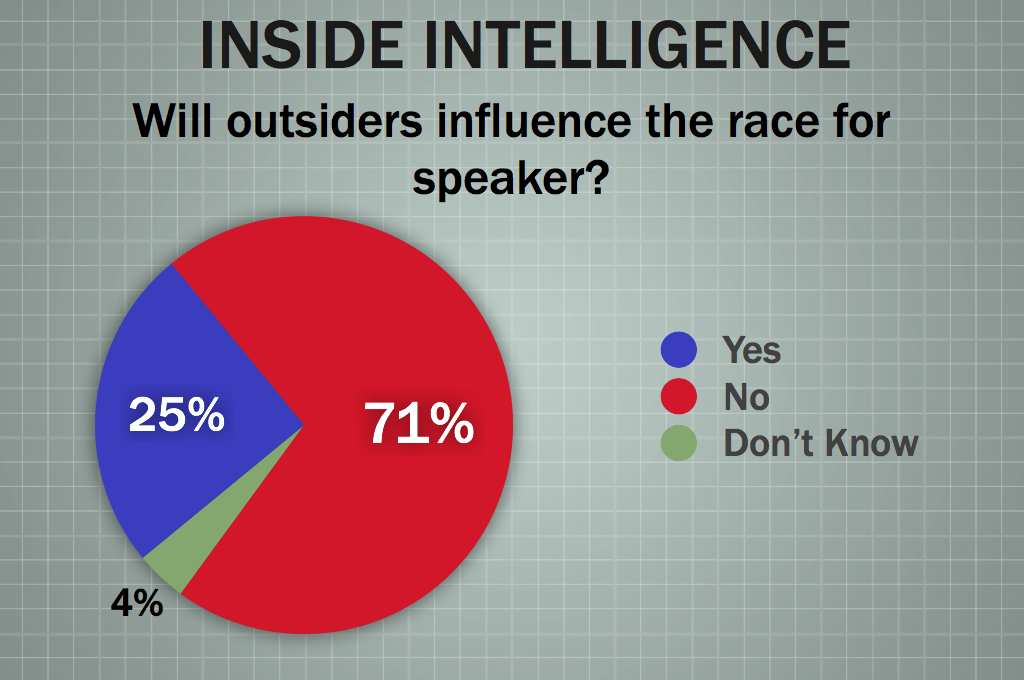 Will outside activists have any effect on the race for speaker?

• "Yes.  They will make the halls on opening day even more crowded.  Other than that, none!"

• "It would be unanimous for Straus without outside agitation; as it is, he will win comfortably"

• "They will definitely cause a lot of noise and needless chatter, but no real impact on the actual outcome."

• "No one is paying attention to the Speaker's Race but the press, and lawmakers know it."

• "He will huff and oh my will he puff, but Michael Quinn Sullivan will not blow the House down."

• "Miller, Landtroop, B Keffer, Christian, Beck and a few others are not back for a reason."

• "Anyone who has served more than one term in the House knows that the members pick their Speaker. At least so far, outsiders just end up making members mad."

• "They will help drive rhetoric but probably won't impact outcome.... Straus wins going away!  This isn't a real race.  The spotlight won't help Simpson at all."

• "The minute Hughes got out and it became Chamber of Commerce R vs. Tea Party R, the race was over."

• "They had a chance to drive the media circus for a while until yesterday.  There was never a chance to elect someone other than Joe Straus. Hughes brain: This isn't going so well for me. Maybe I should bow out and let David Simpson make a fool of himself instead." 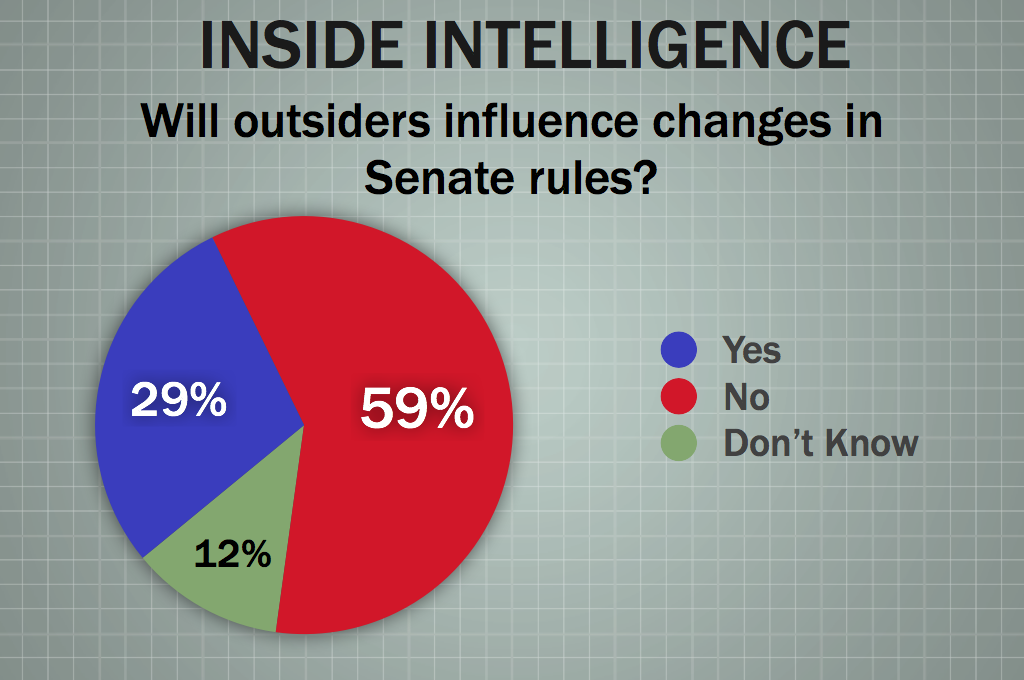 Will outside activists have any effect on efforts to change Senate rules?

• "The 2/3 rule protects rural Texas and the members who represent those good people won't lose sight of that fact."

• "They reached their high water mark when efforts were made to overturn the 2/3rds rule."

• "After his most recent electoral debacle, the Lt. Gov now sees conservative pitfalls around every corner.  This presents numerous opportunities for the Tea Party to gain ground in the Senate."

• "Given Dewhurst's craven need to re-ingratiate himself with those who've rejected him, this is the one spot where this angle might work."

• "Before the Rs get all jiggy with changing the 2/3 rule, they better look out to sea and see the demographic wave coming.  That rule worked to their benefit for decades; it will yet again."

• "Fear of activists is the only factor driving this proposed change, which almost all Senators privately oppose.   It will almost certainly fail."

• "The Lite Guv, trying to become a true conservative (haha), will be the one leading the charge to change the rules."

• "I'm not hearing as much about the rules as I have in the past."

• "Who cares? Republicans ignore the rules when they feel like it."

Are there particular issues or votes where outside activists have significant influence on lawmakers, and if so, who has the most influence?

• "Primary hot button issues...a lot of which are social or pocketbook."

• "It really varies, doesn't it? Sometimes it's just the money talking, and then other times a moral position, consumer experience or local perspective captures lawmakers' imaginations and ends up winning the day."

• "The influence of outside activists is primarily isolated to social issues."

• "Although waning, the influence of the xenophobes (there are other, less charitable appellations, one supposes) is likely to remain a factor when it comes to issues relating to those pesky brown people."

• "Social issues.  Far right has the most influence."

• "Advocates on gun rights, schools, life and tort reform will continue to have significant influence on lawmakers.  All of these are equally hot."

• "Guns. The National Rifle Association has made this the issue that dare not speak its name."