As attention turns to the legislative session that starts about a month from now, we asked the insiders about some of the big-ticket items that might be on the agenda — transportation and water and other infrastructure. First, some bad news: Most don’t think lawmakers will fund any of those programs during the regular session.

If they do fund anything like that, it won’t be with taxes, according to 95 percent of the insiders — only 5 percent said taxes would be the place to look for money. Bonds and fees got the most attention, combining for 60 percent of the respondents, and 17 percent said lawmakers might tap the Rainy Day Fund for infrastructure.

Generally speaking, most said lawmakers will get into the Rainy Day Fund in 2013 for some spending, but a large number — 37 percent — are betting lawmakers will leave that money alone.

The insiders are split on whether the state will eventually get a high-speed rail program (it’s been most recently proposed as a private-sector project by promoters in Houston.

As always, we have attached a full set of verbatim comments about this week’s questions. A sampling follows: 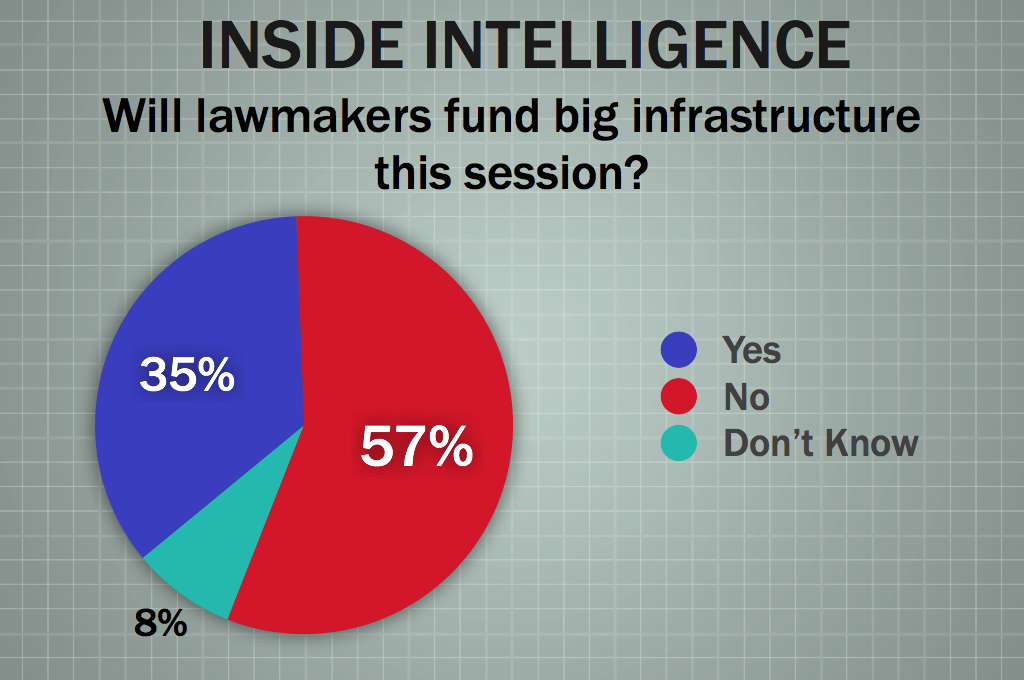 Will the state fund big-scale infrastructure needs, like water and transportation, during this year’s regular session?

• "Water will probably get another legislative study and transportation will get some extra money but no real big-scale action to solve the State's infrastructure funding problems."

• "Both water and transportation will get additional funding as we can’t keep kicking the can down the road."

• "They will definitely fund water infrastructure projects.  There is unprecedented political momentum on this topic.  The only question is whether it will come from new or existing revenue sources."

• "The key word is "needs." If that's that case, then smart money management will pay for them."

• "Yes but only on the margins.  They will not fix any problems. Too much need and not enough money."

• "Finances will still be tight and legislators will be looking to backfill funding to Medicaid, rebuild the education budget and balance the 2013-14 budget. There will be no slack for big ticket infrastructure needs even though needs are clear and growing."

• "They will finally make the investment in water and transportation."

• "The state will fund a token amount of both water and transportation.  They'll hold back on big amounts in case the state loses the whopper (school finance) lawsuit."

• "Breathing air, drinking water and driving down the road might be the only things that can get bipartisan support." 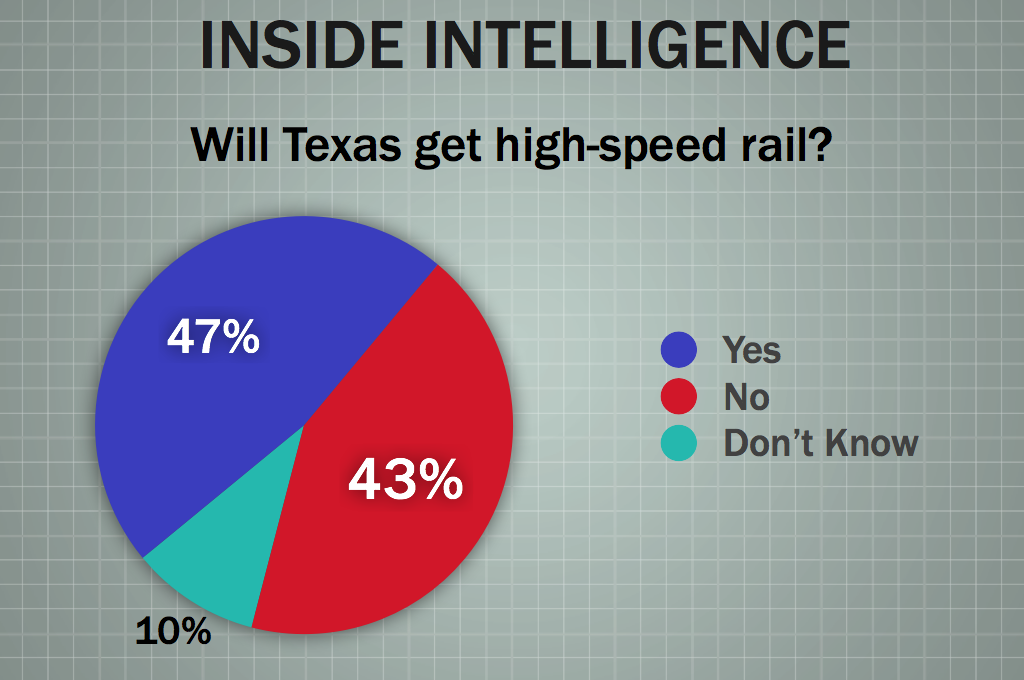 Do you think Texas will eventually have high-speed rail?

• "Will it get cattle and crops to the markets faster?"

• "It may not be in our lifetime, but the forces that be are starting to understand the business side of high-speed rail. Also, it doesn't hurt that a few influential conservative Texans are starting to push for it."

• "Even though "eventually" can cover a really long time, as long as roads and water remain unfunded or underfunded there doesn't seem to be enough money for high speed rail."

• "We might have high speed rail the day we figure out how to have a legislative session without tipping off the Southwest Airlines lobby team about it."

• "Texas is way behind, just beginning the planning process that the feds require before investing, but with open, flat, terrain between three of the nation's ten largest cites, high-speed rail is a no brainer."

• "My heart says yes but my head notes the prevalence and preeminence of oil companies in this state."

• "By the time we have high-speed rail, California will have teleporters." 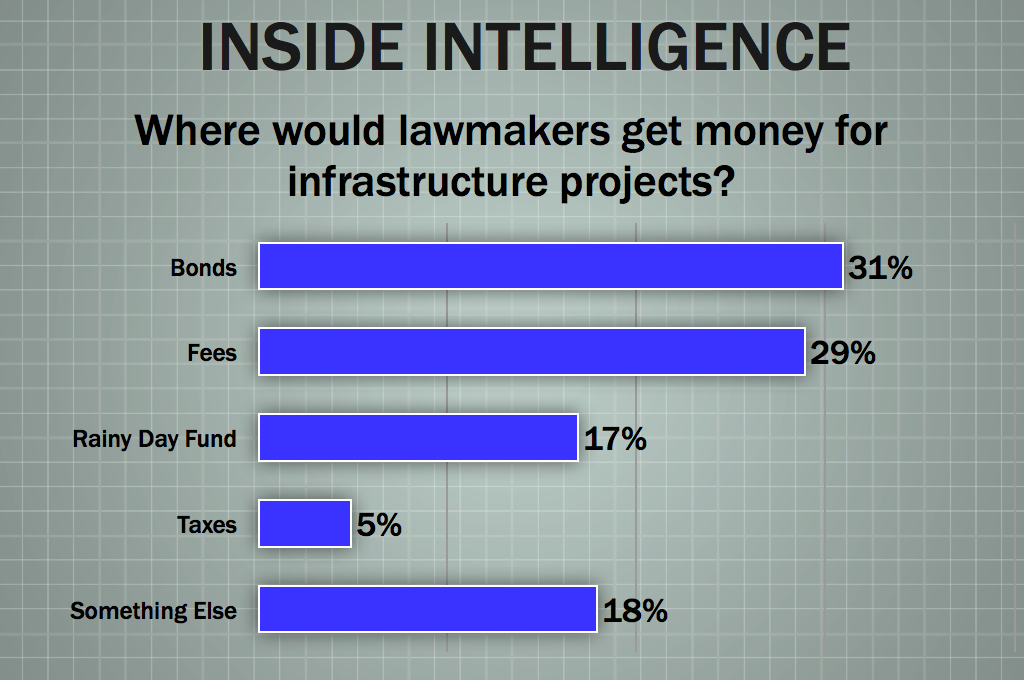 Where would lawmakers go for money to fund a water plan, big transportation or other infrastructure projects?

• "For long-lasting projects, at a time of historically low interest rates, bonds are actually the conservative approach"

• "We will not raise your taxes, but we will increase your fees."

• "The smart, and by that I mean don't tax the masses, is to go through bonds.  Although the masses will end up paying for it in the end but bonds tend to sell better then taxes."

• "Lawmakers are still more likely to use debt-financing (bonds) or rainy day funds (one-time infusions) than they are to vote for taxes or for fees that can be called taxes by future opponents."

• "There are 2 major funding sources for transportation. When the legislature finally realizes that we must live within our means, they will stop pilfering those funds and direct them to their intended purposes."

• "The state has no money. The public wants the projects. So public private partnerships are the only answer."

• "They would use the rainy day fund to set up an revolving account for funding the initial projects of the water plan and then rely on the local governments to fund the balances. It will be up to local jurisdictions to pas bonds or raise money through taxes and fees."

• "For water, it's going to take a combination of Rainy Day funds, bonds, and local/regional participation money."

• "Nothing makes these nitwits happier than borrowing money and saying they have cut spending." 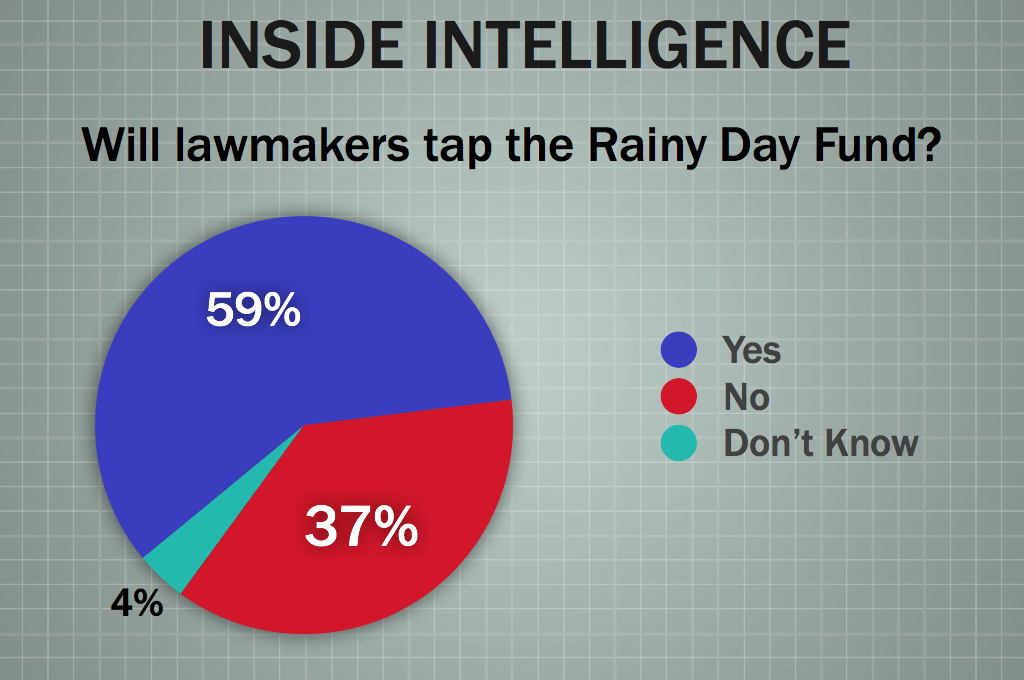 Do you think the new legislature will vote to use the Rainy Day Fund?

• "I guess it would depend on what they decide to use it for.  It was a battle to use it for public education, so I don't know what other issue is worthy of a rainy day fund vote."

• "Yes, they will use a few billion from the rainy day fund and they will justify using it on one-time, non-recurring investments such as transportation projects."

• "But only to fund prior year shortfalls"

• "Yes. The tax dollars in the fund were collected for a purpose — economic stabilization.  We presently have a serious economic instability situation being created with our failure to address critical water and transportation needs to meet current and future demands."

• "They will if leadership as in the big 3 support it."

• "But only to fund the shortfall from last Session. These guys didn't vote to spend the money.  But now they are left holding the bag.  That's a perfect and legitimate use for the Rainy Day Fund."