Enough from the regular pundits blathering about the election; we asked our insiders to blather about it. We also wanted to know what they think Gov. Rick Perry will do (spoiler: only 12 percent think he won’t run for office again and 42 percent said he’ll run for another term and also for president again in 2016). More than half said this election rendered Lt. Gov. David Dewhurst weaker than he was; almost as many said he’s in about the same shape as before. And most said Speaker Joe Straus is about the same as before, although a third said he gained clout on Tuesday.

As always, we’ve attached a full set of the verbatim answers — worth reading for the punditry, in particular — and we’ve included a sampling below.

You're the pundit: What was your take on Tuesday's election results, both for Texas and for the country?

• "Redistricting determines 9 out of 10 races and further polarizes the public policy debate."

• "The Republicans nominated a candidate they did not fully embrace and the rest of the country could not embrace him either, even though the country is not completely happy with the President."

• "The republican primary cannot be won by anyone who can win the general election. THANKS TEA!"

• "There will be continued gridlock in Washington and lots of deer in the headlights in Austin."

• "John Cornyn has egg on his face; in an attempt to appease Tea Partiers and extreme conservative members of the GOP, the party lost a chance to win back the US Senate."

• "Texas is on the cusp of beginning the turn to purple. The base democratic vote increased in races where the democratic nominee had no money, no name ID and no qualifications for the office. GOP better do something to catch the Hispanic vote. Nationally, Congress and Obama MUST and will now work together for the grand bargain and it will happen, likely in 2014. There will be major tax and entitlement reform. Immigration reform will also be accomplished for the same reasons that the National GOP MUST grow its Hispanic support...immigration reform is the vehicle to do it. They cannot afford to be seen as opposing reasonable reform. But the biggest result is that the Obama win will cement another Democratic victory in 2016 as the business cycle primarily, and government action secondarily, will inexorably lead the country to bountiful times by 2016, and continued prosperity for the Democrats."

• "The Obama ground game, use of technology is the gold standard for GOTV. Romney couldn't buy it, and lost. P.S. The Bush take on the big tent and Hispanic support is the ONLY way Republicans regain footing as a national party. As for Texas, saddle up Ricky has a new pony!"

• "Obama didn’t win it Romney lost it. Bad for the country. More division and gridlock. Solid pro-business and low tax policies assure that Texas will continue to prosper while rest of the country slides into despair and default."

• "The country is safe! Texas is screwed!"

• "Texas has to find a way back to common sense, moderate governing. If Republicans can't figure out a way to do that and keep Goober on the front porch, Democrats will do it eventually."

• "Nationally, the President did exactly what he needed to do: remind those in swing states that the economy is getting better and connect to them in a way Romney couldn't. In Texas, the tea party folks benefited from a July primary and cruised to victory. Wendy Davis win is shocking in Tarrant County where the President lost 57-41 and Straight Ticket Republicans consisted of 38% of the total vote in the county."

• "Same take for both: 'The slumbering Hispanic giant starts to awake.' And, I predict the next GOP presidential candidate's name ends in a vowel."

• "Another marker in the relentless move toward a conservative white minority" 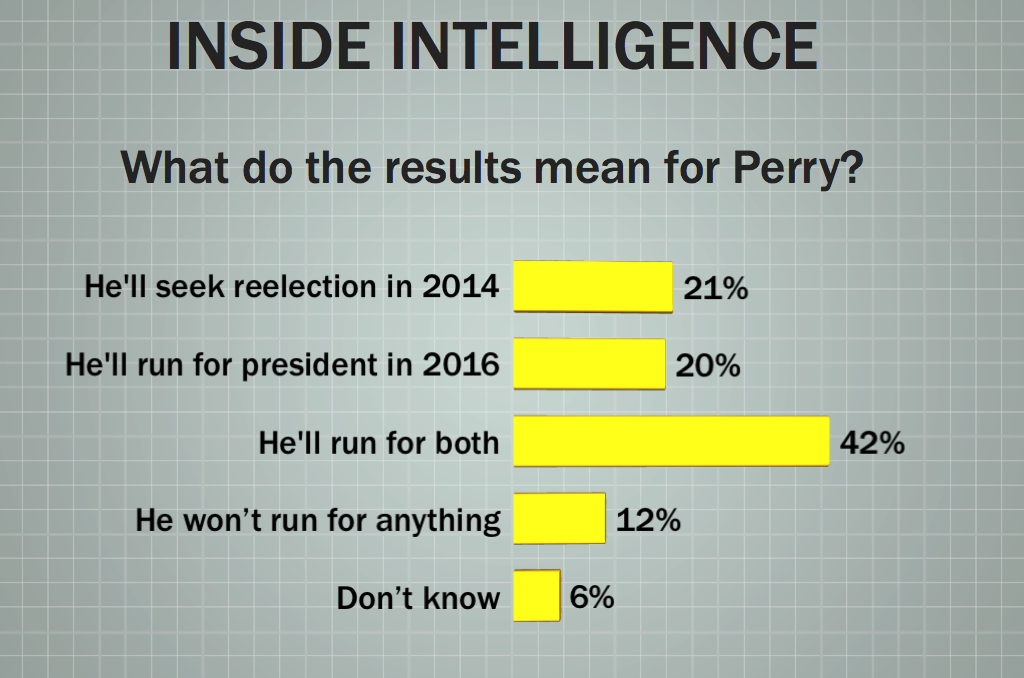 What do the results mean for Gov. Rick Perry?

• "He will continue to listen to those folks who tell him 'you were the best guy - see? That is why the republicans lost - they did not pick you'."

• "He's too damaged at this point, and those below him on the food chain are getting too restless."

• "One would have to think that this election at least (in his mind) keeps him in play for the GOP nomination in four years. My best guess would be that he would think that just to maximize his options he needs the springboard of the governorship of Texas to take advantage of the situation IF the cards fall right for a candidacy in 2016."

• "He should not run for president - the damage was too severe and the bench is far too deep (Jeb, Rubio, Ryan, Christie, Jindal)."

• "The Governor will make noises about a 2014 gubernatorial run, but this will be his last term as he elects to focus solely on a 2016 presidential run."

• "The door is now open for Perry to run for President again (and get beat again). Running for governor is logical, since the office brings prestige, an overly large security detail, and state government financing for logistics."

• "He can't help himself and we will all have to throw good money after bad again."

• "Were he to run for re-election, someone would tear him up in the primary over having 'retired' while still living on state money, housing, travel, etc. After that, a Democrat could/would beat him in November. Not worth the risk to his legacy or to the re-building of the party."

• "The question is how he runs. United that can bring Hispanics into the party? Or the 'hard ass' Republican that Lindsey Graham lamented this week?" 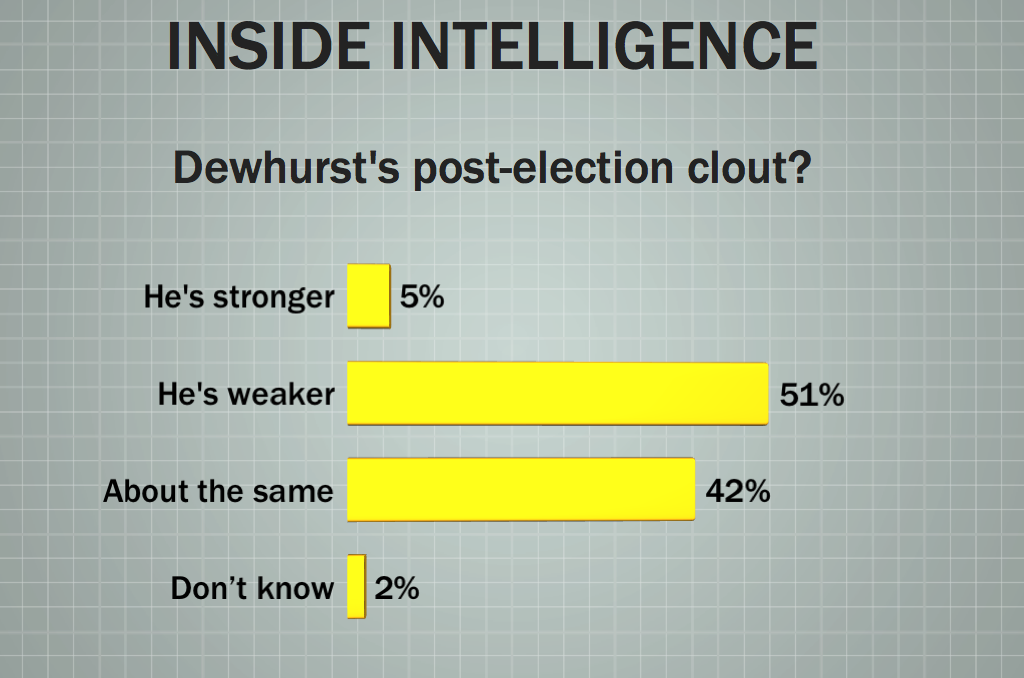 What do the 2012 election results mean for Lt. Gov. David Dewhurst's clout in the Senate?

• "He is always teetering on the brink of losing some of his power and his lousy Senate campaign won't help."

• "2/3rd Rule remains and that keeps power with the Gavel."

• "Unless the moderate Republicans come to their senses, he will be weaker"

• "Showing up to a Cruz election night party is clear resignation. Pathetic."

• "He controls which bills come to the floor and that is major clout."

• "He's weak, but not because of the elections. He just lacks vision and direction." 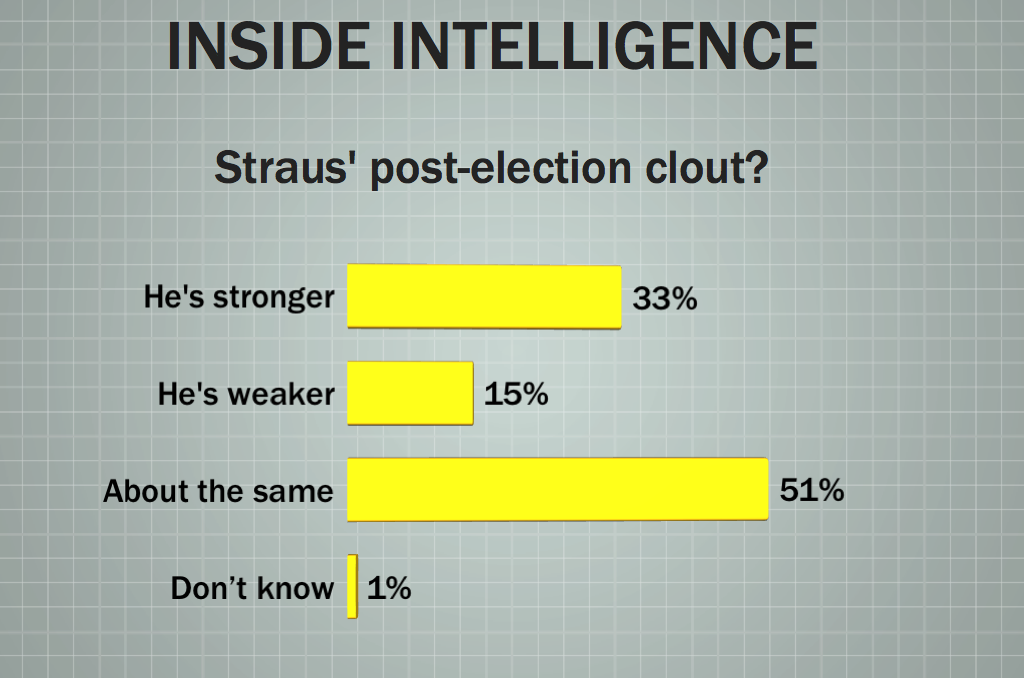 What do the election results mean for Speaker Joe Straus' clout in the House?

• "Having a super majority was not good...Straus can be stronger with 95 R's"

• "He'll return the Republican Party to its historical roots."

• "Probably needs to hold off on placing the new order of business cards that say 'Speaker.' They will be coming after him harder than ever."

• "Hard to actually get much stronger than he already is. No real loss of power. He's still firmly in control."

• "Straus could bear the brunt of conservative frustration, but the outcome will likely be the same. He should win another term."

• "I could make the case he's stronger the smaller (slightly) his caucus is. Easier to manage, although none of the truly crazy crazies lost."

• "He'll win reelection in 2013, mainly because there is not a viable (non-trial lawyer) challenger."