It’s not the most exciting election season Texas has ever seen. Most legislative races are over after the primaries and what’s left, with an exception in the Texas Senate, don’t appear to involve the balance of power in the House.

Still, Tuesday will answer some questions.

What’s the partisan mix in the House?

All eyes on Tarrant County, where Democrat Wendy Davis is fighting off a challenge from Republican Mark Shelton. A win for the Republicans would put them a vote away from a controlling majority in the Senate, where most business can’t proceed without the approval of two-thirds of the senators. That might be academic; Republicans are talking about changing the rules to give themselves control.

Will the GOP hang on to Ron Paul’s congressional seat?

It’s a Republican district, but state Rep. Randy Weber, R-Pearland, had a tough primary and entered the general election battle with former congressman Nick Lampson, D-Beaumont, with a smaller political armory than he would have liked. Lampson is running ads that don’t prove he’s a Democrat, and instead harken back to those halcyon days of yesteryear when Congress was more likeable, or as he would say, when he was in it. Tuesday will reveal voters’ reaction to that pitch.

What’s the base number for statewide Democrats?

The nurse is making the rounds, taking pulses and will report on Tuesday whether a top-of-the-ballot Democrat in Texas can get more than 44 percent of the vote. That’s the first of two numbers that will tell Democratic donors and candidates what might be possible, if anything, in 2014.

Watch the race for Railroad Commission, or one of the judicial races — Republican Sharon Keller and Democrat Keith Hampton is a decent canary — to find out whether Republican voters fade away or start splitting tickets as they move down the ballot. This is the part of the ballot, remember, where Republicans Kay Bailey Hutchison and Rick Perry busted through the Democratic barricades in 1990.

How many downballot races does Mitt Romney win?

It’s not a typo. Will the GOP's presidential candidate turn out enough people — especially people who vote straight tickets — to help candidates on the bubble in tight races for Congress or the Legislature? Maybe these won’t turn out to be close to need the wind from the top, but watch the races at the top of the season’s final Hot List. How’s that for a lead-in? 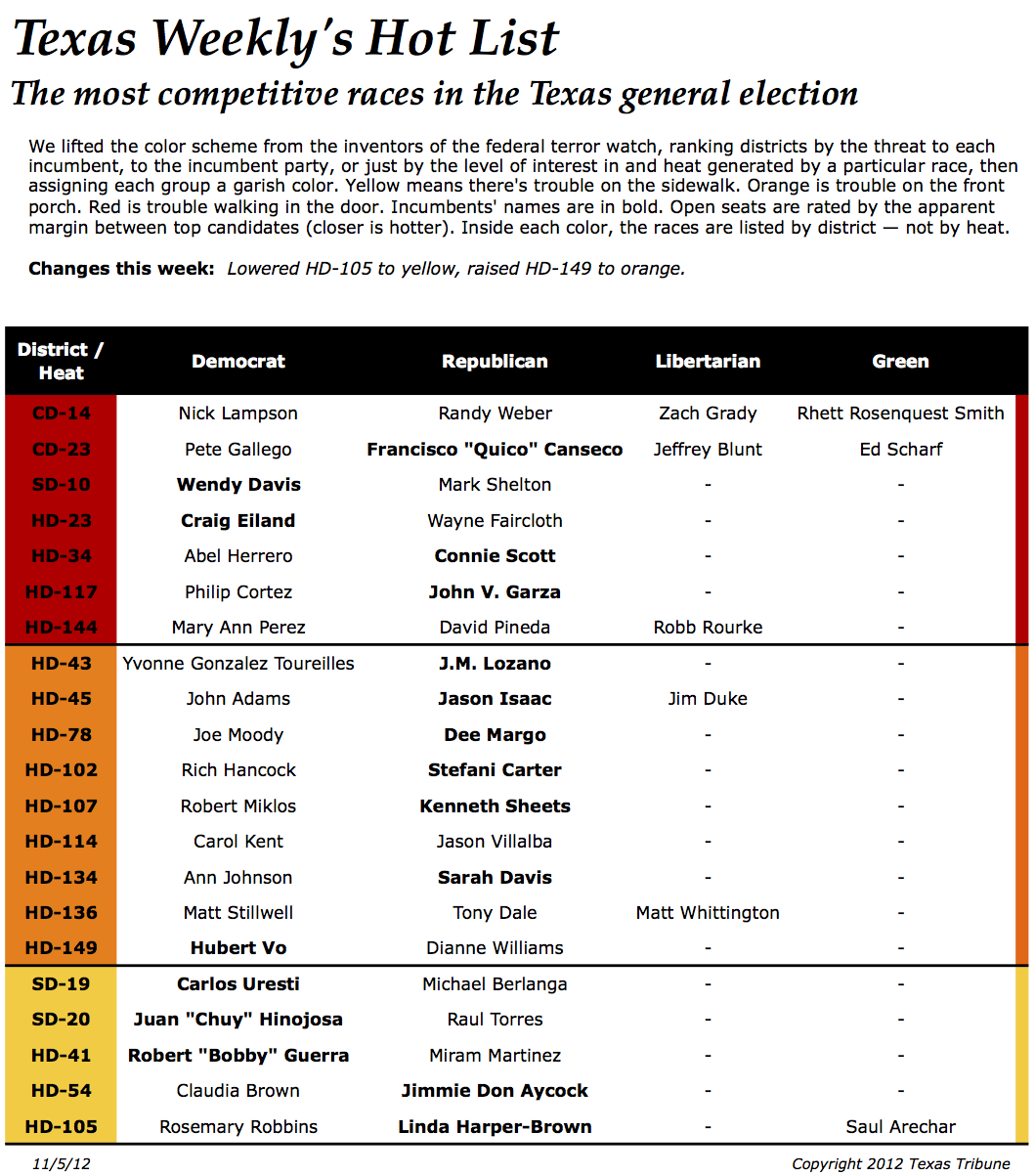