This week’s questions for the insiders again mirror questions asked in our University of Texas/Texas Tribune Poll (and we’ll do a comparison soon after the elections) and focused on how people view the state and federal governments.

Short form: The state’s grades only look good in comparison with the national government’s grades.

Most of the insiders think the state government is a pretty good model for other states to follow. Check one box for Texas.

Asked about their trust for the various branches of the federal government, the Supreme Court and the judicial branch came out ahead with 48 percent, followed by the executive branch and the president, with 29 percent, followed — way back — by Congress and the legislative branch, at 9 percent.

The full set of verbatim responses is attached as a separate document, but here’s a sampling: 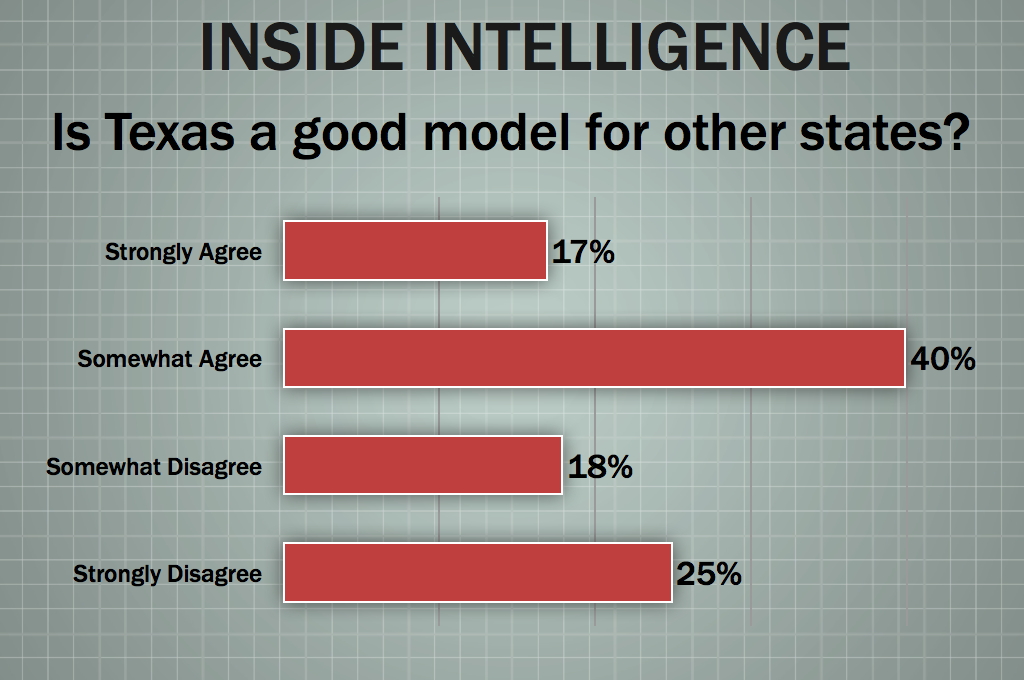 How do you feel about the following statement: Generally speaking, the way state government runs in Texas serves as a good model for other states to follow.

• "Odd year legislative sessions are a model for all states, but playing a shell game with the budget is a model for failure."

• "The Texas model of decentralized and highly dispersed power with most influence in the legislative branch is better than strong executive power systems."

• "Fiscally, sure. It's good to spend only what you bring in. Now, about those spending priorities..."

• "Having lived in the Northeast, one of the things that is most striking about Texas is that there is relatively little corruption here at the state and local level compared to say Illinois, New York, New Jersey or California. Our small, relatively non-intrusive legislature works very well for this very large state."

• "Texas state government is a prairie dog town. God help the little prairie dog with the courage and inspiration to peek his head out of his burrow."

• "Selecting agency heads and commissioners based on loyalty to the chief and ability to support his future political aspirations has not lead to great outcomes so far."

• "Anachronistic is the kindest term I can think of."

• "There is more to quality of life than cutting programs and avoiding taxes to support pay-as-you-go government," 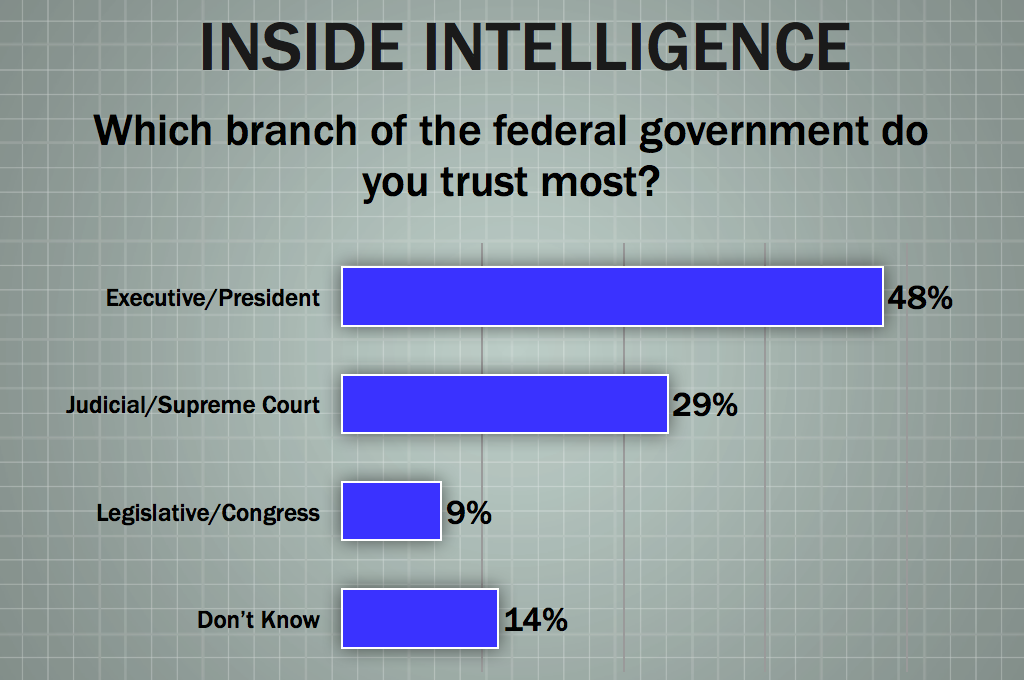 Of the three branches of federal government, which one do you trust the most?

• "Seriously? The President doesn't lead. The Supreme Court is too political. And Congress--c'mon."

• "The President, the Congress and the Courts have made monumentally bad decisions, regardless of party, over a 30 year stretch. As a consequence, faith in the federal government has eroded, with good cause."

• "If Romney wins, my trust for the Supreme Court will likely plummet with his first appointment."

• "Congress the 'most' but not much and only because we can at least try to take 'em out every two years (House)."

• "Despite the body and most of its members being wildly dysfunctional, I put more trust in the branch that is closest to the electorate."

• "Which do you trust the most? The hungry bear, the hungry lion or the hungry tiger. Tough choice."

• "Silly question, dudes: trust in individuals or not, sure. But not in branches of government, which are neither inherently good nor bad. They're tools to be wielded by the jackholes we elect." 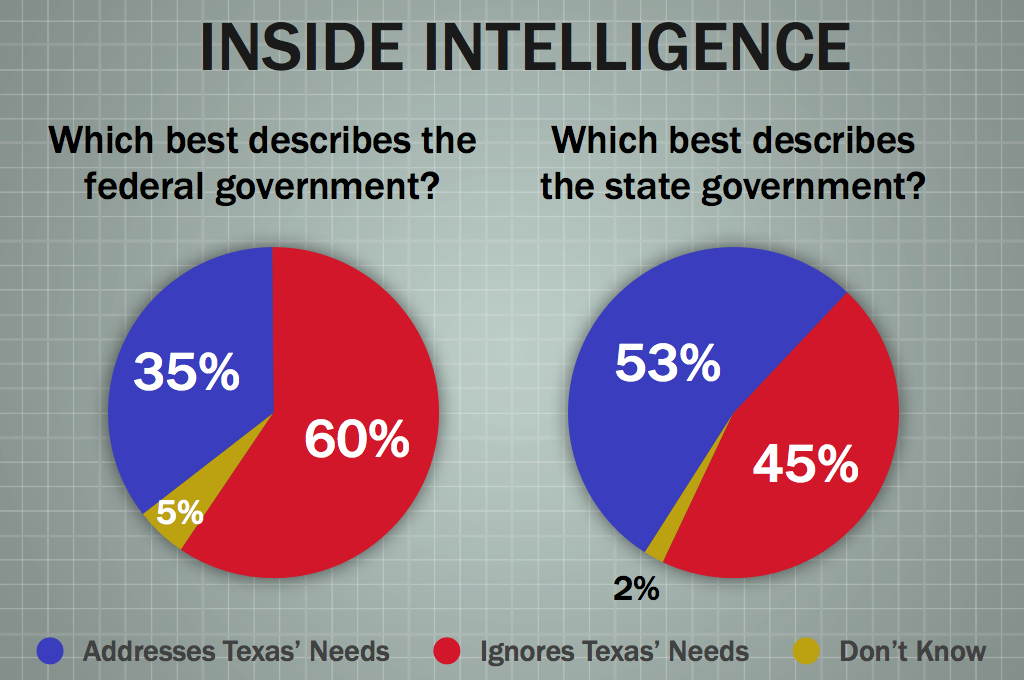 • "Unfortunately, the current federal administration is openly hostile to the needs of Texas."

• "By residents, I assume you mean 'non-contributors.'"

• "The state ignores many key needs of Texans. Many poor people get medical care, for example, but too few."

• "Sad that the Federal government has made strides to HELP more Texans than the State government which continues to pass legislation and instituted mandates to HURT more Texans - especially Women, Children and the uninsured!"

• "Government tends primarily to its own needs. 'Residents' are sort of like the students on a college campus - a pain in the @ss necessity." 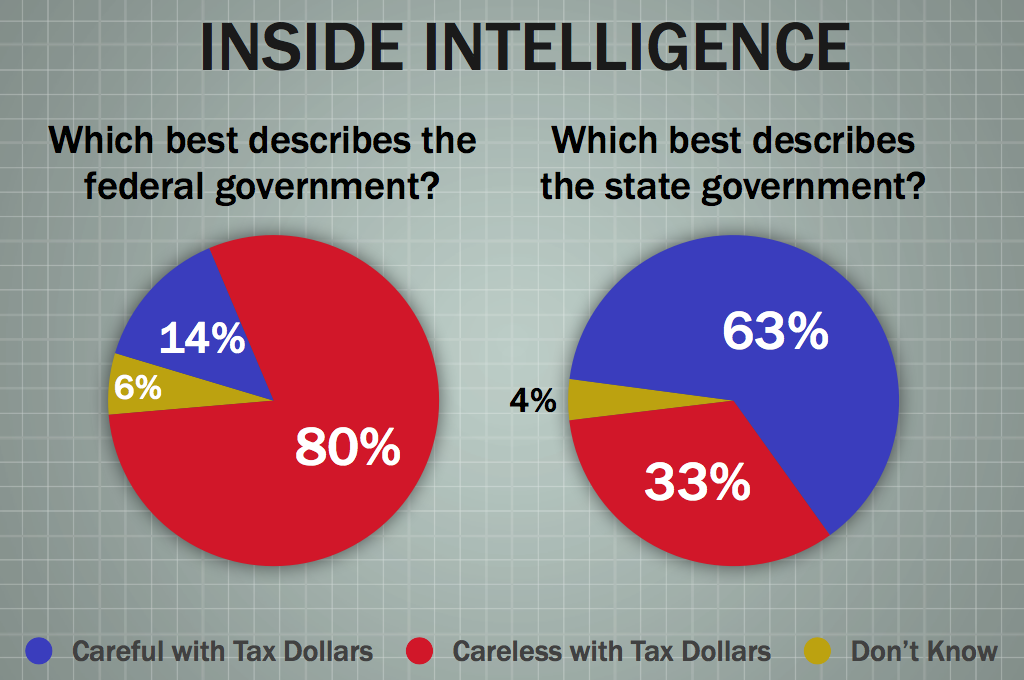 • "Neither is expressing concern about tax & spend as they grow government and pander to special interests--at taxpayer expense."

• "At least the state tends to balance the budget."

• "Balanced budget requirement is the difference"

• "Feds by overspending; state by spending on the wrong things/failing to spend on key priorities like education and healthcare."

• "Equally careless, but for different reasons. The feds spend money on wasteful defense projects and district pork, for sure. In Texas, give rich guys tax cuts while our schools, roads and medical infrastructure crumble, literally."

• "Having worked in both, I know the federal government couldn't care less about what each expenditure means to each taxpayer." 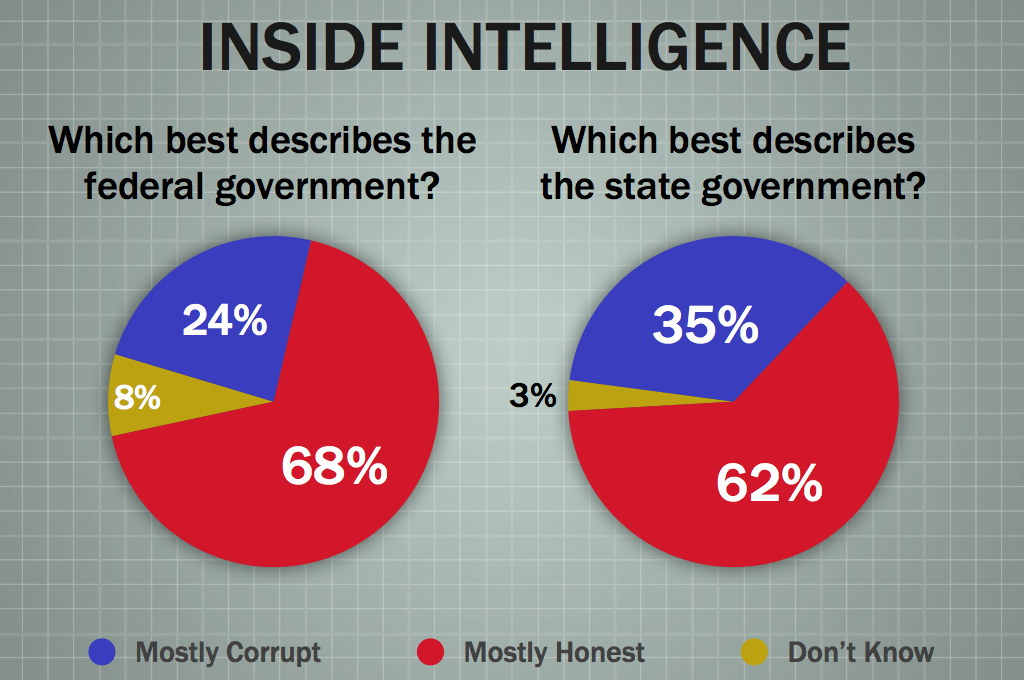 • "There is corruption and self dealing at both levels. However, most officials and staffs are honest hardworking people. Campaign finance at both levels is corrupt and bankrupt from an ethical standpoint."

• "Honest but self serving"

• "The corruption in our state government is more of the cronyism variety."

• "Loaded question. We all see their corruption because they live in fish bowl. These folks are no more corrupt than one's accountant, priest, preacher, teacher, lawyer, mechanic, any CEO or corporate leader etc. and so on. This question is old and tired. If we are going to complain about corruption in government we need to get aggressive about it in all walks of life and business. Government, like art, imitates real life or shall we say reflects."

• "Our federal and state governments--as institutions and as large sets of working people--are quite honest, indeed far beyond mostly so. A relatively small but significant number of visible and significant elected and appointed actors seem irredeemably corrupt--the poster boy being our own governor. However, we know that appearances can be deceiving so prudence dictates that we keep in mind Napoleon Bonaparte's wise words: 'Never ascribe to malice that which is adequately explained by incompetence.'"

• "At this point, Texas state government is Rick Perry. Rick Perry is the Lance Armstrong of Texas politics. He might better get before his decades of deals catch up with him." 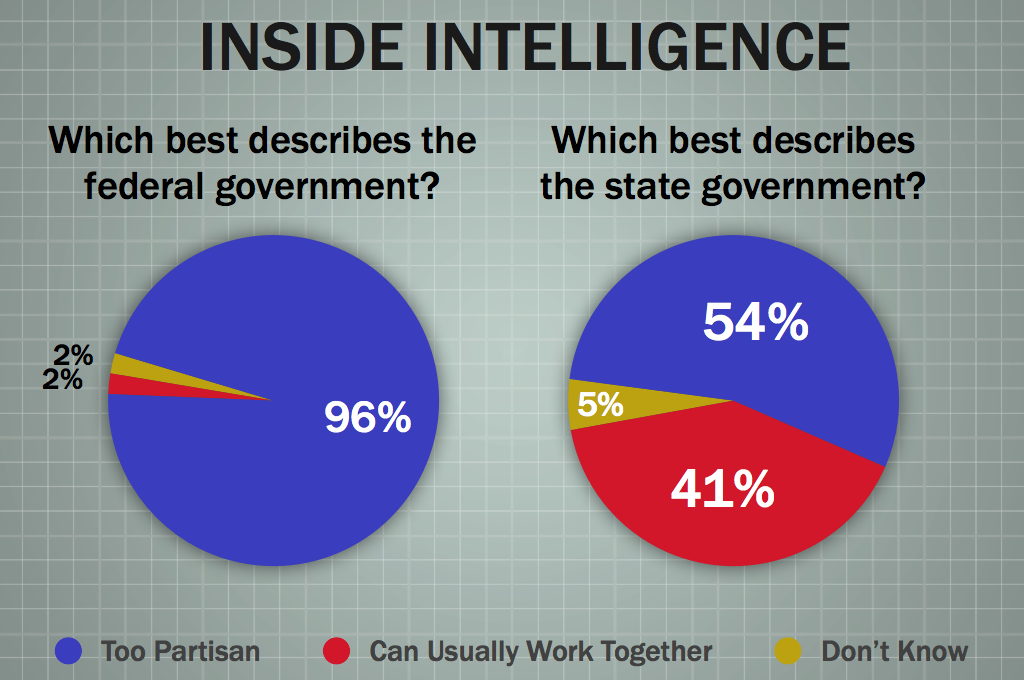 Which phrase better describes the federal and state governments: Is too divided along partisan lines, or can usually work together to address issues?

• "The question presupposes that government needs to do more, which will always cost more too. I'd rather that the parties stand for the people, NOT for more government NON-answers."

• "In DC, you have a president whose budget was unanimously rejected by both parties in both chambers. Working together is good. But you also have a divided atmosphere, like Obama, then Speaker Pelosi, and Majority Leader Reid cramming Obamacare through Congress. Divisiveness is bad."

• "We're sadly headed toward DC-style partisanship in Texas. Not about what's good for the country, but what makes my party look good, and the others look awful."

• "To say it is 'too partisan' in DC implies there are no legitimate reasons for the divisions. The friction mostly comes from real policy disagreements on important issues, e.g., the debt, entitlements, the size of government, tax policy, domestic oil drilling, pipelines, etc."

• "I'm not sure I agree with the question. It could imply that working together is a good thing. If you view government as too big or wrong-headed, maybe you don't want the parties to get along. Inaction is better than more bad action."

• "Partisan gridlock on the federal level has prevented needed reform. On the state level, the governor's 'my way or the highway' approach has stifled efficient and effective progress."