“The branch closest to the people is the one we hate the most,” said Daron Shaw, a political science professor at UT-Austin and co-director of the poll.

His fellow pollster Jim Henson, the head of the Texas Politics Project at UT-Austin, said the Supreme Court’s decision upholding the federal health care law was disconcerting to Republicans, but said there’s a reason that’s still the most trusted branch.

“There’s nowhere else for conservatives in the state to go right now. They don’t trust the executive branch because they don’t trust [President] Obama. Congress has just been infected with negative attitudes. Even with the health care case coming out of the Supreme Court in a way that disappointed conservatives, the court is still seen as the backstop for conservative policy. 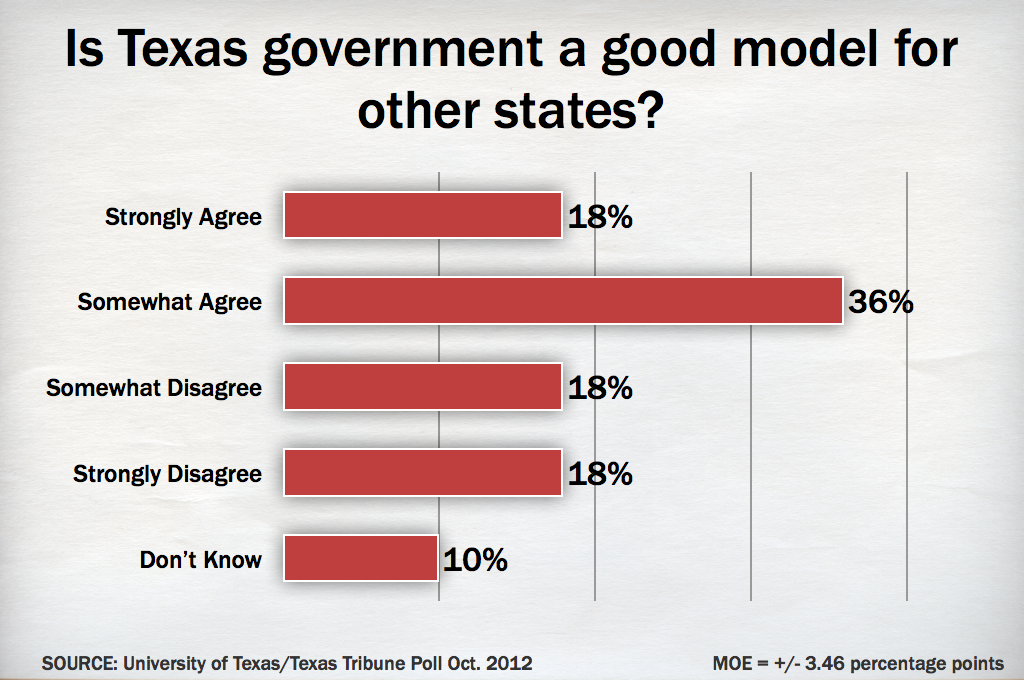 Texas government doesn’t get sparkling grades from its citizens, but it looks pretty good in comparison with the federal government.

“The suspicion of the federal government in Washington has really taken hold here and is not letting go,” Henson said. “The politicians that are campaigning on the argument that state government is a better protector of their quality of life and their interests than the national government — that message is resonating." 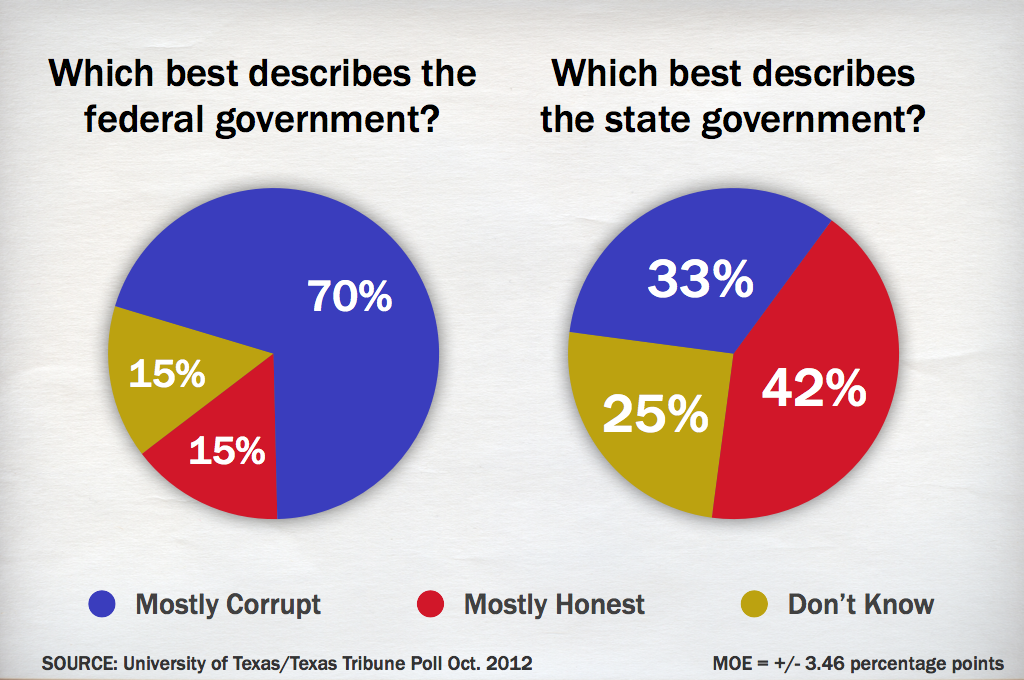 Almost three in four voters — 72 percent — agree that state government in Austin is “more efficient and less wasteful” than the national government in Washington. 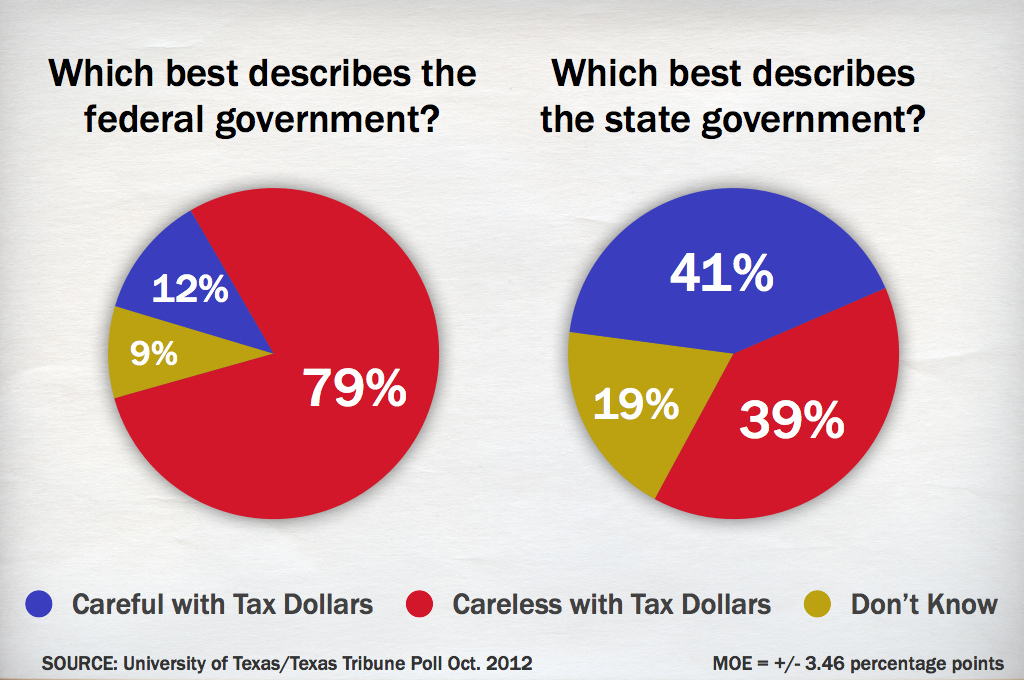 “If I were a Texas politician looking at these results, I would think we’re doing better,” Shaw said. “But I wouldn’t go overboard with the ‘they like me’ business — they’re not so hot on Texas, either. But they really don’t like D.C.”

Given the choice between opposite descriptions, a third said state government is “mostly corrupt,” while 42 percent said it is “mostly honest.” The rest said they didn’t know. The marks contrast with those given to the federal government, where 70 percent of the respondents chose “mostly corrupt.” 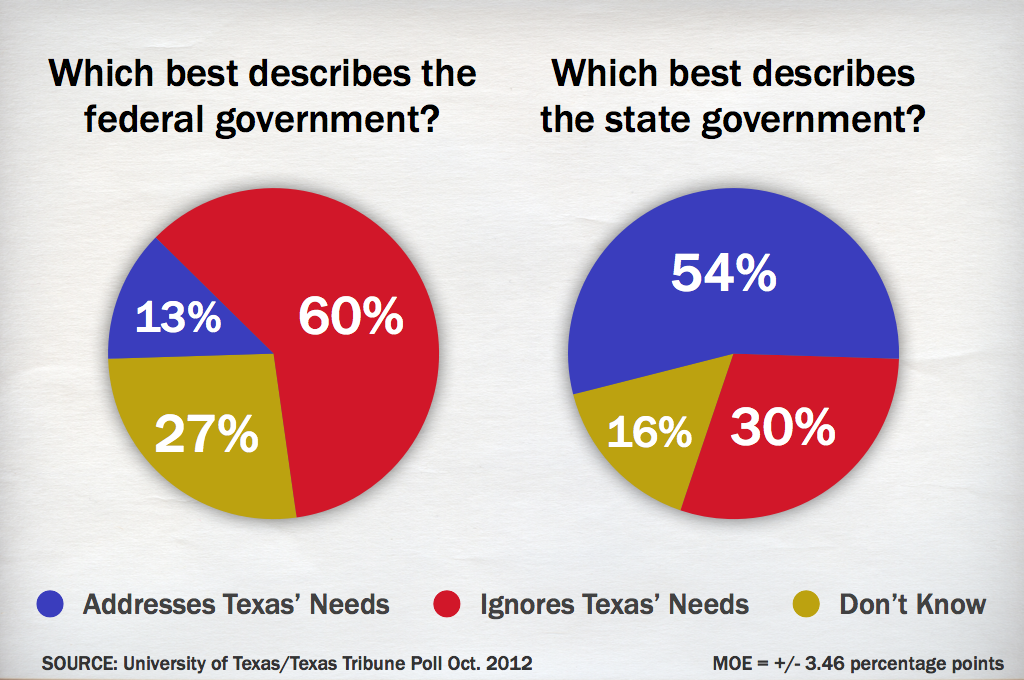 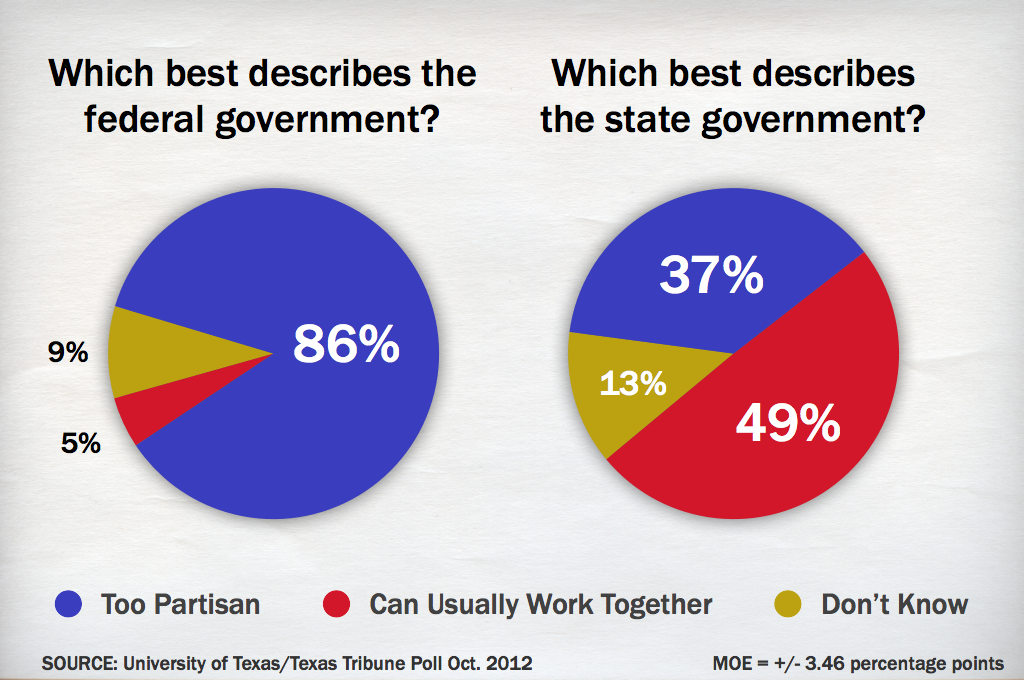 “Texas only looks good in comparison, I suppose,” Henson said. “Overall, what it tells us is that there is a lot of discontent out there with government. Elected officials are going out and finding these attitudes, and cultivating them and feeding them, and they’re growing.” 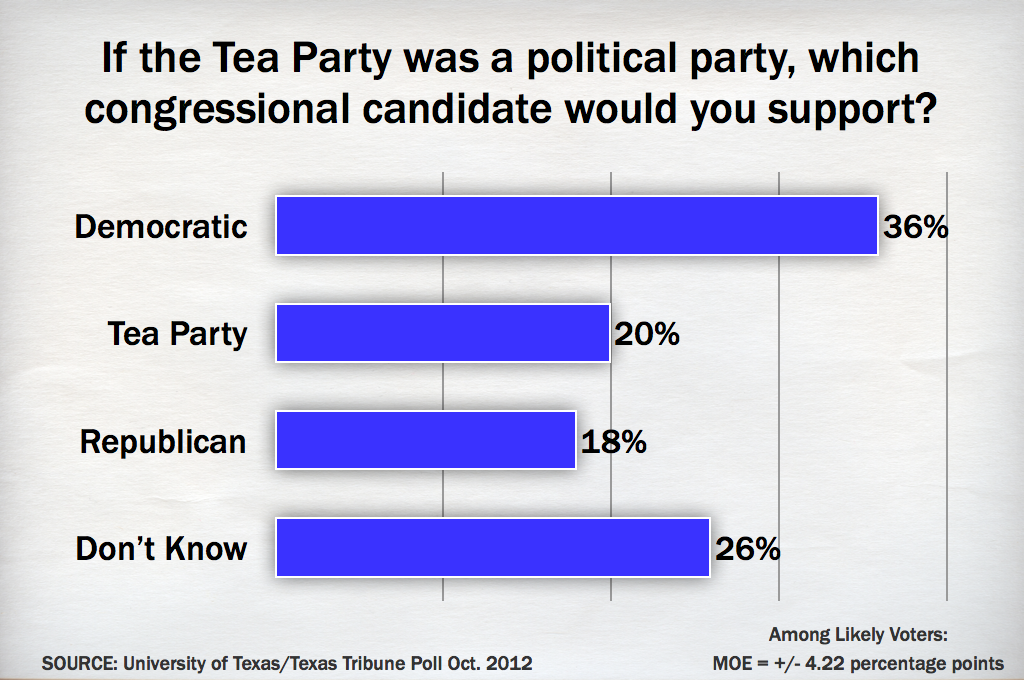 If the Tea Party were an actual political party instead of a movement, 20 percent of likely voters said they would support its congressional candidates, compared with 18 percent who’d vote Republican and 36 percent who’d vote Democratic.

About a third think the Tea Party has too much influence over the GOP, while 26 percent of likely voters said it has too little and another 26 percent said it has about the right amount of influence. 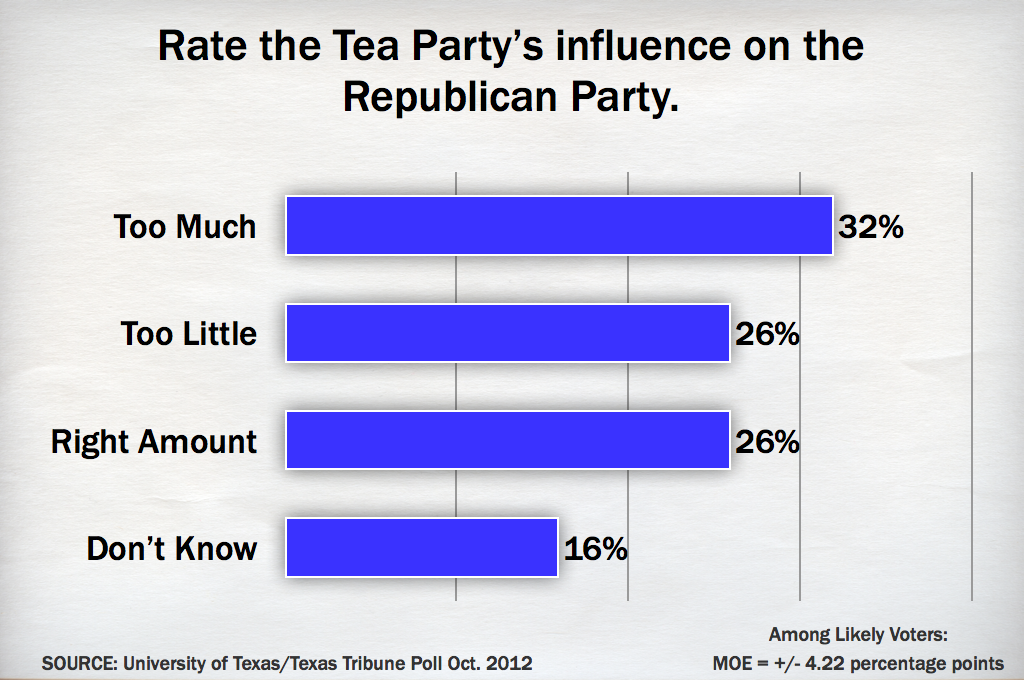 “This is how we see ourselves — it’s a very aspirational view of ourselves,” Shaw said.

Most respondents think public employees ought to pay more for their retirement pensions, but the answer varies a bit depending on who is included. The poll split respondents into two groups and asked each a different version of the question (making the margin of error on this question +/- 5.02 percentage points). When asked about the costs of pensions for state and local employees, including police, fire and emergency medical workers, 52 percent said those employees should bear more of their own pension costs. Another group of respondents was asked the same question without the first responders listed; 61 percent said those employees should pay more of the costs of their retirement pensions.

[This is the fourth of five stories on the latest University of Texas/Texas Tribune Poll. Tomorrow: how Texans feel about science and politics.]