This week, we asked some more questions that parallel those in the new University of Texas/Texas Tribune Poll, checking in to see what the insiders think about the races for president, U.S. Senate, Railroad Commission, and for their own (unnamed) state representative. Their answers? Mitt Romney, Paul Sadler, Christi Craddick, and “deserves reelection.”

The majority — 58 percent — would vote against Gov. Rick Perry in 2014 if he sought another term. And among the insiders, Agriculture Commissioner Todd Staples is the favorite in a big and speculative field for lieutenant governor in 2014, followed by Land Commissioner Jerry Patterson and current Lt. Gov. David Dewhurst.

We’ve included the verbatim remarks from the insiders in the attached document, and a sampling follows below: 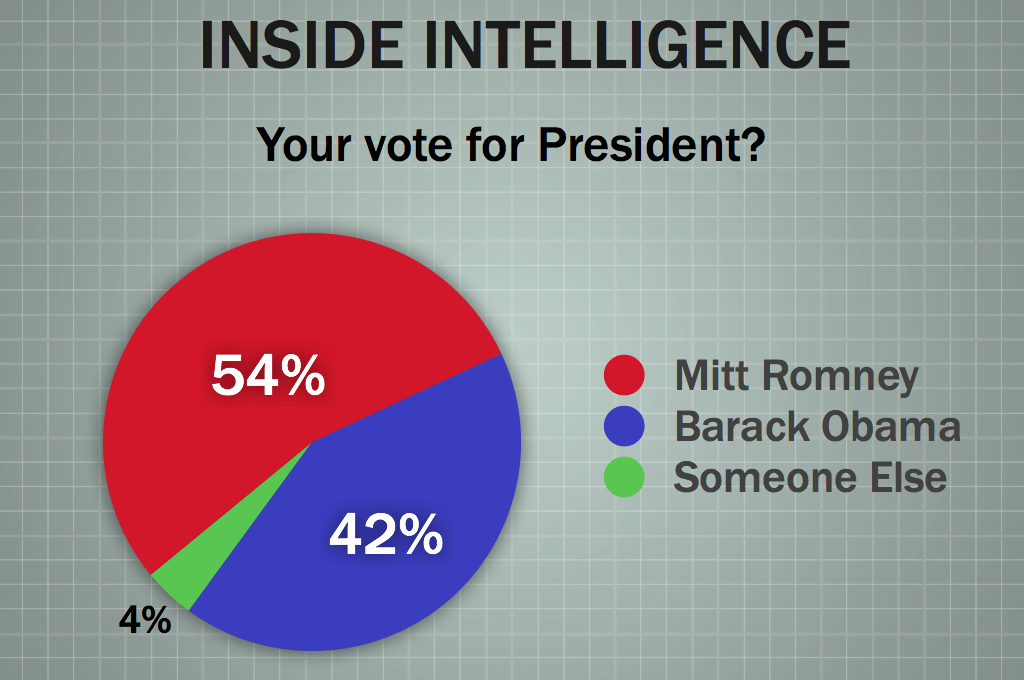 If the 2012 general election for U.S. president were held today, would you vote for the Democratic ticket of Barack Obama and Joe Biden, the Republican ticket of Mitt Romney and Paul Ryan, someone else, or haven’t you thought enough about it to have an opinion?

• "Obama hasn't been perfect but Romney is an historically weak candidate. The economy should have sunk Obama but things are looking better and Romney is just unlikeable."

• "Americans need jobs and an improved economy and less debt. Obama has failed on all 3 counts."

• "Bush broke the world. This is no weekend fixer-upper project. It takes more than four years to put it back together again. To the extent that Romney takes any position for longer than five minutes, he would return us to the failed policies of the past, which strengthen our enemies abroad and hollow out our middle class at home."

• "Who hasn't thought enough about this to have an opinion, and why are they included in a survey for insiders?"

• "Romney has shown himself to be an attractive and plausible alternative to Obama, who has failed as a leader.  Romney will win." 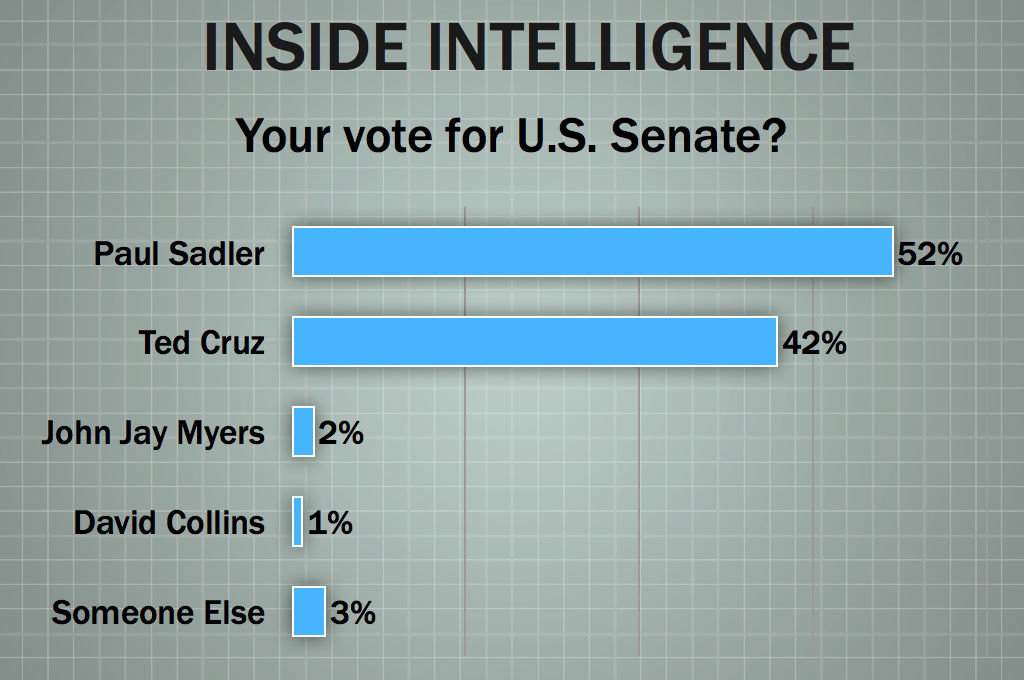 If the 2012 general election for U.S. Senator from Texas were held today, would you vote for the Republican Ted Cruz, the Democrat Paul Sadler, the Libertarian John Jay Myers, the Green Party candidate David Collins, someone else, or haven’t you thought enough about it to have an opinion?

• "Paul Sadler is running the weakest U.S. Senate campaign in Texas in 100 years."

• "The TEA Party is about to be shocked to discover that Cruz is a creature of Washington who has deep ties throughout all levels of the Republican Establishment. They have been played unfortunately."

• "The Democrats have a nominee?  That's interesting."

• "Cruz is settling into his forthcoming role as an activist, conservative Senator." 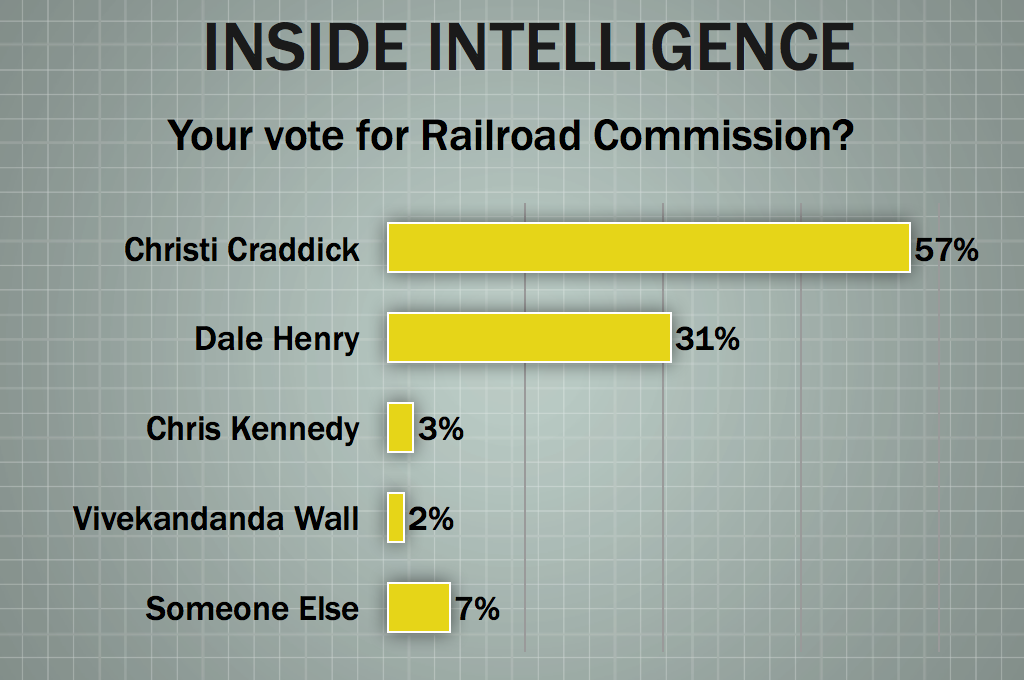 If the 2012 general election for the contested railroad commissioner seat was held today, would you vote for the Republican Christi Craddick, the Democrat Dale Henry, the Libertarian Vivekandanda Wall, the Green Party candidate Chris Kennedy, someone else, or haven’t you thought enough about it to have an opinion?

• "Anybody but Craddick!  Her father has spent his whole life taking care of his personal interest (albeit with help from his friends on the House floor) of oil and gas, now he can take care of the hearings and rules process overseeing the rules process."

• "I'll take Craddick, although Vivekandanda Wall scores some points for an awesome name."

• "We need a little diversity in our statewide officeholders." 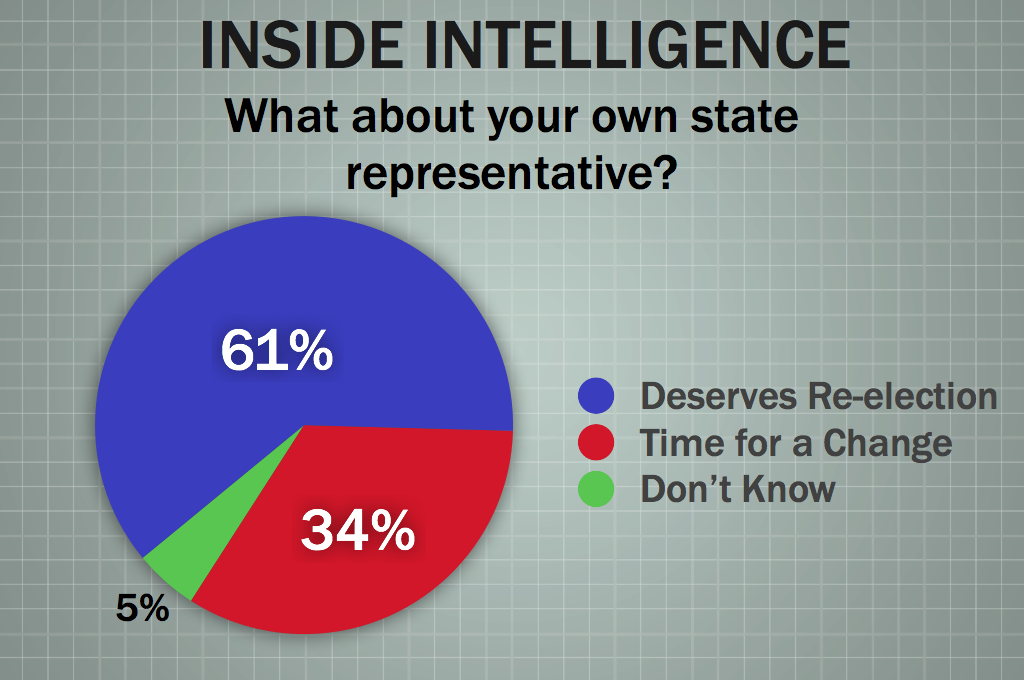 Do you think your incumbent state representative deserves reelection in 2012, or is it time to give someone else a chance?

• "Tried, but failed, to recruit a challenger in the Primary."

• "Live in an open seat district"

• "Why do we continue to re-elect those that represent us while we pound our fists about incumbents?  If we throw our guy out, we admit that we made a mistake.  This is why incumbents always get re-elected.  We never make mistakes." 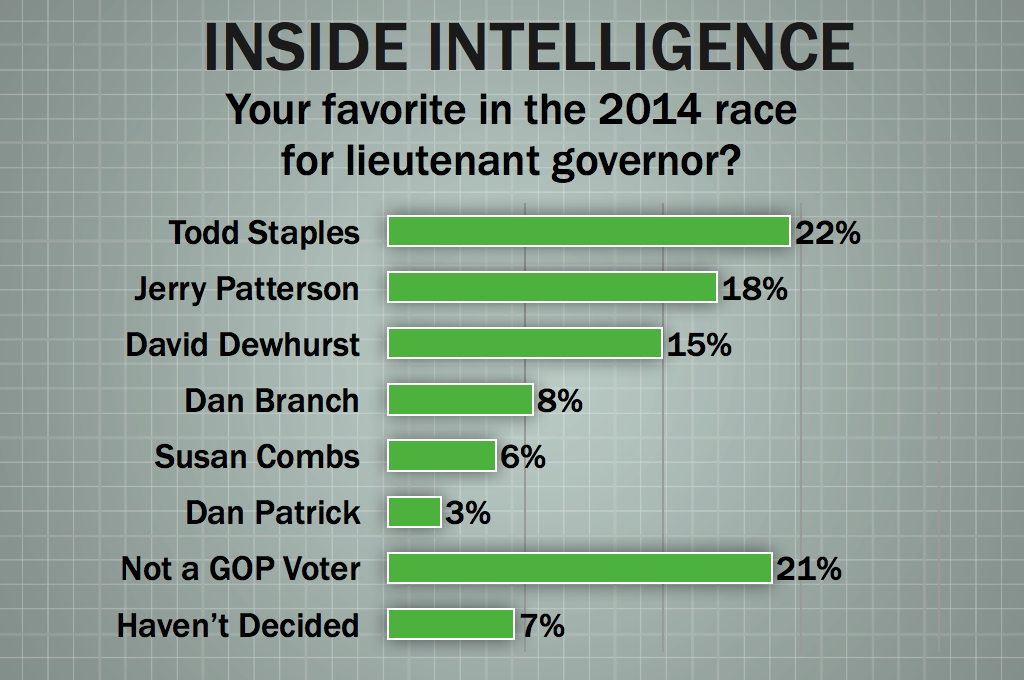 If the 2014 Republican primary election for lieutenant governor were held today, which of the following possible candidates would you vote for, or haven’t you thought about it enough to have an opinion?

• "Two years out and we know this is the field from which we will choose?"

• "Jerry Patterson is the best natural politician on the field today. He knows how to develop and drive a clear message. On matters of principle, he does not blink."

• "Your Lt Gov list left out Greg Abbott.  Some Perry people have already told me that they expect Greg to run for Lt Gov."

• "Patterson, although unpolished, has shown real leadership ability.  The incumbent is a clone of Perry."

• "He has been a fair leader, without compromising his principles.  I can't imagine a compelling reason to fire him.  But, I never thought he would have lost the Senate primary either so anything is possible." 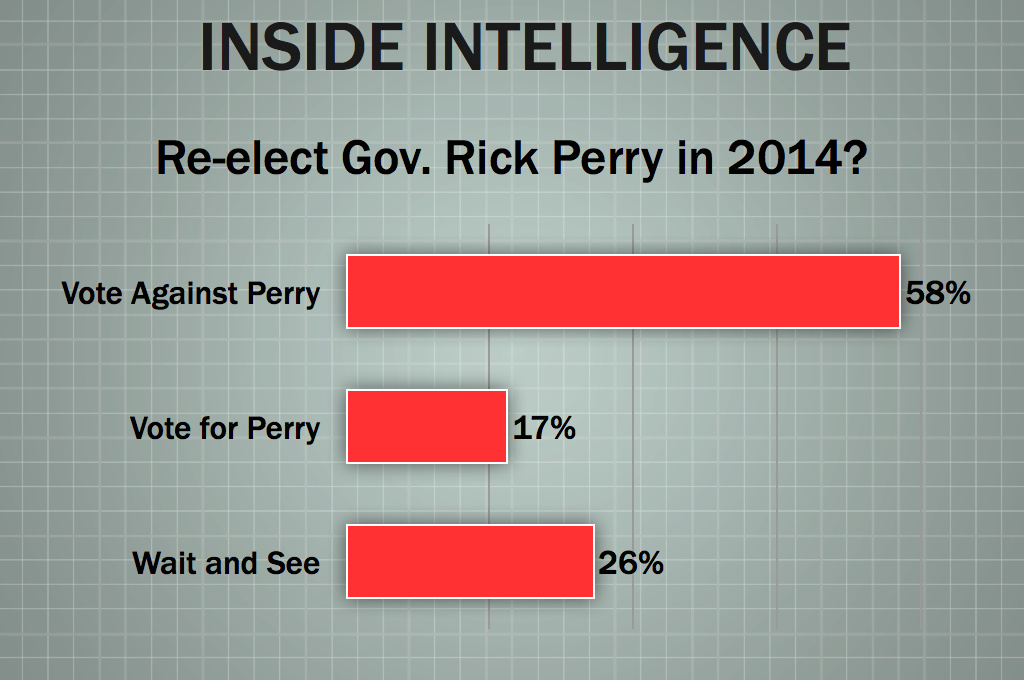 • "I have Perry fatigue, but have a hard time seeing that he's really done anything wrong enough to warrant an ouster."

• "I'd take Perry over a lot of others, but if AG Abbott ran, I'd take him in a heartbeat." 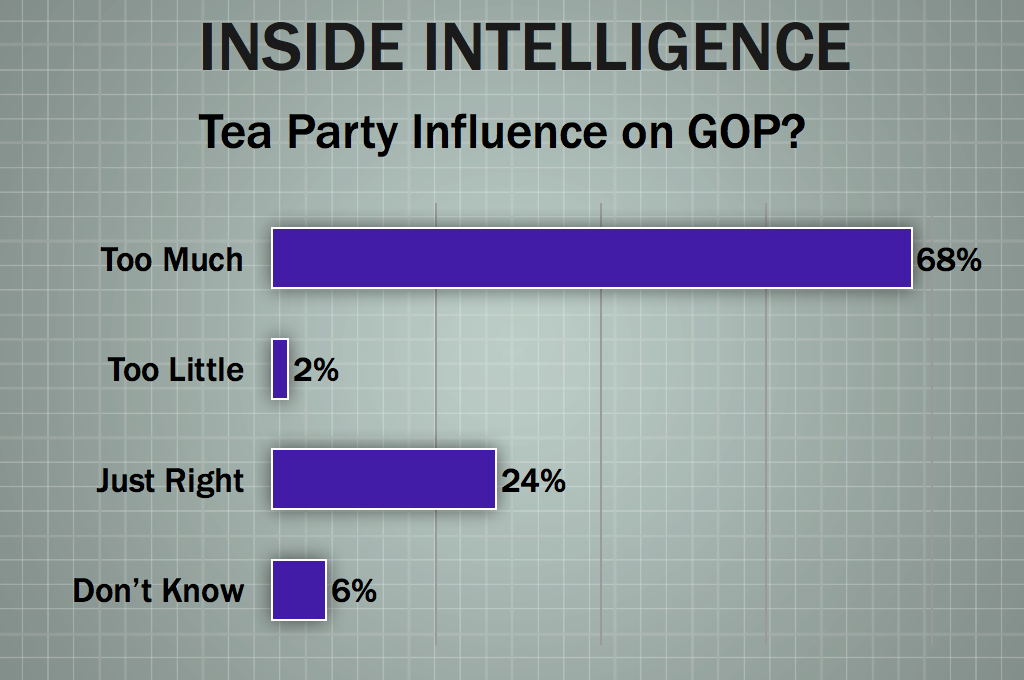 • "Too much perceived influence."

• "Not sure this is a fair question.  Influence is neutral.  It does not care who it affects and you either have it or you do not.  I think the better question is do you agree with things that are being influenced within the party.  I think you will find that there are places for disagreement and agreement within the movement."

• "To the extent that the TEA Party holds the Republican Party to constitutional principles, it is a positive force."

• "This question reminds me of the quote the rumors about my demise are greatly exaggerated.  The Tea Party will be around as long as taxpayers are angry about government's inability to wisely use their hard earned money."

• "Influence goes to those who show up and vote. The further folks jerk to the right the sooner the middle is filled by others. Democrats best friends... teavangelicals!"

• "The Tea Party has reinvigorated the GOP, and helped return the party to core principles.  The Tea Party should be all about fiscal responsibility; the danger is that social issue activists will continue to gain influence in the TP."

• "Used to be close to a straight ticket Republican until the Tea Partiers entered the picture.  If we don't find ways to adequately fund education, water infrastructure and transportation projects the economic growth we have enjoyed will quickly come to a halt."

• "All they are is LOUD. Real leadership would stand up to them. Straus sure does..."