This week marks a return to our periodic pre-election "mood" questions, wherein we ask the insiders how they feel about the national and state economies, about important issues, and about the general direction of the state and the nation.

Economic issues dominate the list of most important problems facing the country, with the economy, federal spending/national debt, and unemployment/jobs all in the top five. Education led the state list of problems chosen by the insiders, followed by water supply and state budget cuts.

Both the country and the state are on the wrong track, according to a majority of the insiders, though they're a little more pessimistic about the country than about Texas. That said, 50 percent think the U.S. economy is "somewhat better off" than it was a year ago, and 54 percent say the same about the state economy. Some — 5 percent on the national question, 13 percent on the state question — say the economy is "a lot better off." Most of the rest say things are about the same as a year ago, economically speaking.

The insiders were talkative this week, and we've included their verbatim comments in the attached document. A sampling follows: 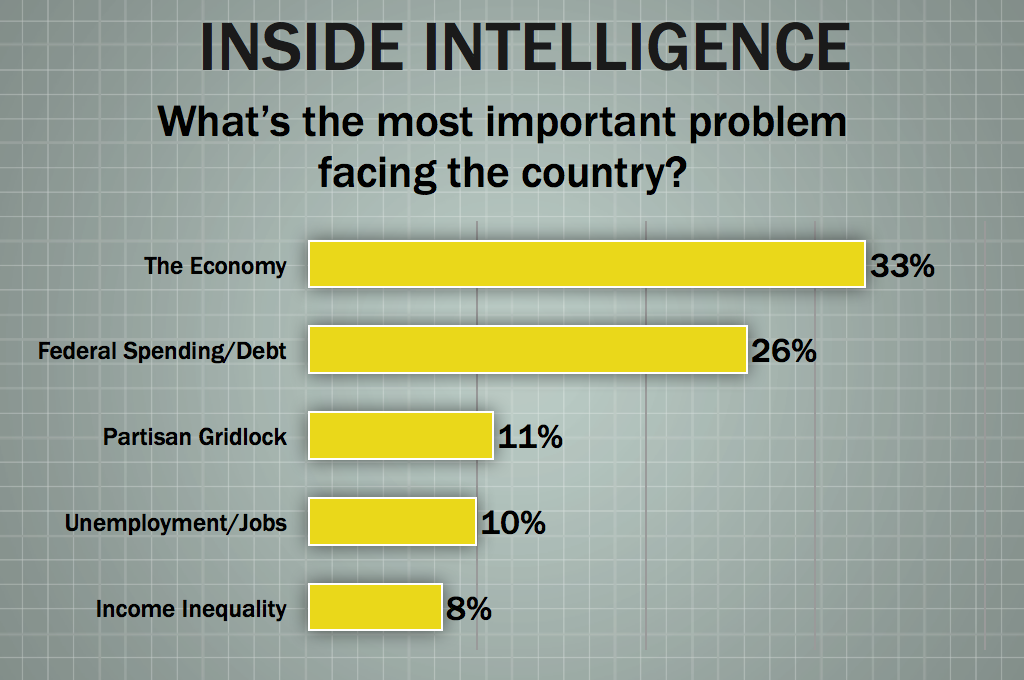 • "Without improving the way the process of making sausage works, nothing else can improve meaningfully."

• "Not just income inequality, but the combination of that and the current system of political contributions/cronyism."

• "Spending, debt and burdensome tax systems at all levels of government."

• "It starts and ends with the economy. If there are no jobs and no economic growth, addressing the other major issues we face as a country is just wishing because there will be no tax dollars to help pay for solutions."

• "Actually lack of sleep, but it wasn't on the list."

• "The seemingly irreversible growth of demographic elements permanently dependent on government is the primary threat to the nation's long-term survival."

• "It's the economy stupid. Always has been. Always will be."

• "If we get education right, our brainpower will help us solve most of the others." 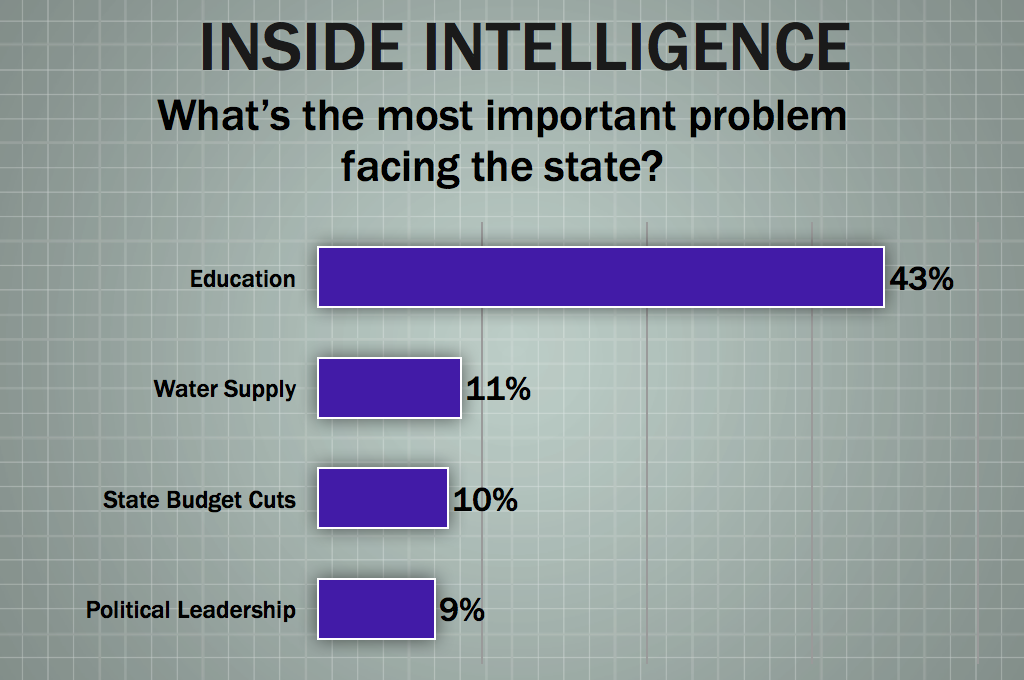 • "Ensuring a business friendly climate--educated workforce, adequate water supply, affordable and plentiful electricity, infrastructure that can serve the needs of the state, and reasonable/predictable environmental regulation."

• "I replied with "taxes," but only because I couldn't specifically reply with "school finance.""

• "A better educated adult population makes all these other issues potentially solvable."

• "Infrastructure funding- water & transportation are at the top."

• "The true answer is infrastructure...which includes transportation, water, energy, and education. These 4 issues will decide whether the Texas we know today will exist tomorrow."

• "One cannot reasonably choose just one. Education and water are the biggies that need immediate attention and action!"

• "Texas is blessed in many ways but an abundance of water is not one of them.  Growing population, a semi-arid climate, and an overly zealous property rights position on water spells big problems looming."

• "I like how you conflated political corruption with political leadership. Time saver!" 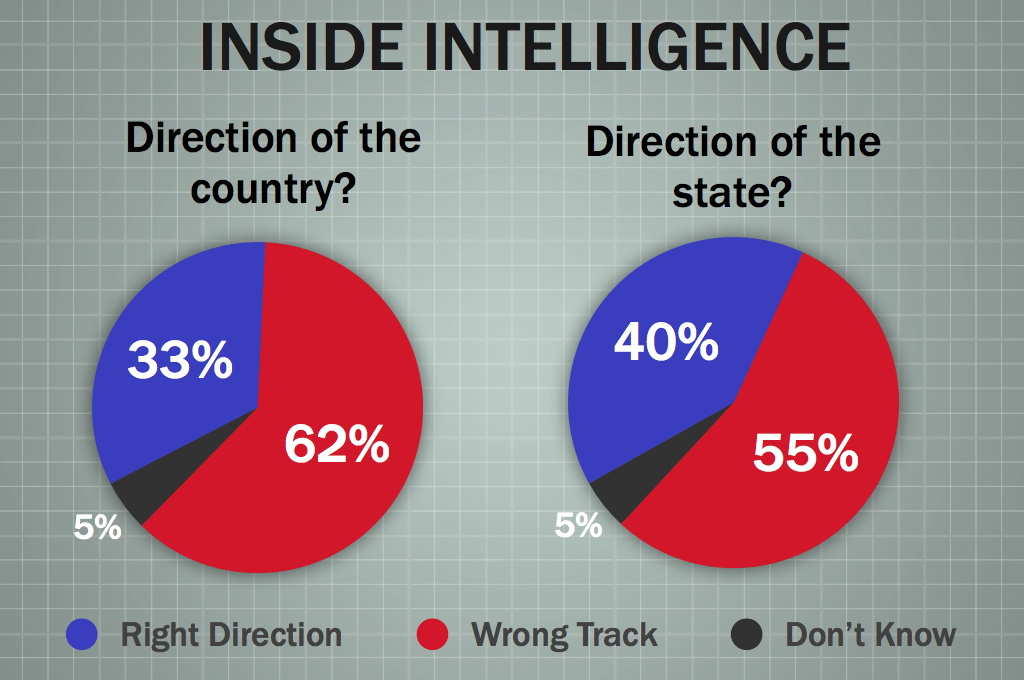 • "The world still hates us and we're a joke to the terrorists, Russians, and Chinese; domestically we're sputtering along with no meaningful job growth.  Recipe for disaster."

• "No one is leading in either party."

• "Seriously?  We've been above 8% unemployment for years, we have no leadership nationally, and the Middle East is in disarray."

• "As long as both parties refuse to work together and compromise, this country will continue on its course to nowhere."

• "But in ways that Romney would make worse, not better."

• "Fewer jobs to be had, fewer folks looking for jobs, debt continues to increase (both personal and govt), etc."

• "If there's any significant difference in the economic landscape from a year ago, I sure don't see it."

• "Government rules and regulations are bankrupting America. We must learn from the failed policies of the past that created the same abysmal failures. Obama wants more of the same, but more QEs are NOT the right direction."

• "Unemployment is only dropping because people are stopping their job search.  We need a change."

• "Obama is slowly digging us out of a huge hole left by the Bushies.  Too bad there's not a Congress that will help."

• "Pols looking for people to blame and not solutions."

• "But economic instability in the EU is still the undraped shoe." 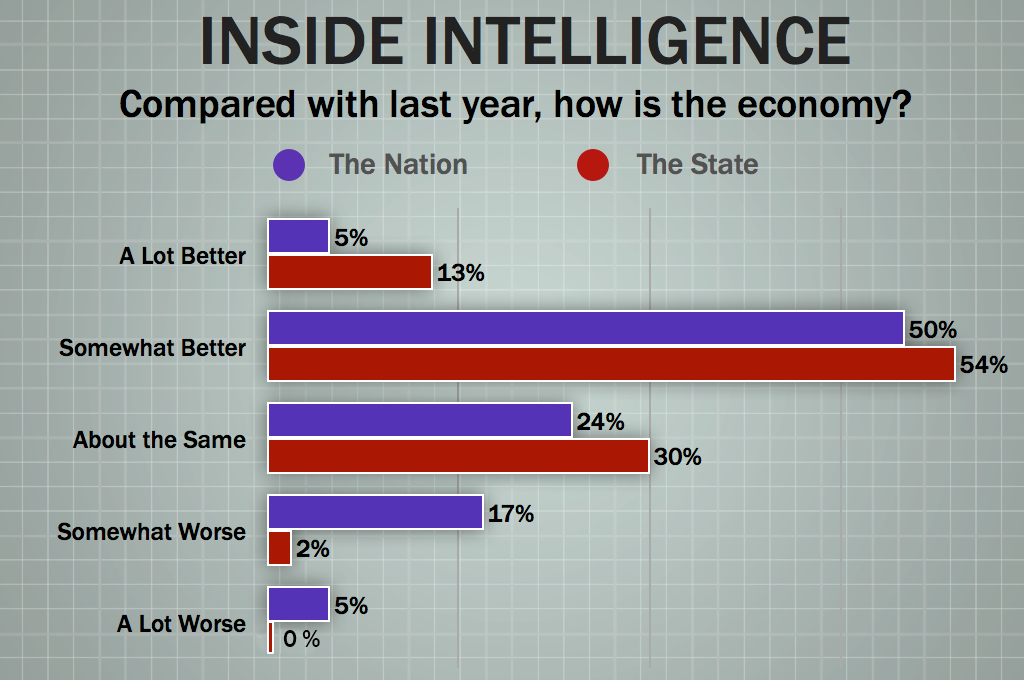 • "We are delusional about the sustainability of underfunding education and basic infrastructure.  It's all going to come back to bite us."

• "I chose don't know because neither of the other two options fit. Texas is doing some things really well, but closing its eyes to some real problems. Texas is handling its short-term issues very well. It is ignoring long-term issues - infrastructure for roads, water, etc."

• "We have statewide "leaders" who cater to primary voters and who think that vouchers, TSA groping and sanctuary cities are the most important issues facing the state.  It's time our leaders started filtering the masses and deal with the serious issues our state faces in a serious way."

• "Right track economically. Wrong track on some other important issues (like education). You can have both."

• "It's all falling into disrepair - school, roads, water.  Low taxes and less regulation are not the answer."

• "Texas is on the right track, but for only one reason:  oil & gas.  Take that out of the equation, and we're no better than the rest of the country."

• "It is not a coincidence that the Texas economy is markedly better than the rest of the country. Generations of investments in human capital and a world-class infrastructure brought us to this place.  Ironically, those who tout our prosperity the loudest are the same folks who are now hell bent on ensuring that future generations won't receive such an inheritance from us.    Shame on the shortsighted.  They will be the ruin of this great state."

• "You can't cut cut cut and expect a good outcome"

• "Growing and importing a demographic that infrastructure cannot accommodate"

• "A big thank you to the oil and gas industry and Texas being lucky enough to have these shale deposits."

• "We are better than the rest of the country, but oil and gas money can mask a lot of problems."

• "Thanks to the luck of what is three miles underground.  Otherwise we'd be Mississippi."

• "Low tax states are typically the first out of a recession."

• "Every elected official should thank the companies exploring the Eagle Ford."

• "Lots of people moving here, and escaping other parts of the country, tells a story inconvenient for you Texas-haters." 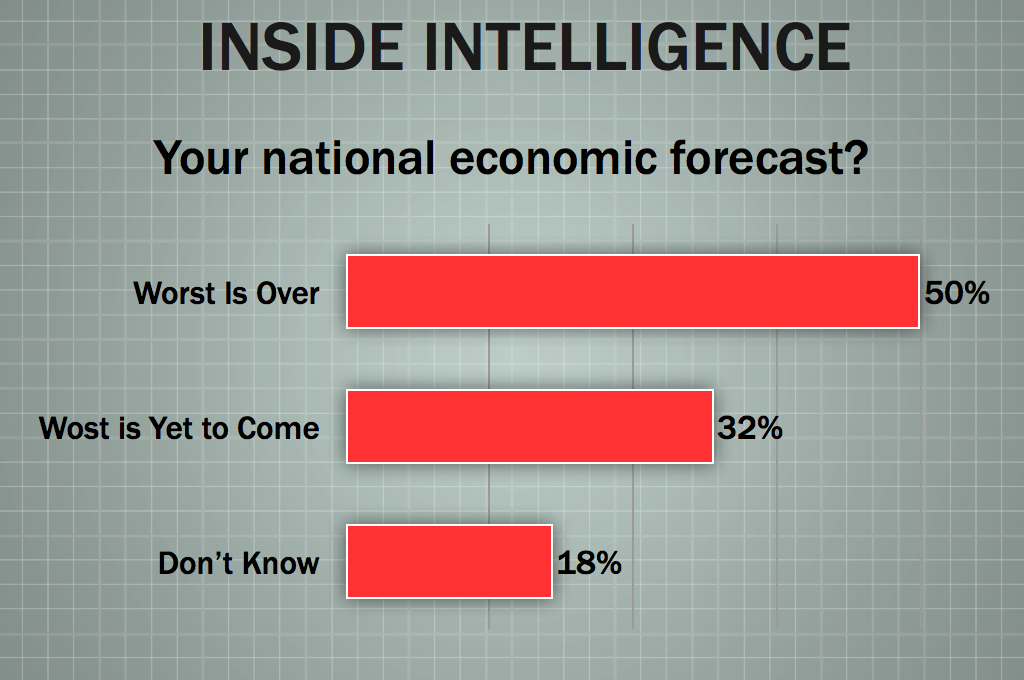 Thinking about the condition of the national economy, do you think the worst is over or is the worst yet to come?

• "The DEBT is killing us. We cannot continue to print money and expect the future to be bright."

• "Sooner or later, the bill comes due."

• "It depends on Europe, whether Obama is re-elected, and whether he finds the strength to use the bully pulpit to cow the House Republicans into something approaching rationality."

• "But Congress jacking around with the fiscal cliff is going to freak out the financial markets with increasing ferocity the closer we get to the end of the year."