We took a dip into legislative politics this week, asking the insiders about the race for Speaker of the House, the influence of outsiders on those inside races, about the nature of the Legislature, and about last week's new committee assignments in the Texas Senate.

The insiders were close to unanimous on the future of Speaker Joe Straus, with 96 percent saying he'll be elected to a third term as speaker when lawmakers convene in January. Only 3 percent put their confidence in Rep. Bryan Hughes, the Mineola Republican who's mounting a challenge to Straus.

Outside groups and activists might make noise, but they don't have any real influence on the race for speaker — at least in the eyes of the insiders. Only one in four thinks the outsiders have real influence in who presides over the House, while 70 percent say the outsiders are just that — outsiders.

We asked which chamber of the Legislature will be more likely to approve of "hot-button" bills during the 2013 session; slightly more than half pointed to the Senate, while 27 percent said the House would be more likely and about one in five called it a jump ball.

Finally, we asked the insiders to play pundit and analyze Lt. Gov. David Dewhurst's choices for committee chairs since he announced a reorganization last week. You can read selected comments to that and to the other questions below — a full set is attached. 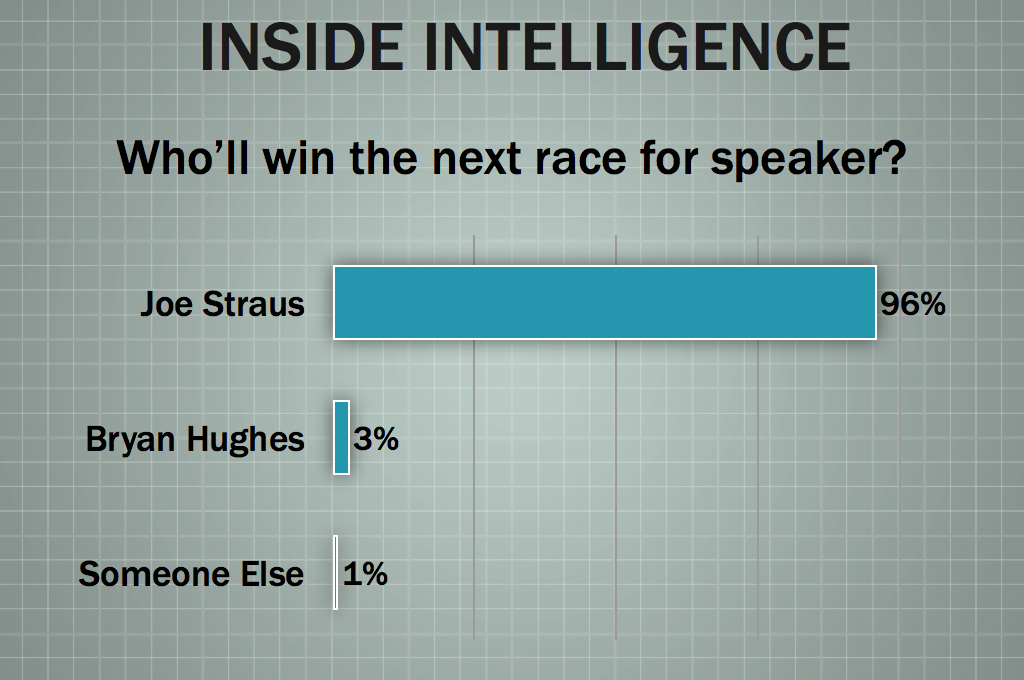 Who will win the race for speaker in January?

• "But it won't be pretty. And before it's over there will be others that will be trying to see if they can pull together a deal with the demos."

• "Right wing pressure isn't great enough yet to dislodge a speaker who's done a good job for his members."

• "Joe Straus has the advantage of a district that understands the wisdom of having a hometown Speaker.  Let MQS bluster, the Speaker is safe at home and will remain Speaker as long as he so desires."

• "It will be difficult to keep some of his votes together. Dick Armey will mobilize the grassroots and some will jump ship, but in the end the Dems will stick by him ensuring him the victory."

• "There is no speaker's race.  Some people are trying to create the appearance of a speaker's race for their personal benefit and ulterior motives, but that doesn't make it the real deal."

• "Would everyone please stop asking this already?"

• "I thought this was a done deal until Freedom Works got into the game.  They wrecked Dewhurst's US Senate effort and might do the same in a Speaker's race."

• "Democrats should pick their own Speaker candidate, act like a real opposition party and leave the Republicans to eat their own. But alas, they will get suckered."

• "Straus survived in 2011 after a wave election ushered in a large number of new very conservative members. While he lost some lieutenants in this year's primary, some potentially adversarial members also lost. Plus, there will be 6 or 8 new Democrats in the House in 2013. Where else are they going to go?"

• "If 'someone else' was going to enter the race, he/she should have done so before Freedom Works backed Bryan Hughes." 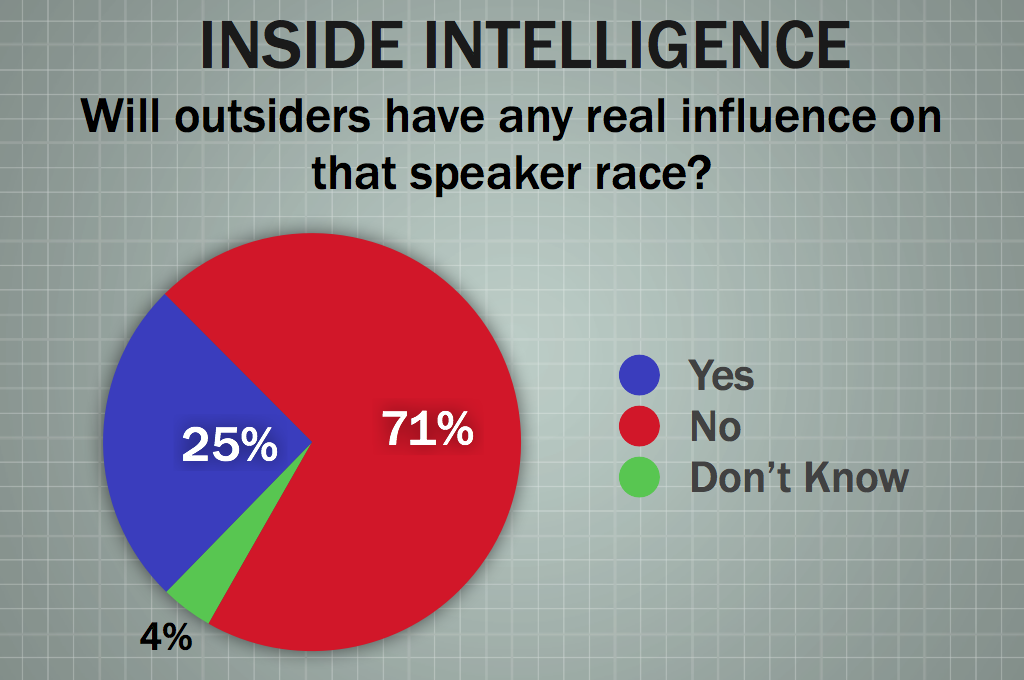 Will outside groups and activists have any real influence on the outcome of the Speakers' race?

• "Right wing groups will make life difficult for Republican members.... some won't be able to withstand the pressure"

• "Tread lightly, FreedomWorks.  Those eligible to cast a ballot in this race are not the same as the gullible right-wing base of the GOP.  Texas legislators will resent your efforts to pressure them.  Well, the reasonable ones will anyway."

• "Many consultants and companies are using their personal relationships with candidates and newly elected legislators to actively promote Straus' record and effective leadership."

• "They will make life miserable for everyone involved, but they will not be successful."

• "The threat from the Right will continue to push Straus to the Right, but it will not be enough to unseat him. Simpson in '15, however, is another matter."

• "They barely influence each other.  Spend and borrow Republicans and tax and spend Democrats. God, please don't elect someone with a brain or an open mind!" 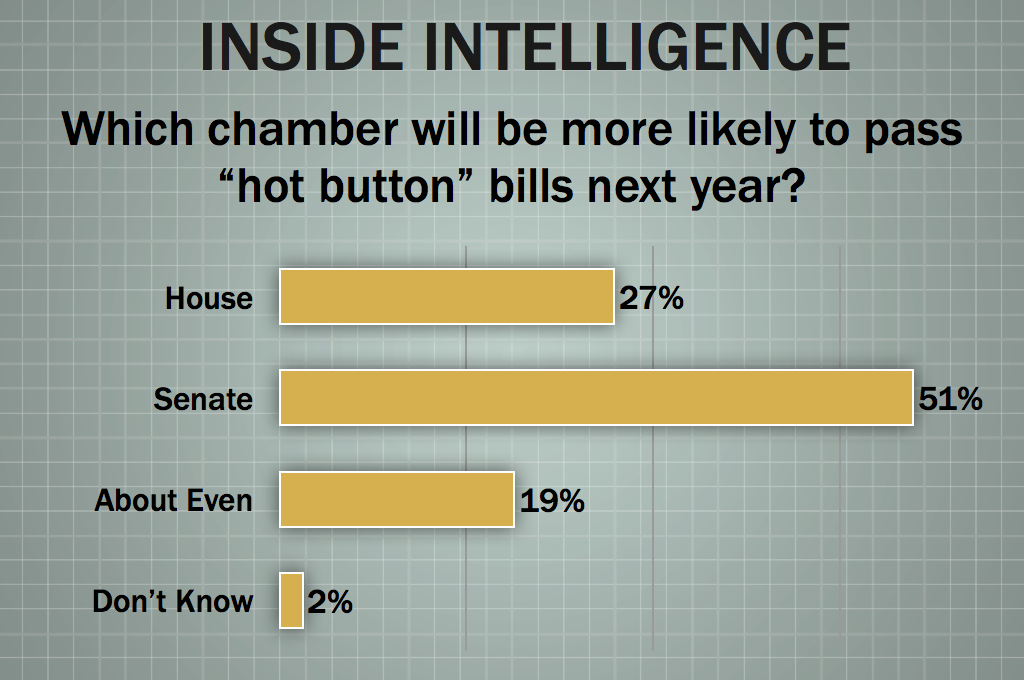 Which chamber will be more likely to pass 'hot-button' bills next session?

• "The senate is a forgone conclusion to pass all their anti bills next session; anti-public education, anti-poor, anti-public health, anti-voting rights for minorities..."

• "The amount of crazy coming out of the Senate will be astounding."

• "House is more likely to pass them quicker. And while the new makeup of the Senate will have more empathy for those bills, as long as the 2/3rds Rule is around, those hot button bills will take a little longer."

• "Passing any significant measure requires the help, direct or indirect, of the person in charge.  The presiding officer of the Senate seems to have more incentive to cater to the 'hot button' end of the spectrum, as well as a new-found willingness to do so."

• "Who'd a thunk we'd look to the house for temperance."

• "Trick question? Like the senate has killed a bill at any point in living memory?"

• "DD has no reason to hold back on far right craziness. Straus will be the reasonable man he is, except for a few bills."

• "With Davis likely gone and Dewhurst stacking the deck on committees, prepare for some wild bills from the upper chamber."

• "Once that stuff gets to the floor, a majority will be sufficiently afraid of primary challenges that they won't dare to vote no.  And in the Senate, it's possible that a majority might be all that's needed - depending on the future health of the two-thirds rule."

• "Plenty of crazies in both chambers.  Finally."

Be the Pundit: What’s your take on the Senate committee assignments announced last week?

• "Dewhurst is sticking with his 'conservative' values espoused during the recent US Senate campaign by naming Patrick to chair Senate Education and Seliger to Higher Education.  Eliminating the Senate IRT Committee and removing Sen. Zaffirini away from Higher Ed is a big blow to the Democrats as whatever 'partisanship' existed in the East Chamber is now gone."

• "It's an indication that vouchers will pass the Senate and Rick Perry's assault on the University of Texas will receive a thorough hearing in the Senate."

• "Dewhurst caves yet again to emerging ultra-conservative majority.... he hastened to placate key members before they could organize and strip him of some powers"

• "Dewhurst adapting to the shift of power that is coming with the new Senators. If he is going to be taken seriously as a 2014 re-election contender then he has to make this shift. The committee member assignments in a couple months should be even more evidence of this shift to the right. If he doesn't tilt certain committees to the right then he'll leave his flank wide open to attack from conservative groups."

• "Zaffirini finally reaps what she sows."

• "The Dew made a technical error trying to go to the right. 1) He has already been labeled as a moderate by the Republican base. It doesn't matter what he says or does, he will always be to the left of the base; 2) He has empowered those that will most likely threatened his re-election; and 3) He has relinquished most of his power and won't be able to govern. Has anyone acquired knowledge from studying the ways of Lt Guv Bullock?"

• "Don't think the pendulum can swing any further to the right without gravity starting to its pull.  Yes, it will take a while, but this looks like an overreach."

• "Committee Chair changes accurately and fairly reflect the changes in the Senate membership and in the Republican Party."

• "After losing so badly in the primary, it appears that Lt. Gov. Dewhurst is covering his right flank to help keep his 2014 options open. That said, it is unlikely to be enough to protect him from the stable of statewide R's gunning for his post."

• "School vouchers will be on deck."

• "Dewhurst stacking blinked. Rather than trying to turn the tide of extremism, he grabbed a surfboard. Major mistake. Tea Partiers will never accept him and he empowered a huge rival in Patrick."