The first round of debates are now behind us, but before Paul Sadler and Ted Cruz started arguing on television and Barack Obama and Mitt Romney held the first of their pre-election forums, we asked the insiders about the stakes.

As always, we asked for comments and attached the full set; a sampling follows: 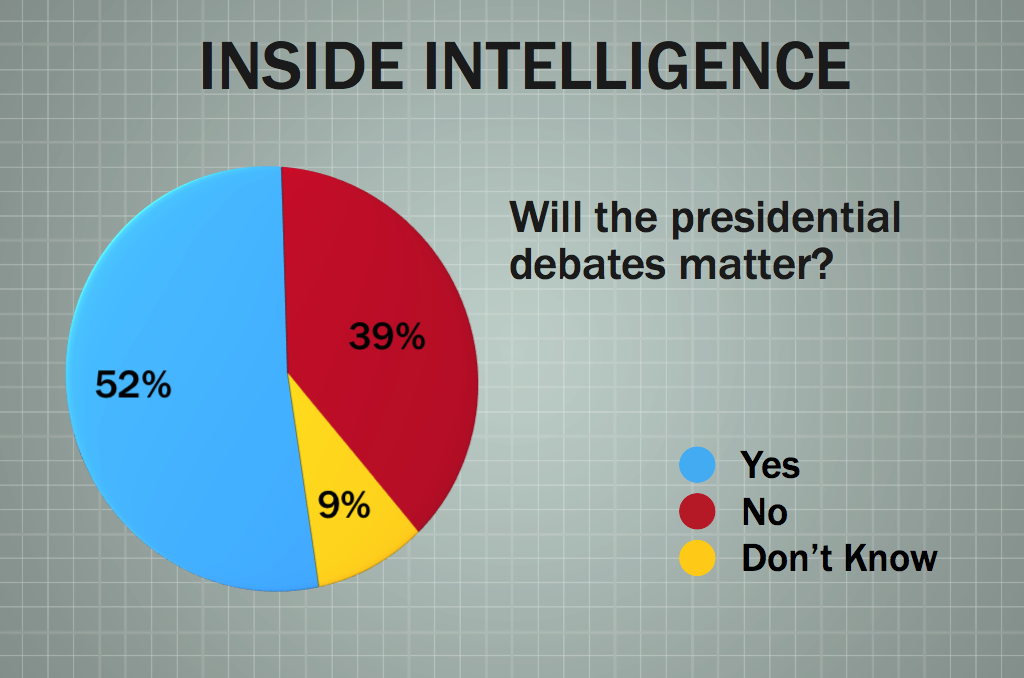 Will the presidential debates make any difference in that race?

• "Not unless Romney does surprisingly exceptionally well. Otherwise, this race is over."

• "Is there anyone in this country who is still undecided?"

• "I hope so-called independents won't base their decisions on sound byte answers (not to mention non-answers)."

• "Only if one of them totally screws up."

• "Based upon the recent polls, I certainly hope so."

• "Mittens is such a compelling presence, surely the country just needs to hear more from him directly to turn the tide in his favor.  I'd bet $10,000 that Obama will fight Romney to a draw, if not beat him outright in the debates."

• "I doubt the debates will have much sway. Neither candidate seems likely to have an oops moment."

• "These national debates seldom turn a race around, but always influence the outcome."

• "It's a chance for many people to see Romney for the first time - unfiltered."

• "More so for Romney.  Not because of his standing in the race but to be able to deliver an unfiltered message."

• "Unless Obama admits to being the anti-Christ chosen by the 33 degree Scottish Rite Freemasons to bring in tyranny under a communistic regime; no it won't make a bit of difference as Mitt is toast."

• "The only time a debate becomes a game changer is when the candidate does (GB41 and his watch) or says (TXGuv Ooops!) Something that defines them in the wrong light."

• "The bar is set high for the President and if Romney appears to outperform expectations, then Romney will get a bump from the debates."

• "Certainly not in Texas" 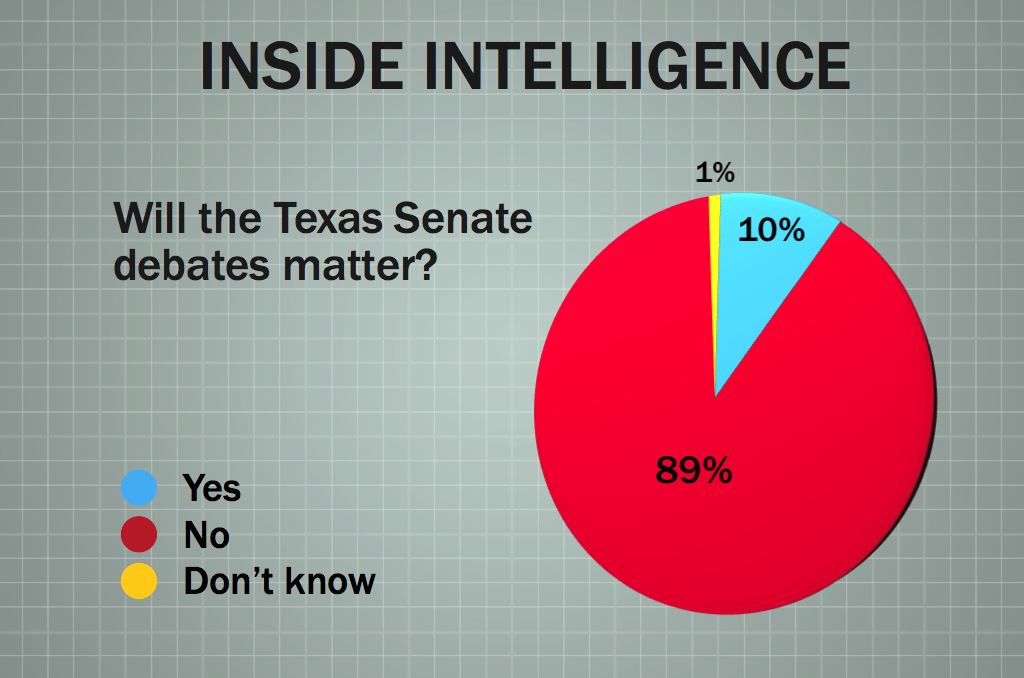 Will the U.S. Senate debates in Texas make any difference in that race?

• "That old 'if a tree falls in the woods and no one is there to hear it' question... same principle here."

• "Can't imagine anything short of a major blowup changes the outcome of this race, especially with Obama at the top of the ticket."

• "The press will not publicize the debate enough for it to matter."

• "Dems are not yet competitive"

• "I thought Ted was already in DC, there will be debates? With who?"

• "It might change some votes, but the outcome of the election is already determined."

• "Both Sadler and Cruz will debate well.  However, Sadler will come across as rational; Cruz as radical. The only way these debates don't make a difference is if no one is paying any attention and the press highlights the show and not the substance." 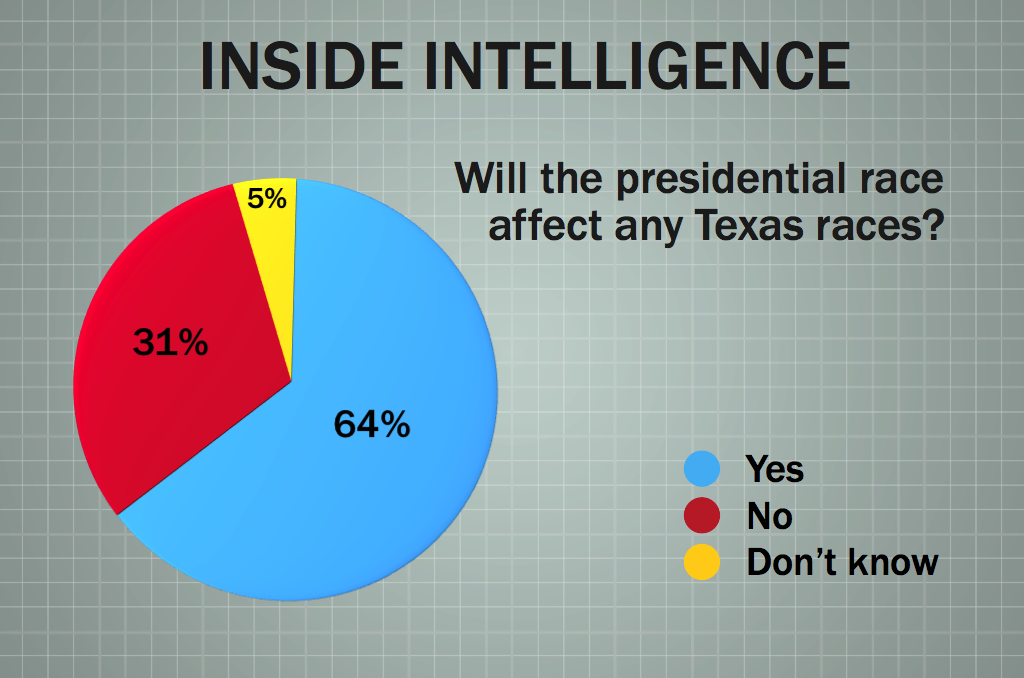 Will the presidential race affect any Texas races?

• "Look for Senator Wendy Davis to benefit from Obama turnout as she did 4 years ago."

• "Presidential race will increase turnout for Democrats.  Even though they won't win, they'll want their voice to be heard.  Republicans vote no matter what, so the impact won't as visible."

• "Turn out and voter enthusiasm won't help Dems.  In the Texas Senate, no Obama coattails to help Wendy Davis."

• "It will be interesting to see how the presidential race impacts the SD 10 race. Obama turns out Davis's base, but he will also turn out Rs and Texan independents who want to make him a one term president."

• "Every national race has a coattail effect.  If you don't believe that ask all of the Texas House democrats who lost in 2010."

• "The higher turnout of presidential elections over off-year elections will benefit the Democrats. Democrats should pick-up 6 to 10 seats in the Texas house."

• "There will be some down ticket impact in places like El Paso county; the Margo/Moody race will be closer likely impacted by the national race." 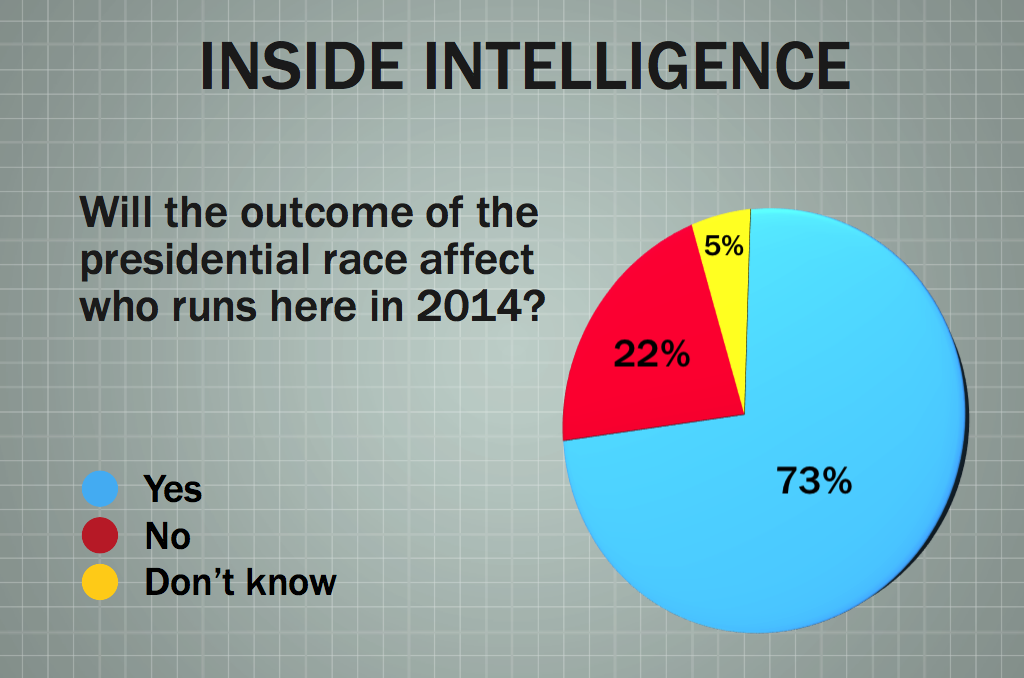 Will the national outcome of the presidential race affect who might run in 2014 in Texas?

• "If Obama wins (probably) opens up the field"

• "Look for San Antonio Mayor Castro to run for Governor if Obama is re-elected and Perry runs for re-election.  He might keep his powder dry until the following cycle if Obama loses and someone like Abbott is running for Governor."

• "If Romney wins, I suspect Perry will not seek re-election"

• "With a 2nd Obama term, Perry's team cooks up their story about pain killers and lack-of-sleep as an excuse of his poor showing.  They dust off the boots (with lower and more comfortable heels) for a 2nd run."

• "If indeed Perry is considering another run for the WH, may impact his 2014 plans for Gov."

• "If Romney loses, look for Perry to gin up loudly and quickly."

• "If Obama wins, Perry has a clearer shot at the 2016 national nomination.  That probably means he'll run for re-election, since governorship brings so many perks (free travel, security, etc.)."

• "Regardless, Rick Perry is on his way out. . . looking for a graceful exit."

• "Please, let's not start with the Perry 2016 nonsense. Republicans outside of the state are now 'Once Bitten, Twice Shy' when it comes to supporting a Perry presidential bid."

• "An Obama win will further strengthen the hard right.  A Romney win will open up more opportunities for Democrats in the midterms."