We're scouring the ballot this week and next, asking the insiders who they think will win key statewide, congressional and legislative races in November.

The quick version? They pick Sharon Keller for reelection as presiding judge of the Texas Court of Criminal Appeals; state Rep. Randy Weber, R-Pearland, in the CD-14 contest; state Rep. Pete Gallego, D-Alpine, in the CD-23 race; and Sen. Wendy Davis, D-Fort Worth, in her reelection bid in SD-10. There is plenty of room for argument, as you'll see in the full comments (attached) and in the sampling below.

Before we get to that: Paul Sadler, as executive director of the Wind Coalition — lobbying for clean energy — has been on the list of insiders for some time. We didn’t think to take him off when he declared for U.S. Senate — our mistake — and that’s why he was among the voters on last week’s survey, which included the question, “Who do you think will win the race for U.S. Senate?” We can guess how he voted, but we don’t have a way to check that, since we set up our surveys to keep the votes separate from the names of the people who cast them. However he cast his vote, Sadler got hammered in the survey: 96 percent of the insiders predicted Republican Ted Cruz will win that race. You’ll see Sadler’s name in the list below, as this survey was done before one of our readers caught the good. It’s been removed from future surveys. 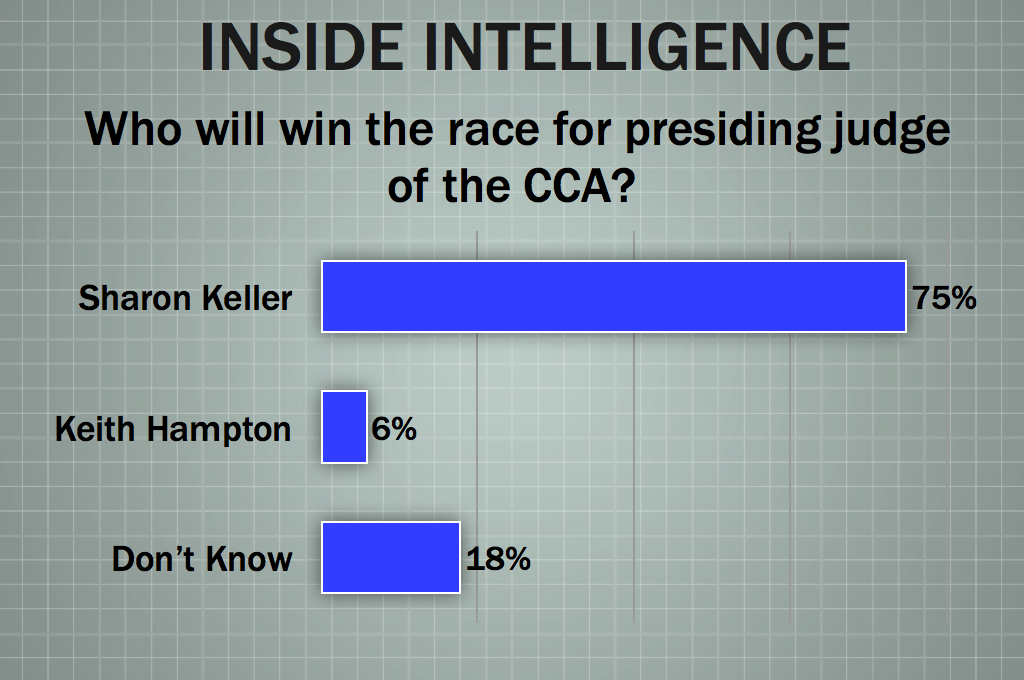 Who do you think will win the race for presiding judge of the Texas Court of Criminal Appeals?

• "Still not time for a D. But if Keith wins somehow, will Terry Keel go back to practicing criminal appellate law?"

• "Keller was cleared of the alleged misconduct charges, and Hampton doesn't have the money to remind people of it all."

• "Sharon 'hang 'em high' Keller is most in step with Texas."

• "Even though I know R's and D's that agree she is not fit to serve on the bench, she will win because of the low level of communication in the race and the partisan leanings of the state."

• "Sadly, no one knows anything about this race, so it will largely default to a generic D vs. R matchup. Hampton will probably mop up on endorsements from newspapers, etc., which will close the gap a bit. But Keller should still win."

• "Sharon is an excellent judge. The media needs to recognize her stellar qualities." 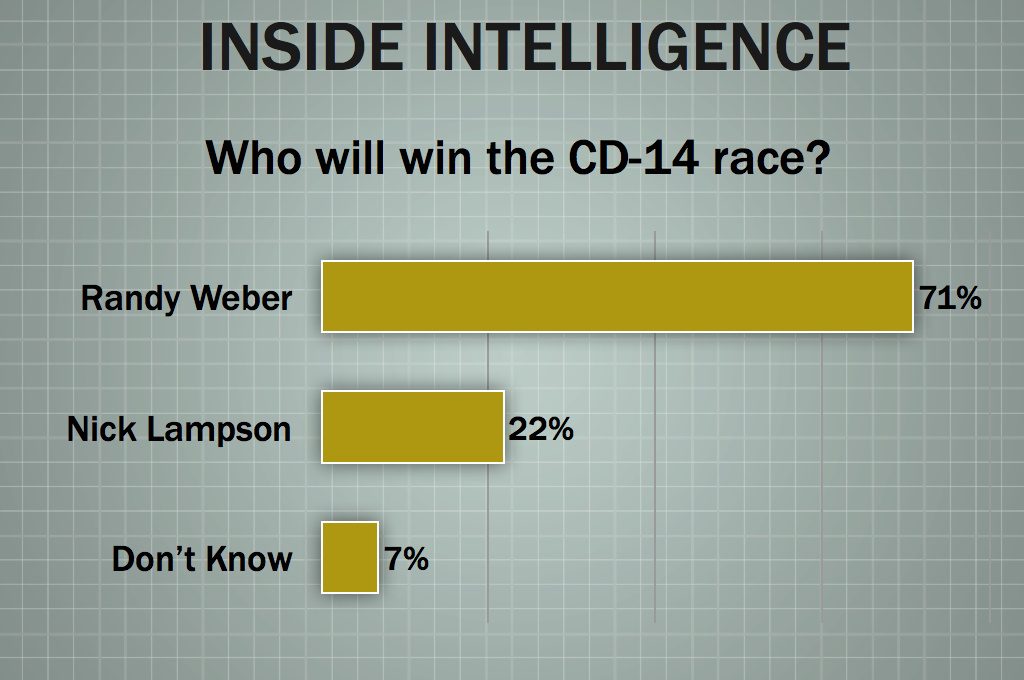 Who do you think will win the CD-14 race?

• "District favors an R, and Nick can't run against the ghost of DeLay again."

• "The district has a heavy African American voting population. Republican/Tea Party has for some reason seemed to have teed off on black folks, protestations aside Nick does well with average folks"

• "This one may sneak up on people. District is marginally Republican, but Lampson will get a homer vote out of Jefferson County, as well as some crossover from Clear Lake folks who remember his support of NASA. Will be close."

• "This election should turn out record numbers of conservatives who rightly FEAR for our country if BHO is re-elected. Weber is a fine conservative."

• "Nick is a serious candidate but the playing field is tilted too far against him."

• "It will be close but Weber's negatives outweigh his positives."

• "Any Republican will win in this election." 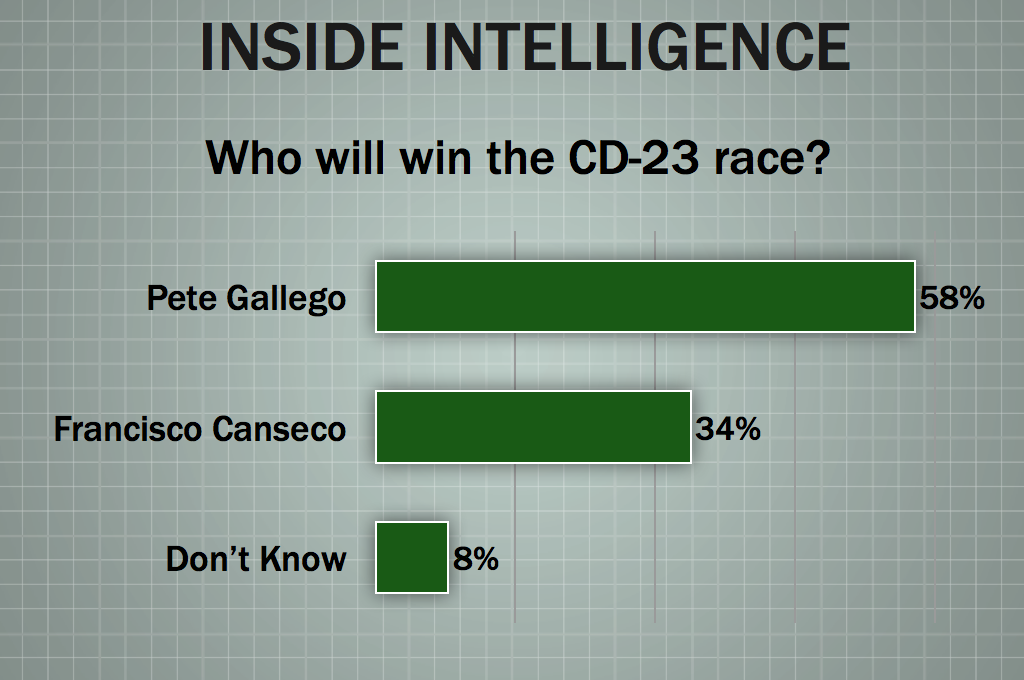 Who do you think will win the CD-23 race?

• "Too early to predict the outcome of this race at this time."

• "Voters in the district have known Pete for a lot longer than they've known Quico. They trust Pete and will send him to Washington."

• "Pete had to outspend Ciro by 12-1 and get help from outside groups to win. Quico will have money and will bring the fight to Pete."

• "I don't know of any group of voters in Texas who want to elect another big government liberal, which is what Gallego has proven to be."

• "The final result in CD23 may end up being lopsided but there is no way to predict that now. On paper, this is the most competitive Texas race this fall, with the possible exception of Davis/Shelton in SD10."

• "Mayor Castro did a great job improving Gallego's chances with his convention speech." 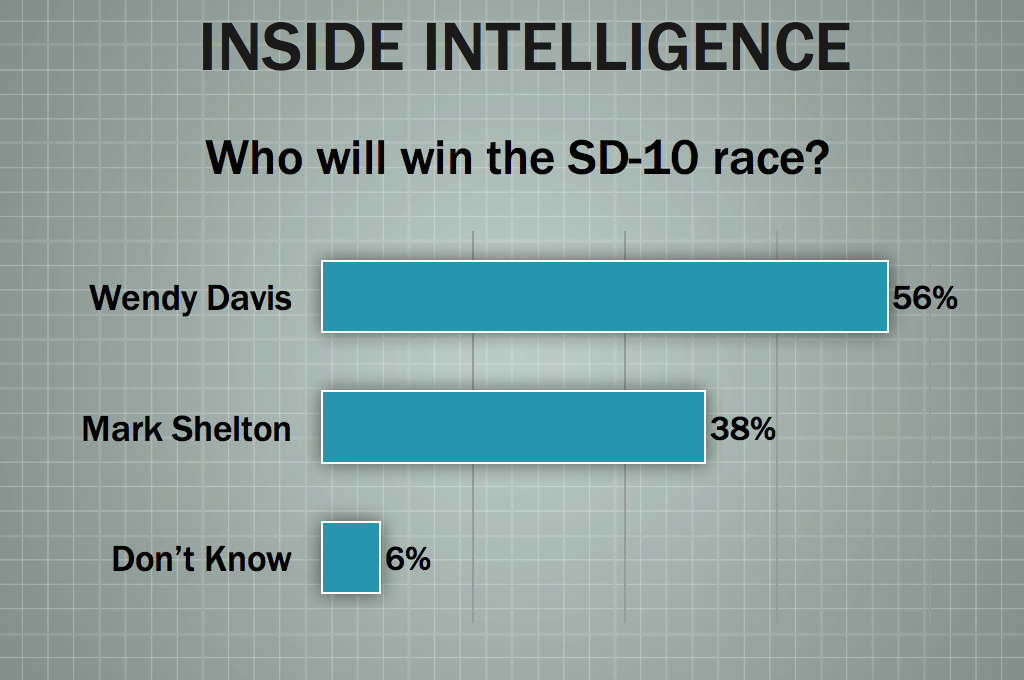 Who do you think will win the SD-10 race?

• "As much as I disagree with Sen. Davis, she appears to be outworking Rep. Shelton. I hope I am wrong on this one!"

• "No Obama coattails or a weak Brimer to carry Davis over the finish line this time around."

• "Without a Libertarian, it's quite an uphill race for Sen. Davis."

• "Shelton is a Tier II recruit at best and SD-10 has only gotten to be more favorable territory for Davis since her victory in 2008. Republicans should be wary because the more they target her the stronger they make her following statewide."

• "This will be the litmus test for Democrats. If they can hold their ground here there may be hope for them statewide in the next decade."

• "Brimer lost this seat last time by running to the courthouse instead of to the voters. I don't expect Shelton will make the same mistake."

• "Wendy is the next Dewhurst, needs to stop measuring curtains."