Act surprised: The insiders think the state budget will be the signature issue of the next legislative session, ranking that above public education, health care and Medicaid, infrastructure — you name it. Many said the other issues are important but hinge on finance anyway.

Almost half think the state will eventually decide to expand Medicaid under the federal Affordable Care Act, but two in five think the strings attached to that money — an amount estimated as high as $100 billion over ten years — will keep Texas budget-writers — and the governor, who has expressed doubts — from accepting it.

A full set of the insiders' verbatim comments are attached, as always; a sampling follows: 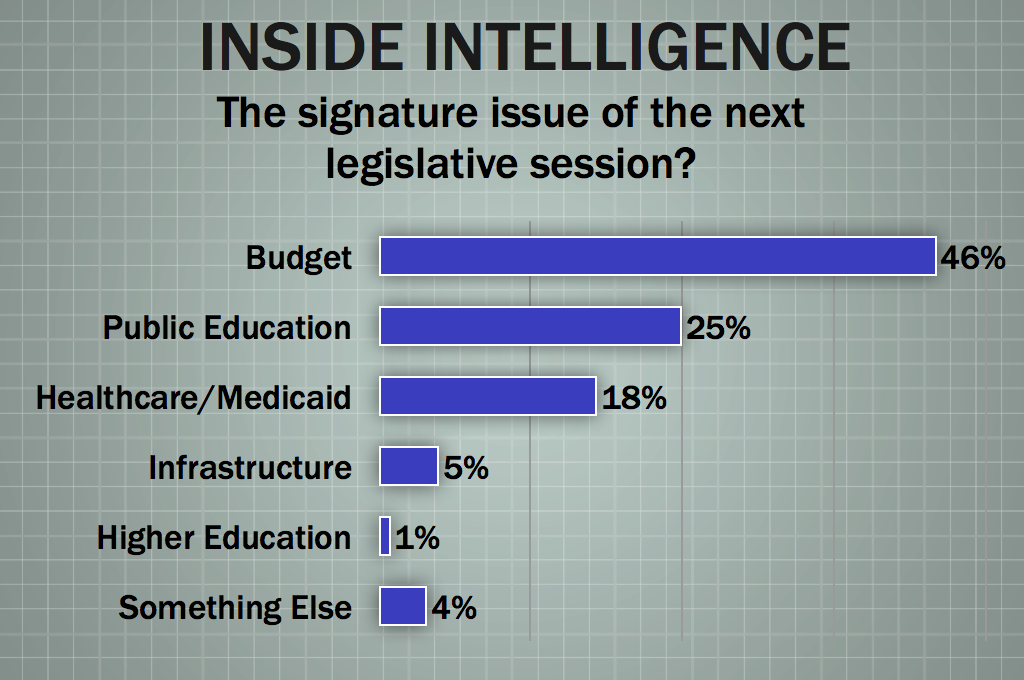 What will be the signature issue of next year’s legislative session?

• "There will be ongoing discussions on Healthcare in the wake of Obamacare."

• "Education should be the biggest issue, but I think lawmakers will punt and wait for a court ruling to force legislative action on education."

• "Do not underestimate the power of pissed off moms who have lost confidence in their local schools and are looking for somebody to blame."

• "Each of these options comes back to funding, which makes the Budget king of the issues."

• "Budget as always, instead of working on water and transportation which they should do. Because god knows the lege does not like to tackle anything too difficult."

• "Outside of what hinges from the budget - look for a return of the "great school voucher debate" especially with a big focus on public ed accountability and the make up of the members."

• "No matter what your ideological stripe, it's the spending, stupid."

• "Public Ed is the singular issue that is tied into everything else. That is the battleground, across the board."

• "Any of these issues could be #1 (as well as groping by the TSA), but public education has the most at stake with the numerous lawsuits and no clear direction, other than vouchers, about how to solve."

• "The lege and Governor will not do what it takes to address water and highway concerns...patchwork at best...will continue to kick the can down the road..." 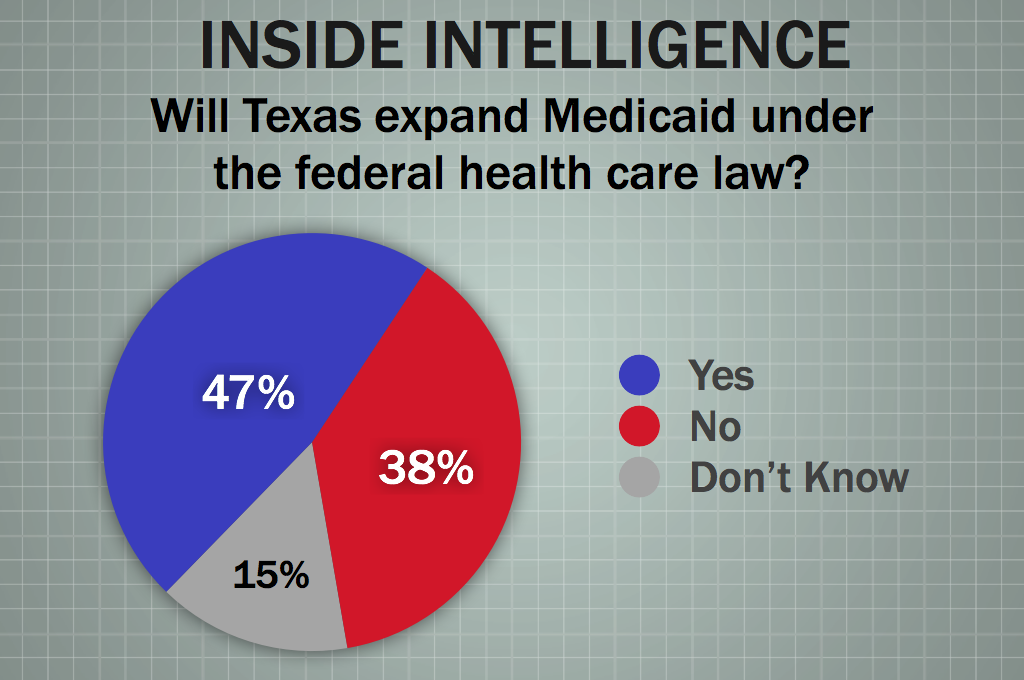 • "No way given the general political leanings of the State."

• "If Texas is going to pay for expanded coverage, why not go it alone instead of accepting federal funds with strings attached?"

• "The new Republican President and Congress will REPEAL Obamacare."

• "The feds will ultimately provide states flexibility for expansion in a grand deficit reduction trade-off. Think welfare reform in 1997"

• "It will be too expensive not to. And local hospital districts will go broke if the state continues to hold out for stupid political reasons."

• "It's just way too much money. Posturing aside, I think they will come to the table with the Feds."

• "Depends on the outcome of the presidential race."

• "The pragmatism of the budget writers will trump the grandstanding of the governor."

• "Of course it will. These anti-fed chicken hawks are like the kids in college that talk about being on their own while taking mommy's money." 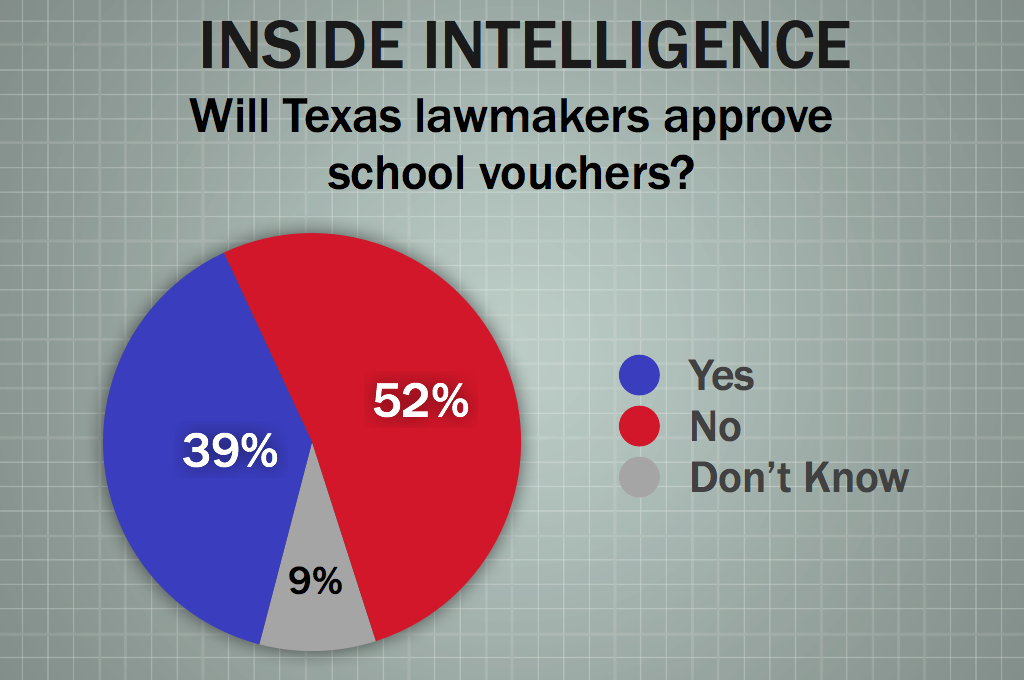 Do school vouchers stand a real chance with Texas lawmakers next session?

• "For the first time, there may not be enough moderates to stop it."

• "But they should. Too many voters do not understand what they are or how they work and hopefully over time that will change. Right now it is easy to pitch vouchers as being against teachers and public schools when the reality is that they provide freedom of school choice to many not able to afford that choice."

• "Kinda depends upon the Senate."

• "It's not a simple R vs D issue. Vouchers still do nothing for rural areas."

• "A legal voucher program would require several billion new dollars for public ed and that money is not available."

• "As someone else said, 'If we can't afford public schools, how can we pay for private ones?'"

• "They should! The bureaucrats have gone too far in their ceaseless campaign for more money and less accountability. Choice may be the only option."

• "The Hispanic constituency is a growing group that favors vouchers. Hispanic legislators - the majority being Ds - will have to make some concede some of their opposition."

• "Vouchers stand a chance, but I wouldn't bet that way." 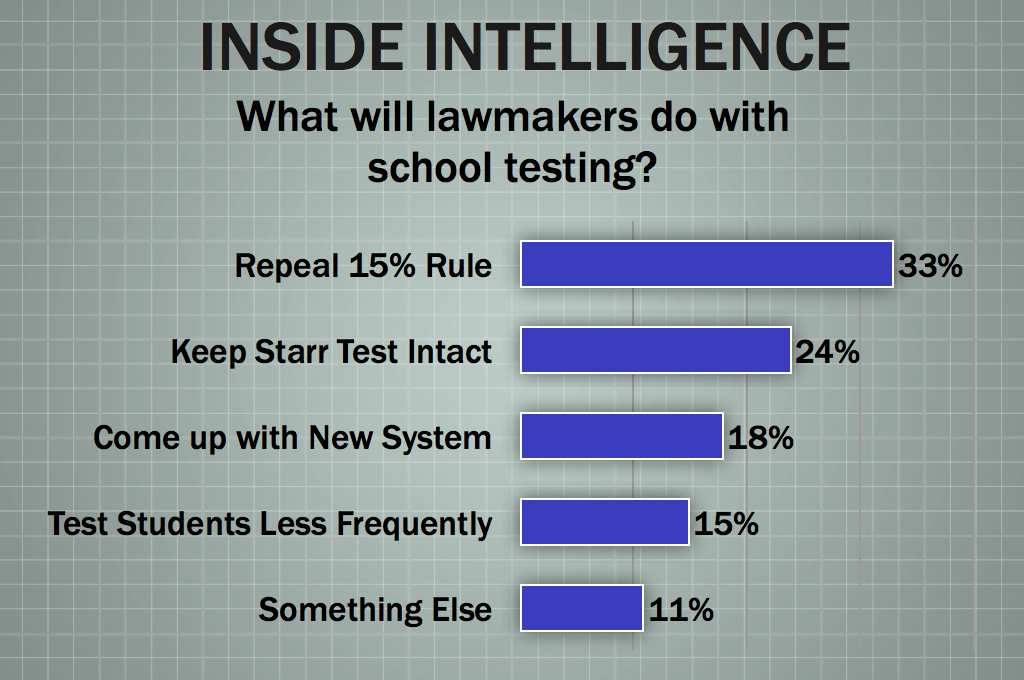 What will state lawmakers do about high-stakes testing in public schools?

• "With Eissler, Hochberg, Shapiro all gone, there's no leadership for a whole new system. The new group will nibble around the edges, make the testing regime temporarily worse than before, and try to learn enough to do something real in 2013."

• "I don't think these options are mutually exclusive. They'll likely enact a patchwork of fixes that touches on each of these options (and more)."

• "They will talk about testing and do nothing"

• "Both repeal the 15% rule and cut back on amount of testing. Whatever progress testing has brought to Texas, especially to those students who had historically been ignored, has burned itself out."

• "Corporations are making too much money on testing. They will gear up with big-gun lobbyists too make sure the status quo prevails."

• "There is test fatigue in Texas, and legislators will have to do something to boast they did something to help.