When the results of the runoff elections were in, we asked the insiders for their interpretations, starting with the effect on the state's top leaders. The verdict? A downer for Gov. Rick Perry, a huge downer for Lt. Gov. David Dewhurst, and a wash for Speaker Joe Straus.

Most of the government and political insiders think this was Dewhurst's last run for office, though some think he'll run again, either for reelection or for another office.

Did the results say anything about Straus' chances at winning another term as speaker? The insiders were divided, with about the same number saying it helped and saying it hurt. One in four didn't choose either option.

We've attached the full verbatim responses, including the answers we got when we asked the insiders to play pundit and give us their analysis of the election results. A sampling follows below: 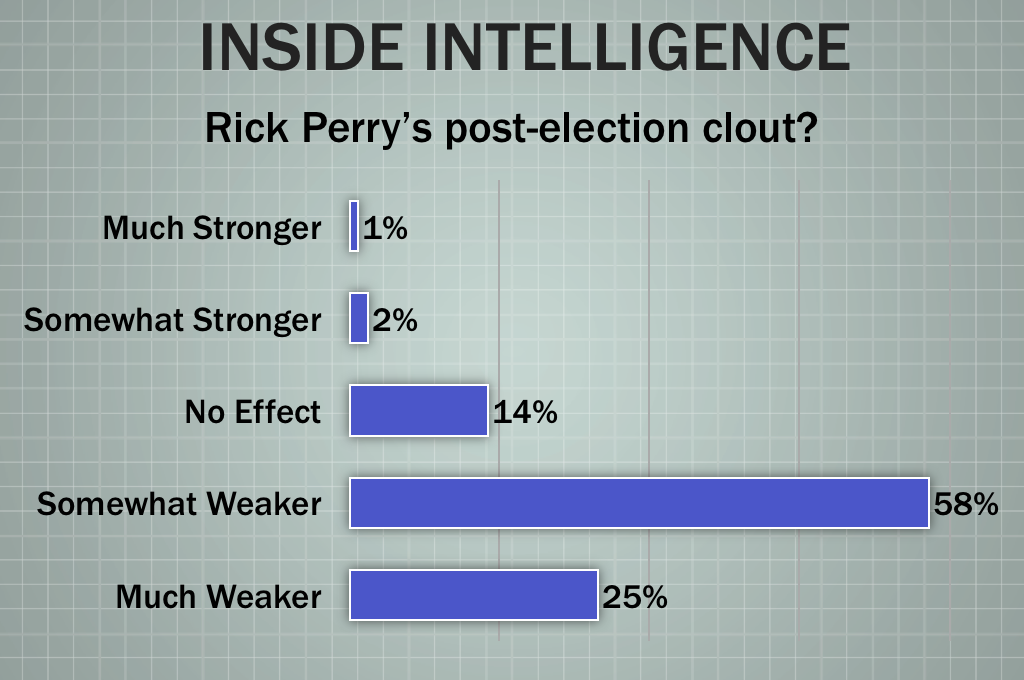 How will the election results affect the clout of top state officials?

• "Between his primary/run-off endorsement record and his national performance, RP has seen the luster come off his political shine. DD and JS remain in relatively the same position, even if they've got more conservative members."

• "All will be reacting, directly or indirectly, to the shadow of the Tea Party."

• "There are a lot of people that will try to say that Perry is weaker and that he has less influence. Like Perry always does, he will get a pass on this with the Republican voters. Have the Texas Poll as the favorables of Perry. Straus easily holds he Speakership and will continue to drive Empower Texan crazy/sane." 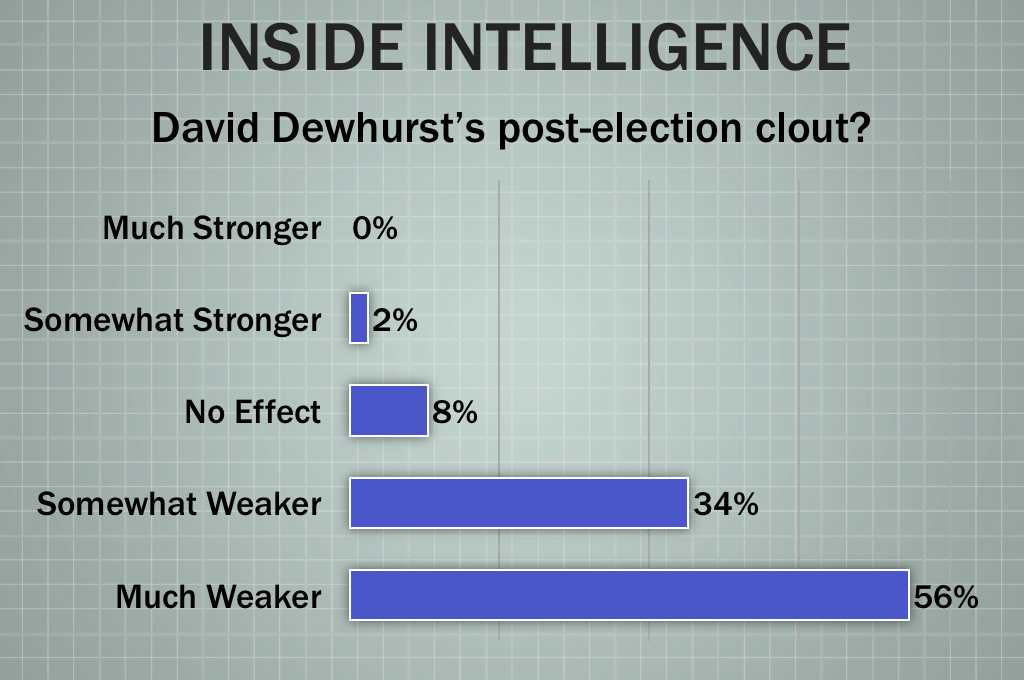 • "Rick Perry has no stroke in his own state. If Dewhurst remains in office, he will be neutered and furthered embarrassed by the senators. Straus has his head on a swivel, if not the chopping block."

• "Conventional wisdom says they've been hurt, I know, but all three can be fine, if they're flexible. They each have a lot of residual power."

• "Perry or Dewhurst will be challenged next election. Probably, by Abbott."

• "2012 has proven to be a very bad year for Gov. Perry. His disastrous showing in the presidential race appears to have significantly damaged his standing at home. Dewhurst is, of course, weakened somewhat by his US Senate primary loss, but he wasn't that strong to begin with. Straus appeared to have emerged from the primary with a wash. He lost some lieutenants, but some unfriendlies were eliminated as well. That coupled with a half dozen or so additional Democrats, should solidify his position."

• "Can't be good for either Perry or Dewhurst. I don't have a clue on Straus, though it's a given that the tea party folks will be energized and flexing. My bet is that he is back at the big podium in January." 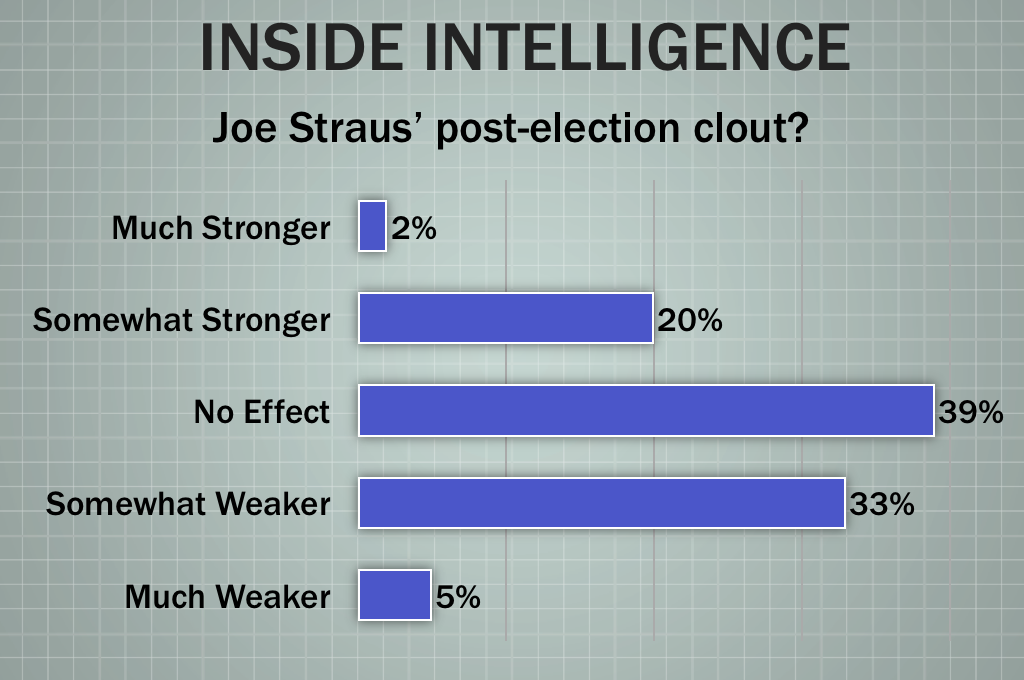 Do you think David Dewhurst will run again, either for reelection or for another office?

• "Too old. Already tagged as out of touch with the base/electorate. Some say his heart hasn't been in it the past couple of sessions. Might be time for the cowboy to rope his last calf and retire to the ranch."

• "What's he gonna run for? Gov? He's liberal compare to Perry so he can't run on a Tea party platform, and he sure as hell can't run as a moderate after he tried to sell himself as a conservative. The only thing he has is to stay second in command, but now he's gonna have to really fight for it."

• "Think the "players" on the bench will finally get a chance to move up. Dewhurst hangs up his hat next go round." 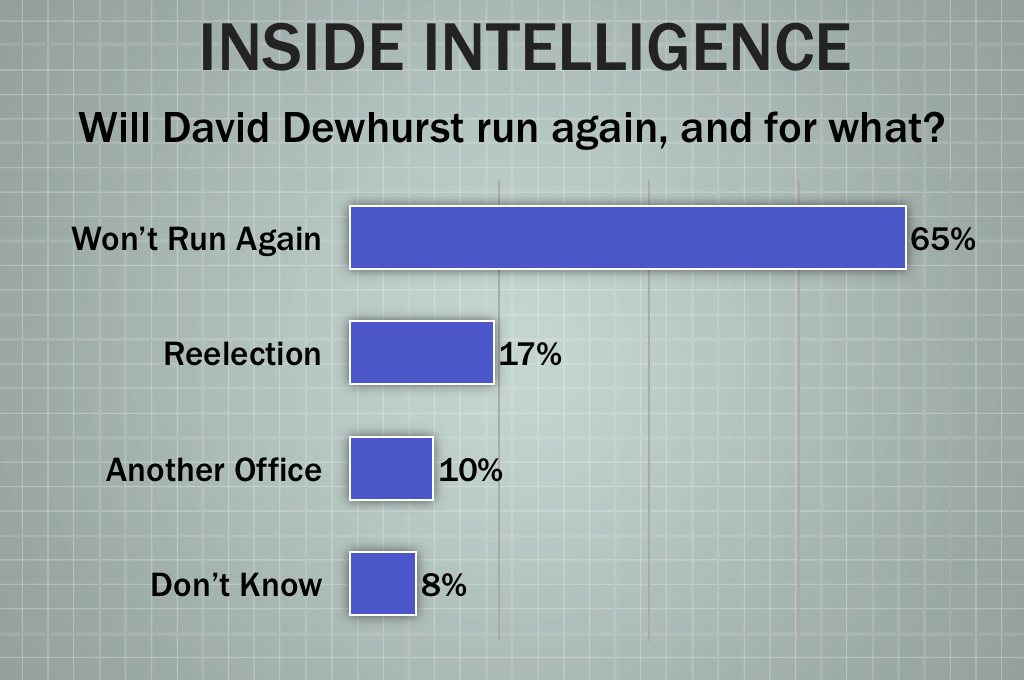 • "He will never win another race in Texas."

• "No reason to believe Dewhurst could win for Governor and he has lost enormous credibility at the capitol."

• "The party Dewhurst helped create has left the building. He can't relate and doesn't want to relate to those voters who now decide republican primaries."

• "It's time to fire up the Gulfstream and head to the Chateaux."

• "I obviously don't know his plans, but would guess that there will be tremendous pressure for him to step aside from those with higher ambitions."

• "He just ran the worst campaign this side of Rick Perry's presidential campaign, outspent his opponent 3 to 1, and lost badly. He's done."

Have the results so far helped or hurt Joe Straus' chances of another term as Speaker?

• "He has worked hard to pick up support from new members. He is everywhere."

• "While the results hurt the Speaker's chances, still no candidates who can muster the votes to defeat him." 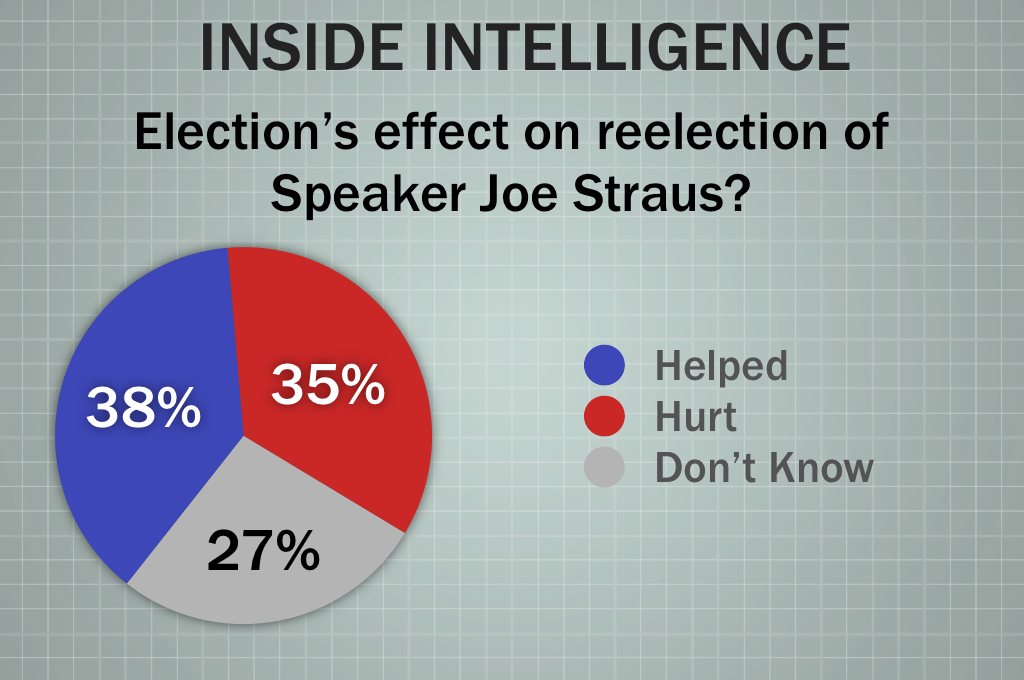 • "The far right will never be comfortable with Straus... and we just elected a BUNCH of far right guys..."

• "As the incumbent, Strauss stays unless someone pushes him out. Nothing has occurred that is remotely close to pushing him out. Annoying? Yes. A threat to another term? No."

• "Losing chairman like it's going out of style can't be a good thing."

• "Straus suffered marginal damage in the run-off after a substantial loss of lieutenants in the primary. What he leads now is a House even more dominated by anti-government radicals. His time as Speaker - never fun - will be even less-so next year."

You be the pundit: What's your take on the election results?

• "I thought conventional wisdom was that if turn out were higher it would be good for Dewhurst, that Cruz needed low turn out to win. Boy, were we wrong! Looking ahead: what does Abbott decide to do with $12mm in the bank?"

• "Anti-establishment. Not a good time to be an established incumbent running against an "outsider"."

• "Not a good time to be an incumbent. Tea Party is more organized and effective and has become a bigger player and consideration in politics - Bipartisanship is dead for the time being."

• "Dewhurst wasted his money and his consultants got rich."

• "You reap what you sow, and Texas Rs have encouraged the far right to the point that it came around in the case of Dewhurst and Perry and bit them in the ass. Serves them right but is really bad for the future of our state."

• "The electorate has lost faith in incumbents. I believe that Washington is the culprit for this."

• "People are trying to make Cruz v Dewhurst into something more complicated than it was. It was simply the case of a relentless candidate against an incumbent who had not been in a REAL campaign in a long time."

• "Leadership should not have played games with redistricting. Otherwise, the primary would have been held on the regular date and the turnout would have prohibited this from happening."

• "Shows how split the rep party is and only time will tell if the ones who have been funding the party will continue to do so. Maybe TLR can get tea party money to take the place of some who are not supporting them any more"

• "The Cruz victory will intimidate Republican candidates and office holders to move further to the crazy right's positions. Long term, it will drive moderates and independents away from the Republican Party."

• "Perry seen as loyal to his friend. Cruz becomes the new Dan Patrick. It was a bad night for incumbents."

• "I was one of the very small percentage of insiders who said in your survey months ago that Cruz would win. It looks like the majority of us were smoking too much of Inside Austin!"

• "The base in the republican party can elect a Hispanic in the primary."

• "Could not be happier for Texans. The good ole boy network can no longer inflict absolute control with their money."

• "1) This is the first election where the non-Texan groups have dictated the Texas Republican Primary. 2) In 8 years we will look back and identify this cycle as the reason independents shifted to the Ds."

• "All good. Cruz at the top of the ticket helps the GOP in November. Entrenched GOP statewides are on notice to get back in touch. No chance of any Democrat getting any traction -- God is in his heaven and all is right with the world."