The Republican race for U.S. Senate drew allegations of voter manipulation today. Earlier in the day, the Ted Cruz campaign said they had heard from Cruz supporters who had received robo-calls directing them to vote tomorrow. Lt. Gov. David Dewhurst's campaign denied being involved in any dirty tricks. The Dallas Morning News has the details. 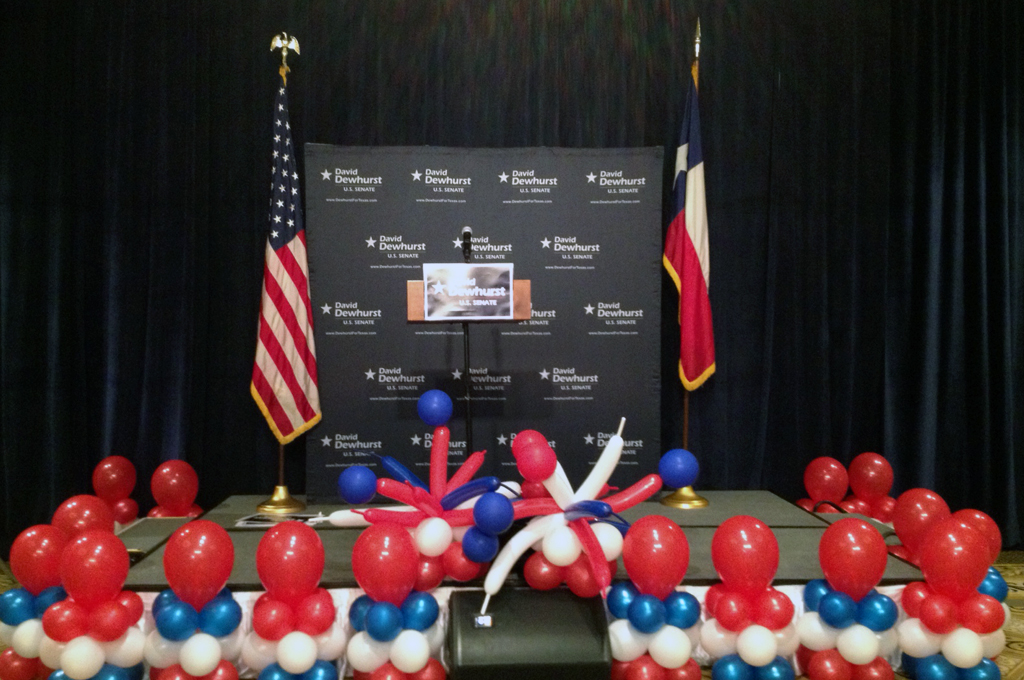 The scene at the David Dewhurst watch party in Houston, via photographer Eric Kayne.

After early voting, the Domingo Garcia and Marc Veasey race appears close. Garcia is ahead 70 percent to 30 percent in his home county of Dallas, those percentages are flipped in Veasey's Tarrant County. After early voting, Veasey is ahead of Garcia by several hundred votes.

The early vote for CD-27 shows Rose Meza Harrison ahead by four votes. She's up against Jerry Trevino, who beat her in the Democratic primary.

In Collin County, Republican Jeff Leach is leading Jon Cole, 53% to 46% for HD-67, according to early voting results.

Many Texas counties have posted their early vote results. In the Republican primary for U.S. Senate, Ted Cruz is ahead of Lt. Gov. David Dewhurst in Tarrant, Harris, Montgomery, and Fort Bend Counties. The two candidates split the early vote nearly in half in Dallas County.

In early returns from HD-114, Jason Villalba is ahead of Bill Keffer by about 10 percent — or about 460 votes. Keffer placed first in the district's Republican primary.

In the race for Supreme Court Place 4, John Devine is leading incumbent David Medina by 25,000 votes after early voting. But that's with just 1.5 percent of precincts counted.

In HD-40, the seat held by outgoing state Rep. Aaron Peña, R-Edinburg, Democrat Terry Canales is ahead of Agustin Hernandez Jr. with 57.2 percent of the Hidalgo County early vote. There is no GOP candidate - the winner of the runoff will represent that portion of the border county in the Texas House.

Randy Weber is ahead of Felicia Harris by over 20 percent in CD-14 after the early vote. They're vying for the Republican nomination to fill the seat U.S. Rep. Ron Paul is vacating.

The entire statewide early vote appears to be in for the US Senate race. On the Republican side, Ted Cruz led Lt. Gov. David Dewhurst 52.3 percent to 47.7 percent.  Among Democrats, former state Rep. Paul Sadler received 63.7 percent of the early vote while Grady Yarbrough drew 36.3 percent support.

Former Texas Secretary of State Roger Williams began the evening with a significant lead over Wes Riddle in early voting for CD-25.

In CD-15 small-business owner Dale Brueggemann is up on Navy veteran and investments manager Eddie Zamora with 59 percent after the early-vote count. The winner will face incumbent Democrat Rúben Hinojosa from Mercedes, who has held the office since 1997.

Railroad commission races: Christi Craddick is well ahead of Warren Chisum, with 60 percent of the first 392,000 votes counted; in the other contest, Barry Smitherman has 63 percent in his race with Greg Parker.

Ken King has an early lead on Rep. Jim Landtroop in the Panhandle's HD-88 race: He has 61 percent, with 13 percent of the precincts counted.

Cherokee and Nagodoches counties have their early voting results in for HD-11. Republican Travis Clardy is ahead of incumbent Chuck Hopson by 16 percentage points. Clardy finished just a few percentage points ahead of the former Democrat Hopson in the primary.

With partial early voting results in for CD-34, Filemon Vela leads Denise Saenz Blanchard 67.5% to 32.5% for the Democratic nomination while Jessica Puente Bradshaw leads Adela Garza 58.9% to 41.1% for the Republican nomination.

In CD-7, early voting shows Jim Cargas ahead of of Lissa Squiers. Squiers placed first in the Democratic primary.

After the early vote count in the HD-117 Democratic runoff, former San Antonio city council member Philip Cortez is ahead of attorney Tina Torres.  Philip has about 60 percent of the vote. The winner will face Republican incumbent John V. Garza, who was elected in 2010.

We're calling CD-14 for Randy Weber, who has about 65 percent of the vote. He'll face Democrat Nick Lampson in the fall.

Still waiting on the early voting results from a handful of smaller counties in HD-68. But Republican Drew Springer is leading Trent McKnight by 800 votes right now.

Very early voting totals have Ruben Cortez, Jr. ahead of Celeste Zepeda Sanchez in the race for SBOE District 2.

For the CD-34 Democratic nomination, we're calling Filemon Vela. The Republican nominee for the House position is in a runoff as well.

We have called the Democratic race for an open U.S. Senate seat for Paul Sadler. Sadler will face either Ted Cruz or Lt. Gov. David Dewhurst in November.

Thanh Tan provides this audio dispatch from Dewhurst's campaign watch party — it's the lieutenant governor's wife talking about what he'll do if he doesn't win tonight.

We are calling the Republican primary runoff for U.S. Senate for Ted Cruz.

We're calling CD-27 for Rose Meza Harrison, who has about 60 percent of the vote. She'll face Republican incumbent Blake Farenthold.

We have called SBOE District 12 for Geraldine "Tincy" Miller over Gail Spurlock, giving her a shot at reclaiming a seat on the board.

In HD-59, we're calling the race for J.D. Sheffield over incumbent Sid Miller.

Early results indicate that former congressman Ciro Rodriguez and Pete Gallego, a state representative from Alpine, are neck and neck in the CD- 23 race.

Several media outlets including the Texas Tribune have called the Republican primary for U.S. Senate for Ted Cruz. Lt. Gov. David Dewhurst has not yet conceded but U.S. Sen. John Cornyn, who did not endorse in the race, has officially congratulated Cruz.

From Cornyn's statement: “This has been a hard-fought and spirited primary battle and the people of Texas would have been fortunate to have any one of these well-qualified candidates as their next U.S. Senator. But I could not be more pleased with the nomination of Ted Cruz and I offer my warmest congratulations to Ted, his wife Heidi and their two daughters. He and his team ran a remarkable race and this is a well-deserved and well-earned victory."

We called the HD-88 race for Ken King, who's well ahead of Jim Landtroop with 86 percent of the votes counted. 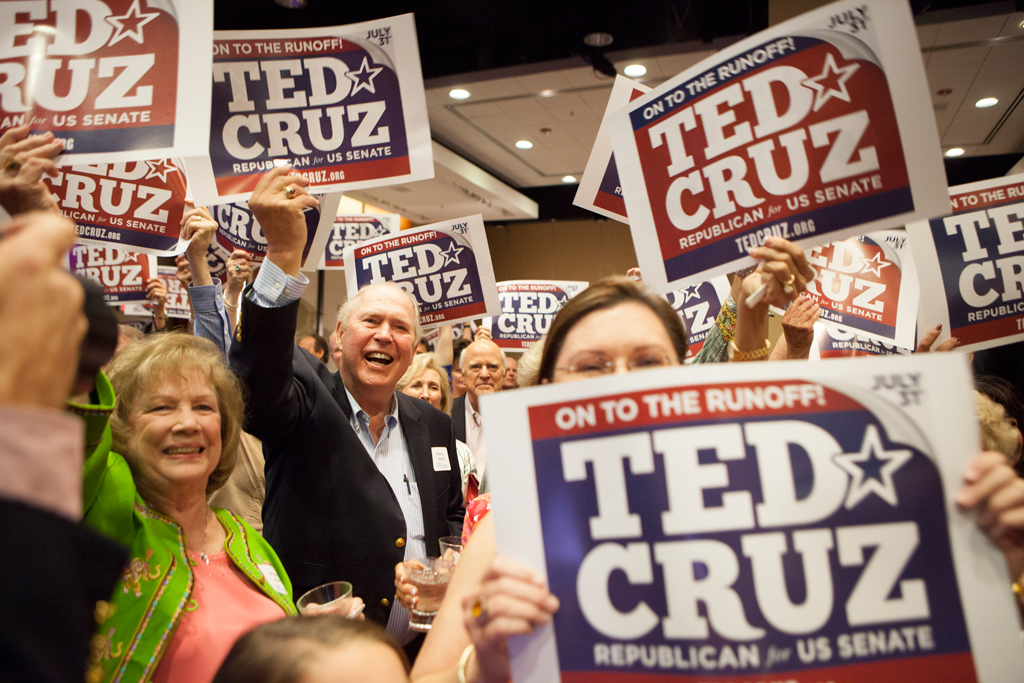 Supporters cheering at the Ted Cruz watch party in Houston.Photo by Michael Stravato.

In HD-117 former San Antonio city council member Philip Cortez looks like he’s won the runoff against attorney Tina Torres. With 94 percent of the precincts in, Cortez has about 57 percent of the vote to Torres’ 42.7 percent. If he holds on, Cortez will face Republican incumbent John V. Garza, who was elected in 2010.

In HD-12 GOP primary runoff, it's Kyle Kacal over Tucker Anderson in a squeaker: 51 to 49.

With between 50 and 60 percent of precincts reporting, Veasey is ahead of Garcia in CD-33 54 percent to 46 percent.

In CD-15 small-business owner Dale Brueggemann looks like he’s scored a victory over Navy veteran and investments manager Eddie Zamora. With 75 percent of the precincts in, Brueggemann has 58.1 percent of the vote to Zamora’s 42 percent. He will face incumbent Democrat Rúben Hinojosa from Mercedes, who has held the office since 1997.

The next round, already? Texas Land Commissioner Jerry Patterson: "I have great respect for Lt. Gov. Dewhurst. However, I'm running for LtGov in 2014."

Patterson lost the 1998 Republican primary for land commissioner to Dewhurst, but cut a trail followed, to some extent, by Ted Cruz in today's election: Dewhurst outspent him, but Patterson ran a grassroots campaign that made a close race of something that should never hav e been close.

We're calling HD-114 for Jason Villalba, who has 55 percent of the vote. He beat former state legislator Bill Keffer. 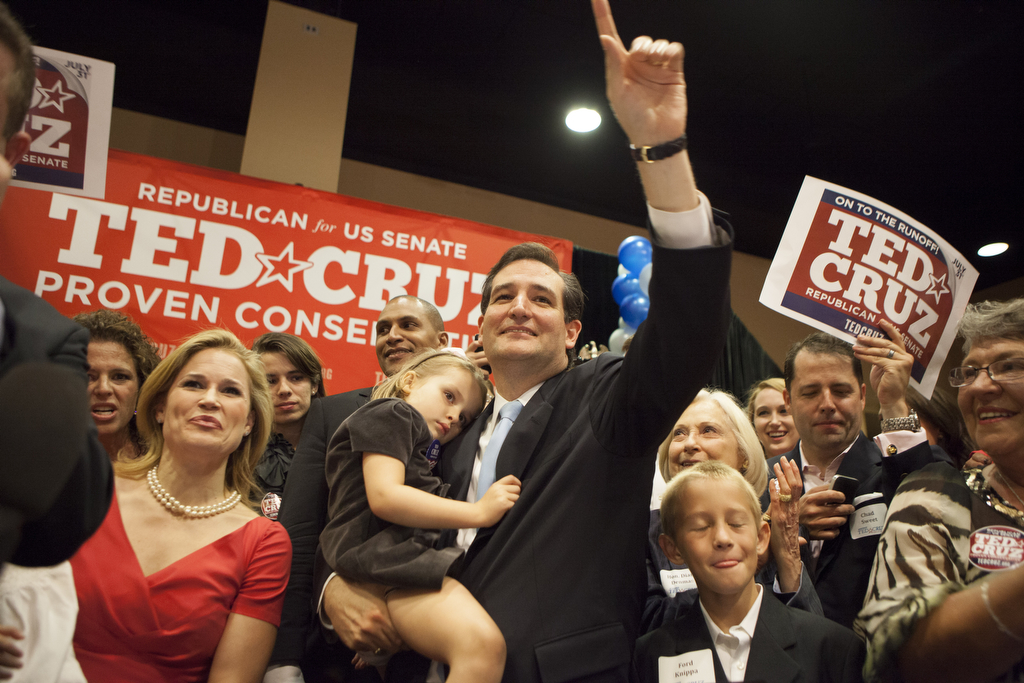 We're calling CD-7 for James Cargas, who's leading with about 80 percent of the district's precincts reporting.

Governor Rick Perry released a statement on the runoff:

"I congratulate Ted Cruz on a hard-fought victory and a well-executed campaign. Ted is a force to be reckoned with: an excellent candidate and a great conservative communicator. I call on all conservative Texans to rally behind Ted Cruz in November so we can remake the U.S. Senate in the image of Texas for the good of all Americans.

Lt. Gov. David Dewhurst fought a valiant fight. I’m proud to call David my friend. He and I will stand shoulder to shoulder once again in the spring, fighting for Texas -- the most conservative state in America.

Texas is as rock-hard conservative as ever. Texans in true Texas fashion decided what is right for Texas. It is my expectation and prayer that their choice will be right for America."

With all precincnts reporting, Tom Maynard narrowly defeated Rebecca Osborne with 50.6 percent of the vote in the SBOE District 10 race.

Trent McKnight has called Drew Springer to concede in HD-68. We're calling it for Springer. They're still hand counting ballots in some precincts, including Springer's hometown of Muenster. 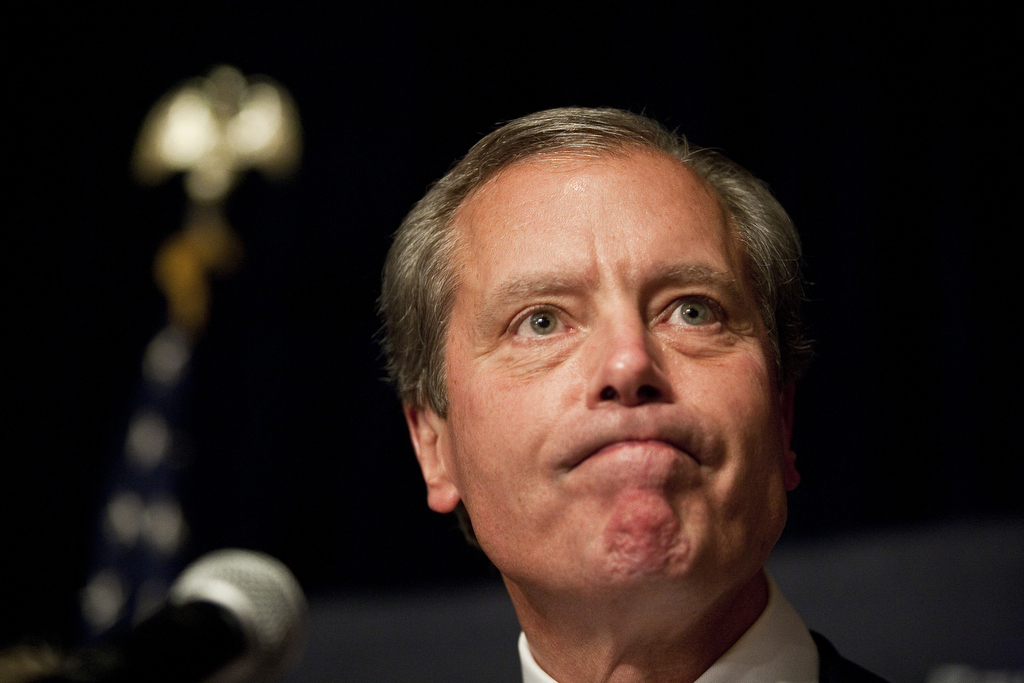 Texas Lieutenant Governor David Dewhurst addresses the attendants at the David Dewhurst watch party following the announcement that he lost to Ted Cruz, July 31, 2012 in Houston, TX at the Omni Hotel. Photo by Eric Kayne