The insiders continue to work their way through the runoff ballots this week, looking at a couple of Democratic and a couple of Republican races for Congress.

If their hunches and guesses are right, the winners on this list of candidates will be Randy Weber, Ciro Rodriguez, Roger Williams, and Marc Veasey.

Most just made their picks and moved on, but some left comments about the races and the players, and those follow below.

Who do you think would win a CD-14 runoff held today?

• "Endorsed by Ron Paul will carry the day!"

• "Ron Paul's blessing will go a long way in that district."

• "Weber today, but if Harris can raise some $$ she may have a chance."

• "Randy Weber's future is so bright he has to wear shades." 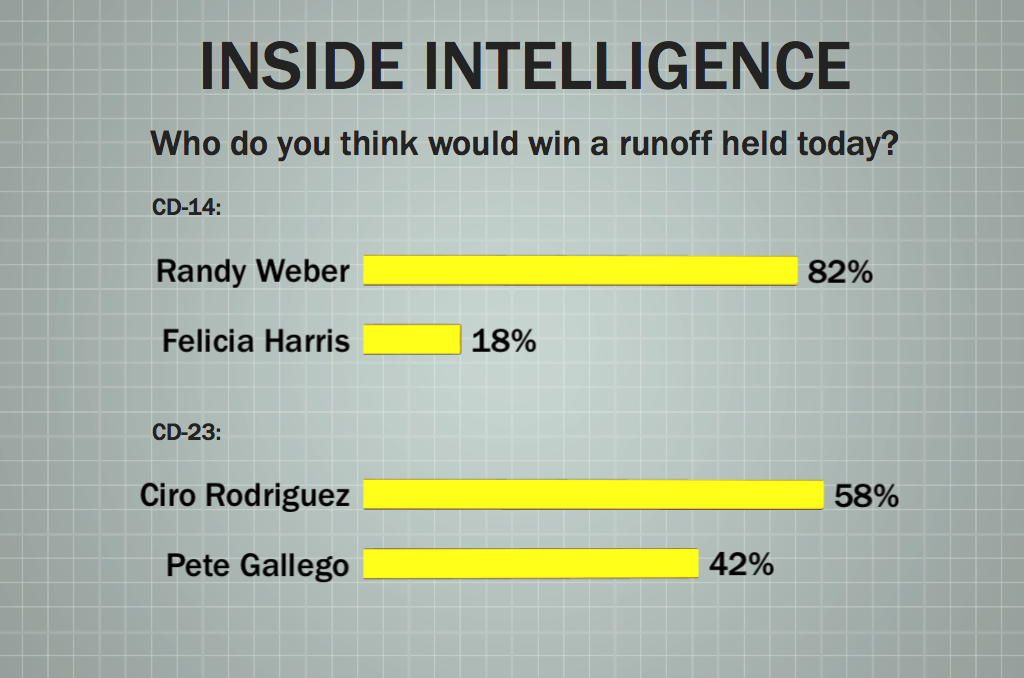 Who do you think would win a CD-23 runoff held today?

• "Appears to be an SA driven district."

• "San Antonio turnout, whatever it will be, will trump all the cacti in West Texas."

• "The primary result and recent events reveal the Gallego has a lot of work to do, but with the right resources and focus, he can still win."

• "Gallego has the campaign talent to get across the finish line."

• "Counties where Ciro ran well all have multiple runoffs. It won't be close."

Who do you think would win a CD-25 runoff held today?

• "Roger finally gets his due."

• "In a low turnout runoff in the middle of July, Ron Paul supporters will once again show their strength."

• "Williams has this one all but sewn up."

• "Roger spent a ton of money to get to his top #, tea party will carry the day for Riddle" 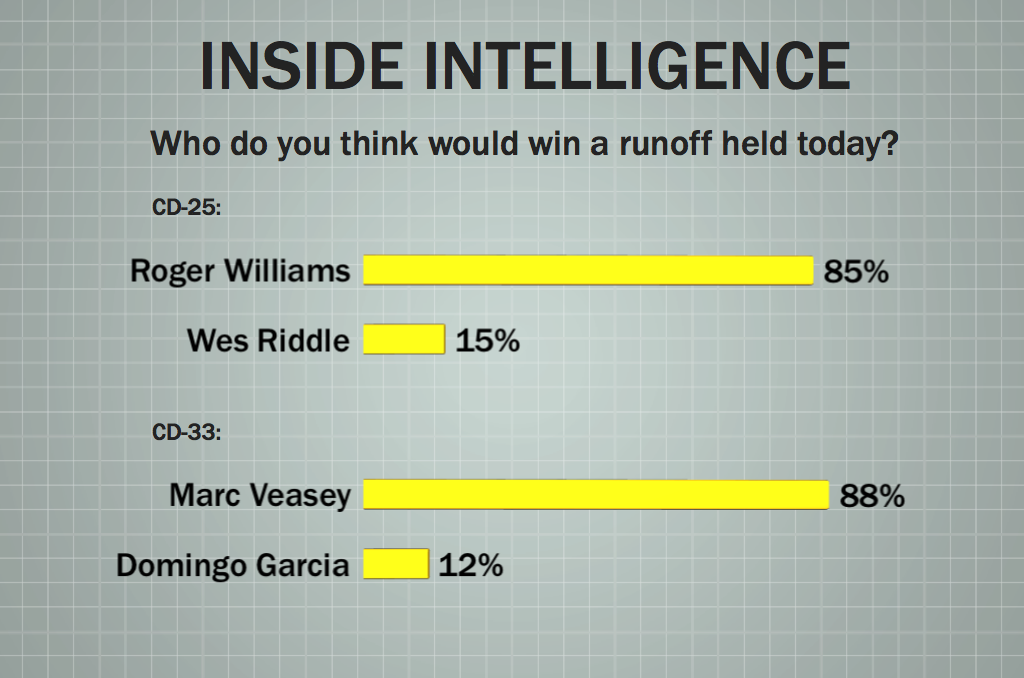 Who do you think would win a CD-33 runoff held today?

• "Latino Democrats will no longer have an axe to gripe about not having a Latino Congressional seat in both Houston and Dallas. The outcome in this race will clearly articulate that there are NO Latino leaders left in the Democratic Party. They whine about low turnout within the "sleeping giant," but the fact is that they are not sleep. They just don't care about what is being offered."

• "40% of billboards in DFW area have Domingo's picture. Too much name ID"

• "Dallas already voted Garcia out once."

• "As best I can tell, Veasey has the momentum."

• "By his own admission, Domingo is far more effective out of office. He is singularly responsible for the President's deportation executive order, after all."

• "Does it matter. I think they are the same person"

• "Veasey's Republican primary vote will harm him. Obama's ruling on the DREAM Act may provide the boost in Latino turnout Garcia desperately needs."