As the fight between Texas and Planned Parenthood continues this week in the 5th U.S. Circuit Court of Appeals, public opinion of the reproductive health organization and abortion provider remains fiercely split along partisan lines, according to a recent University of Texas/Texas Tribune poll.

The May poll, which honed in on political preferences but touched on several policy issues, also showed favorability splits for Planned Parenthood based on race and gender.

On April 11, Planned Parenthood clinics filed a lawsuit against the state for excluding them from the Women's Health Program — a move that could affect nearly half of the more than 100,000 clients who are actively seeking care under the program. That case will be heard this fall.

In the meantime, the judge in that district case has issued a preliminary injunction, ordering the state to keep Planned Parenthood in the program. The clinics involved in the suit do not perform abortions.

The state has appealed that decision to the 5th U.S. Circuit Court, which will hear oral arguments from both sides on Thursday.

Attorney General Greg Abbott has staunchly argued that the state should have the right to choose its own providers of subsidized health services.

Poll co-director Jim Henson, who teaches government at UT, said that the survey, which asked respondents about political races as well as social and economic issues, included several questions about Planned Parenthood because of the growing dialogue on women’s health.

“Planned Parenthood has clearly become the vehicle for talking about abortion, but that discussion has had real implications for health care,” he said.

The survey found that favorability ratings for Planned Parenthood correlated with respondents' beliefs about how much of the organization's total services are related to abortion. When respondents thought a higher percentage of Planned Parenthood services were dedicated to abortion services, the organization's unfavorability ratings tended to increase.

Meanwhile, 55 percent of those who believe that less than a quarter of the organization's business is abortion-related gave it “very favorable” ratings. Planned Parenthood has publicly stated that about 3 percent of its services have to do with terminations. “Virtually nobody went that low. Everybody overestimated what the number is,” Henson said.

Weeks way from the state’s July 31 runoff election, Henson says abortion is not the top issue on voters’ minds but that it is “important to narrow groups of people.” While it can be a wedge issue for either side, Henson said it’s more likely to be an issue in the Republican primary, and less likely during the general election.

Henson says this section of the latest UT/TT poll offers a glimpse into public opinion of Planned Parenthood, the organization that has become the main target of the anti-abortion movement.

Here’s a look at Planned Parenthood’s favorability with certain groups, based on the poll, along with some analysis on where its base of support is and how much perception of its abortion work hurts its reputation among self-described conservatives. 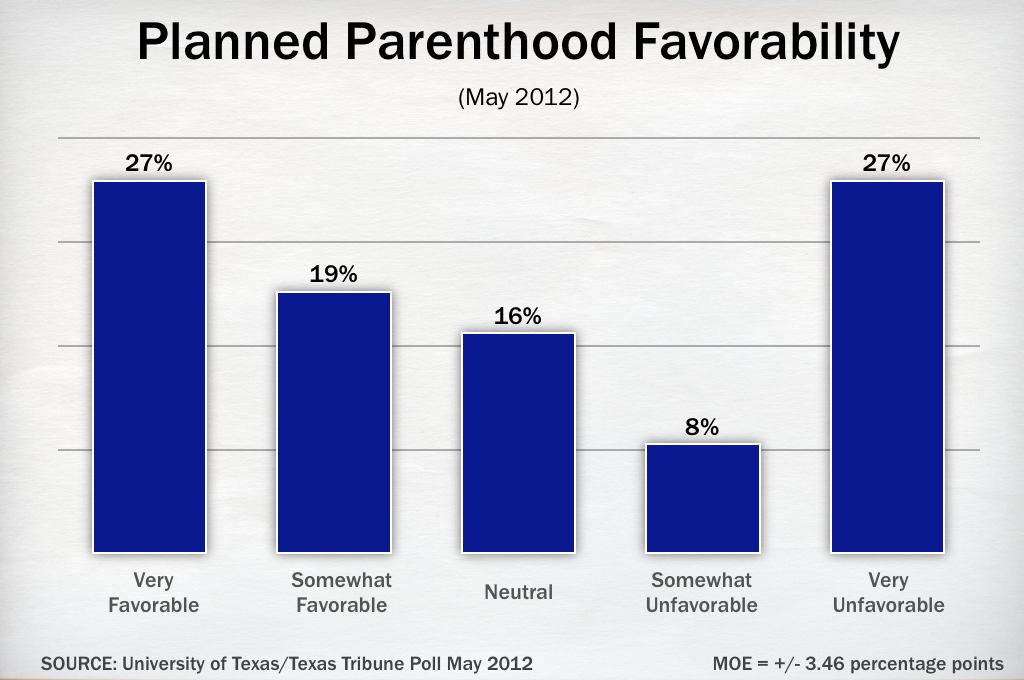 Favorability by party affiliation: In what can hardly be seen as a surprise, Democrats heavily favor Planned Parenthood compared with Republicans. Among independent voters, there is some ambiguity — 42 percent favor the organization; 36 percent are unfavorable. “You get a pretty good idea of why a Republican majority is pushing Planned Parenthood so hard,” Henson said. “This is an area where a Republican officeholder being critical of Planned Parenthood is going to see a lot of support among their base and in particular the primary voter base.” 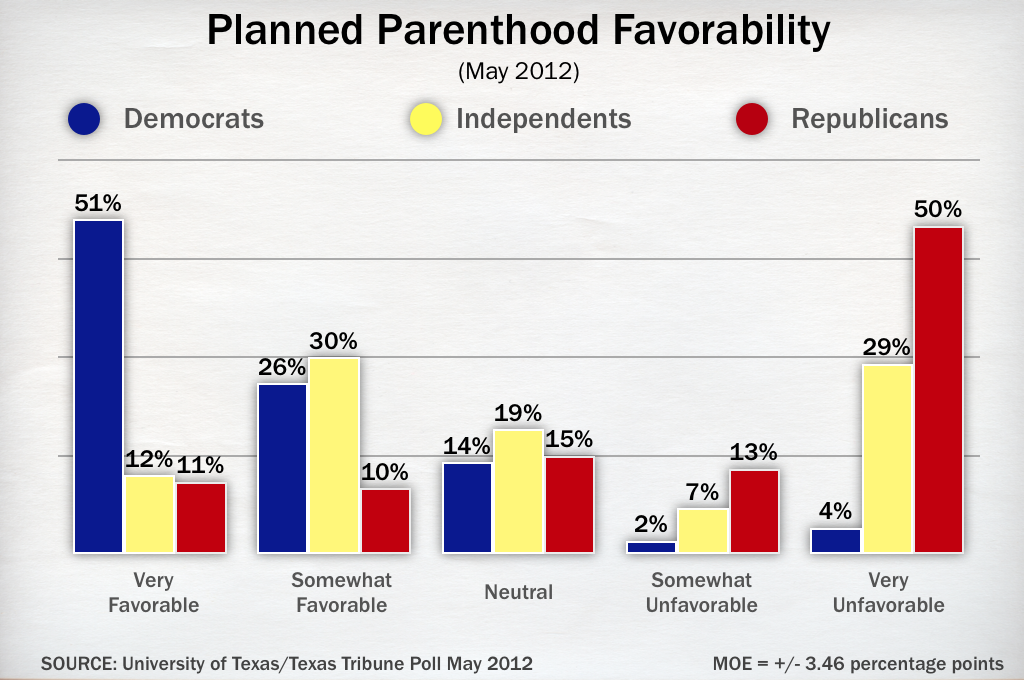 Favorability by political ideology: Again, we see that respondents who identify as liberal were more favorable to Planned Parenthood, while those who hold conservative views were more likely to be unfavorable. However, the politically moderate respondents — who could include members of both major parties — aligned more with liberals. Henson’s take: “It’s much more one-sided among Democrats, but there are many more Republicans in the state, and they have so much more leverage” to change policies. 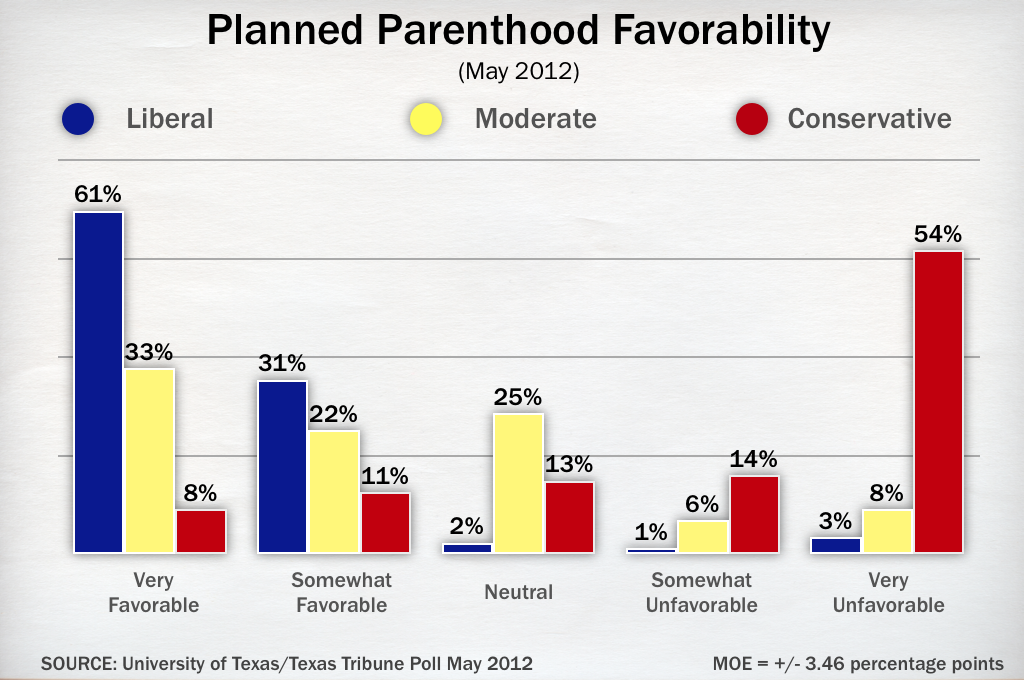 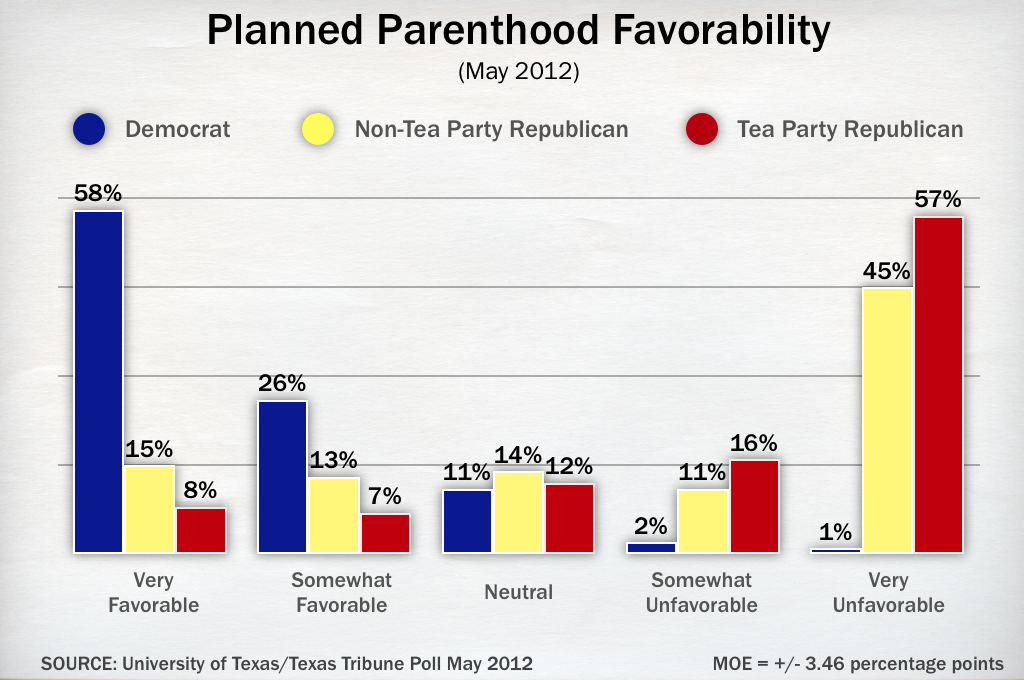 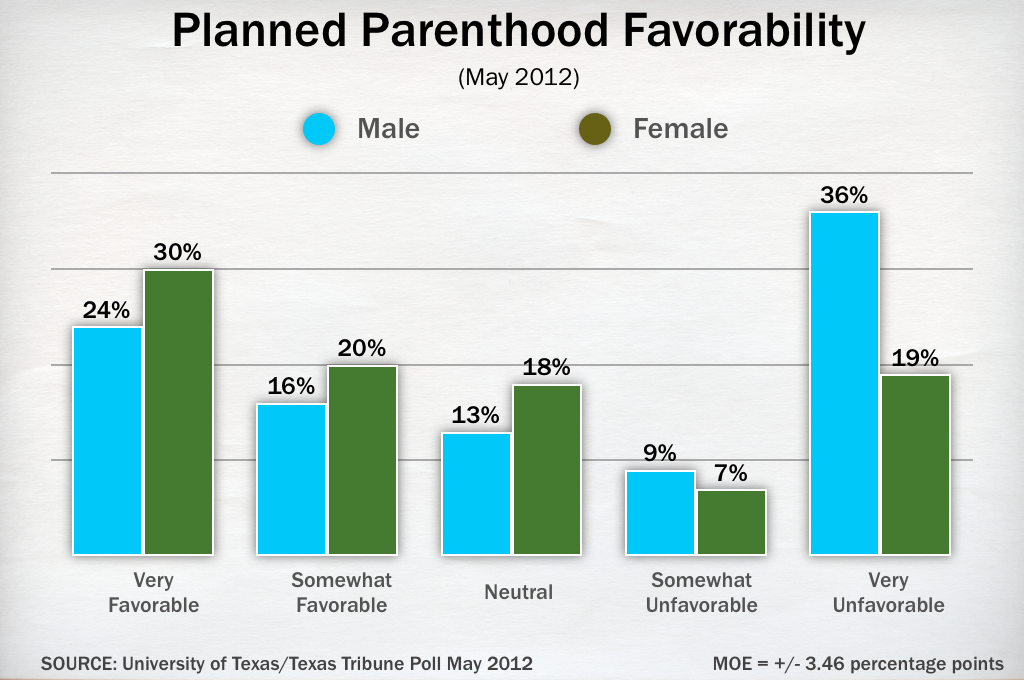 Favorability by race: This graph looks at how white, African-American and Hispanic respondents view Planned Parenthood. It’s an indication that minorities hold positive views of their clinics. “They have a very high favorable from people who go and are probably more familiar with them as a health care provider rather than a political issue,” Henson said. 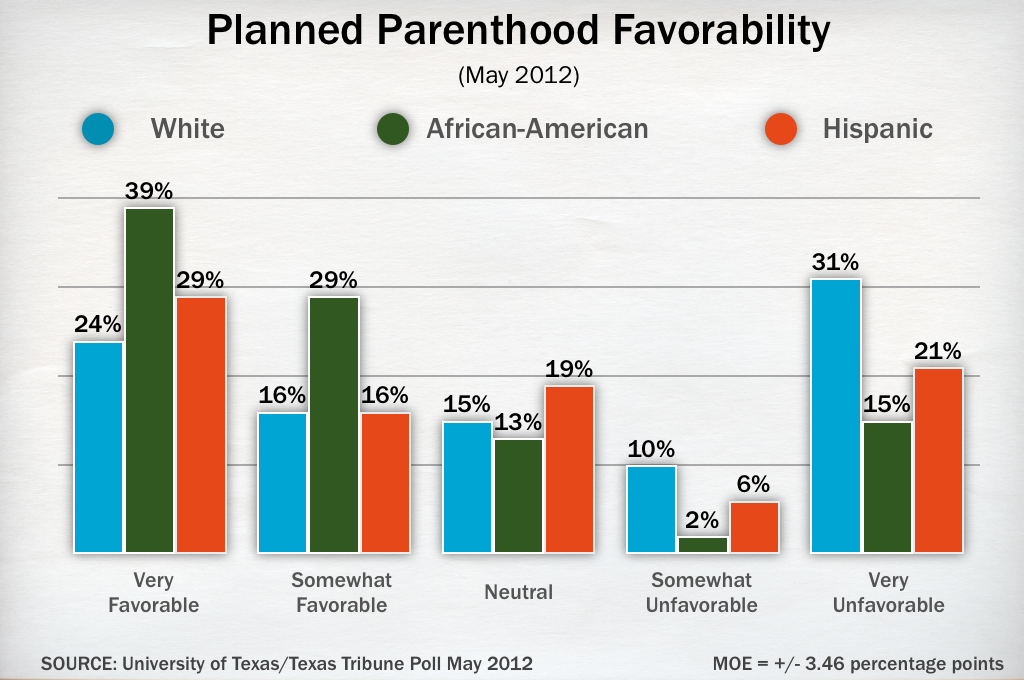 Enlarge
The UT/TT internet survey of 800 self-declared registered Texas voters was conducted May 7-13 and has a margin of error of +/- 3.46 percentage points. The numbers in the charts might not add exactly to 100 percent, because of rounding. And "likely voters" were defined as those who indicated they were "somewhat" or "extremely" interested in politics and who voted in "every" or "almost every" election in recent years.