For the second week, we lifted questions from the University of Texas/Texas Tribune Poll and asked them of the insiders, and we'll come back around with a comparison of the insiders' answers and those of likely Texas voters.

The insiders split on the federal health care law that's pending before the U.S. Supreme Court, with 40 percent saying the court should uphold it and 37 percent saying the judges should overturn the whole thing. Another 19 percent said the individual mandates in that law should be declared unconstitutional with the rest left in place.

Most — 56 percent — said the legal arguments, rather than politics and partisanship, will sway the judges on that law.

More than half of the insiders say health insurers should be required to cover women's birth control. An overwhelming majority — 86 percent — think candidates should avoid signing anti-tax pledges before they're in office and know what the state's finances look like.

As always, we've attached a full set of the verbatim comments on our questions. Here's a sampling: 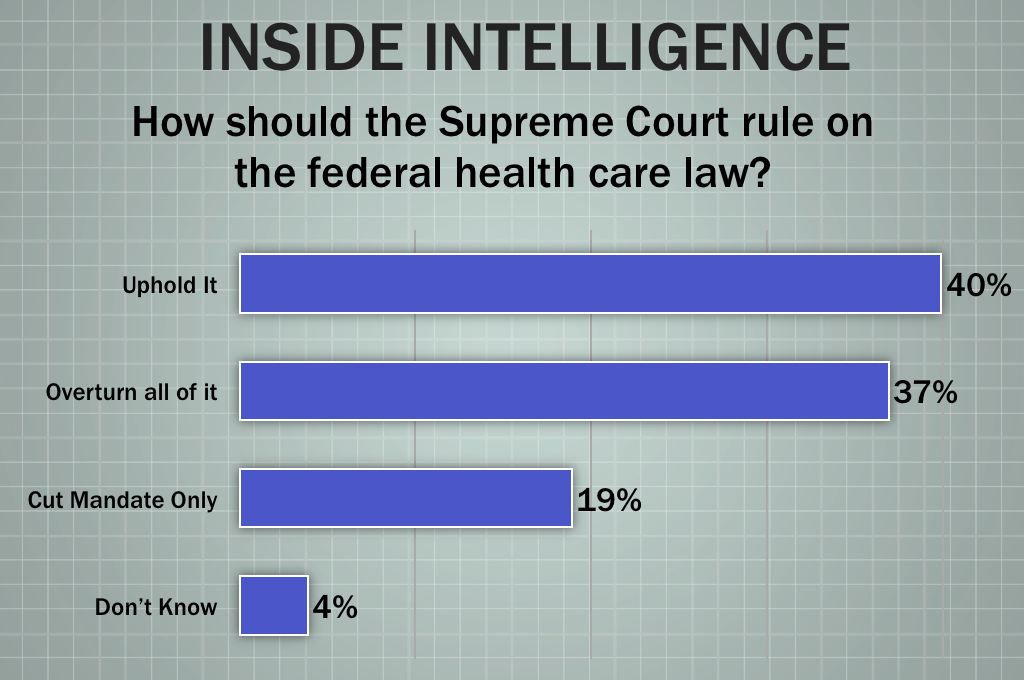 Recently the U.S. Supreme Court heard arguments on the constitutionality of the new health care law, which is called the 2010 Affordable Care Act. What do you think the Supreme Court SHOULD do?

• "The Supreme Court should follow their best interpretation of the U.S. Constitution. Likely that would be to rule the individual mandate is unconstitutional."

• "Seems like it was a big bite on this bill, but I am not an attorney and did not stay at a Holiday Inn Express last night either."

• "The one good part of the law, requiring people to get insurance, is the one illegal part. The rest is just welfare, which is legal."

• "The act is not artful, but it is constitutional. The opponents' arguments are based on partisan politics, not sound legal positions."

• "The mandate was a constitutional 'bridge too far,' but the rest of the law depended on it, and Congress would not have passed it without the mandate, so if the Court 86s the mandate, it needs to do the Full Monty and let Congress start over [if at all]."

• "They'll keep the 'good stuff' and ditch the mandate." 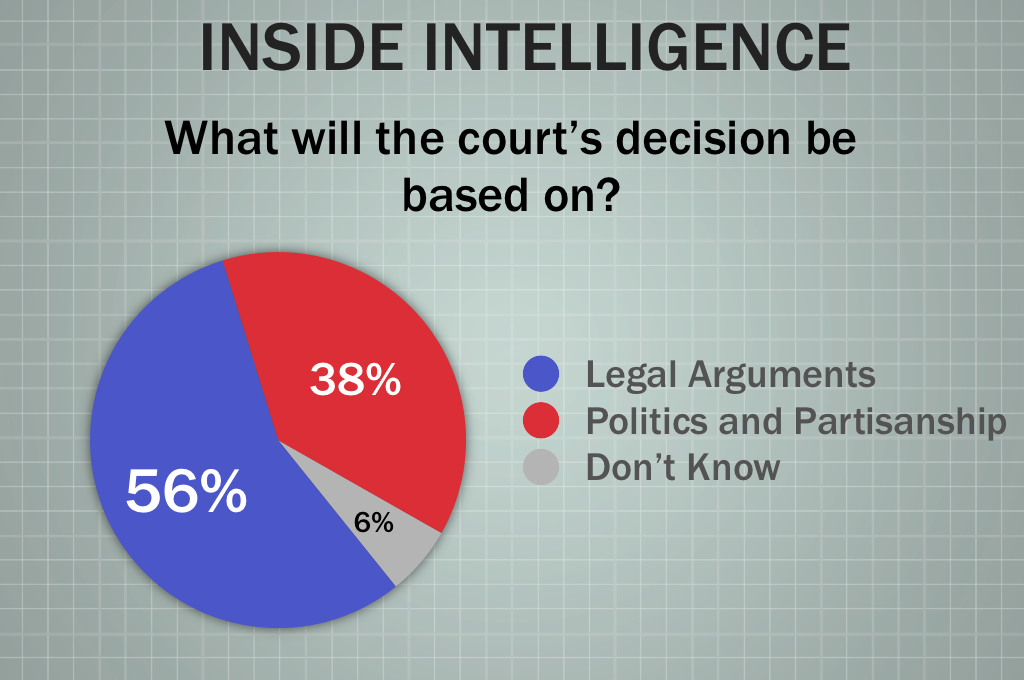 • "I've worked for the courts. Judges, especially Republican judges, are scrupulously nonpolitical when it comes to deciding cases. The one exception I've seen was the Texas Supreme Court in the early 1990s, when 60 Minutes exposed corruption by Democrats."

• "The Roberts Court has proven itself to be activist and corporatist."

• "They will twist the law to the outcome they seek — if they strike the law down. If they uphold it, it will be because they followed well-established precedent and did not cave to public sentiment."

• "This question is exceptionally cynical and offensive. I do not think this Supreme Court or any Supreme Court of the past makes political decisions. I will concede that the Bush/Gore decision can be criticized as such, but that case was historically unique."

• "SCOTUS is smart enough to mask politics and partisanship under sound, legal arguments."

• "The question improperly assumes all justices act with the same motivation. This case comes down to one justice, Kennedy, who will decide on the law."

• "This court's legal reasoning dovetails with the political views of those who appointed them. No way to separate the two."

• "It'll be based on the legal arguments, but it'll be split along the conservative/liberal voting blocks. As usual, Kennedy will be the deciding vote." 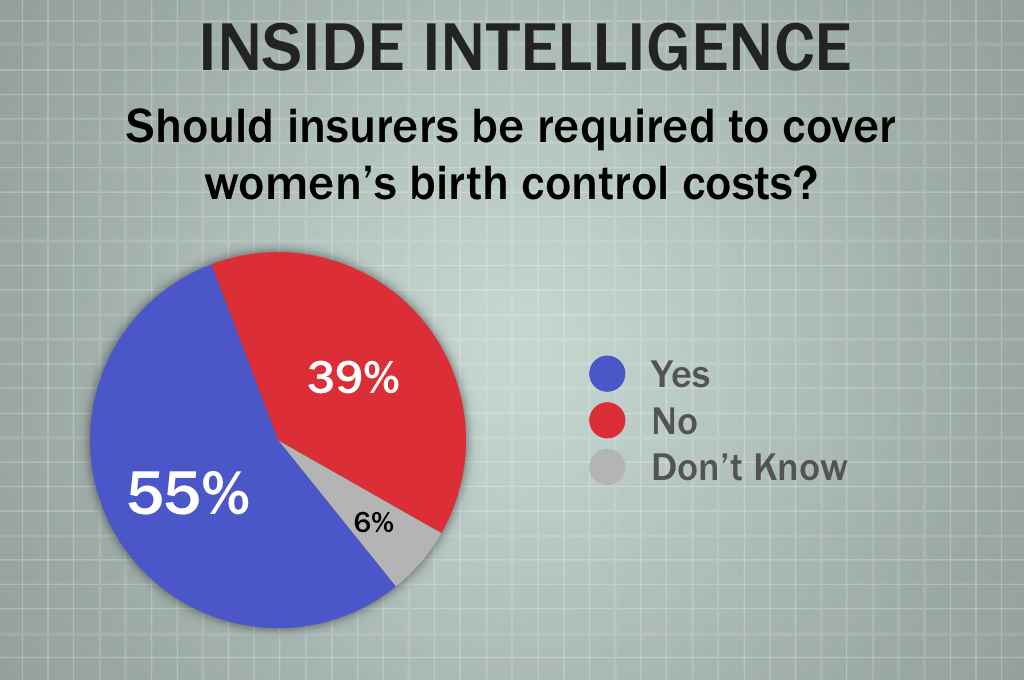 Do you think health insurance companies should be required to cover the full cost of birth control for women?

• "If we would only make birth control an 'across the counter' option for women 18 years and older, this wouldn't be the issue it is."

• "Small costs to avoid so many more unwanted children. ... To that point, the state should probably provide them."

• "Birth control is a lifestyle issue, not a health issue. No one should be forced to pay for someone else's lifestyle choice."

• "Birth control is preventive medicine. The American Taliban will have to come to terms with modernity, namely, the fact that women are more than breeding stock."

• "I oppose all mandates. Mandates are bad."

• "This is simply not debatable. We cannot afford a health care system where birth control is not covered. It is the number one cost-saver in the system."

• "Of course not. If insurers want to, then they can offer it — but it should not be mandatory. The fact that the question is even on the table shows how craven politics has become, with one party now promising cost-free, consequence-free sex in order to troll for votes." 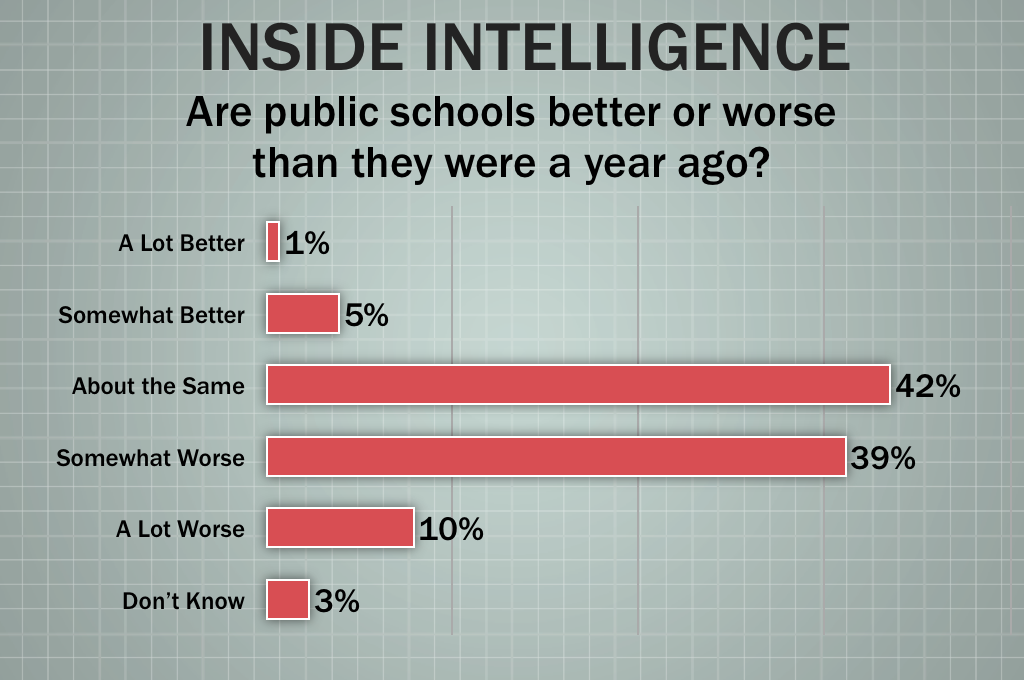 Compared with a year ago, would you say that K-12 public school education in Texas is a lot better, somewhat better, about the same, somewhat worse or a lot worse?

• "I have no children in Texas schools, but my sense is if $4B is abruptly removed from districts' budgets, something has to give and it probably isn't school lunches or bus drivers."

• "Last I saw, a growing number of Texas kids entering Texas colleges and universities need remedial classes to get up to speed. That's not a good sign of improvement in quality and preparedness."

• "Many children will succeed despite the cuts in education funding. Those on the margin, however, will be more likely to fail than succeed."

• "Texas ranked 45th on per-capita education spending and then cut $4b."

• "There are districts and schools that are making gains. But there are others that are lagging. State leadership needs to pick up the pace, and educrats need to stop moaning about accountability and rise to the occasion." 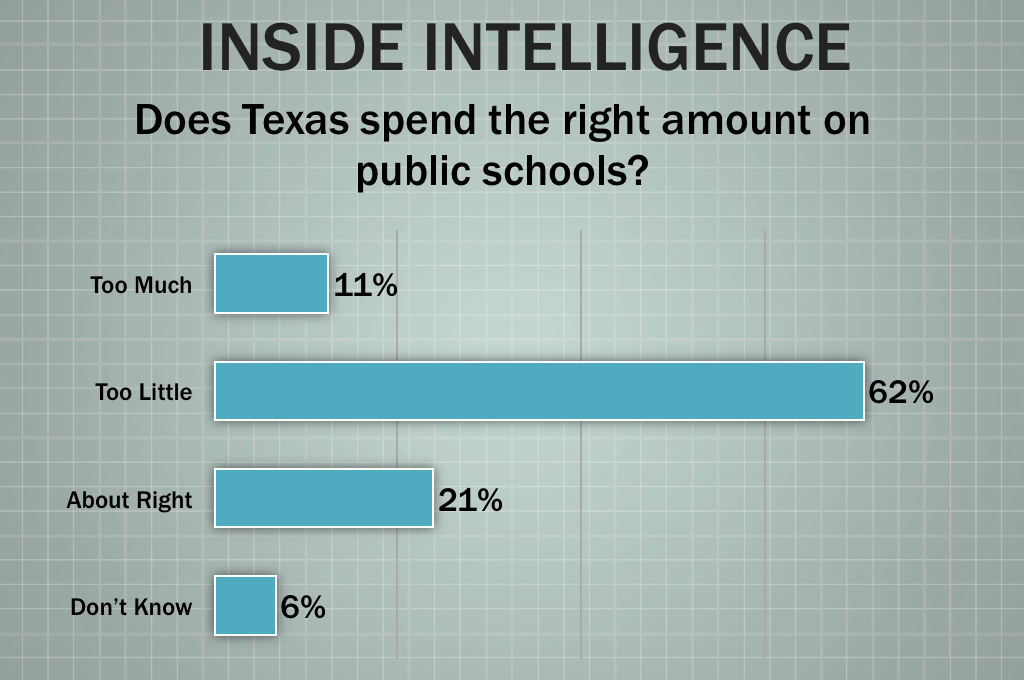 Do you think that Texas spends too much, too little or about the right amount on primary and secondary education?

• "It really has never met what national school standards suggest, on a per-child basis, including an annual formula to account for rising school pops."

• "About one-fifth of the population of Texas attend our public schools. If we don't fund our schools properly, and make sure children have good instruction and good instructors, our 'Texas miracle' of economic growth will cease."

• "But a lot is wasted that in theory could be reallocated to offset —but still more investment in our kids, and their teachers, period."

• "We spend way too much for the results we are getting."

• "Our demographics are shifting, and the world is about to pass us by."

• "Trick question. How do we know what 'the right amount' is? We give school districts money. They spend it. Get varying results. But never any real study on how they spent it and what really works."

• "Texas public school funding is lower than the national averages for both spending per student and teacher salaries. However, expenditures alone would not seem to account for the anemic quality of the educational improvement, leaving far too many children with inadequate training to prepare them for economic success in our increasingly complex world."

• "Are you kidding? This state couldn't squeeze more blood from a stone with the biggest industrial compressor in the world. The public schools have their flaws, but there's only so much you can do when you are being starved."

• "There's a pot load of waste and admin costs in each system, but the underfund on Higher Ed, especially, is not consistent with our stated desire to be the jobs magnet for the rest of the country." 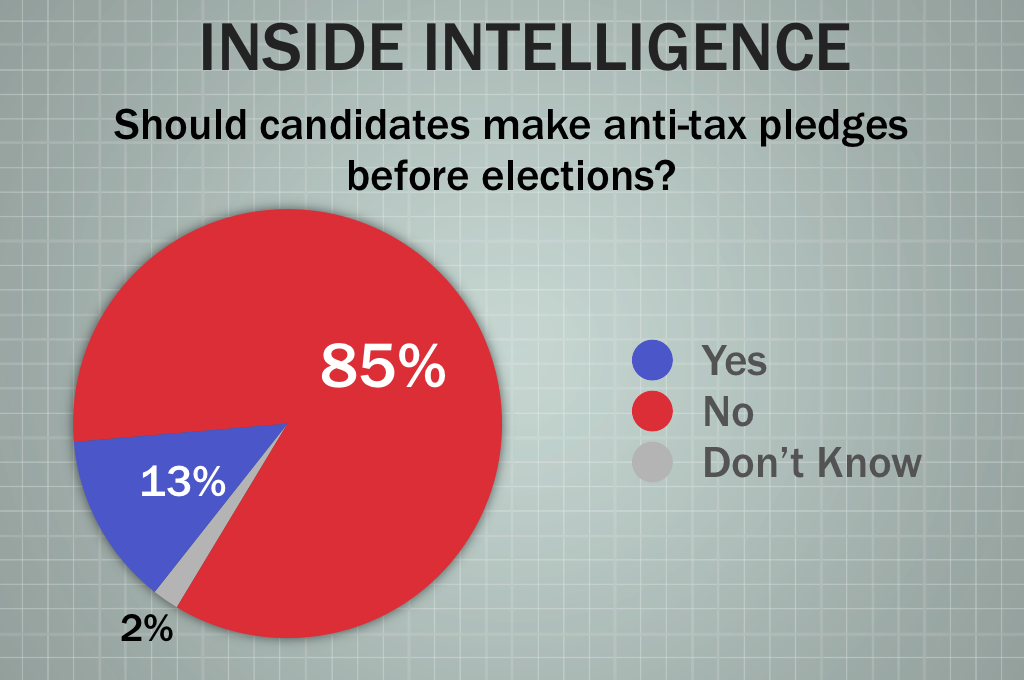 As you may know, Texas legislative candidates have recently been invited to pledge NOT to increase taxes when the Legislature convenes in January 2013. Some people say that legislative candidates should pledge not to increase taxes before the primary elections so that voters know where they stand on taxes. Others say that anti-tax pledges lock candidates into inflexible positions before the fiscal situation in January 2013 is clear. Which of these positions is closer to yours?

• "We can always continue borrowing and ignoring all of the major issues: water, highways, education and health care. ... Our democracy will not survive without an educated people."

• "Few candidates and only slightly more incumbents have a clear understanding of emerging fiscal conditions. Most legislators are predictably surprised at the increased costs of essential services and go through a denial phase each session."

• "The only pledge a candidate should make is to represent the district's interests to the best of his/her capabilities."

• "Cut the size of government and reduce regulations, that's how to improve the economy, which will in turn increase government revenues. NO NEW TAXES!"

• "What candidates should pledge to do is be good stewards of taxpayer dollars. And the way they show that is by rigorous oversight during the entire two-year cycle, not just the session. The LBB should meet regularly [and include the nonmember appropriators] to provide this oversight."

• "Candidates and elected officials should not sign politically motivated pledges but instead concentrate on good public policy — which in Texas at the moment is a very bad joke and terribly irresponsible."

• "Stick to the Pledge of Allegiance, the rest is BS."