We asked the insiders some of the same questions we asked likely voters in the latest University of Texas/Texas Tribune poll and, like the voters, they think the economy is the biggest problem facing the country. But where voters clustered a list of issues at the top of their state concerns, education and water were clearly ahead of everything else on the insiders' list.

On the national list, the insiders started with the economy, then followed with federal spending/national debt, partisan gridlock, and unemployment/jobs. With the exception of gridlock, that's the same list voters turned in.

At the state level, 30 percent of the insiders put education on top — dwarfing everything else — followed by water supply, political corruption/leadership, state budget cuts, and the economy. For voters, six issues were at the top, and in a virtual tie: immigration, the economy, unemployment/jobs, border security, education and political leadership.

The insiders think both the country (61 percent) and the state (53 percent) are going in the wrong direction. And a majority (51 percent) said the national economy is "a lot worse off" than it was a year ago. Only 6 percent said it was better. Their own personal and family economics, according to 52 percent, were about the same as a year ago; 38 percent said their personal outlook is better than it was last May.

The full set of comments from the insiders is attached. Some excerpts follow: 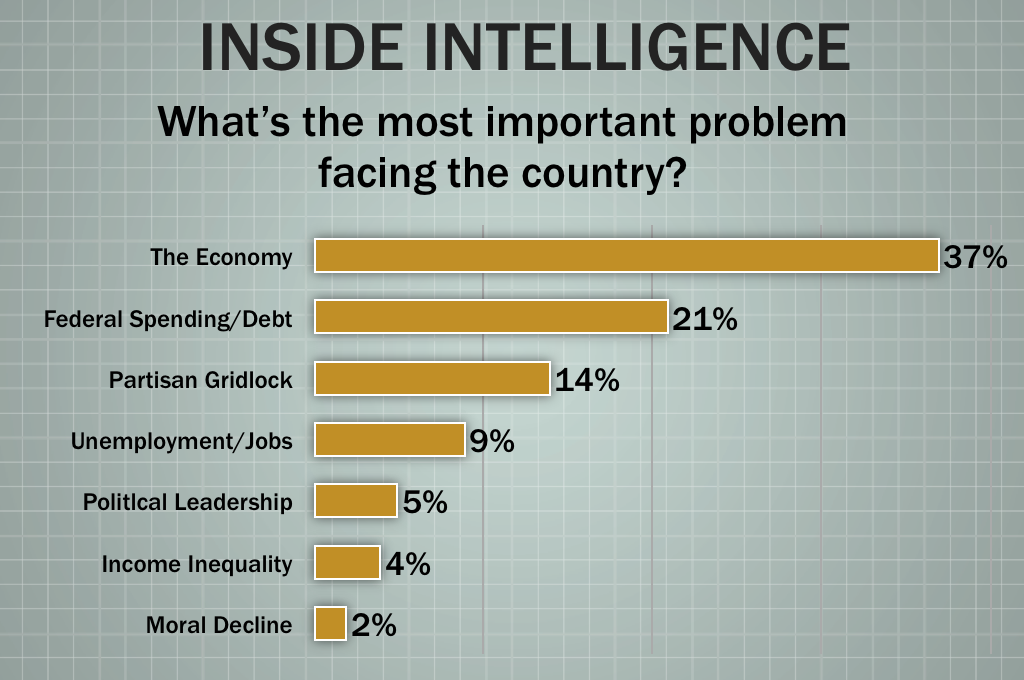 • "The U.S. became great through rugged individualism.  We are losing that competitive advantage due to growth of government, social spending, smothering European-style "taking care" of everyone."

• "Can't solve any problems unless you have an environment in which you can solve problems."

• "It's always about the economy, stupid!"

• "Until we fix the "legal corruption" then we can't fix any of these other problems.  Money and self interests control the entire process"

• "Rome's moral fiber fell apart and as the say goes, the rest is history"

• "The hollowing out of the American middle class is the single most important issue facing the body politic today. Global corporate and governmental forces have combined to bring this about. There will be a reckoning."

• "Horrible leadership with a divided citizenry"

• "The economy is the key.  A growing economy fixes income inequality, unemployment, taxes, social welfare, federal spending... you name it." 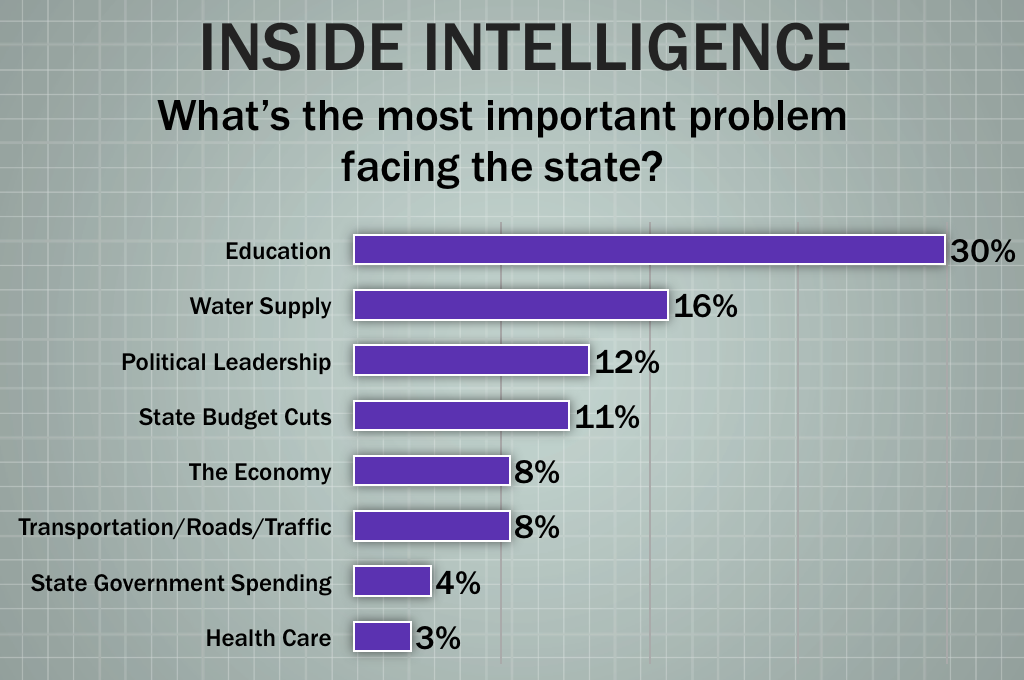 • "Texas has become a semi-corrupt one-party state.  Until we get some forward-thinking leadership, we are digging a huge hole for future generations."

• "Education is the problem and the answer. As long as it doesn't work, it is the core of the long-term problem. Once it is addressed, the rest of the world begins to fall into place."

• "Water wars will make everything else pale by comparison."

• "The public education issue is a ticking time bomb that threatens Texas' future well-being. With at least 40% of Texas kids not completing high school, we risk creating a giant underclass that will be reliant on public services."

• "We are in a water crisis we have not been willing to recognize yet. The economic consequences of running short on water will be huge if it happens."

• "Transportation, education and water are right up there where again we need strong leadership willing to attack problems with creative solutions rather than political sound bites."

• "Water and education are the most important long-term issues. We won't have a state without water and educated workers. Transportation is an essential short-term issue for the economy."

• "The economy is the key issue.  Without a vibrant economy, we can't tackle issues like water or transportation, which will both start to strangle the state at some point." 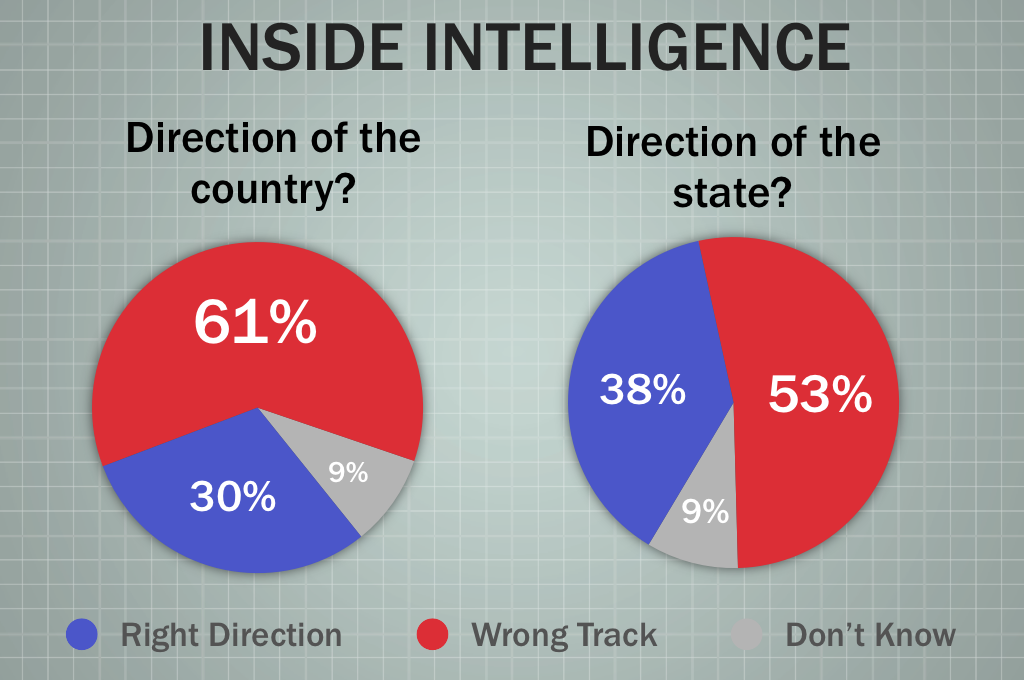 • "Economically, we're on the same path as Greece, Spain, France, Italy, et al. and it's not in the right direction.  Something's gotta give in our country:  entitlement and spending reform or massive tax increases, laid against the backdrop of a stagnant economy with historic unemployment numbers."

• "The economy is growing fitfully, but it is growing. Europe would give anything to be in our shoes."

• "I didn't realize the country was moving in any direction. We seem to be at a dead stop."

• "Federal leadership is a joke."

• "Recovery is too slow but the direction is right."

• "We are slowly extracting ourselves from foreign misadventures and man-made economic catastrophes. However, an obstructionist and bought Congress is retarding progress."

• "Generally we're holding to our small government philosophy, but the danger is in overdoing it, failing to plan for future growth in water, roads, etc."

• "We are still dealing with the same big issues as 15 years ago. Why? Bad leadership and bad decisions."

• "State lawmakers think borrowing money is ok and the way to prosperity.... pay-as-you-go government died with the Perry administration.  No water, highway, education, or health solutions."

• "Is treading water a direction?"

• "Compare the state's infrastructure in 2012 to 2002. Education system, Transportation system, water resources, most uninsured in the nation - all declining." 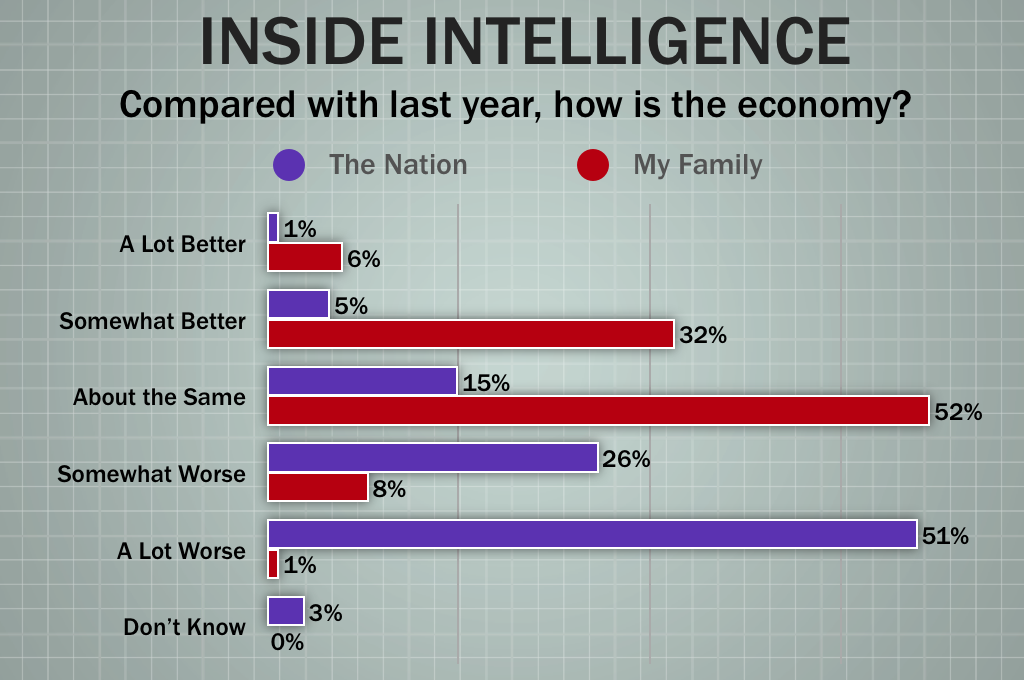 • "Actual economic and job growth is anemic, and we've run up additional unbelievable that will have serious consequences down the road.  Texas, especially Austin, is doing relatively well."

• "We have come back from the brink of disaster."

• "Continued prolonged stagnation, except in energy producing states, coupled with masking of the true number of unemployed while borrowing of 41 cents of every dollar spent is a downward trend no matter how much lipstick you put on the pig!"

• "The world economy is in the crapper and we are headed there - nothing we can do about it...we will have the same demonstrations on austerity programs that they are having in Europe..."

• "Fewer dollars for discretionary spending means I'm somewhat worse off.  Still, I realize I'm in decent shape and have no room to complain.  I wish others would cowboy up, too."

• "ObamaCare is killing the medical professionals. The brightest and best will no longer sacrifice if there is little or no economic reward."