Tax pledges don't appeal to everyone, but they appeal strongly to the most conservative Texans, according to the latest University of Texas/Texas Tribune poll.

"This gives us very clear insight into where the politics meets the policy," said poll co-director Jim Henson, who teaches government at the University of Texas at Austin and runs the Texas Politics Project. "This is where the votes are."

Henson said the issue appeals most to the more energetic part of the Republican Party — the Tea Partiers and the ideological conservatives — that is in charge of the party that's running the state. "This is the place to go for a Republican political entrepreneur," he said. "There's a big intersection here." 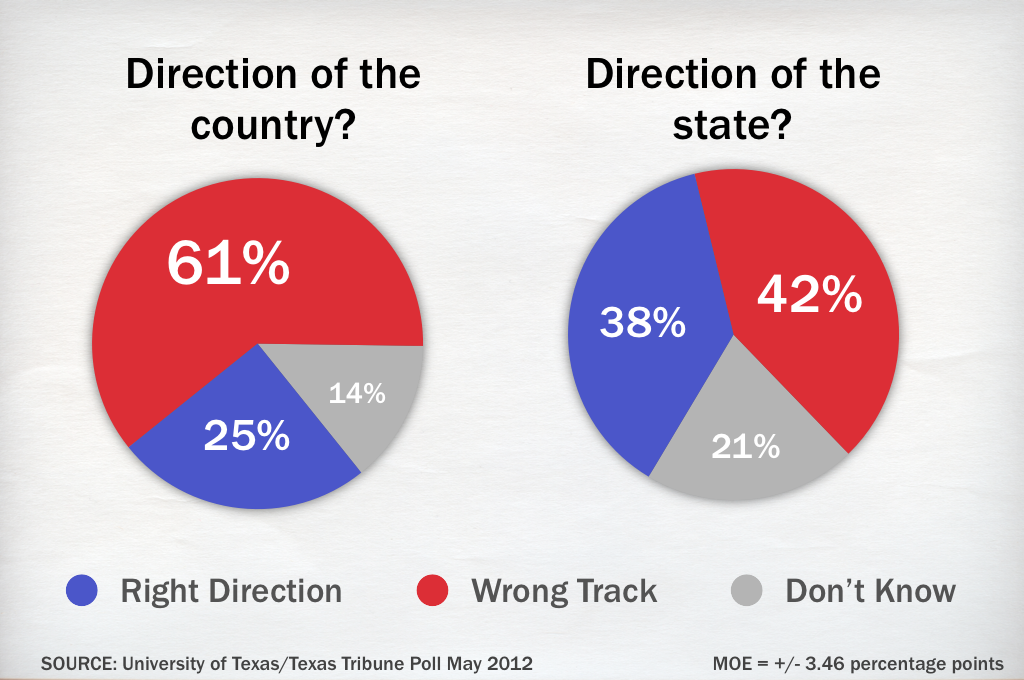 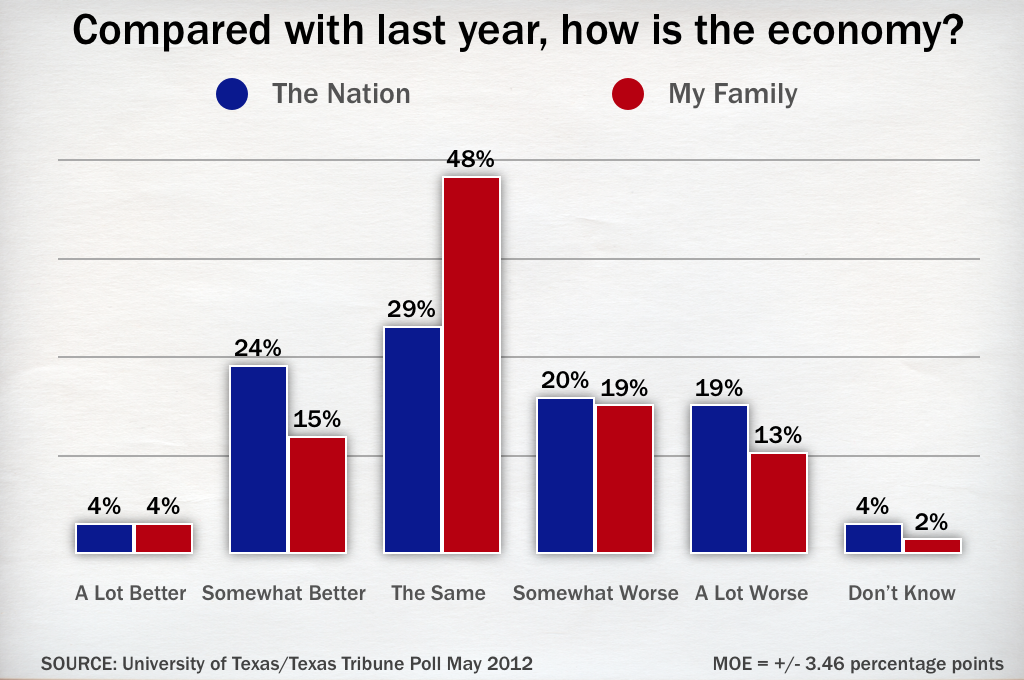 "It could be a lot worse — there's a bias for picking the wrong track," said Daron Shaw, a UT-Austin government professor and co-director of the poll. That in itself isn't a red flag, he said. But the number of voters saying their economic situation is worse could be.

"One in three saying they're worse off — this is still going to be a dominant issue in the elections," he said.

The economy continues to lead the list of most important problems facing the country. It's the top item on the national list, followed by related issues: federal spending and the national debt and unemployment and jobs. 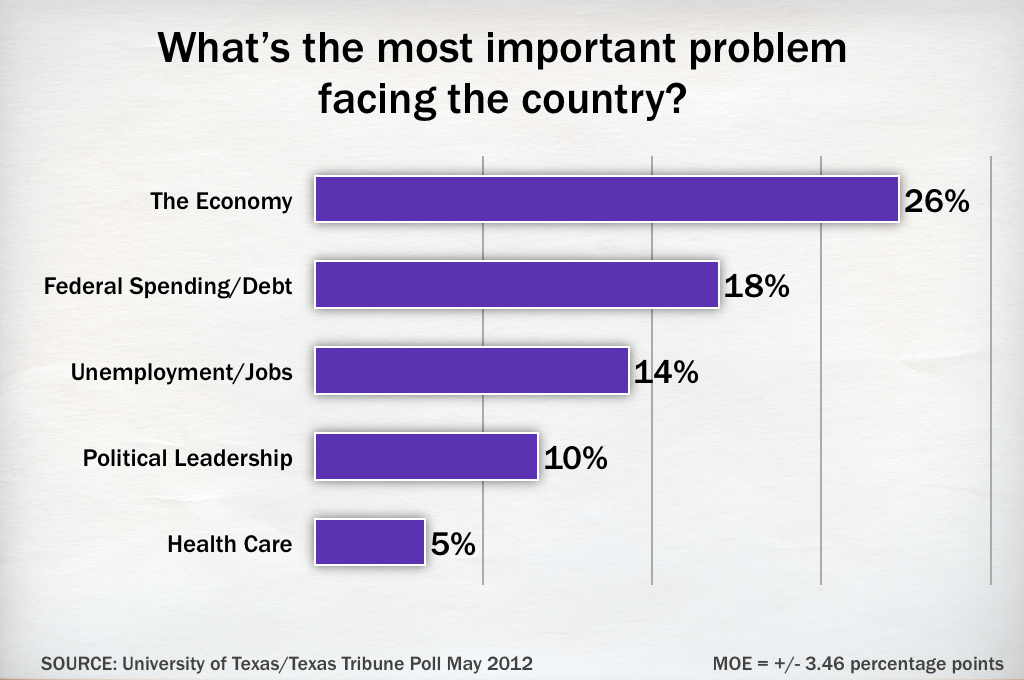 At the state level, voters put a string of issues into a virtual five-way tie, including immigration, the economy, unemployment and jobs, border security and education.

Political corruption and leadership — turned up as the top problem for 10 percent of the voters on both the national and state lists. On the federal level, Henson said, Democrats hold the White House and Republicans were most likely to select leadership and corruption as a big problem. On the state level, where Republicans are in power, Democrats were most likely to choose it. 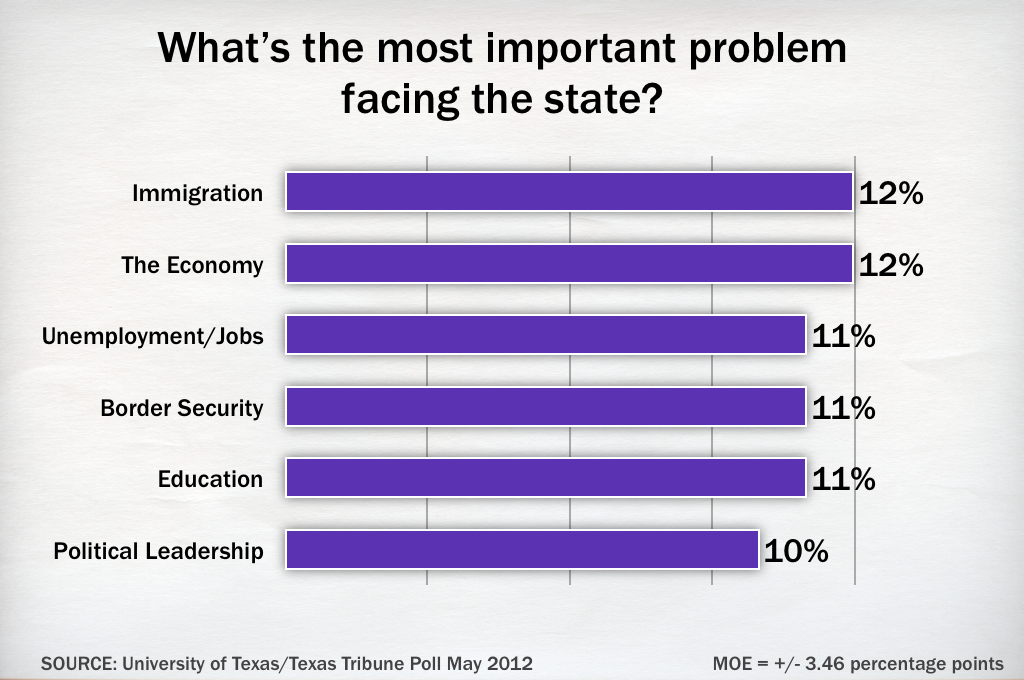 The UT/TT internet survey of 800 Texas voters was conducted May 7-13 and has a margin of error of +/- 3.46 percentage points. Questions asked only of Republican or Democratic voters have larger margins of error, as indicated. The numbers in the charts might not add exactly to 100 percent, because of rounding. And "likely voters" were defined as those who indicated they were "somewhat" or "extremely" interested in politics and who voted in "every" or "almost every" election in recent years.