This week, we took one last look at the primary races, hitting Republicans this time and focusing on Congress. In races with big fields, there's a lot of confusion among the insiders, but they tend to stick with the names they know, and with the incumbent where an incumbent is available.

U.S. Rep. Joe Barton, R-Ennis, was nearly a unanimous pick. In crowded races for open seats, most expect runoffs, and they went with candidates known to the Austin crowd: Rep. Randy Weber in CD-14, former Texas Secretary of State Roger Williams in CD-25 (followed by former Railroad Commissioner Michael Willams), and with Sen. Mike Jackson in CD-36. (Note: Our questions listed all of the candidates, but our charts list only the candidates who got at least one vote from the insiders.)

Most of the insiders expect a fairly low turnout in this delayed primary season, with 42 percent saying 1 to 1.5 million of the state's voters will turn out — somewhere around the 10 percent turnout range. Nearly a quarter think fewer than 1 million voters will show up, and another 22 percent put the number at 1.5 to 2 million.

We also asked when people will vote, and a third of the insiders think the early vote will account for more than half of the total. Another third put it in the 35-45 percent range.

We have attached the full set of verbatim comments; a sampling follows: 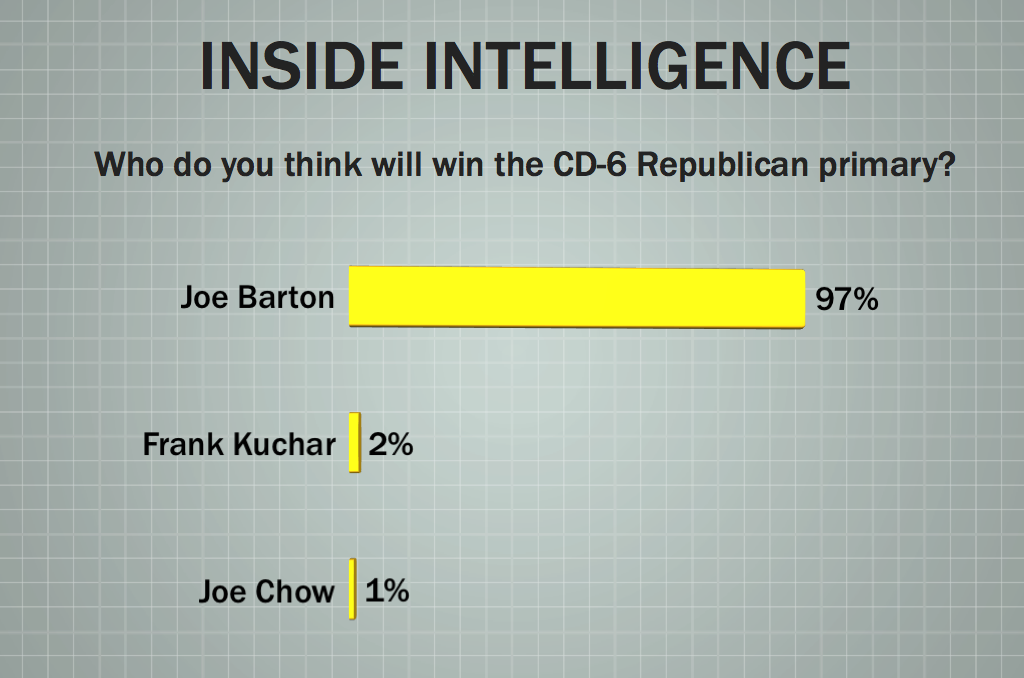 Who do you think will win the CD-6 Republican primary?

• "Not Joe's year to lose, but he definitely did not draw this district for himself."

• "Barton votes too conservatively to be defeated."

• "Being unhappy with an incumbent doesn't mean you can beat him."

• "Value of incumbency will prevail again.... Barton has stayed too long." 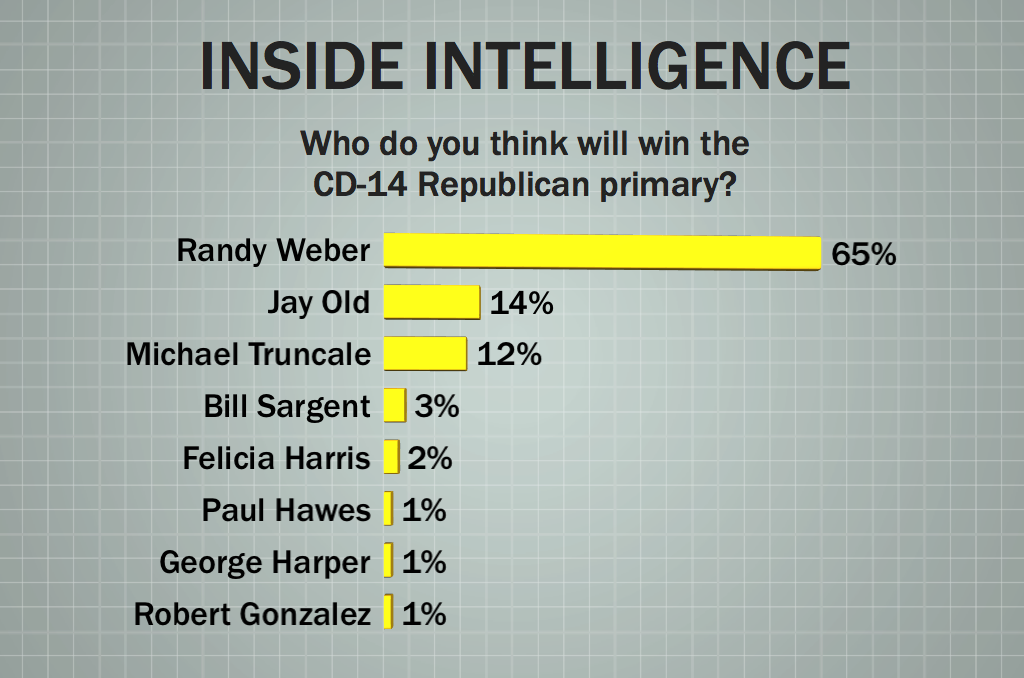 Who do you think will win the CD-14 Republican primary?

• "July on the Texas Coast...runoff weather!"

• "Randy has the experience and the ability to articulate the issues that the others lack."

• "You mean in July? You should have asked for the likely pairings."

• "Wealth and party service will likely translate into a win for Truncale."

• "Weber and either Truncale or Old in a runoff." 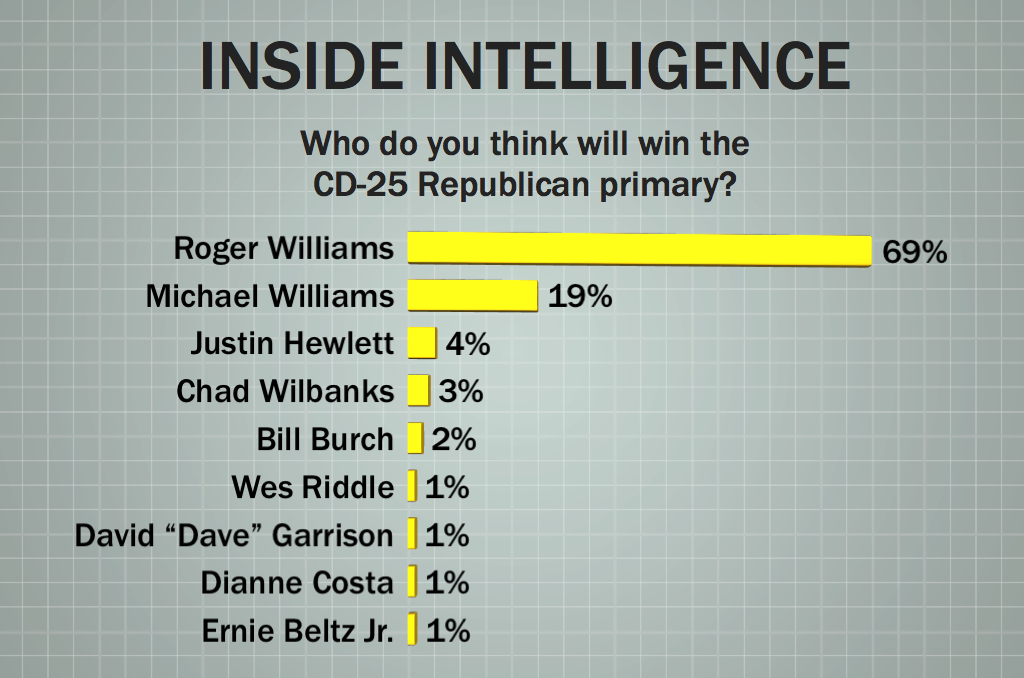 Who do you think will win the CD-25 Republican primary?

• "Feels like a runoff between Roger Williams plus either Dave Garrison or Michael Williams, with Roger winning the runoff."

• "Williams and Garrison in a run-off.  Big unreported story here is total collapse of Michael Williams."

• "Williams vs. Williams in a run-off.  Not talking Serena and Venus. Ultimately, statewide experience (and fundraising prowess?) wins.  The bowtie wins." 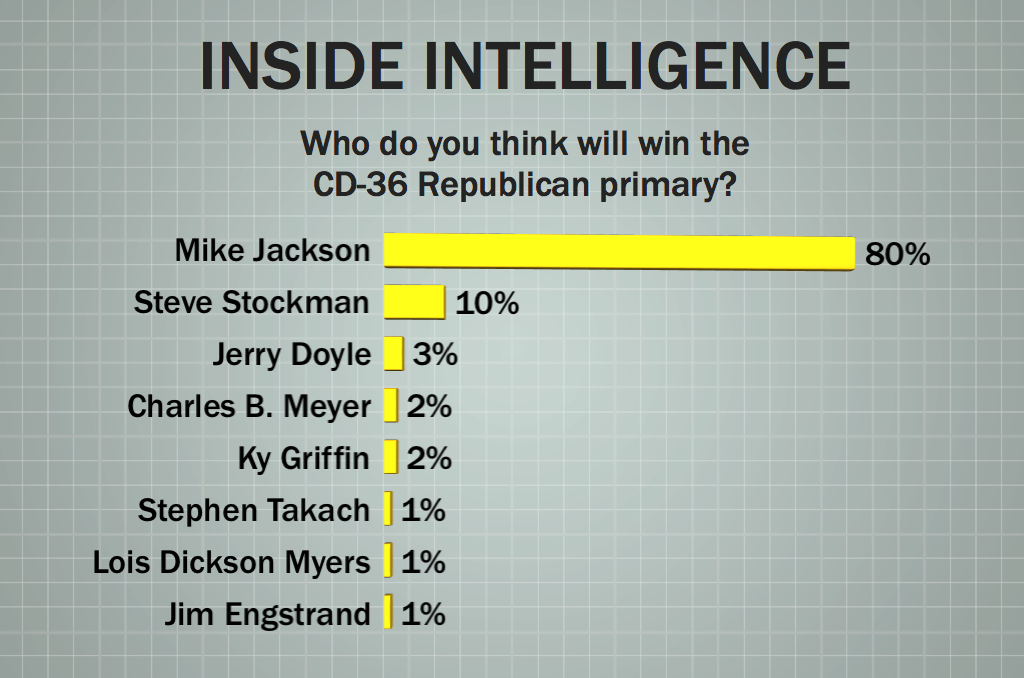 Who do you think will win the CD-36 Republican primary?

• "Mike Jackson oozes "Congressman" from every pore of his body."

• "Again, who knows, but Jackson should have some money and name id." 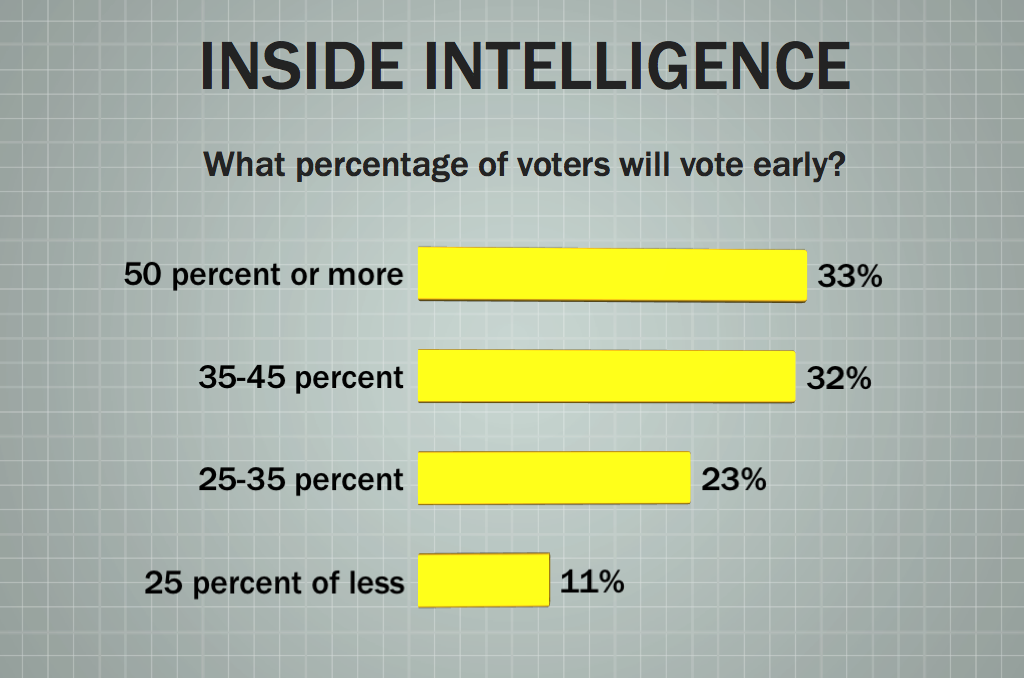 How many Texans will vote in the two primaries?

• "November will be the MUCH LARGER vote because voters will vote AGAINST BHO."

• "There is just not much interest this year."

• "There is too much voter confusion around the primary date to expect a robust turnout, though the Senate primary should bring out some motivated voters, especially in the Cruz corner."

• "What genius thought it would be a good idea to hold a primary election the day after Memorial Day?" 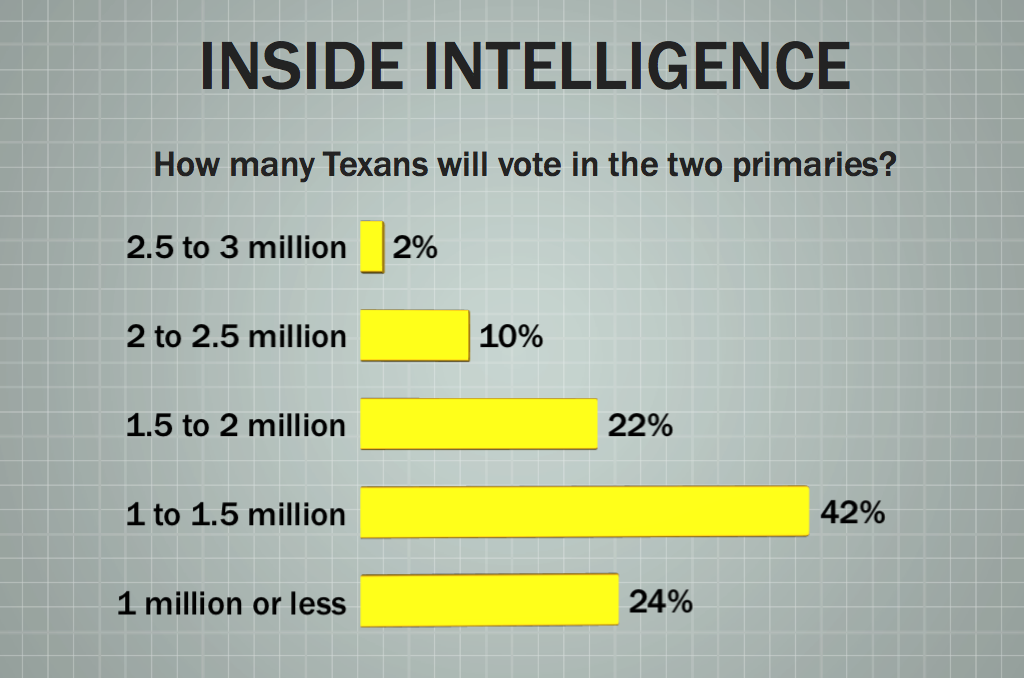 What percentage of voters will vote early?

• "Voters are earnestly seeking a NEW president. We cannot continue with an almost 25% unemployment rate."

• "With the mass confusion of redistricting and the fatigue of back-to-back municipal and primary voting periods, this will be an insider election."

• "One third has become average, but low interest will push early voting percentages up."

• "Only the hard core troubadours are voting in this one. Not a lot of walk-up traffic."