A lot of the sparse chatter this season is about turnout — whether anyone will vote and whether they'll vote early or after the Memorial Day weekend.

We'll leave the guessing to others. It's an odd date. The presidential fights are over, unlike four years ago. There isn't a hot gubernatorial primary, like two years ago. The race for U.S. Senate has been, from the standpoint of a voter looking for a heavyweight prize fight, dull. There are signs of elections around: Watch TV in Dallas-Fort Worth or look at the pileup of signs at some intersections in Pearland. But this feels more like a special election than a historic fight.

The 2008 primary turnout was weird, by all accounts. Nearly a quarter of voting age Texans — 24 percent — voted in the Republican or Democratic primary that year (Democrats outvoted Republicans by a 2-to-1 margin). That was a turnout not seen since 1988, and before that, since 1972. 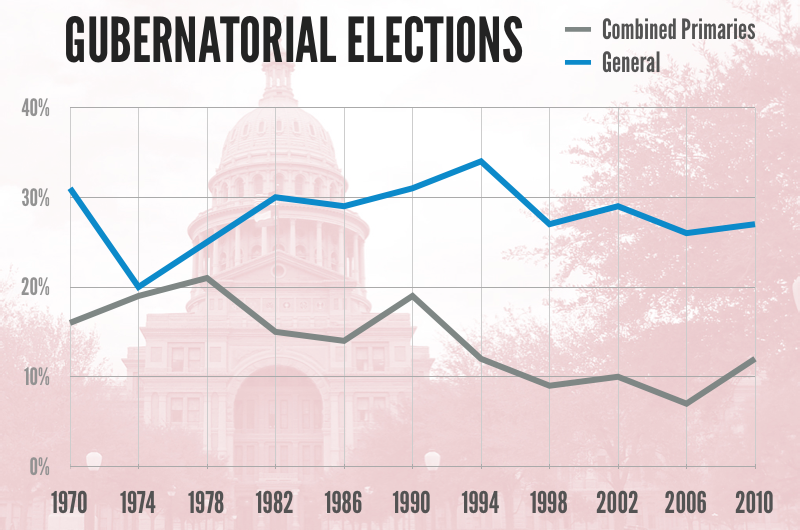 What's more, primary turnout has been on a slow slide for the last 40 years, topping 20 percent in only five of the last 21 elections. The lowest combined turnout from 1970 to 1990 was 14 percent; since then, it has reached 14 percent or more only three times.

General election turnout is steadier in presidential years, never dropping below 41 percent of the voting age population during those four decades and never going above 48 percent. It was between 44 percent and 48 percent in only one of those ten elections.

If that holds true this year, expect a turnout of around 8.8 million voters in November. In 2008, 8.1 million Texans voted.

As for the primaries, it depends. The high side, using those historical numbers, would be 4.5 million voters; on the low side (10 percent), it would be 1.9 million in the two primaries. In 2008, when 24 percent of voting age Texans voted in the primaries, 4.2 million people showed up. In 2004, only 10 percent showed up, or 1.5 million.

Special elections are generally light, but vary widely. The 1993 special that put Kay Bailey Hutchison in the U.S. Senate drew 15.7 percent of the voting age population.