We resumed our run down the ballot this week, asking the insiders who'll win in some contested Democratic congressional primaries. But we started with the story of the week — the sharp email exchange between Sens. John Carona, R-Dallas, and Dan Patrick, R-Houston that were shared first with their fellow senators and then leaked to the public at large.

Of the two, Carona came out ahead, according to the insiders. But they also said Sen. Kevin Eltife, R-Tyler — who wasn't involved or mentioned in the email shootout — was a winner. He's an early favorite in the race to succeed Lt. Gov. David Dewhurst, who is running for U.S. Senate, and the theory is apparently that anything that lowers a potential contestant raises his chances.

On to the races. Here's the short form: The insiders aren't divided on who'll win, choosing incumbents whenever they could. They like U.S. Reps. Lloyd Doggett in CD-35, Eddie Bernice Johnson in CD-30, Silvestre Reyes in CD-16 and Ruben Hinojosa in CD-15. Doggett is a member of Congress, but not technically an incumbent; he moved into CD-35 when redistricting left his home in Republican waters. In CD-23, where the incumbent is in the GOP primary, the insiders chose state Rep. Pete Gallego of Alpine over his primary opponents, including former U.S. Rep. Ciro Rodriguez of San Antonio and attorney John Bustamante. The winner will face U.S. Rep. Francisco "Quico" Canseco in November.

As we do every week, we've attached a full set of verbatim comments from the insiders. Here are some of the highlights: 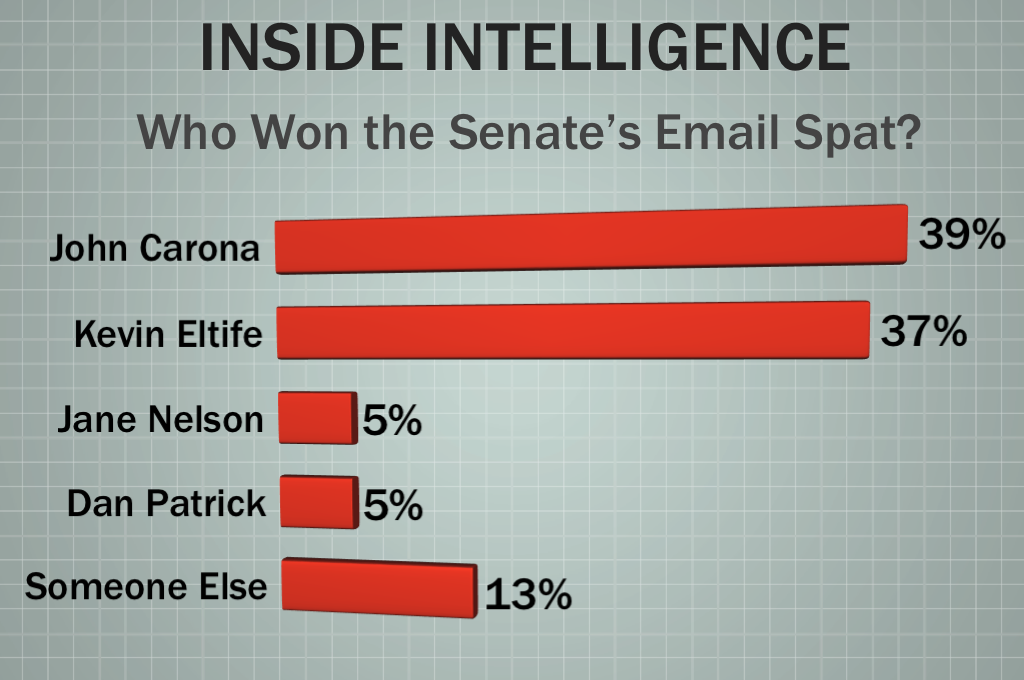 A bonus question, from this week's Texas Senate's headlines: Who won?

• "I didn't know the Senate was now a high school. Talk about cyber-bullying between those two 'esteemed' colleagues."

• "He's Sicilian! Wait for the horse head to appear in Patrick's bed!"

• "Why isn't 'no one' an option? Not sure who won or lost, but it appears someone clearly lost his marbles."

• "If Patrick had a problem with Carona, he should have come to him like a man. Patrick's overwrought actions ensured the Senate was the loser."

• "No one. The public does not understand all the inside baseball and this type of exchange does nothing to enhance the public's perception of state government."

• "Dan Patrick should learn how to use a telephone. Aren't there laws against spamming?"

• "Neither Carona nor Patrick gained favor with colleagues in preparation for Lt. Gov. selection. Eltife gained because he is seen as a non-controversial selection as Lt. Gov. for two year stint." 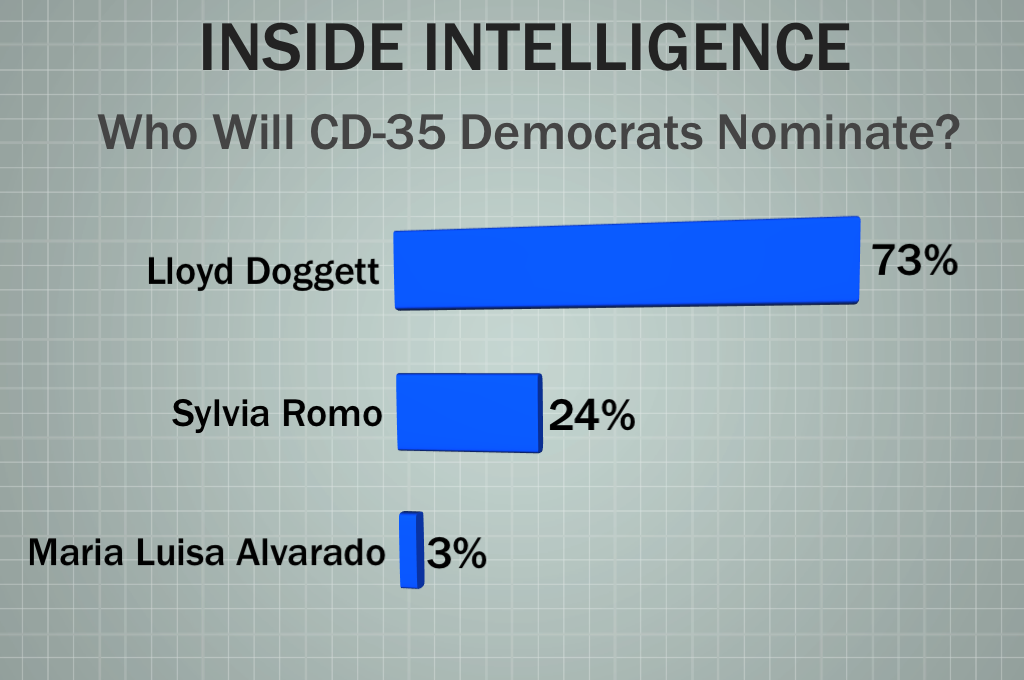 Who do you think will win the CD-35 Democratic primary?

• "SA prevails. Travis County finally gets it for being the 'liberal bastion'"

• "Prince was right. Money changes everything." 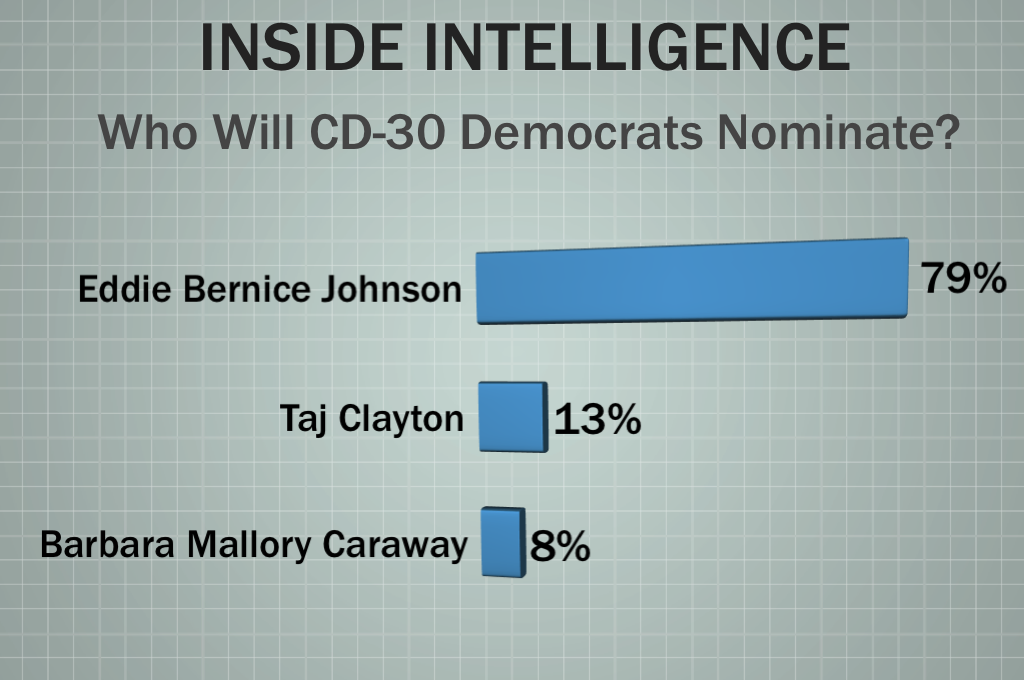 Who do you think will win the CD-30 Democratic primary?

• "I pity the residents of this district."

• "She had name ID and high favorables. Then Obama endorsed her."

• "Johnson will win, but Clayton is impressive and will be heard from again."

• "Power of incumbency trumps all." 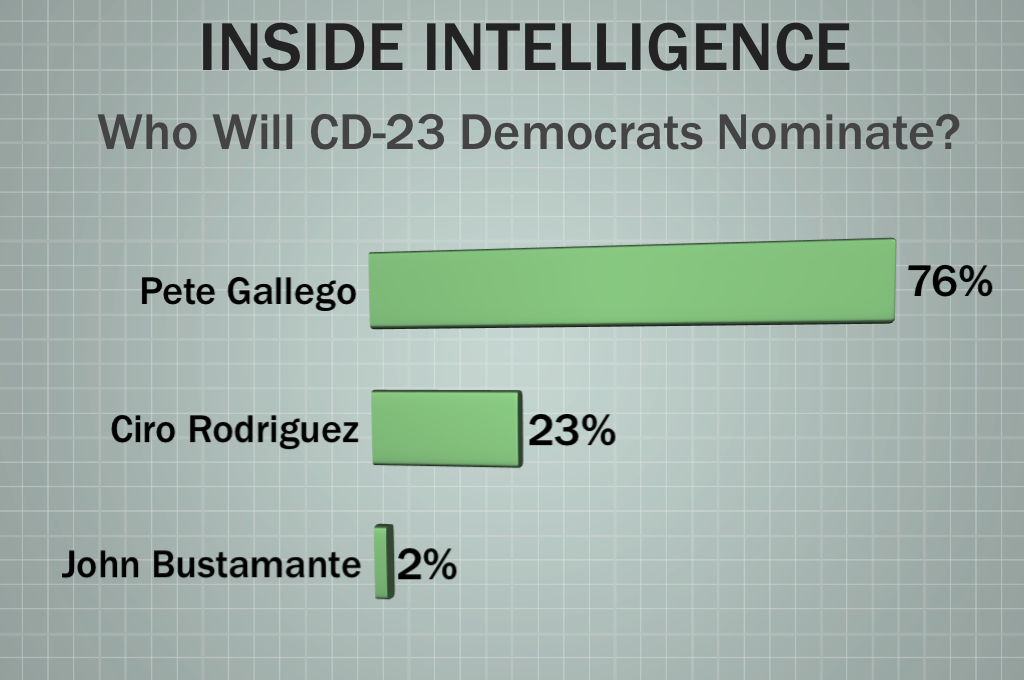 Who do you think will win the CD-23 Democratic primary?

• "Not sure, think a runoff is in the works here."

• "In a Democratic primary, always bet the most liberal candidate."

• "Pete's been working the district hard, has waited his turn, and has no baggage, unlike Ciro." 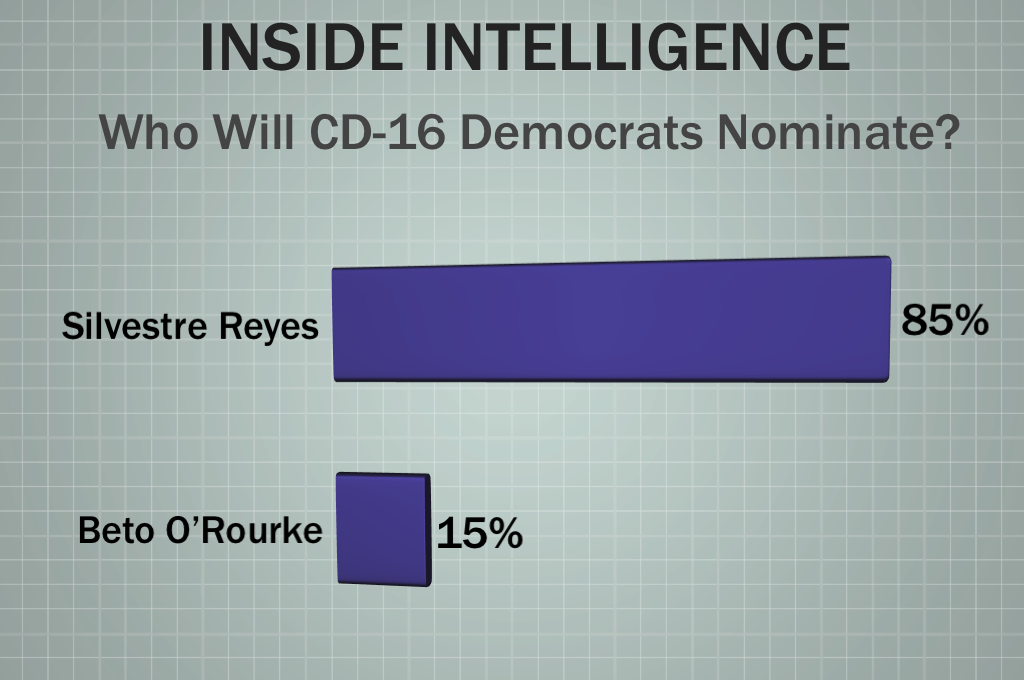 Who do you think will win the CD-16 Democratic primary?

• "Incumbency & the Clinton effect will prevail."

• "With crowded fields in the CD 15 and CD 16 Democratic primaries the incumbent likely takes it. The others dilute the opportunity for one strong candidate to win"

• "Name identification, regardless his poor record, wins at the polls." 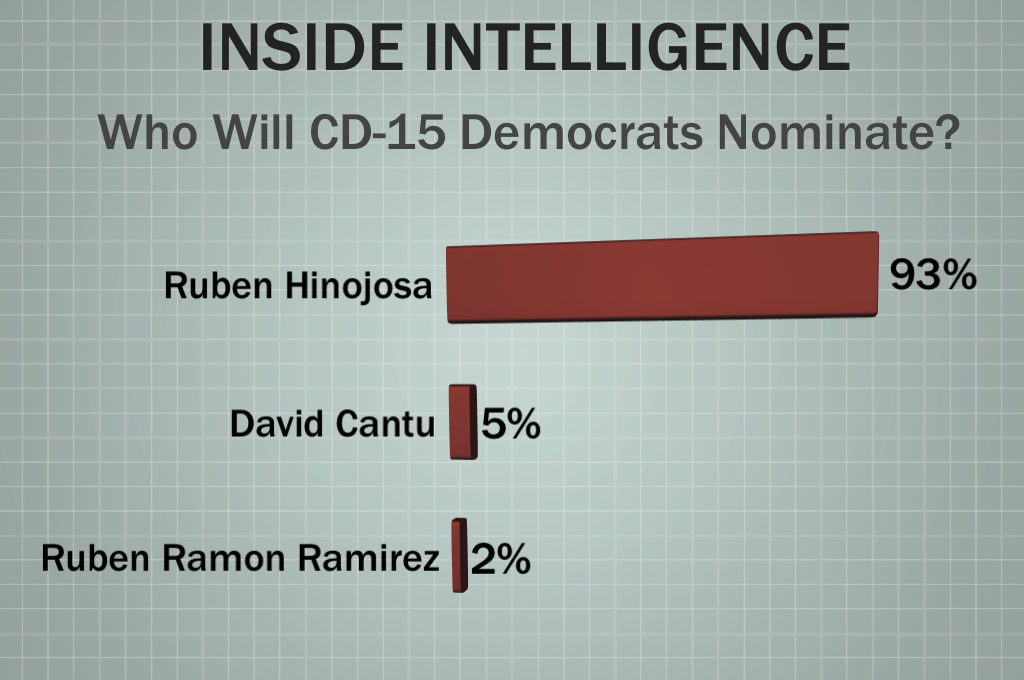 Who do you think will win the CD-15 Democratic primary?

• "Who? Are these really candidates?"

• "Bankruptcy aside, the incumbent will win this one."