This week, we asked the insiders to weigh in on issues and outside influences on the party primaries, about early voting and about making it easier to vote.

The economy leads the list of issues that will determine the May 29 outcomes, according to the insiders, followed by state education spending, taxes, party affiliation, social issues and the state budget. A mix, in other words. But the top two issues outpaced everything else on the list.

The biggest third-party influences on the elections, the respondents said, will be Tea Party activists, Texans for Lawsuit Reform, and wealthy donors. It's apparent from that lineup that the insiders are thinking a lot about the Republicans on the ballot, and not so much about the Democrats.

Finally, we asked whether the state should allow online voting or some other way to make voting easier in an effort to increase participation. The insiders split right down the middle, with 47 percent saying yes and 48 percent saying no.

As always, we've attached the full set of verbatim comments to our questions. Here's a sampling: 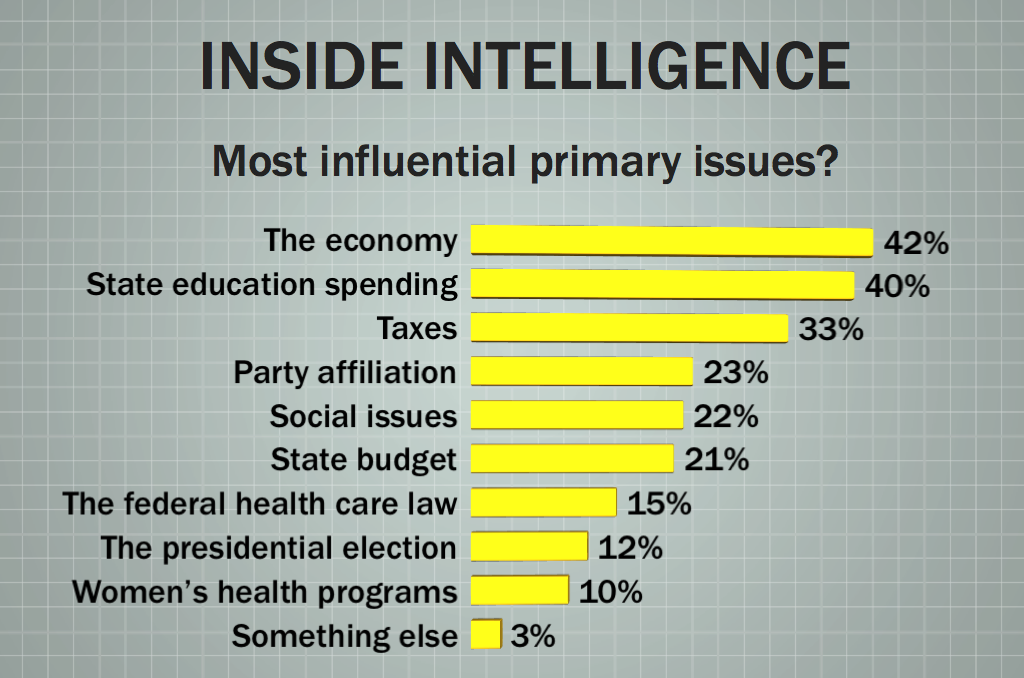 What issues will be most influential in the Texas primaries?

• "I would add Speaker vote and us citizenship to the issue list."

• "Pocketbooks and checkbooks still rule at the ballot box."

• "It's still the economy, Stupid.  And all issues start and end with the state budget."

• "State education spending will be front and center. It will be a keystone issue for the next election cycle. The groundwork has begun."

• "It's a presidential year. The state elections will be even more nationalized than usual."

• "'It's the economy, stupid'.  But since we're stupid, social issues will matter too."

• "Republicans who voted for Joe Straus for Speaker" 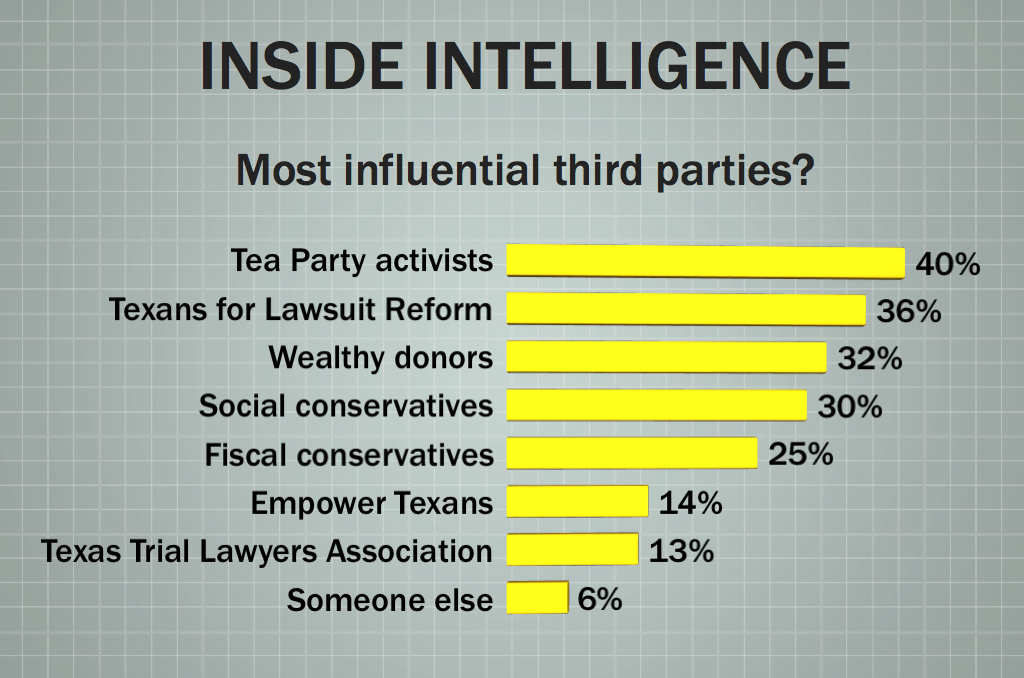 That third parties will be most influential in the primaries?

• "Tea Party: They are mad and they vote. It's not just a bumper sticker on their car (like so many of the other groups). They actually are and actually do."

• "Statewide, it will be wealthy donors and various groups, like TLR and TTLA.  Locally, it will be hard core partisans, like tea party folks, fiscal conservatives, and uber-liberals."

• "Tea who?  Are those people still around?  Give it up to the social and fiscal conservatives, as they'll push anything 'anti' this primary season; anti-Obama, anti-establishment, anti-incumbent, anti-federal spending, anti-women's health, anti-minority, anti-public education.  Did I leave something out?"

• "The legislature is a wholly owned subsidiary of TLR now. How do I know? I found the receipt at the Ethics Commission."

• "Light turnout will favor those with money to get their votes out."

• "The two party system in Texas has become The Tort Reform Party and The Trial Lawyer Party.  Everything else are just holdovers from a forgotten era." 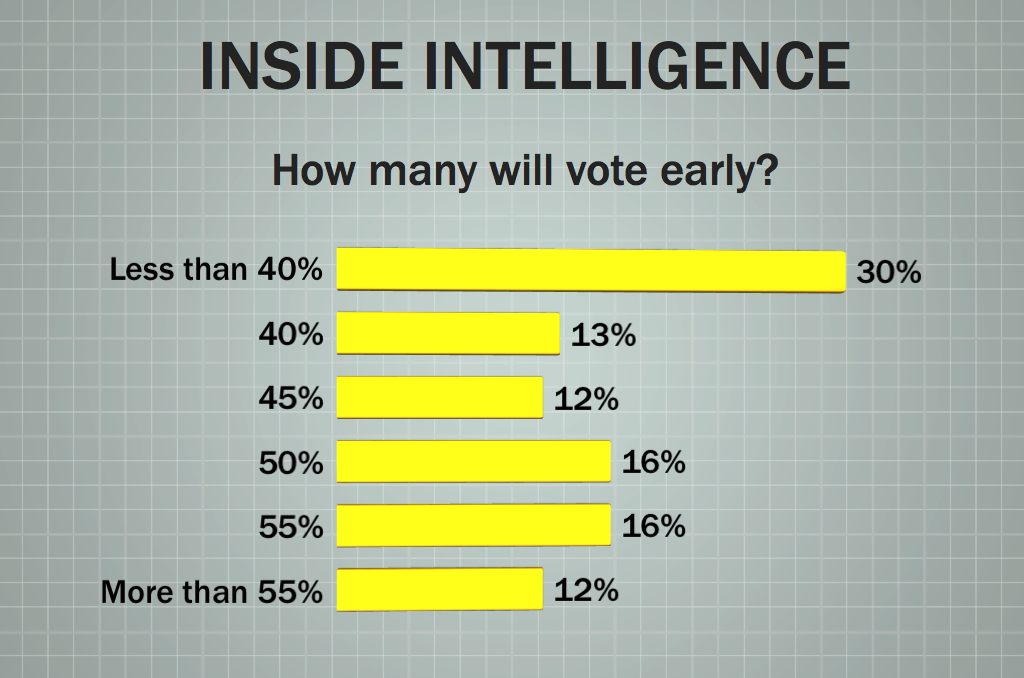 What percentage of voters will vote early?

• "Will likely be record early turnout due to end of school activities and Memorial Day holiday all around this years election day."

• "It's the overall turnout rate that will be most depressing."

• "Because of the redistricting battle pushing back the primary election, I think most people think the election has come and gone."

• "The collapse of the presidential contest will suppress the vote.  Many campaigns are actively pushing voters to vote early.  The net effect for many parts of the state may well be > 50 % early voting (Although maybe not to that level in DFW which has several hotly contested seats)." 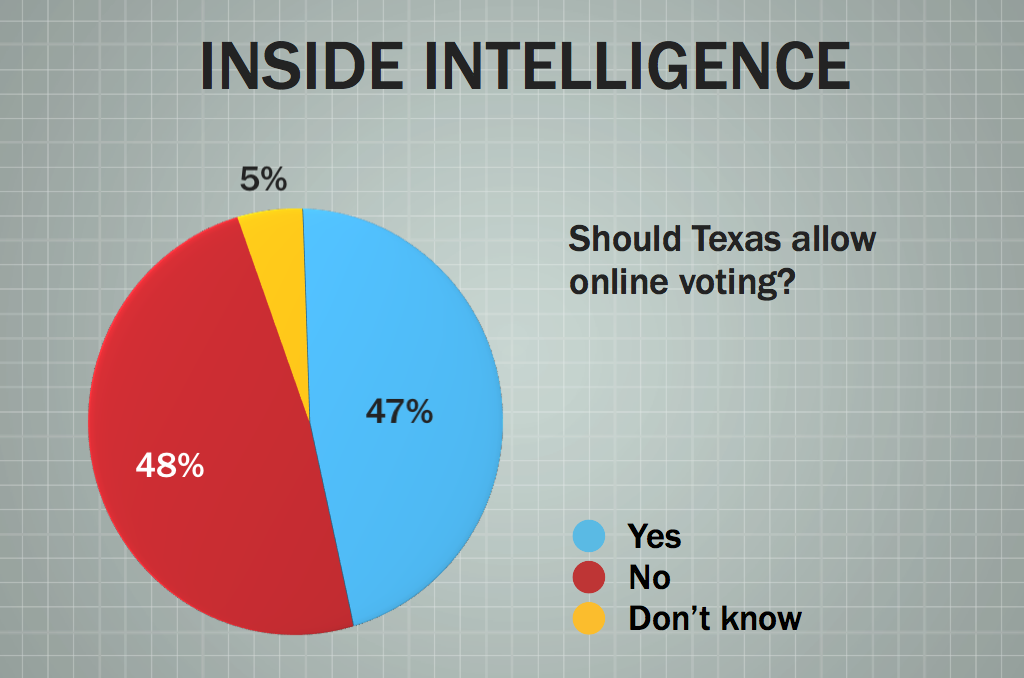 Should the state develop online voting or some other way to make voting convenient, to increase turnout?

• "Technology doesn't impact apathy. There's no app for that, it's not a matter of convenience. We have early voting. Mobile voting. GOTV efforts. The numbers are always relatively the same."

• "Our turnout rates are embarrassing, benefiting only incumbents and those who fund/control them. Weekend elections, same-day registration, and vote-by-mail are all options that should be seriously explored. However, the Republican powers that be do not want to run the risk of the hard-working brown masses actually exercising their franchise."

• "The state ought to allow registration/voting on the same day in primaries and general elections (early voting/election day).  We're in the 21st Century and I don't know why one needs to register one month before an election just to vote."

• "The state needs to first secure 'offline' voting before they even THINK about developing online voting."

• "Early voting is bad for democracy - it makes campaigns more expensive and uncertain without increasing turnout.  I would mandate voting centers, so that a voter could vote anywhere in the county, as we do in early voting already, and restrict early voting to mail-in absentee with an excuse, as in the old days."

• "If mail in ballots and early voting locations are not enough what is, people are just lazy.   If you cannot take a few minutes to vote but will plant your butt at a ball game for hours then please...."

• "How could it be more convenient?   You can vote 10 days in advance of the election at HEB, in some cities.  You can vote on the weekends.   Give me a break."

• "Sure and I would love to represent that vendor."