Editor's note: Mark P. Jones, chairman of Rice University's political science department, is taking his work on the ideological stands of state legislators to another arena, namely how candidates with legislative voting records compare with one another. As you might expect, it depends. Jones' paper follows.

The Extent of Ideological Differences in Six Texas GOP Primaries

The 2012 primary season features a host of highly contested legislative races involving competing ideological and interest groups within the Texas Republican Party. I examined six — four in the House and two in the Senate — which each involve two current or former state legislators. Based on roll call vote data, the House races display substantial ideological contrasts between the candidates, but the Senate contests involve only modest to nonexistent ideological differences. If the House races are true battles for the ideological soul of the Texas GOP, then the Senate contests are mere skirmishes between competing conservative elites featuring candidates with relatively similar ideological profiles.

In the midst of dueling endorsements by leading Texas Republicans, claims and counter-claims by candidates, and distorted or selective information publicized by third-party groups, it is useful to have a common metric with which to compare the rival candidates. DW-NOMINATE (www.voteview.com) is a sophisticated statistical program originally developed to study the U.S. Congress. It allows for the accurate comparison of the location along the liberal-conservative ideological continuum of legislators who served at different points in time. Here it provides an objective empirical measure with which to locate the candidates in these six primary races on the liberal-conservative dimension along which most voting takes place in the Texas House.

The figure provides each representative's most recent Liberal-Conservative Score (the higher the score, the more conservative the legislator) along with the 95% confidence interval (CI) surrounding the score. Only when the CIs of two representatives do not overlap can we conclude that their respective Lib-Con Scores are significantly different from each other. The first year of the legislative period from which the Lib-Con Score presented here is drawn is in parentheses following the legislator's name. Also provided is more general information (see the vertical dashed lines) on the Lib-Con Scores of the representatives located (from left to right) at the 25th, 50th, and 75th percentiles of the aggregate Republican delegation during the 2001-11 period. That is, one quarter of the GOP representatives during these six legislative periods were located to the left of the 25th percentile line and one quarter to the right of the 75th percentile line, while the 50th percentile represents the GOP delegation's midpoint. 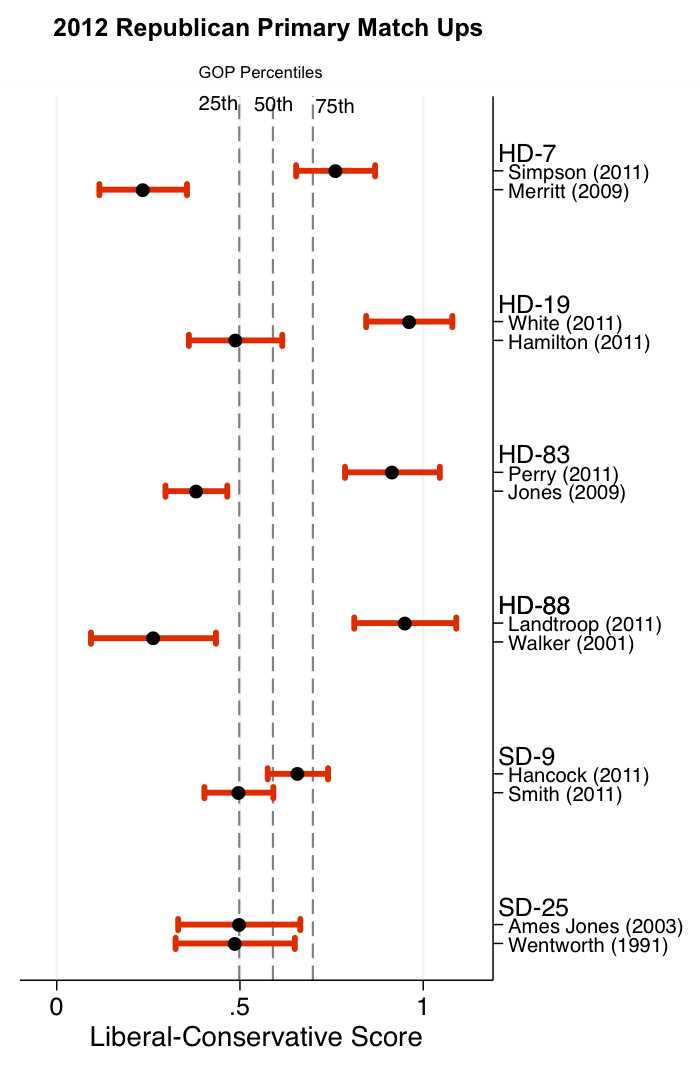 In the four Texas House primaries, the data reveals clear separation between the two current/former representatives competing for the Republican nomination. In these safe Republican seats, a primary win guarantees victory in November; only Republicans filed for this year's elections.

The largest ideological gaps exist in the HD-88 race between Rep. Jim Landtroop of Plainview and former Rep. Gary Walker of Plains, and in the HD-83 race between Rep. Charles Perry and former Rep. Delwin Jones, both of Lubbock. In both districts the incumbent's ideological location is on the far right edge of the Republican ideological spectrum, with Landtroop and Perry's respective 95% CIs ending to the right of even the 75th percentile of Republican representatives. In sharp contrast, both Walker and Jones possess Lib-Con Scores at the opposite end of the spectrum, with their respective CIs stopping to the left of the 25th percentile of Republican representatives. Alone among these six primaries, HD-88 features two viable candidates who are not current or former representatives: Ken King of Canadian and Mac Smith of Pampa.

A substantial ideological divide also separates two Longview contestants, Rep. David Simpson and former Rep. Tommy Merritt, in HD-7. Like Walker and Jones, Merritt occupies a position on the liberal-conservative dimension which is significantly less conservative than a majority of Republicans who held office during this period. While Simpson is firmly within the very conservative wing of the Republican Party, he is somewhat less conservative than Landtroop and Perry.

The primary in HD-19 features two incumbents, Mike "Tuffy"Hamilton of Lumberton and James White of Hillister. Similar to Landtroop and Perry, White's score makes him one of the most conservative GOP representatives to serve during the 2001-11 period. Unlike Walker, Jones and Merritt (whose respective CIs did not even cross the 25th percentile line), Hamilton's Lib-Con Score locates him closer to the center of the GOP delegation.

The two Senate races lack the stark ideological differences found among the House candidates. As was the case in the House races, the two Senate contests are in safe Republican districts.

In SD-9 current Reps. Kelly Hancock of North Richland Hills and Todd Smith of Euless face off. Hancock and Smith are both Republican centrists in comparison with their fellow legislators, with Lib-Con Scores located between the 50th and 75th and 25th and 50th percentiles respectively, and CIs which both cross over the location of the median House Republican. While Hancock's Lib-Con Score is slightly more conservative than Smith's, the overlap of their respective CIs indicates we cannot conclude that Hancock is significantly more conservative than Smith. This conclusion is reinforced by other roll call vote-based analysis focusing exclusively on the 2011 session in which Hancock and Smith's ideological positions were even closer than presented here.

In SD-25, the Lib-Con Scores of San Antonio's Sen. Jeff Wentworth and Elizabeth Ames Jones, a former legislator and railroad commissioner, are for all intents and purposes indistinguishable. Both have scores near the 25th percentile, with CIs which cross substantially over the 50th percentile. Based on their House voting records, Jones and Wentworth possess nearly identical ideological profiles which place them in the center (with a modest leftward tilt) of the Texas House Republicans. One caveat to this analysis is that Wentworth's tenure in the House ended almost 20 years ago. Certainly, his ideological position could have changed since then, although his Senate voting record in 2011 suggests Wentworth has not become less conservative over time.

Each one of the four Texas House primaries provides Republican primary voters with very clear and distinct ideological options from competing ends of the conservative ideological spectrum. The results of these four litmus tests will provide important signals as to the current balance of ideological forces within the Texas Republican Party. The ideological contrast is much less sharp in both of the Senate matchups, with limited to no real ideological differences observed between the rival candidates.