EL PASO — Outside a building that provides medical care for wounded soldiers at Fort Bliss, two long, dark lines of hundreds of solar panels stand on supports over the parking lot, moving to follow the sun.

“Everybody wants to park under the solar panels,” said B.J. Tomlinson, the renewable energy and sustainable engineering program manager at Fort Bliss. The roughly $1 million system, paid for by the Army, began producing power this year.

Solar panels are popping up across Fort Bliss, which is the nation’s largest army post by physical size, covering an area slightly larger than Rhode Island. The panels are part of the base’s effort to cut its net energy and water usage, reduce waste and thus demonstrate self-sufficiency, a concept that can have a large impact on operations abroad. The military refers to it as “net zero,” and bases like Fort Bliss and Fort Hood have embraced it, but high upfront costs pose challenges.

In Central Texas, Fort Hood has a goal of “net zero” waste by 2020. The base, second to Fort Bragg in total number of soldiers, will claim success if about 90 percent of its trash avoids a landfill, according to Brian Dosa, Fort Hood’s director of public works. Right now, more than half goes into the base’s landfill.

Achieving these goals will be tough, officials at both bases said.

“It’s really as much about behavior change as it is about technology,” said Dosa. Recycling rates at soldiers’ housing complexes, for example, are low, he said. In addition to recycling, Fort Hood wants to reduce packaging and encourage reuse of materials like household goods.  (See YouTube video from Fort Hood at the bottom of this article.)

Fort Bliss’s plans are especially ambitious. It is the only base besides Fort Carson in Colorado selected by the Army to achieve “net zero” in three categories — energy, water and waste. And it must do this by 2018 despite a massive increase in size: Due to the First Armored Division’s return from Germany, the number of soldiers assigned to Fort Bliss is more than tripling to about 30,000. Electricity usage, for example, could jump by up to 60 percent between fiscal 2010 and 2015.

Solar is a logical choice for Fort Bliss, which extends from relentlessly sunny El Paso into New Mexico. A large field of solar panels, which will more than double the existing solar capacity, should be producing power by the end of the year, bringing the base up to 1 percent solar electricity.

The new panels will be adjacent to the headquarters of the First Armored Division, where the base’s commanding general has an office. “He’s going to be able to look out the window and see all of that,” Tomlinson said.

Prices for solar remain expensive, and cost-cutting has become a watch-word for the government. Tomlinson hopes that construction will start next year on a 20-megawatt solar project that would be two-thirds of the size of the largest existing solar array in Texas. The army is trying to arrange private financing for the multimillion-dollar project.

Solar alone will not get the base to net zero energy, Tomlinson said, so he is considering a range of other technologies, including wind turbines, geothermal wells and a plant that would convert garbage into energy. But those projects would have to go through multi-layered permitting processes.

Some outside experts are impressed with the Army’s efforts. “When the military makes up its mind to do something, I think they can get it done,” said Doug Lewin, executive director of the South-central Partnership for Energy Efficiency as a Resource, who visited Fort Hood in February. The projects at Fort Bliss, he added, are “really exciting.”

Cutting water use will be a particular challenge for Fort Bliss. El Paso is the driest big city in Texas, and the ongoing drought resulted in just 5 inches of rain last year compared with the normal 10 inches. 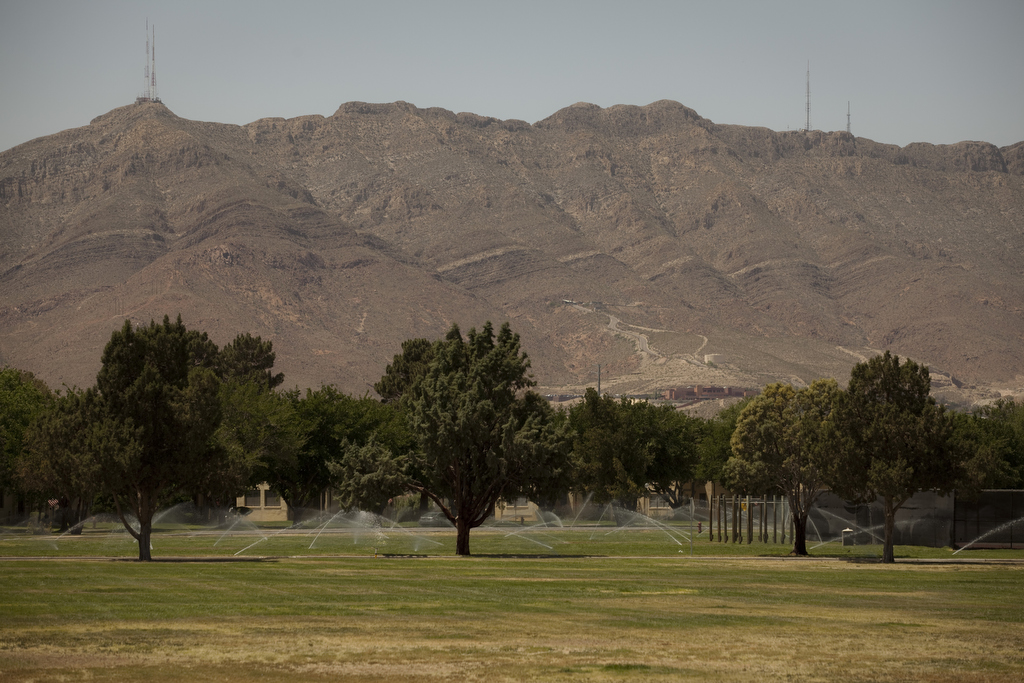 Enlarge photo by: Ivan Pierre Aguirre
Sprinklers during the daytime at Fort Bliss.

Water-efficient fixtures like low-flow showerheads are being installed in soldiers’ quarters, according to Tomlinson, although the Army is wary of associated costs and water is already inexpensive. Many buildings on the base use xeriscaping outdoors, with small rocks and desert shrubs.

Yet the older part of the base, the site of expansive parade grounds and housing for some top commanders, still has plenty of grass. On a recent day, dozens of sprinklers sprayed water across some of the grounds at 10 a.m., when losses to evaporation in the sunlight are high. The army is trying to change its watering schedules, and a plan also calls for bringing reclaimed — or nonpotable — water to the base, but that project would cost at least $17 million and would not be complete for several years, Tomlinson said.

The base’s net zero goals do not include military training operations, such as the fuel used in the tanks on the base. But the military is working on these lines as well. On May 18, Fort Bliss soldiers will demonstrate the use of solar panels for small patrol bases, efficient batteries and other technologies to an audience that will include the assistant secretary of defense for operational energy. Reducing the amount of energy used by army equipment translates to smaller loads for supply convoys, a favorite target for insurgents in places like Afghanistan.

At Fort Hood, going greener has meant some major shifts. Three or four years ago, Dosa said, the entire base had one electric meter. Back then, “you had no idea and you didn’t care about how much electricity you were using,” he said.

Now, the base is putting meters on virtually every building, and using behavioral techniques to reduce usage. For example, the bill for every brigade now gets sent to its commander and is discussed in the presence of the commanding general of the base.

“Now we’re getting units to be interested, just like they would be if they were in their own home,” Dosa said.

Last month Fort Hood turned on a 1-megawatt solar installation, its largest, to provide power for a housing village. The Army paid none of the $3 million cost; instead, the private housing company shouldered it and will recoup the cost through reduced electric bills.

Still, Dosa said, “the challenge, to be honest, is the economics.”