With the Texas Ethics Commission up for Sunset Review this year, we turned to the state's ethics laws for this week's survey of political and government insiders. First, we asked whether the TEC should have more regulatory and enforcement powers, a question that elicited a "yes" from 57 percent of the insiders. A strong majority — 77 percent — said lobbyists who fail to make required disclosures or who fail to register should face tougher penalties than they currently face.

Should lawmakers be stripped of their state pensions for violating the state's ethics laws? This got a split response, with 42 percent saying yes and 37 percent saying no. In their comments, several insiders said it should depend on the severity of the violation.

Finally, we asked about third-party groups — those not set up for specific candidates or initiatives — and whether they ought to abide by the same reporting requirements as everyone else. Four of five respondents said yes.

The full set of verbatim comments is, as always, attached. Here's a sampling: 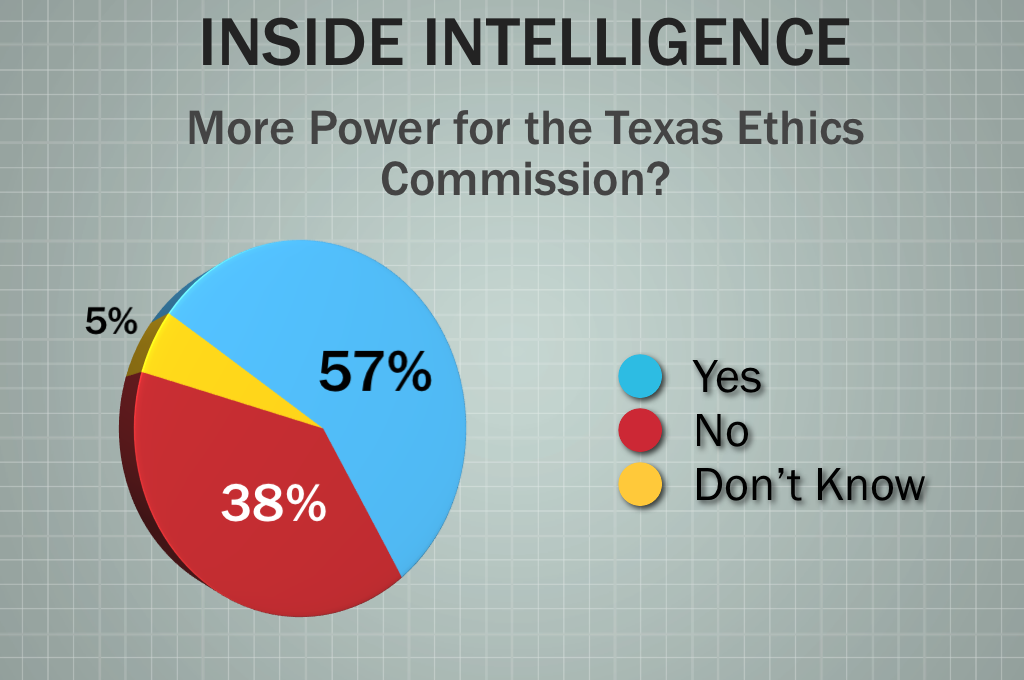 Should the Texas Ethics Commission have greater regulatory and enforcement powers?"

• "Not unless the commission had greater autonomy."

• "Of course they should have more enforcement authority...but they should also have the power to dismiss 'petty' complaints."

• "There is no deterrent factor under current statutes."

• "How about it consistently enforce current regulations before granting it additional powers."

• "They should enforce what is already under their purview. Also, Ethics Commission needs to be funded to upgrade their technology to allow greater transparency and ease of review. The agency needs the right tools and staff to handle their current responsibilities."

• "The present system is largely complaint driven. It would be nice for the sheriff to act before he got a call from the posse."

• "They also need to be independent and free of partisan control."

• "People are quick to say 'more rules, harsher penalties' when they think the changes would create some immediate pain for their current enemies, but - as the old saying goes - be careful what you ask for."

• "The Ethics Commission has the horrible job of trying to regulate political speech. To give them more power to do so would idiotic. Why the left feels the need to regulate the first amendment is a 'mind boggling thing'"

• "But if the Ethics Commission gets enforcement powers, it'll just want to use them. Total buzz kill." 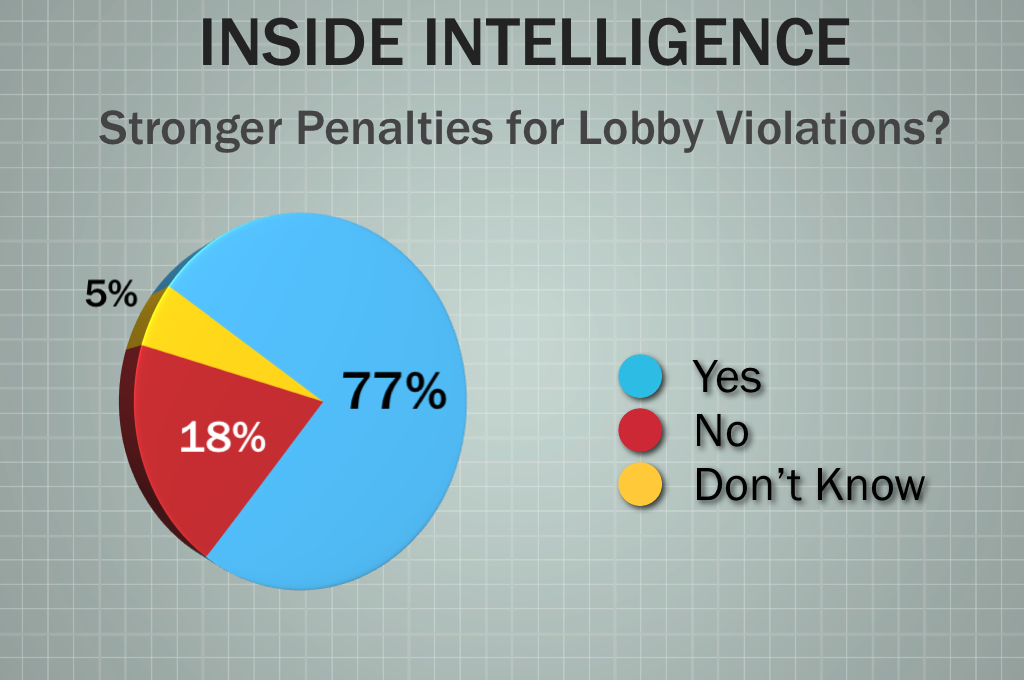 Should there be stronger penalties for lobbyists who fail to register or make required disclosures?

• "Depends on the type and degree of the non-compliance."

• "Yes, with a caveat. The commission should not impose fines on someone who corrects a disclosure filing on their own. The current policy is to fine folks who self report errors in their filings. So, who on earth would ever correct a filing?"

• "But not for small or technical violations. Forgetting to report one dinner, no. But large sums + intent to conceal, yes."

• "Not unless there is some documented evidence of widespread failure to register or disclose."

• "Especially those that don't register. Lobbyists that are lawyers are making a mockery of the system. They are doing 'legal work' and therefore don't report."

• "The penalties are already pretty tough, but they're simply not enforced."

• "Maybe the media can do a better job of exposing abuse. That'd be a bigger club than a new rule."

• "Lobbyists who opt out of abiding by existing rules have an unfair 'market advantage'. It's in the best interests of all lobbyists to weed them out of the Capitol." 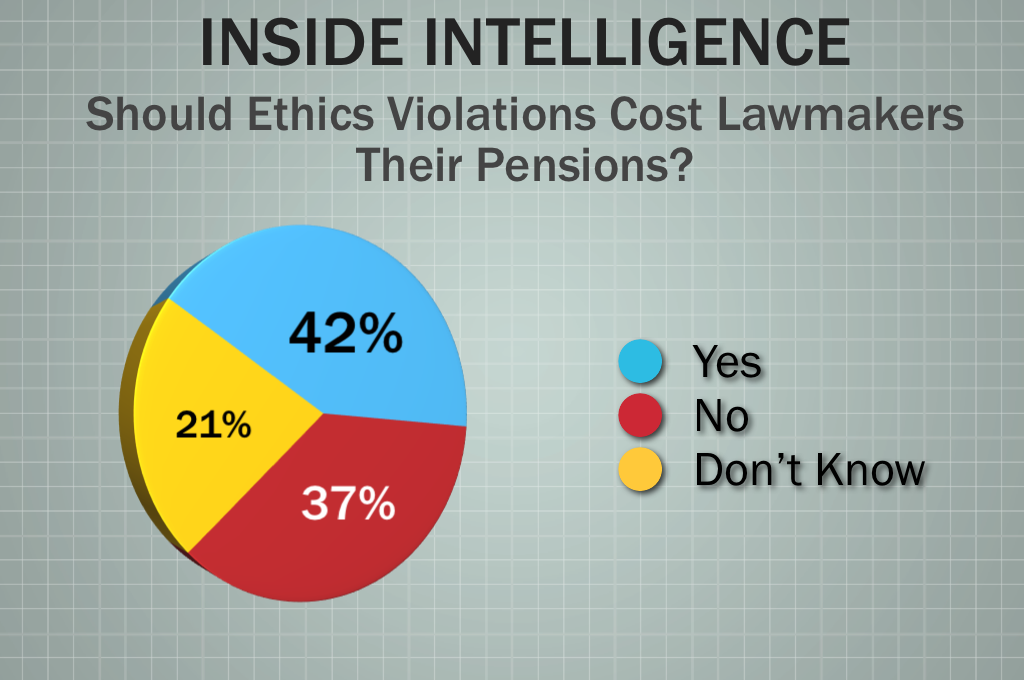 Should legislators who violate state ethics laws be stripped of their state pensions?

• "Depends on the extent of the violation"

• "Not until there is better distinction between true violations and lesser penalties."

• "But only in severe cases. The reporting laws are tricky and mistakes are made. But if there is an intent to conceal and a large sum involved, then pensions should be lost. E.g., Joe Driver"

• "Kinda depends on the specific facts, no? Which state ethics laws? Intent to violate or inadvertently did so? Multiple offender/violator? If we do go along this, it shouldn't be limited to legislators. Executive branch officials should play by these rules, too. As should executive and legislative staffers."

• "Not all state ethics laws are equal, so the severity of the penalty should mirror the severity of the violation. But certainly a double-dipping violation like Joe Driver's should meet the minimum threshold for losing or reducing the amount of the legislator's state pension."

• "Do you honestly believe the Leg would penalize themselves?"

• "This is the real leverage. For major offenses that are unworthy of the office, you should lose the privileges of the office. Eric Johnson has shown political courage in bringing this issue to the forefront."

• "Personal experience with TEC shows that they are quick to bring down the hammer on tiny (but indisputable) technical violations while doing little or nothing about matters of substance. I would hate to see someone stripped of her pension for being 2 days late on a filing, or for putting the information in the wrong box."

• "They should literally be stripped and paraded through the streets past a taunting populace, but I'll settle for their pensions." 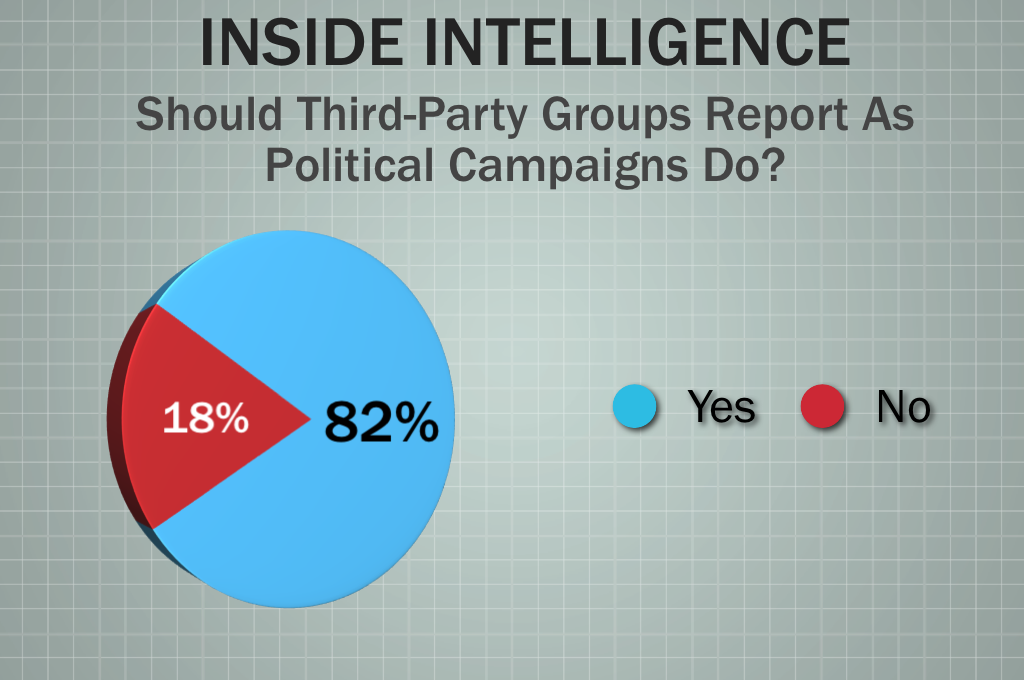 Should third parties doing 'educational' campaigns during election season have the same reporting requirements as candidates and other campaigns?

• "While I don't think it would make a difference in the outcome of elections, I think it would lead to better policy because Legislators would have 'enemy lists'."

• "Everything should be transparent and reported."

• "We should always know where our 'education' is coming from and who is paying for it."

• "I'm sure unions and trial lawyers who 'educate' the electorate would like to have the same reporting requirements as candidates and other campaigns."

• "Grass roots lobbying is not presently covered. The state would be well served by a limited organizational disclosure of the existence and purpose of these organizations and who runs them."

• "If the third party includes the name of a candidate in its educational campaign, then it should be subject to reporting requirements. Heck, I would go further and say third party 'educational' campaigns that include the names of candidates in its 'educational' activities should not be eligible for tax exemptions."

• "No the right to petition the government and engage in political speech should not be burdened by reporting requirements."

• "The NAACP conducted ''educational campaigns'' and the powers that be in Alabama demanded that they disclose their membership lists. The NAACP refused, and the Supreme Court correctly recognized that citizens have a right to associate free from intimidation and reprisal. See NAACP v. Alabama (357 U.S. 449). Should Hamilton, Madison, and Jay have been forced to submit to 'reporting requirements' when writing the Federalist Papers?"

• "This is a GREAT idea, since I was kind of tired of that stuffy 1st Amendment thing anyway."